Here is a little re-tread - a posting from the first October I was blogging, in 2006.

The lovely line of golden pear trees has been removed by the farmer, and so it is now just a memory, but it seems that that is what this posting was about in great part - memories. 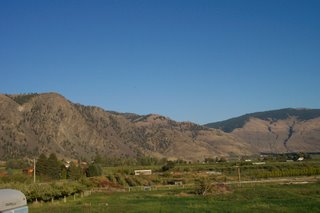 O suns and skies and clouds of June,

And flowers of June together, 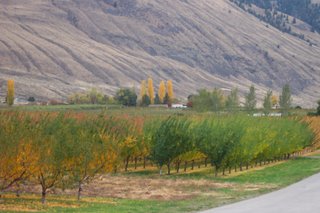 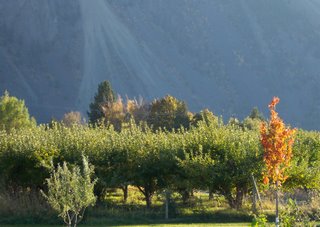 In this case it is a Sunset Maple, but just below us is a straight line of pears, which reach like golden torches to the sky. 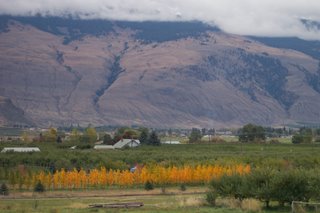 Many years ago, in the 1960’s and 70’s, we owned the orchard just across the highway from the land these trees stand on. At its eastern end was a block of magnificent old pear trees, and I remember one autumn in particular when the leaves on these trees turned golden, scarlet, subtle and luminous shades of green, soft yellows and glowing earth tones. What a gorgeous tapestry it was.

We pastured sheep amongst the trees on this property. The apple trees were old, - gnarled

Macintosh and red and striped Delicious. It was more like a park than an orchard. The sheep cropped the grass and lent a pastoral air to the land.

The sheep were a family enterprise, - everybody participated, right down to the littlest ones feeding the occasional orphan lambs with bottles. But the Shepherd and the Shepherd’s Border Collie, Candy, were the ones who had most rapport with the flock. Candy arrived in the Shepherd’s pocket one day, to the children’s delight. The Shepherd trained her well, and they made an extraordinary team.

At one time we had four hundred ewes, and lambing time was a mixture of pleasurable anticipation, as we picked out the ewes who were liable to lamb that night by observing them at feeding time, and intense maternity activity in the hours to follow. The Shepherd calmed the sheep, just by walking into the barn and speaking to them, and Candy kept vigil at the door.

The flock were not the most profitable venture, but we had some sheep all the time we were on the farm, and they were the part of farming that brought us the most satisfaction and delight. And sometimes frustration. I have a cameo of trying to herd a recalcitrant ewe back to where she belonged without the help of the dog, tears and rage vying for dominance..

Eventually we planted rutabagas as a ground crop, - seven miles of rutabagas, - up one row and down the next. It was a labour intensive operation, but it was also a time of free spirits and “hippies” who turned their backs on established lives and sought the wonders and adventures of the open road. A lot of them found their way to us, and in particular a University Art Professor who had chosen the alternate style of living, and seemed to be a mentor to all the young people who traveled with him. We learned a lot from these people, and grew especially fond of some of them. Some of our children were at a vulnerable age, and took to smoking the funny cigarettes that were so prevalent at the time and contributed so much to the way of life. It is hard to judge the ambivalent influence these children of the New Age had on our family, but they came back year after year and were a great help to us.

Our farm ran parallel to the highway, and it was not hard to judge the influence the topless turnip workers had on the community driving by!!!!

Beautiful pictures of the fall foliage.

What wonderful writing! I usually just pop in to see your SkyWatch photos, and now see what I have been missing by not reading your other posts. Since 2006! - I have many to catch up on!