Trinity Sunday, and in Church this morning the Old Testament Reading was the first chapter of Genesis, - an account of the Six Days of Creation, beautifully read in a way which seduced one's attention and imagination.

At home, over lunch, Husband and I expressed curiosity about the person(s) who wrote the gorgeous lyrical language used in the Bible, (the King Jame's version, that is ) and most especially in the Old Testament.

No matter what your belief how can you not be moved by this wonderful expressive story of creation.

...and God called the light Day, and the darkness he called Night. And the evening and the morning were the first day.

Our discussion sent me searching and I found online Two Stories of Creation by Doug Linder.

The first, told about three thousand years ago around the campfires of Jewish desert dwellers in what is probably present day southern Israel, the story of The Creator, forming man and breathing life into him. It is followed by the tragic tale of Eden. The name of the creator god was "Elohim".

The second story, more ancient than the first, used a Judean term, "YHWH" (Jehovah) to describe its deity.

Four or five centuries later, in what is most likely present day Iraq, a remarkable Jewish writer (name unknown) began to write a primary history of his people, hoping that it would help the people endure the many trials they were undergoing.

He wove the two texts together, and the story he wrote is a 'compelling' one. He opened his history with a creation story as found in the first book of Genesis, - the reading which I found so moving this morning. This chapter ends with the creation of mankind - the first man, Adam, and the first woman, Eve. But wait, - this is Eve who was created by the god YHWH from the rib of the first man, Adam.

There is another 'scientific Eve' who has slid into the story, as a result of amazingly advanced research.....

Now, however, it has almost universal acceptance, and in turn the discovery of mitrochondrial bacteria has led to the marvels of a DNA which connects all of humanity from the time when the first male and female bacteria energized within a Eukaryotic Cell to eventually recreate.

Because the Mitrochondrial is passed down the centuries only through the mother some years ago researchers used computers to analyze samples of DNA drawn from 135 diverse women from all over the globe, and discovered that the family trees of these women all led back to Africa. In the process they discovered that genetic differences within Africa are twice as great as the differences between all other populations, suggesting that we are all descended from a small band of humans that left Africa perhaps 80,000 years ago. The root of the mitochondrial trees seems to lie in the northwestern Kalahai Desert in southern Africa, - the true home of Mitrochondrial Eve.

Dr. Margulis's discoveries are truly amazing, and I am still in awe of the advances in science that make this possible when I comment that this is the "discovery" of these marvelous primeval mysteries that seem to point to the beginning of life. They are not the "creation" of the bacteria in question, and we are left to wonder if Dr. Margulis is recording a chance event, or if The Origins of the Eukaryotic Cell is a highly intelligent technical journal of the allegorical Six Day Story of Creation as found in Genesis.

I ponder the connection between all these creation stories, and I wonder if the Eukaryotic theory
will ever inspire the music, the sculpture, the paintings and art that the ancient wildly romantic story of creation has given to civilization.

And I study this 1984 mural created by Ruth Dusckworth, showing God in the middle, and the unformed universe developing into images of the heavens, the waters, the mountains, the living creatures, and finally humankind........... 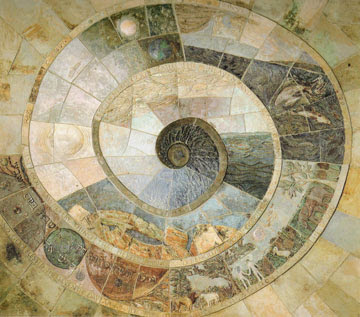 and I know that although my intellect recognizes and accepts the Margulis theory, my heart clings to the beautiful old stories and their primitive interpretation of mankind's imaginative wonderings and the beginning of the journey towards the discovery of Eukaryotic.

The danger, I feel, lies in the inherent arrogance of man in ignoring the wonders of creation while denying the design and the Designer.