Depending upon what the Boob Tube has to offer, and whether it keeps Husband's attention at the qui vie and his eyes wide open, the time for opening the Card Game/Cabaret around the dining room table varies. It could be 9:00- it could be 10:00 - or it could be even later. Nevertheless, when the curtain goes up and the cards are shuffled all actors are on tip-toe, - ready for the show.

Age has robbed us of all our bridge partners, so Husband and I are reduced to playing Kings in the Corner as a prelude to sleep.

This is a fairly simple game that two can transform into a devious and crafty challenge - as a matter of fact Husband is so devious and crafty that his actions border ever so slightly on cheating. Certainly on ignoring the rules as explained to us by Daughter (who, it must be admitted, was not too sure of the hard and fast rules. Having learned the game from someone equally as devious and crafty as Husband)

In self defense I have had to adopt some of Husband's tactics. It makes for an interesting late evening activity, - designed to soothe one into dreamland. 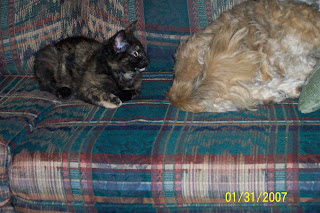 Not to be outdone, Calico and the Straight Guy spend the early evening snoozing so that they will be in good form to provide the Cabaret act.

The minute the first move is made towards the card table the Straight Guy is there beside me with his neon tennis ball, talking a blue streak in his own inimitable way and indicating it is time to start lobbing it down the hallway towards the bedroom. 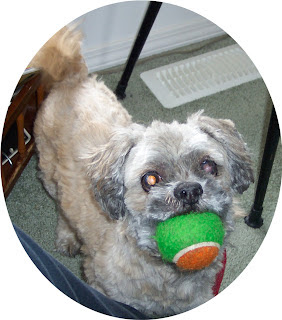 In the meantime Miss Calico has come awake and is honing her claws for her trapeze act, performed on the backs of the dining room chairs and at mid height around the whole area surrounding the scene of the card game. She flys with wild abandon from one perch to the next, startling herself with foolish embarrassment when she lands on the piano keys. Eventually she settles on the back of a straight chair, balanced on all four paws. 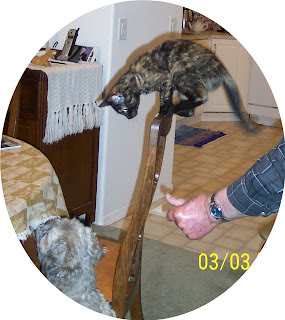 This is the pose which precedes the main act, where she lays across the top of the chair on her tummy, - head on one side and tail on the other. The trick is to insert the paw through the opening in the chair back, clutching at her tail (which just won't stay still) and I think if she could ever manage this movement with success she would then do somersaults around the top of the chair. 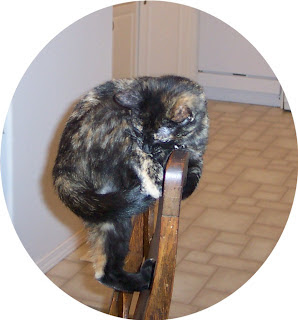 If this has ever happened it has not yet been captured on film. However, even the attempt can keep her amused for a good long while. The Straight Guy looks on with amazement, having given up the Ball Game to indulge himself in watching the Aerial Cat perform. 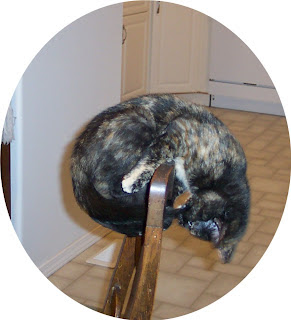 Meanwhile, back where the cards are being used as instruments of frustration, the Grown Ups enjoy the show whilst trying to outdo one another in craftiness (a euphemism if ever I heard one!)

Drop in one of these evenings and join the fun - open until all hours!

Labels: Come to the Cabaret

The Comic Team of Caspar and Calico


featuring Calico, the Aerial Cat
and Caspar, whose main claim to fame is in being the Straight Guy 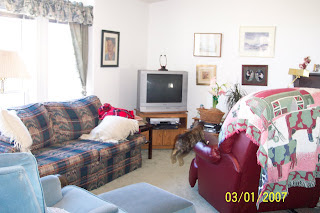 So here we have Miss Calico, in full flight, landing on the Master's Chair. 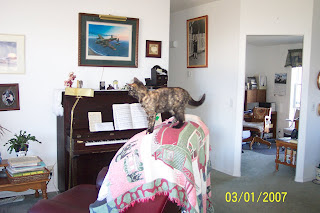 She scouts the territory, - perches at the top in watchful attack position and waits, coiled and poised - ready to leap!

Not terribly well camouflaged, but that's of no never mind - the Straight Guy is old and doesn't see too well. 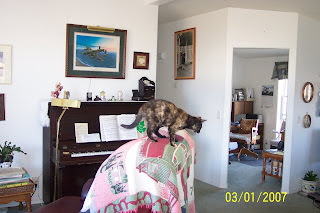 Besides, - his eye is on the ball, which he has inveigled the Master to throw for him. 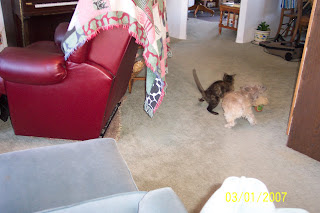 The leap is made , - the Straight Guy, surprised and confused by this sudden attack, gropes for the ball. 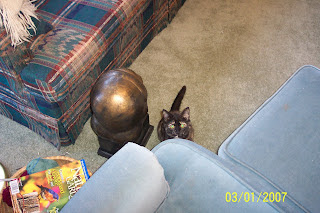 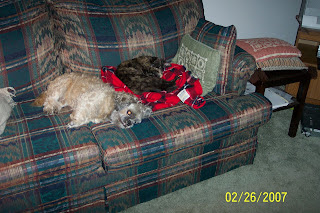 In the meantime a short snooze, back to back, on the love seat.


The objects of our affection, - their performances are spontaneous and entertaining.

They bring laughter to our lives and we just love them all to bits!!! God bless them.
Posted by Hildred at 6:44 PM No comments: 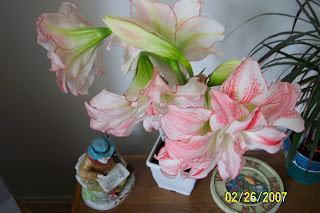 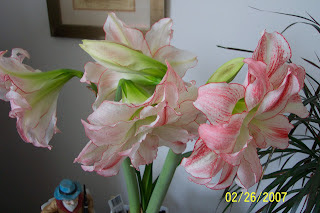 Sharing the beauty of the Hippeastrum Philadelphia Amaryllis. That wot helps to get me through these gloomy days of February.

The willow trees are turning golden, but still the wind is bitter and the valley is shrouded with cloud most mornings.

I remember a ditty from my young days on the prairies when Spring was not expected in February, and we didn't get antsy about it until April.

It's all a myth. Winter will stay
Rock-bound forever and a day,
Despite what calendars may say.

And if today the air seems mild
I'm not, I swear, one whit bequiled -
Tomorrow new snow will be swirling wild.

I've stopped my wistful wondering
I'm quite convinced there's no such thing
As Spring!"

Not time yet to be so despairing of its late arrival in this desert clime, - but soon! soon!

We planted potatoes on the 4th of March in the spring of 1988, and with great enthusiam.

Labels: A picture and a ditty
Newer Posts Older Posts Home
Subscribe to: Posts (Atom)
"Thou knowest not what a day may bring forth." —Proverbs