A year or two ago one of my lovely granddaughters gave me a Journal of such beauty, and filled with such meaningful quotations that I have resisted using it because nothing I think I might use it for seems to match the beauty of the pages.

However I do keep it close at hand and occasionally I leaf through it and become very inspired by some of the quotes, such as this one by Thomas a Kempis

"Love is a great thing, a great good in every way
it alone lightens what is heavy and leads smoothly
over all roughness" 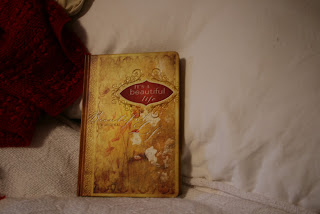 I would remember this when I grow impatient and search for the grace to be loving instead of miserable and cranky.  Cranky and Grumpy - a couple of curmudgeons that blow steadily at the candle of love that lightens the days and brings pleasure to the hours, especially as one ages.

Annie Sullivan says "You can't touch love, but you can feel the sweetness it pours into everything."

Not to change the subject, but here, on this page, is a little humour in an observation by John Stephen Strange.. 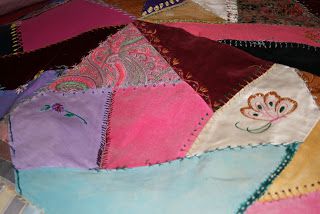 "Adaptable as human beings are and have to be
I sometimes sympathize with the chameleon who
had a nervous breakdown on a patchwork quilt...."

Laughter goes hand in hand with Love, and this little book contains both, so perhaps it is time I started to use it.

I have been neglecting my little pile of "Small Stones" that capture beauty in a few lovely, smooth words.

Is this maybe what these pages are meant to record?
Posted by Hildred at 9:00 PM 2 comments:

Friday, the 13th of April 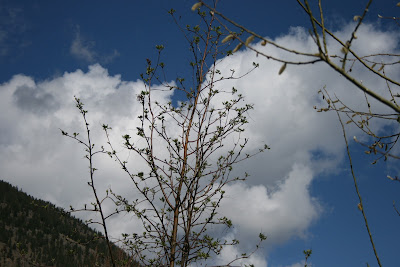 The sun shines, the sky is blue.  I see through the window that the catkins are leaving the hazelnut tree, off in search of those small red female catkins I presume.  Busy ensuring a good crop of hazelnuts in the fall, which pleases me greatly.

The lilac buds are swelling.  I look forward to their wonderful fragrance in May - something we haven't had since we left the Lost Garden on Tenth, as the lilac we planted on the hill just sulked for five years and only had two or three blooms in all that time. 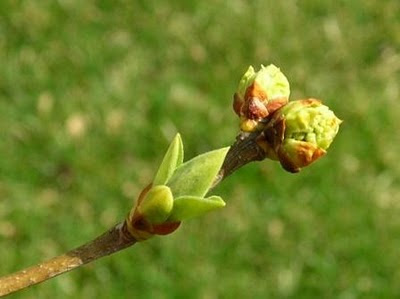 I have been out planting grass seeds in the little bed that lies smack in the middle of the front handkerchief lawn.  Vincent leveled it off and prepared it for seeding before he left for home on the Meadow, so I spread the seed, covered it with fine soil, tramped it lightly with my clogs and spoke sharply to the little birds about getting into the cookie jar, so to speak. 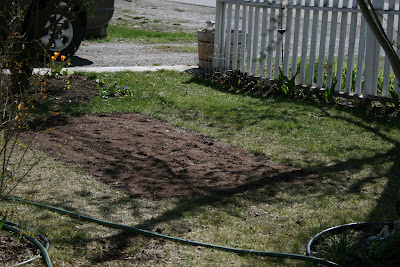 The maple and the willow that shade the front lawn are both taking advantage of the nighttime showers and the daytime sun and herald spring with tiny delicate leaves and winged seeds on the maple that grow longer and more elegant each day. 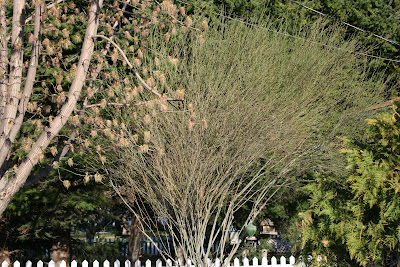 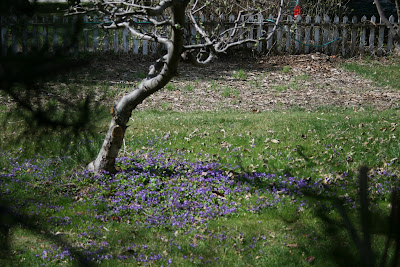 and over the fence, to the east, the apricot tree is starting to bloom 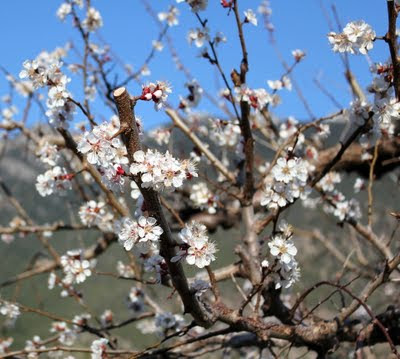 Gardening in town is not spectacular but, as always, it touches the heart
and at the end of the day one must always smell of glorious rich dirt!

I am going out now to plant the remnants of the indoor spring bulbs that made waiting for spring bearable.

And to find the perfect spot for the amaryllis bulbs to summer-over.

And, here, too is an excerpt from A.E. Housman's Spring Morning


Star and coronal and bell
April underfoot renews
And the hope of man, as well
Flowers among the morning dews.


Now the old come out to look.
Winter past and winter's pains.
How the sky in pool and brook
Glitters on the grassy plains.


Easily the gentle air
Wafts the turning season on;
Things to comfort them are there
though 'tis true the best are gone....


It seems to me especially meaningful and relevant.

The letter is M 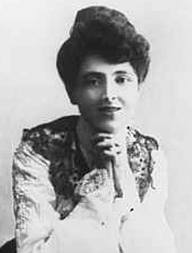 Have you read Anne of Green Gables?

then surely you have heard of it.....

"Matthew Cuthbert has gone to the train station to pick up the little boy he and his kind-hearted sister, Marilla Cuthbert, owners of Green Gables farm, adopted from the Halifax orphanage.  But what he finds is a precocious little red-haired girl named Anne Shirley, with a cheery disposition and some profound thoughts to share.  Anne soon became best friends with Diana Wright, and although Gilbert Blythe can be a pest at times, he too becomes a loyal friend.  Anne wins the hearts of many and has continued to attract readers of all ages and touch the hearts of millions of fans world-wide.

The story of Anne, of Green Gables and of Prince Edward Island is heart warming.

Lucy Maude Montgomery used the home of her grandparents, where she lived as a child
as a model for 'Green Gables", and it still continues to attract tourist from all over the world who yearn to see the country that Anne drew their hearts to. 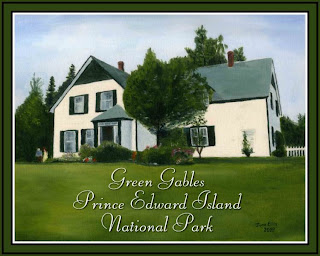 When I visited P.E.I. some thirty years ago, researching the marketing of lambs, I was so entranced with the country side, the sea, the red earth, the potato crops, lobster dinners and the wonderful bed and breakfast where we stayed I wanted immediately to phone Charles and say, "Pack up and come quickly!!!"

Come, rest awhile and let us idly stray
in glimmering valley, cool and far away.

Come from the greedy mart, the troubled street
and listen to the music, faint and sweet.

That echoes ever to a listening ear
Unheard by those who will not pause to hear.

One step aside and dewy buds unclose
The sweetness of the violet and the rose.

Song and romance still linger in the green,
Emblossomed ways by you so seldom seen,

And near at hand, would you but see them, lie
All lovely things beloved in days gone by.

You have forgotten what it is to smile
in your too busy life.  Come rest awhile.

For more Ms do visit here at ABC Wednesday, with thanks to Denise Nesbitt and her many merry helpers.
Posted by Hildred at 7:56 PM 17 comments: