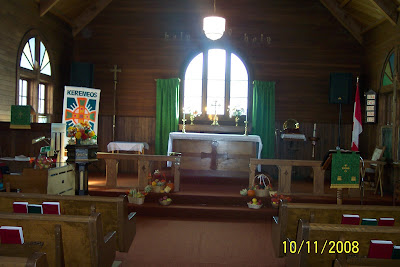 There was ice on the sprinkler lines this morning, but the sun came out and warmed things up a little - made it appear like a nice sunny day, but the nip was in the air....

After taking bucket's full of Chrysanthemums down to the church to mark Thanksgiving Husband and I got the car out, filled it with gas, and made our way to Osoyoos for the annual Donna Fishwick Ensemble Concert, given in honour of her century old father.

Here are the participants in a Palace in Prague this summer, - photographed on their European Tour. 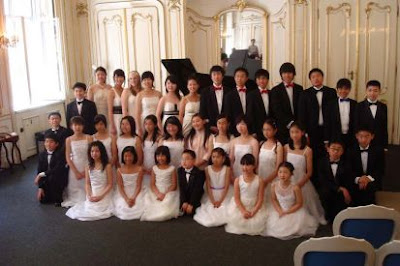 And today, they arrived in their classy red bus and gave an amazing performance in the Osoyoos United Church.

Getting composed for the picture.... 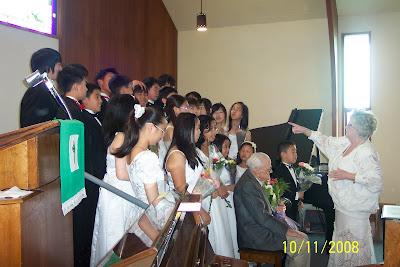 And now more or less ready for the photo op - so many of their parents were there and anxious for pictures... The guest of honour at the front. 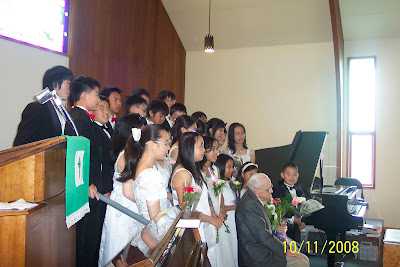 A wonderful musical experience, and to share a part of it with you.....

There was a little nostalgia involved with this concert as well, - when Donna first began to teach she had a few pupils, - amongst them some of our own children. And myself..... I listened to Maggie Li playing the second and third movements of the Pathetique today, and I was moved almost to tears as my mind and my fingers followed her lovely rendition of the Cantabile second movement.

We came home in the sunshine. I, desperately trying to catch a few snapshots out the side window of the car, in between telephone poles. 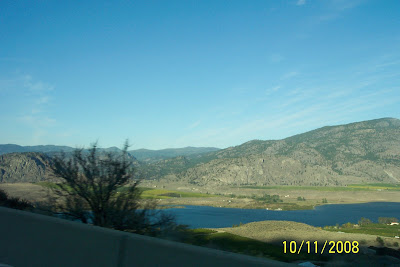 A very heart filling experience to start the Thanksgiving week-end - I marvel at the talent and enthusiasm of these young people, and the easy way they have about them as they perform. And I am so delighted and amazed at what Donna has accomplished since she was part of our lives so many years ago.
Posted by Hildred at 9:17 PM No comments: 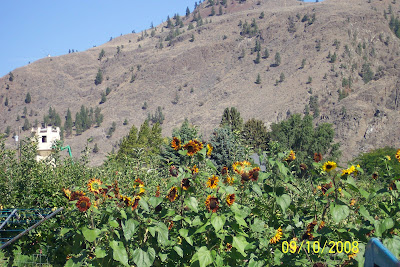 This was the designated day for starting to put the garden to bed....

We started with harvesting the Sunflowers.

Husband wielded the clippers and I made great long piles to be hauled away behind his cart, down along the fence where the quail and the small birds can feed on them. And we can watch from the front window.

There were only a few blooms left, after such a splendid summer display. These I rescued, hoping that they will still be fresh on Saturday to contribute a bright spot to the Thanksgiving decorations in the Church. 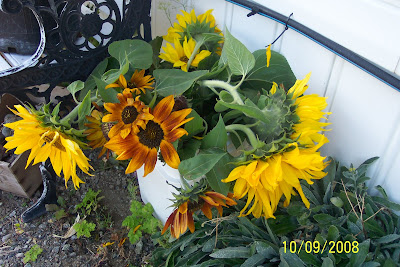 We stopped to have a cup of coffee and catch our second wind. Then Husband went off with the little old dog to finish the haircut that has been going on in stages for the last three days.

I went down the garden path to start the preparations for the long sleep......

Behold, there was a riotous party in full swing!

The Chrysanthemums were just arriving, dressing as they looked around to see what everyone else was wearing. 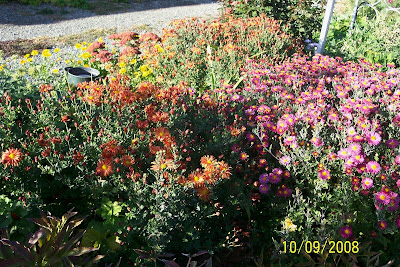 One beautiful delicate Abraham Darby rose was languishing up the pathway, - the rest of her sisters, having retired from blooming, were busy making lovely red rose hips. 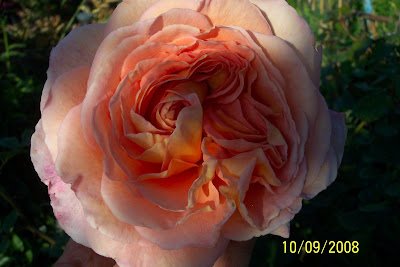 The Shasta Daisies were bandbox fresh, after their short rest from a midsummer frenzy. 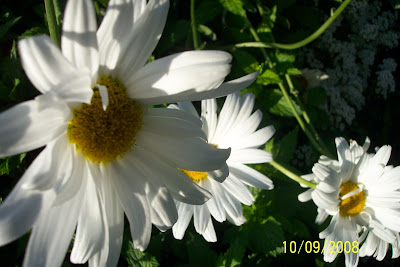 Looking on from the sidelines a sprightly uninvited guest, and at the feet of this colourful sumac tree a little bevy of adoring marigolds. 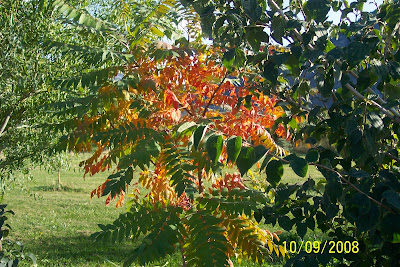 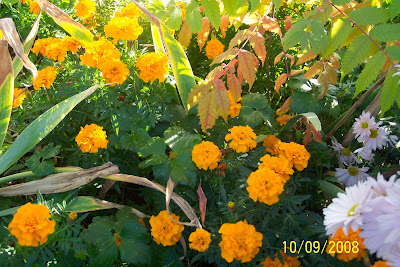 The newly planted 'grocery store' roses, tiny but so exuberant, blushing with pleasure as I commented on how well they had done since they left the grocery store shelf. 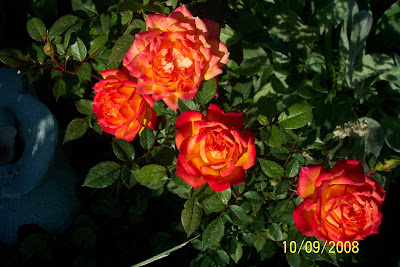 A few crimson roses were climbing the wall, - a little droopy, but still game, and not looking too disheveled... 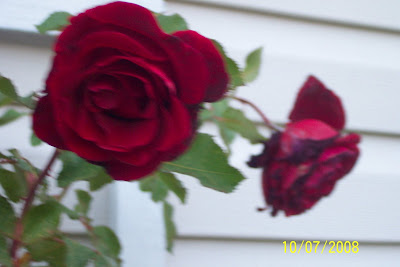 Over in the small narrow bed by the trailer two dainty poppies were still upright, twirling their diaphanous petals while one of the musician grasshoppers took a break on a nearby leaf, weary of rubbing his back legs together to make merry music. 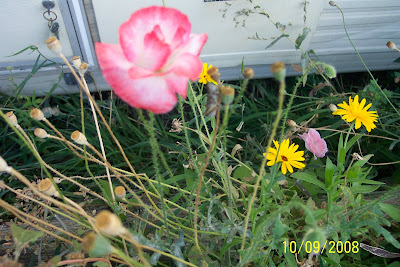 A cluster of wild flowers flirted outrageously with some visiting bees.... 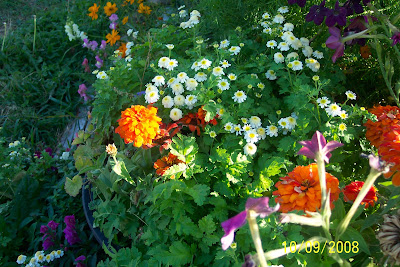 And prettiest of all were the pot marigolds which lend sunshine in dozens of places in the garden, - real party-goers who turn up early and stay until the last dog is hung! 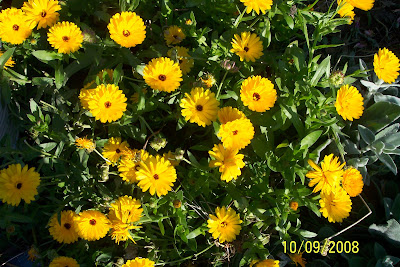 As I meandered down the path, pondering about where to start, I began to hear faint whisperings....

Oh, alright, I sighed, - just don't wake the iris or the oriental poppies, or you'll never get to bed!!

And the Band Played On. 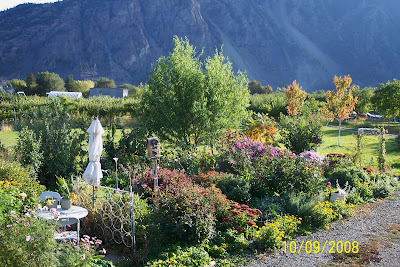 Posted by Hildred at 7:15 PM No comments: 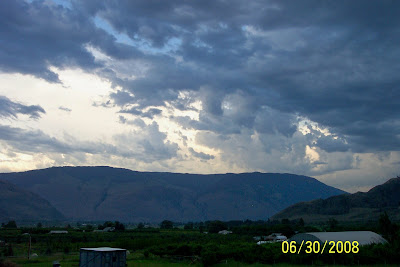 The number of people who lived through The Great Depression is steadily diminishing. Age is wearying them, but they stay steadfast in their memories.

I read Michael Bliss Professor Emeritus at Toronto University and his comments on our financial history from the 1930's to the present. I nod my head in affirmation and shake it in sorrow and disbelief that we should so soon forget the lessons of frugality and self discipline that were taught us in the Dirty Thirties. And in forgetting have once again arrived at the brink....

I remember my Grandmother's gate, just a few blocks from the railroad tracks in Calgary, marked as a good place for a meal. And I remember trips to the farm, laden with necessities to help the family there cope from day to day and month to month.

I remember my mother, around paycheck time, asking my father 'did the eagle fly today'? Payday time was tremulous - it depended on any number of iffy circumstances.

I remember the Rector at St. Faith's in Edmonton, nourishing his parishioners not only with spiritual hope, but also with a roast or a bag of coal. And his wife, visiting each afternoon with Eccles cakes and words of hope.

I remember when bread was five cents a loaf, and my sister trekked across the field to go to the store for Daisy White Bread.

My husband tells me of his older brothers' difficulties during that time of hardship, and of the March of the Unemployed which was dispersed at Regina.

But also I remember the sense of community and neighbourliness. The closeness in the church - the self reliance and yet the knowledge that we were all in this together, and that if we wore hand-me-downs probably most of our friends did also, so it was no big thing. There was a mindfulness of the strength of family that seems to be lacking today.

I remember the pleasure we got from small things and the ability to find satisfaction in whatever was available to us. This perception of life stood us in good stead in our early married life when we struggled to establish ourselves on the land.

From the memories of Laura C. Rinfret......
"Riding the rails was a rite of passage for a generation of young people and profoundly shaped the rest of their lives. Self-reliance, compassion, frugality, a love of freedom and country are at the heart of the lessons they learned. Their memories are a mixture of nostalgia and pain; their late musings still tinged with the fear of going broke again. At journey's end, the resiliency of these survivors is a testament to the indomitable strength of the human spirit."

We have forgotten the lessons, but hopefully 'the indomitable strength of the human spirit' still remains the same, and if we must put aside the idea that it is possible to attain everything we yearn for, perhaps the same old fashioned ideas of simple living within our means, self reliance, honesty and the importance of family will be a silver lining to the dark clouds that beset us financially.
Posted by Hildred at 9:07 PM 1 comment:

A jolly drive this afternoon, made even more pleasant by the accompaniment of 'Nola'.

Straight from the camera to you. The colours this year are not as spectacular as they were last year, - I remember how truly amazing they were then, and how often we remarked on it. Nevertheless, we enjoyed the richness and the lovely clear fall air.