The House of Falling Canes...

Charles has a great variety of canes.  Probably if you counted them all up, - the ones in use, the ones that looked elegant but weren't very practical, the old discarded ones and the home made sticks - well, there must be at least a dozen!!!

I have now accumulated two.  The Butterfly cane and the one that folds up and disappears into my purse.

Charles feels quite proprietory about the business of canes, having had a much wider experience than I and being much more dextrous with them, both walking and picking them up....because alas, each and every cane has a mind of its own, and when it doesn't feel like resting in the spot you placed it when you sat down it promptly falls over, lying lengthwise on the floor, or, if it is feeling particularly mischievous it can sometimes manage to slide under a couch or chair, in some unreachable spot.

Unreachable, that is, unless you have had the experience and expertise that Charles has accumulated.  Besides the canes he also has a number of picker-uppers, and if they aren't at hand he has developed a trick of picking up the recalcitrant cane with the other one he uses by pressing down on the end and bringing it to an upright position.

This damp and miserable weather we have been having for the last few weeks has caused my left hip to seize up when I sit.  It wasn't too bad at first.  I could stand alright, and then if I stayed in one spot and looked around at the pictures or continued talking to someone I was eventually able to get the whole operation in motion and glide off, albeit somewhat awkwardly.

Now, however, I require a cane to get up, and I cannot quite cover my distress at getting underway!

Charles' great experience puts him in a position of somewhat smug authority, and I am receiving all sorts of instructions and advice, - even to the point this morning when he suggested I might use a walker in the house...  A WALKER!!  I promised him I would try it :(

In the meantime if you hear a clatter, followed by a mild oath, you will know another cane has bit the dust.  I have considered storing them as a wind chime!

On a more cheerful note the delphiniums have started to bloom in the midst of the beautiful pink climbers that David so kindly untangled and put in their proper place yesterday..  I take this picture through the den window, - it rained all night and I don't want the canes out in the cold damp grass,  and besides they might trip me up going down the stairs. A bouquet of flowers from the garden 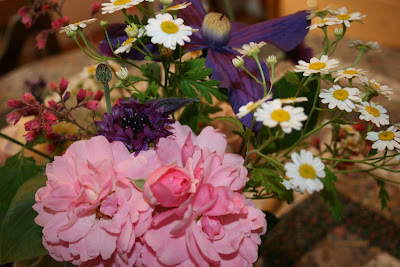 The letter this week is the Valiant V

In this post V stands for Suzanne Valadon, who was born Marie-Clementine Valadon to an unmarried laundress, Madeleine Valadron.  Her father was probably a young man who worked at a nearby mill in Bessines-sur-Gartempe, Haute-Vienne, France, and he was killed shortly after Marie-Clementine's birth.

Madeleine moved with her baby to Montmartre where she worked as a charwoman, and Marie-Clementine grew up very much on her own.  In her early teens she joined an acrobatic group but following a serious accident that nearly killed her she left the group and at 15 she went to the Place Pigalle in order to become an artist's model.

She was a beautiful young girl with 'cognac coloured' hair and stunning blue eyes, and she soon came to the attention of many of the artists of the day, including Purvis de Chavannes and Auguste Renoir.  It seemed the relationship between model and artist was a condition of life in Montmartre at that time, and Madeleine, at 17, became pregnant.

As a model for Renoir

Soon after the birth of her baby (Maurice) Valadon began to model for Toulouse-Lautrec who saw her drawings and encouraged her to change her name to Suzanne, a name that could be respected and remembered.  Lautrec advised her to take her drawings to Degas, who immediately recognized her talent, bought 17 of these drawings and hung them among his Cezannes, Gauguins and Van Goghs. 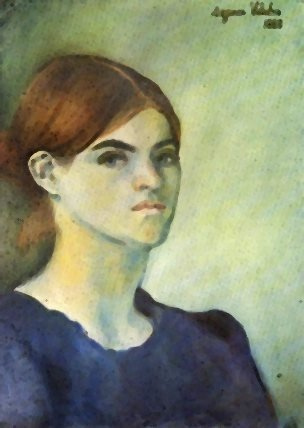 Suzanne Valadon had a complicated life.  Her son, Maurice Utrillo (of whom I wrote last week) caused her much sorrow and anxiety.  She was perhaps not the best of mothers, but she was a truly gifted artist who formed a style all her own. 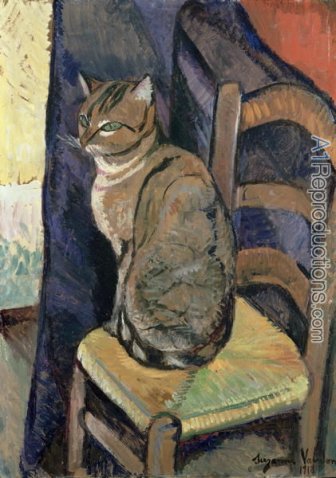 She is only now beginning to gain the respect she deserves as one of the great painters of the twentieth century and her work is exhibited in many of the finest museums and galleries throughout the world.

For more interesting Vs click here and visit ABC Wednesday with thanks to Mrs. Nesbitt and her valiant volunteers.


Hello sun in my face
Hello you who made
the morning and spread it
over the fields.

Watch, now, how I start
the day in happiness, in kindness.
Mary Oliver

I wake at five and turn over to look at the far hills we see through our wide bedroom window.

Too often,  lately,  there has been a fresh fall of snow lying in the crevasses and gently on the bosom of the hills (how's that for poetic!)

This morning the sun is shining brightly.  The shadows are long and the day is full of promise... 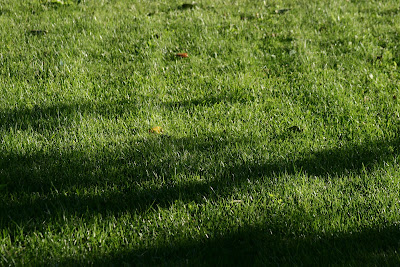 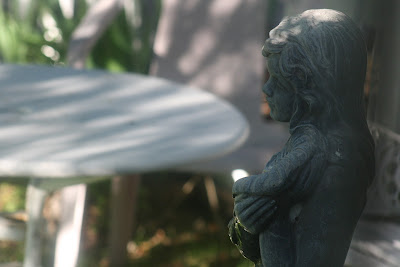 I rise to put the coffee on; stop at the computer and start this little post.  But the open door beckons to both me and Callie, the cat.  When I open it she will whizz through my legs and out the small cat door, immediately turning into a slinking sleuth, creeping along the length of the garden shed in the protection of the lilac tree on her quest to find out what creatures have invaded her garden during the night.

I will go and put the sprinkler on spots that have been under eves or protected from the rain and are even now dry, after all that cloudy weather last week.  Being in town we must abide by the watering regulations, - no sprinkling after 10 a.m., but that's alright.  I am likely to be seconded as apprentice carpenter, as Charles continues his ramp project in the back garden, and my gardening will be limited.  Well, it's limited anyway.  Easy to keep up to this small garden which I have refrained from turning into a domesticated jungle and which we can enjoy with a certain amount of serenity, - although I did see a small track portion of the Chinese Lantern Underground has followed us down and is busy establishing a new station, a new village branch line.  Such opportunities for expansion!!!!

I see that the Canterbury Bell has started to bloom,  - not the vivid blue, as it was last year in the garden on the hill, but a pristine white - hidden amongst the bachelor's buttons that have grown to an incredible height.  For bachelor's buttons, that is..... 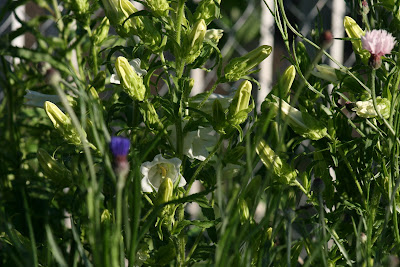 I check the progress of the sunflowers planted along the outside of the back fence, and note with approval that they are beginning to spring up towards the heavens, - and the barn flower I transplanted beside the compost bin has taken nicely.

There are a few quail trekking their way to Flo's place - the neighbour who feeds them kindly each morning.
The scout who watches over the contingent sits on the fence, but ignores Callie quite pointedly...... 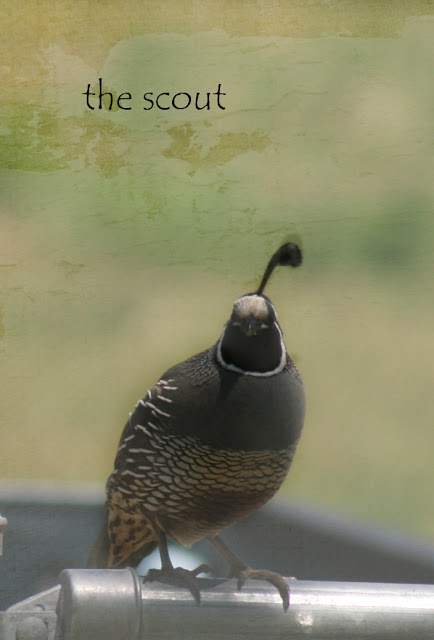 All's well and morning's at seven when Dorothy comes for coffee, so I will go to the kitchen and look forward today to the arrival of David and Nicola, come for a visit!!  Hugs all around......