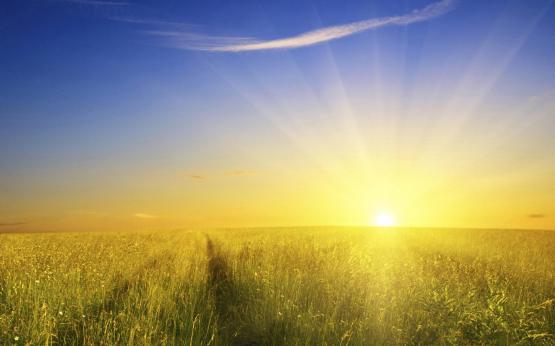 
I borrowed this from Sir Google - a Sunshine Wallpaper designed to lift your spirits
and make your computer screen glow!

I am considering pulling down the window blind and pretending I am in a little capsule of sunshine,
shutting out the dreary lowering sky.

And maybe even blowing up this wonderful summery picture to poster size
and attaching it to the inside of the blind.....

Here, in town, I thought about 'The Sunny Side of the Street'
and although there isn't any sunny side of the street
these dismal February days
I nevertheless started humming it - cheerily.

Here is Benny Goodman and his Jazz Sextet, with Peggy Lee
recorded on Christmas Eve, 1941

Does it make you smile?

This lovely Jasmine came to live with us on Valentine's Day 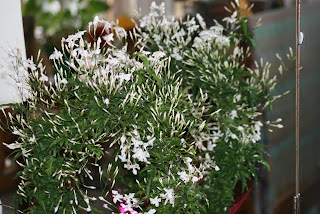 and as I pass the Jasmine its glorious summery scent wafts

me into the kitchen

I think these soulful  smells and  sights will have to suffice
until February decides to play host to blue skies and sunshine again.

I understand there are Robins in the vicinity!!!!!
Posted by Hildred at 2:27 PM 4 comments:

...and the letter this week is the Electable E


Goodness only knows we have enough news about U.S. Elections these days, but I'm not going to write about that today.

Today I'm going to tell you about Escargot, a favourite of our younger daughter.

Escargot is a dish of cooked land snails, usually served as an appetizer.  You have to be a little fussy about which land snails you choose to eat.  All species are equally edible, but many are too small to make it worthwhile to prepare and cook them.  Well, probably you aren't going to go out and gather your own snails, and will rely on the expensive can that is often on the top shelf of the canned fish section in the grocery store.

Or displayed on a table in more expensive and exclusive stores featuring fancy cuisine.

People have been eating snails for eons, - they have been found in archaeological excavations and in less primitive times the Romans, in particular, considered escargot to be an elite food, as noted in the writings of Pliny.  This information courtesy of Wikipedia.


You will be glad to hear that Wikipedia also tells me that the snails are purged of the questionable contents of their digestive system, killed, removed from their shells and cooked.  I will tell you about the cooking, but I thought you would be interested in the purging.  It is generally accomplished by a combination of fasting, or simply feeding them on a wholesome replacement, such as ground cereal.

If Escargot appeals to you here is a way of preparing them......

Preheat the oven to 450F.  Smush together some softened butter, - about 1/2 a cup, a smidgin of salt, some minced parsley and a clove of Garlic.

Stuff an escargot (which you are going to retrieve from that expensive can you bought) in a shell, (which can also be fairly expensive if you go to a fancy culinary equipment store to buy as many as you need).

Smother the escargot with garlic butter and splash a little liquor over the shells (whatever you find in the liquor cabinet, within reason, of course).  Put it in the oven for six or seven minutes.  The garlic butter melts and mixes with the liquor.  It is perfect for dipping with some lovely french bread. 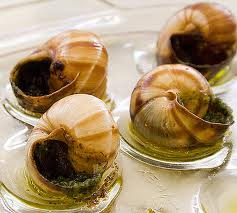 Some escargot, a little wine, - perfect for Valentine's Day.