It is Monday morning. We have finished breakfast and I am thinking of how I will fill the morning hours.... I glance at the wall calender where all the important stuff gets penciled in, and sigh with pleasure at its emptiness. No commitments until Thursday when we will go to the Optometrist.

It is our centarian (plus two) friend from Osoyoos, - can we come and visit tomorrow, - he sounds lonely and frail. Yes, we can do that, and it gets penciled in on the calendar. (Post scriptum - Charles took his tape recorder along and they had a lovely recorded interview about old times. Again, in the evening we went to the Shrove Tuesday pancake supper and sat with the local Cowboy Poet, gossiping and talking of rather more recent times - a nice day talking with two unique and interesting men)

Later in the morning the phone rings again. Can I put in a few hours at the Bargain Centre on Wednesday? Yes, I have no excuse not to do that!

On Tuesday the phone rings once more, - it is Charles' physio, - as long as we are going to be in Penticton on Thursday could we meet him at noon to look at various medical things that Veterans' Affairs is recommending he have. Yes, we can leave early and do that too....

Hmmm, - there is always Friday to luxuriate in idleness. But as a result of our visit to the Medical Suppliers one of their installers arrived during the morning to attach a seat extender in Charles' bathroom. It is so HIGH! When he had gone I lifted the lid, looked into the cavernous depths and called - 'Halloooo'. There was a faint echo resounding around the bowl. Best to keep the small great-grandchildren away from this facility, - if they were to fall in they might never climb out!

I digress, - when the M.S. man had gone we had a cup of coffee and then I went out to fill the bird feeders and when that was finished my eye fell upon the garden and the sad state it was in with old dry stalks covering all the tender leaves and bulbs that are at that stage that causes the heart to come all over faint at the thoughts of spring. It was an exhilarating time amongst the plants, so much so that I staggered in to lunch with dried seeds in my hair and the thoughts of getting lunch ready decidedly discouraging. Until I thought about peanut butter and honey sandwiches!

Mid afternoon Charles put on his good jacket and went out and revved up his vintage truck, and off we went to get the mail and take a few pictures. Some of which I show you below. It was a beautiful sunny day, - deliciously warm, and definitely speaking of spring.

The creek, with the willows glowing and lining its banks,
a wonderful foil for the naples yellow grasses. 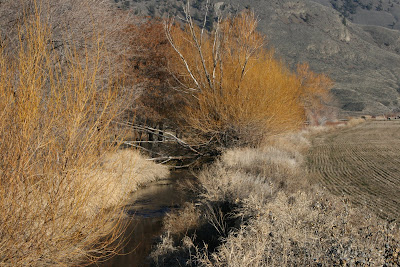 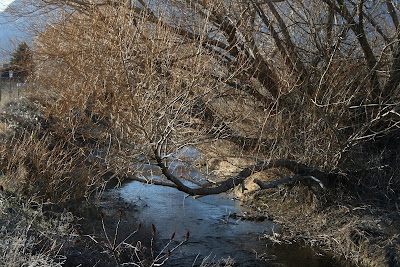 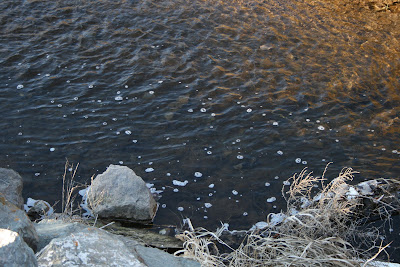 Down at the town end of Ginty's Pond the still waters reflect mountains and trees and banks. 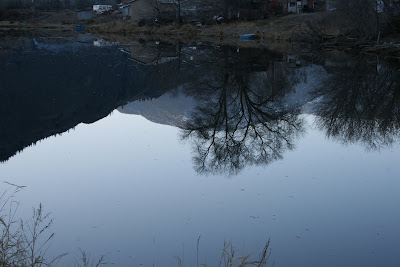 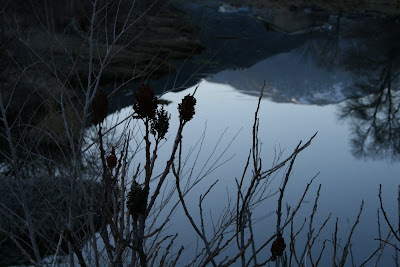 While at the other end of the Pond dead bullrushes clog the waterways in all but a few spots where two drakes and a duck were enjoying a late afternoon dip. 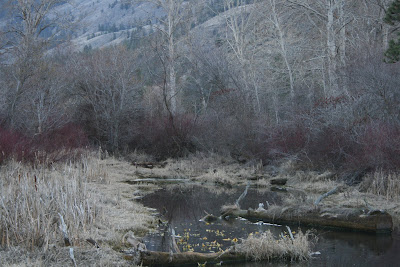 We came upon a wooded area at the side of the road where someone was 'park' logging, Charles called it. Clearing out the underbrush so that the great tall trees could shade an open area. 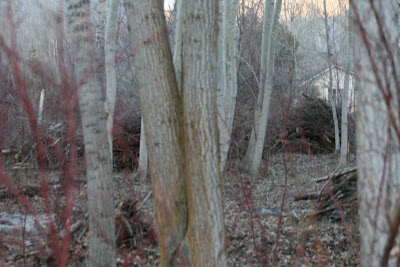 I held the camera out of the window and aimed it skyward at the top of those beautiful trees. 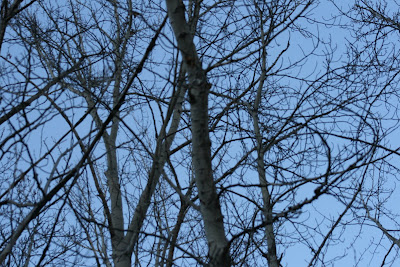 We came home to a pink glow along the ridge of the Cawston Basin and a nice pot roast in the oven. 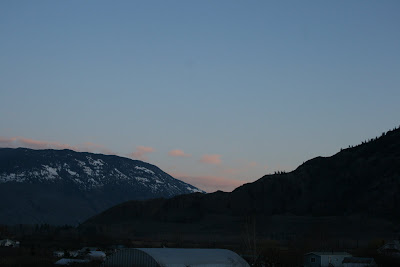 Next week has just one birthday celebration, and the weatherman says it will be good gardening weather!
Posted by Hildred at 8:08 PM 5 comments:

How the blue grew this week in the Similkameen

Oh, Monday, an interesting sky, but hardly worth talking about where 'blue' is concerned. 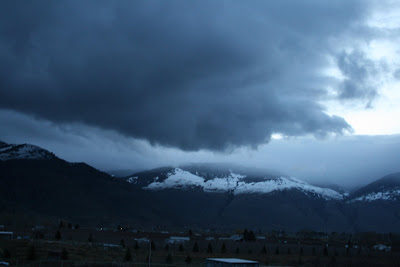 Tuesday made a little more effort, and in the afternoon the sky to the west made a nice background for the walnut trees. 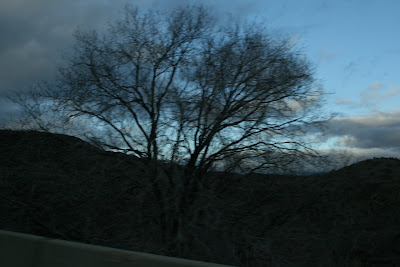 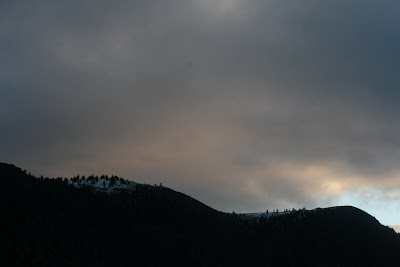 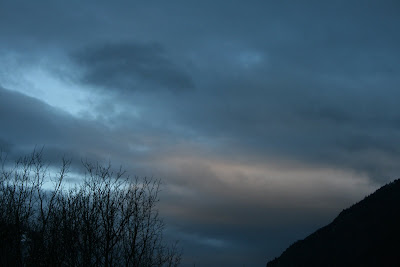 But Thursday the sun finally claimed the day for his own, and on our way to Penticton contrails criss-crossed the lovely blue sky, and the snow covered hills glistened against a forget-me-not background. 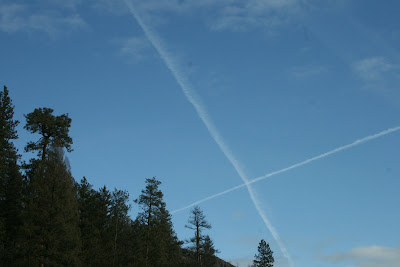 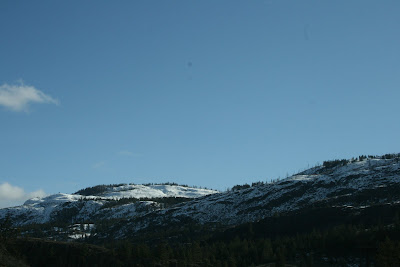 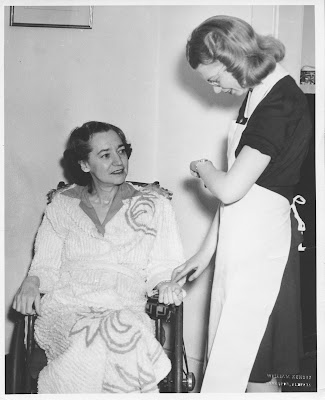 Life is eternal and love is immortal;
And death is only a horizon,
And a horizon is
nothing save the limit of our sight. - Rossiter W. Raymond

E is for Eventide 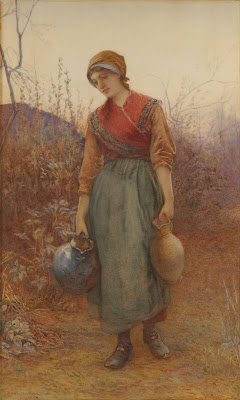 The day is past and the toilers cease;
The land grows dim 'mid the shadows grey,
And hearts are glad, for the dark brings peace
At the close of day.

Each weary toiler, with lingering pace,
As he homeward turns, with the long day done,
Looks out to the west, with the light on his face
Of the setting sun.

Yet some see not (with their sin-dimmed eyes)
The promise of rest in the fading light;
But the clouds loom dark in the angry skies
At the fall of night.

And some see only a golden sky
Where the elms their welcoming arms stretch wide
To the calling rooks, as they homeward fly
At the eventide.

It speaks of peace that comes after strife,
Of the rest He sends to the hearts He tried,
Of the calm that follows the stormiest life --
God's eventide. 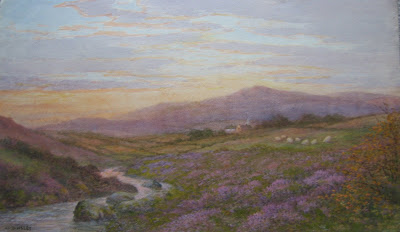 A painting by H.H. Bingley. 'The Peace that Comes at Eventide' - Sunset over Dartmouth, Devonshire.


More interpretations of E here at ABC Wednesday thanks to Mrs. Nesbitt and her kind helpers.
Posted by Hildred at 9:45 PM 13 comments: