When I waken in the night and the dark cloud of worry descends what is it that causes me the most dismay???

It's STUFF - all the STUFF we accumulated in almost seventy years of marriage,

Starting with just our wedding presents, my trousseau and Charles' uniform, and look what I have arrived with!!  My darling chickened out on this one...... 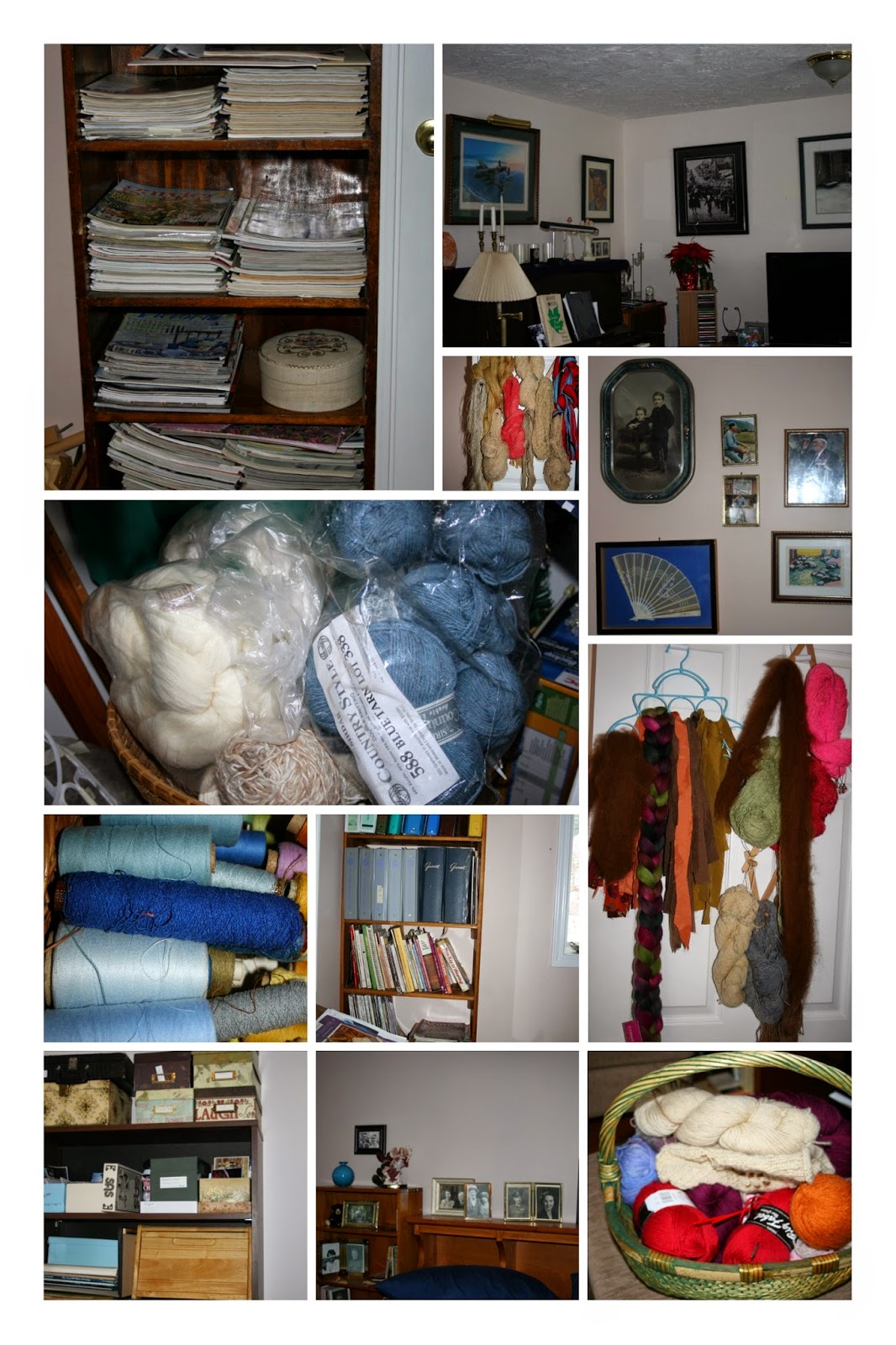 Just a small birds-eye view of the shelves of genealogy information, baskets of wool, pictures on the wall, pictures in boxes because there is no more room on the walls, remnants of cones of weaving cotton, warps and spinning fibres, thirty years of Handwoven and Spin-Off magazines, to say nothing of the Knitting mags that are my passion and folly.

And then there are the files, the music tapes, the DVDs and VSRs, the CDs, purchased and homemade - hundreds of them (it seems) - and the BOOKS!!!  And the snapshots!  Oh, thousands of them,  neatly divided chronologically into families, waiting to be dispersed.

To say nothing of the china and the silver plates and teasets we received as wedding gifts, there being no electrical appliances on the market yet after the war.

And so I am 'on a mission' to simplify.

I started with the books, - gathered up a great box full and a smaller box full of books that I thought others would enjoy and that I will probably never read again, - books that arrived on a whim because they had an inviting cover and books that really have no relevancy to my way of life right now.....(Milton Cross's Complete Stories of the Opera which I purchased from a book club even before I was married).

I put the boxes out in plain view and family bookworms came and inspected them and now I only have a bagful left!!!!

Most days in January have found us in an inverted bowl of fog and mist, so this is a good project, but today I must venture out to the bank and the grocery store and renew my supply of Orange Brandy!
And go to the Church to do the Pew Bulletins for tomorrow's service.

As I go I am planning to dig around in the snow to see how the Hellebores are doing, and if they are sending up little green stubs to bloom in Lent.....
Posted by Hildred at 10:15 AM 6 comments:

ABC Wednesday
The letter is B
for Brulee, - the Creme de variety!! 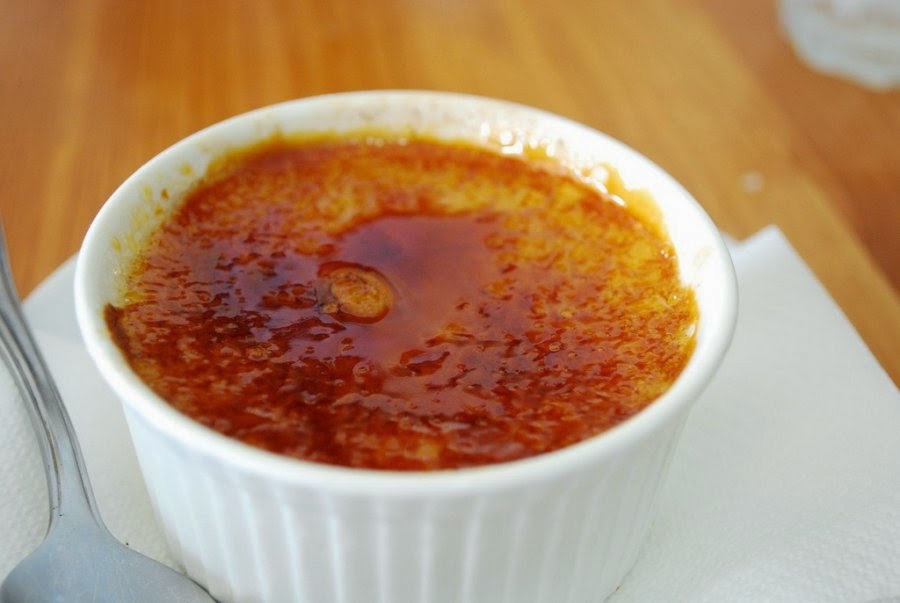 Dining is never really complete for me without a sweet and coffee to round it off,

and the dessert that fills me with delight (anticipation and the actually devouring of!) is

Wikipedia tells me (if I must get technical about such a delicious culinary treat) that the earliest known reference to creme brulee as it is known today appears in Massialot's 1691 cookbook, and the French name was used in the English translation of this book, but in the 1731 edition it was called "creme anglaise".


In Britain a version of creme brulee was known locally as Trinity Cream, or Cambridge burnt cream, and was introduced at Trinity College in 179with the college arms impressed on top of the cream with a branding iron.

Creme Brulee is usually served in individual ramekins.  Discs of caramel may be prepared separately and put on top just before serving, but it is much more exciting to have the caramel formed directly on top of the custard immediately before serving, or at the table where the sugar mix is caramlized with a butane torch.  I associate this method with a lovely dinner Charles and I had while in England, attending a Squadron Reunion, and it brings back such delicious memories.... 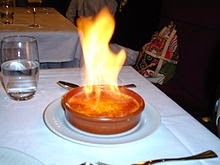 Creme Brulee is available in small ramekins in grocery stores, but somehow it is not the same!

I looked at the heel of my homemade bread this morning, as I cut the last slice for toast, and thought about Bread Pudding, and then wondered if I could turn it into a version of Creme Brulee, - it has the same ingredients.

If you have a yearning for Creme Brulee, here is what you need.

Preheat the oven to 350 degrees, then beat the egg yolks, 4 tbsps of white sugar and the vanilla extract until thick and creamy.

Pour the cream into a saucepan and stir over low heat until it ALMOST comes to a boil.  Remove immediately from the heat and stir the cream into the egg yolk mixture, beating until combined.

Pour the cream mixture into the top pan of a double boiler and stir over simmering water until mixture lightly coats the back of a spoon (about three minutes).

Bake for thirty minutes in the overn - cool to room temperature and then refrigerate for at least an hour.

When you are ready to serve, if you don't have a butane torch handy, combine the remaining 2 tbsps of white sugar with the brown sugar and sift the mixture evenly over the custards.  Place under broiler until sugar melts and carmalizes - watching carefully so as not to burn.

If you do have a Butane Torch, or a Salamander broiler, take it to the table and do your thing!
Extravagantly and with flair.
Very impressive.

For more Bs visit here at ABC Wednesday, with thanks to Roger, Denise and all Busy helpers.
Posted by Hildred at 11:11 AM 18 comments: 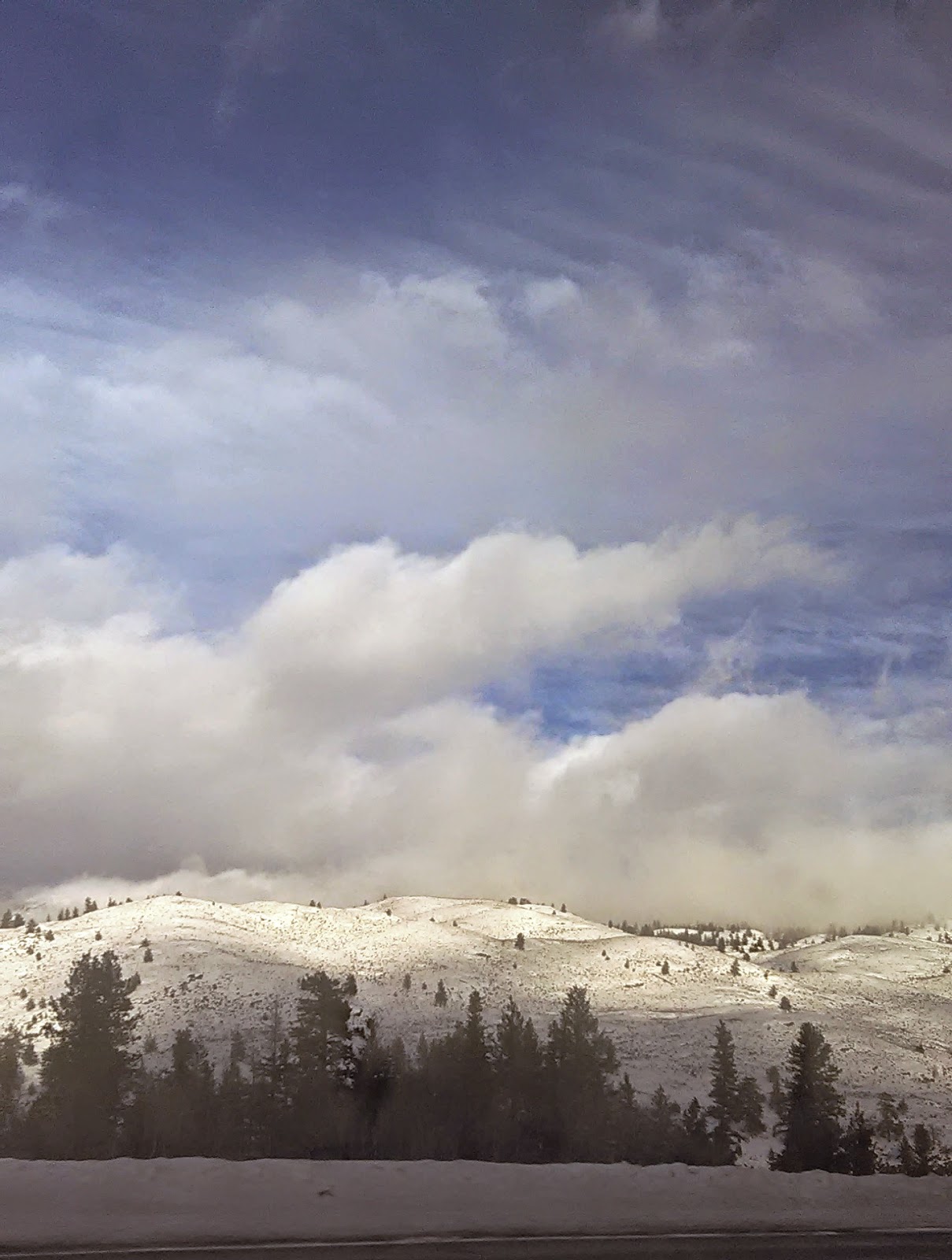 After a quiet week indoors that involved a little weaving, a bit of knitting, some baking and a new book it was lovely to get out two days in a row.

Yesterday the weather was glum and gloomy, but today there was blue sky and sunshine as I went for a drive and a wonderful lunch at the Hooded Merganser with my one good friend from early days who is close by, and her kind and attentive daughter.

We are lucky, both of us, to have daughters and daughters-in-law who are sweet and caring. 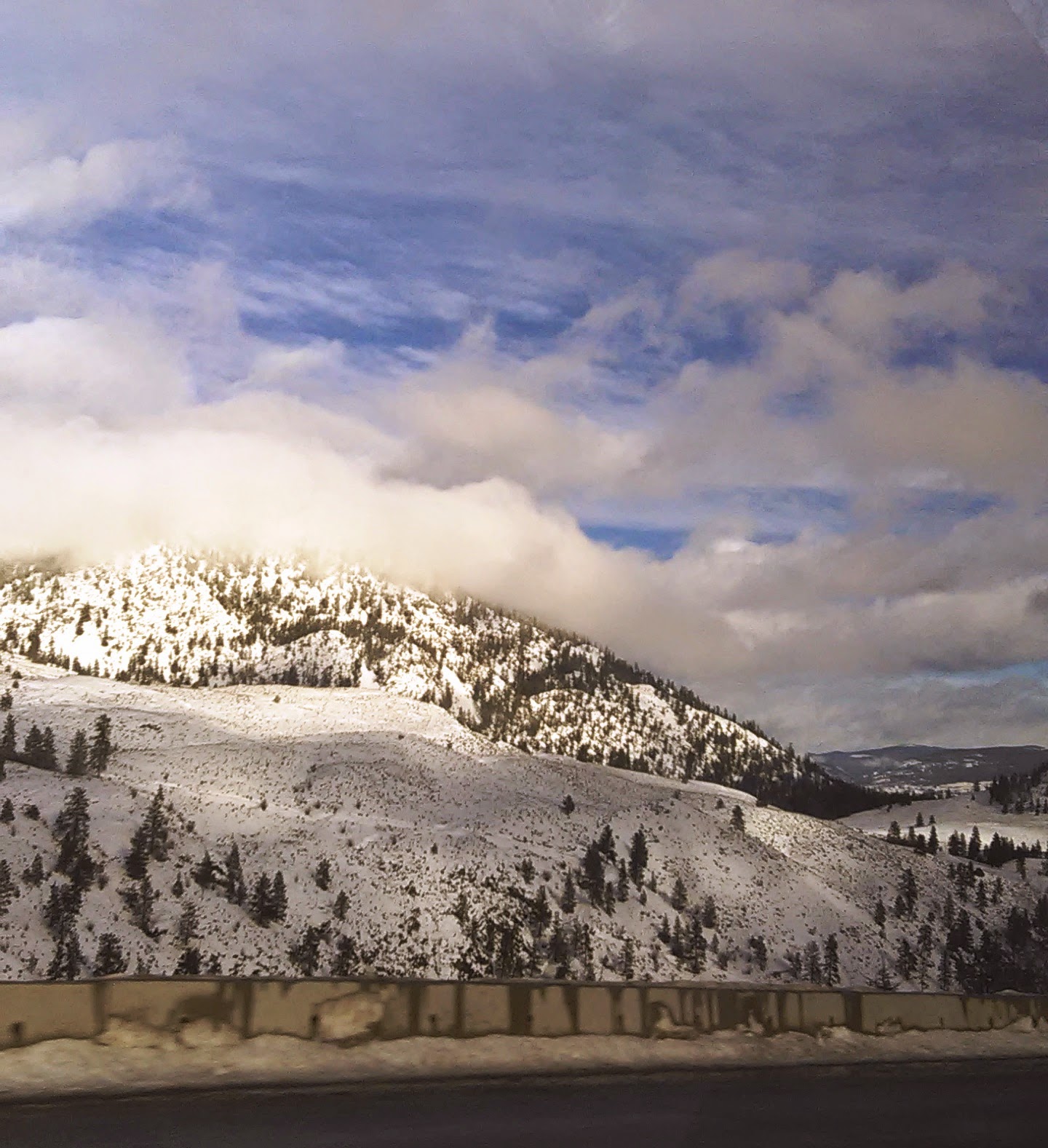 Saturday it was my regularly scheduled monthly day to go to Penticton with my DIL from Summerland.  It mattered not that the clouds encompassed the whole valley, skirting the bottoms of the mountains.

We carried on, - found a new restaurant that serves an exotic collection of Bennys (Eggs Benedict) and lunched with our oldest son.  This was immediately after having coffee and muffins with a granddaughter who lives close, so it was a full-filling morning!

A little shopping  sent me home with a new coffee pot that makes a steaming aromatic brew, pre-programmed the night before,  I can see that it will be inclined to influence the time I rise if I want that first hot cup before I am really wide awake.  Maybe I will pass on the pre-programming and go about morning ablutions while the magic happens......

The weatherman forecast great drifts of snow overnight in the Okanagan
and I feared it would cancel today's outing,
but the snow only fell on the ski hills, which made everyone happy!

As the morning wore on the clouds began to disperse and by late morning,
time of departure, the sun made a rare and welcome appearance.

We had seen great numbers of ice fishermen on Yellow Lake yesterday.
Easy chairs, bonfires and the lake dotted with bright red tents
around many of the fishing holes.  Christmas presents perhaps?

No red tents today, but still lots of enthusiasts out for the day.

Along the Channel Parkway going into Penticton I saw a lovely sign of spring -
the sap rising in a willow tree,
the colour brilliant against the blue sky! 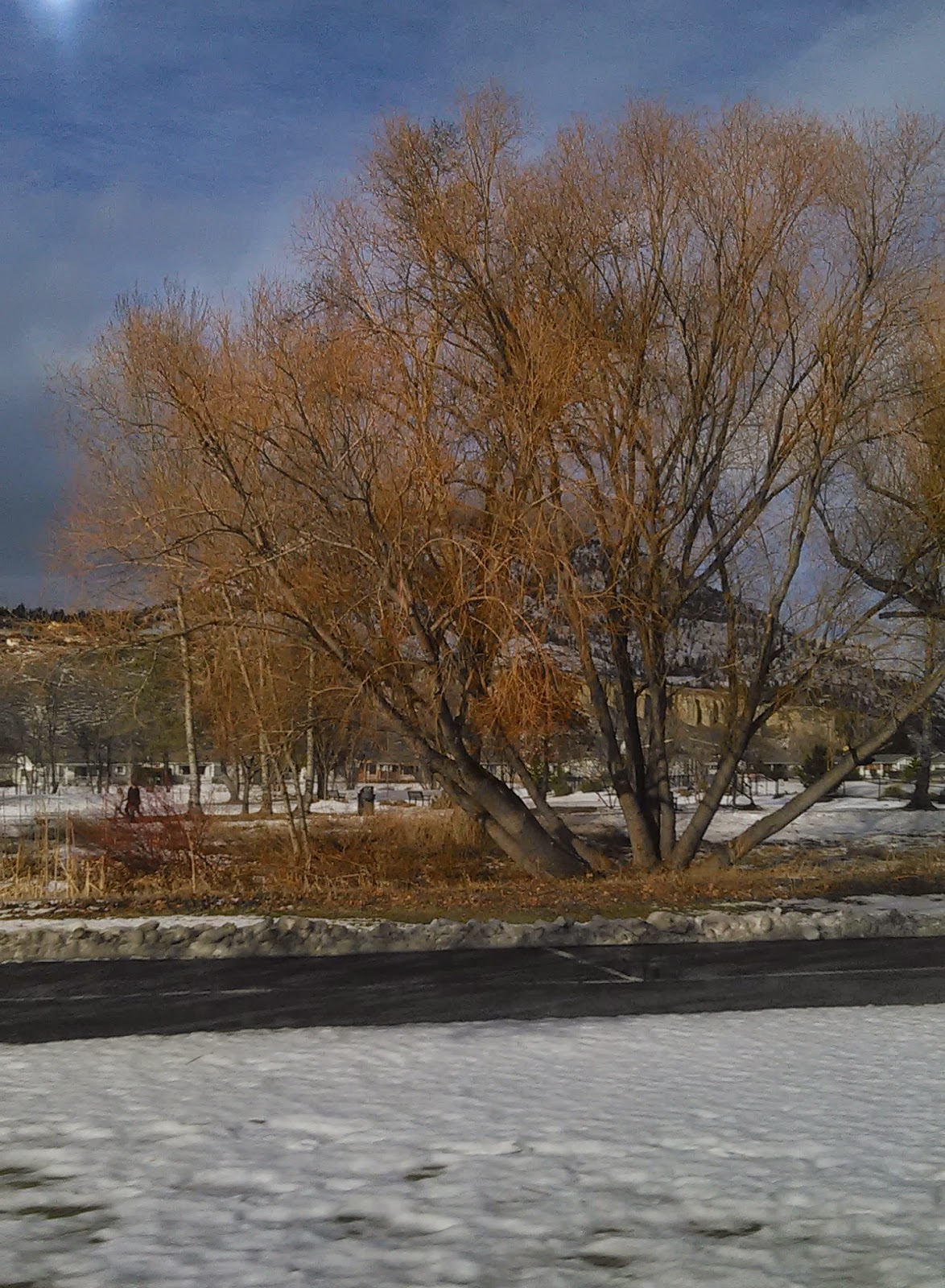 A last delightful outing - a shower for the new great-grandson, who was passed
around the room and slept in everyone's arms, 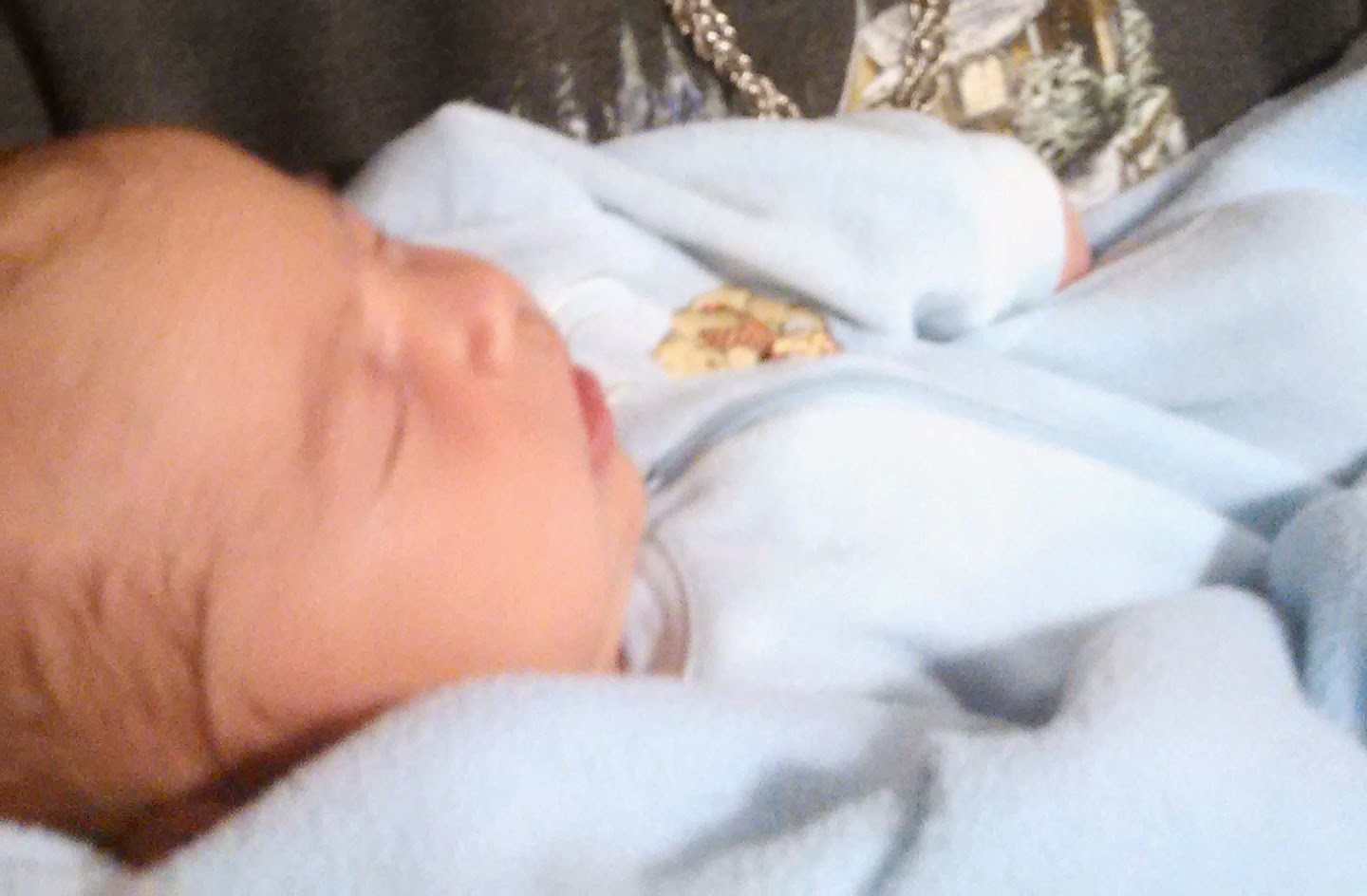 while the next smallest
GGSon entertained all the ladies  with his sweet smile and
adventuresome ways.  A true Finch! 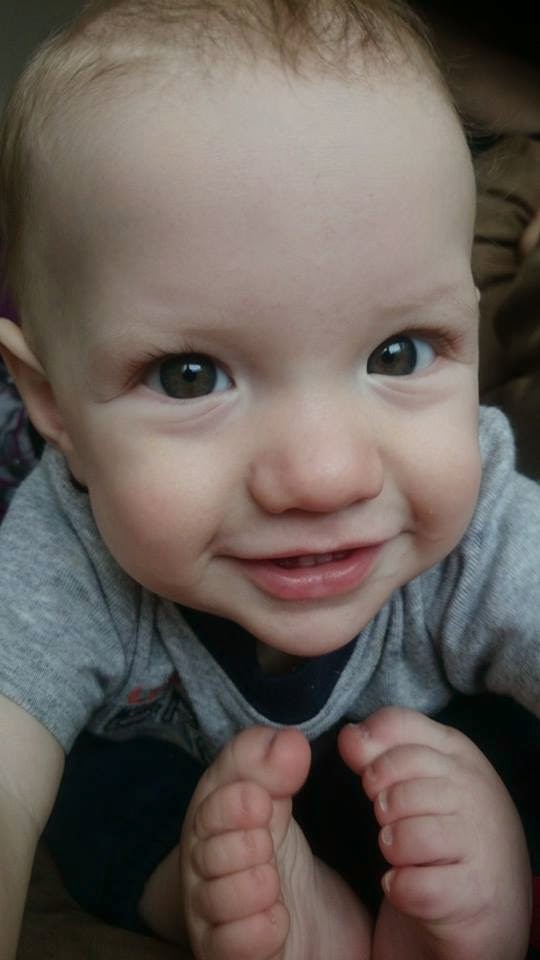