Not for the faint hearted....

Caspar and I are just returning from a little stroll down the lane and as we approach the steps we notice (well, I notice, - Caspar is blind) that there is some rather nefarious activity going on around the rain spout at the bottom of the steps.

I slip Caspar into the house, grab the camera and come back out to watch the action.


Here is the villain, - a big orange spider who I think might be a Kittalog, or some kind of
an Orb spider. 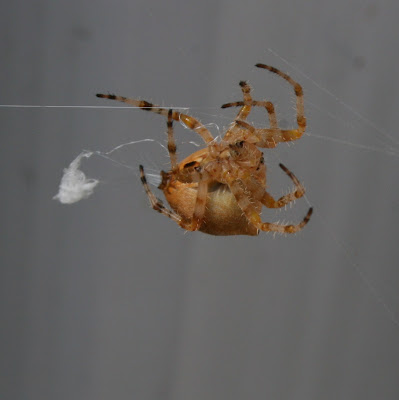 You will note that he is busy at his work, - blowing out silk and  reeling out a line with which he intends to secure his victim.  He has already caught one of the frightened grasshopper's front feet making it difficult for him to do anything except squirm and pull, trying to escape. 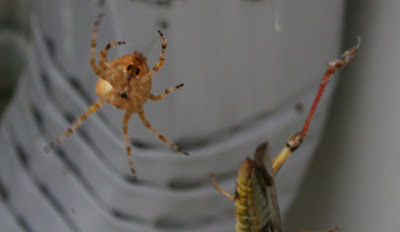 The spider beats his chest a bit and does a kind of war dance that closely resembles a Haka, I think. 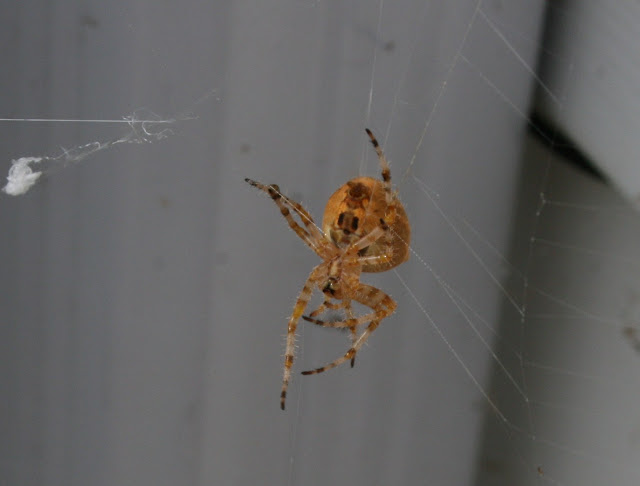 The battles begins in earnest.....terribly one-sided I must admit 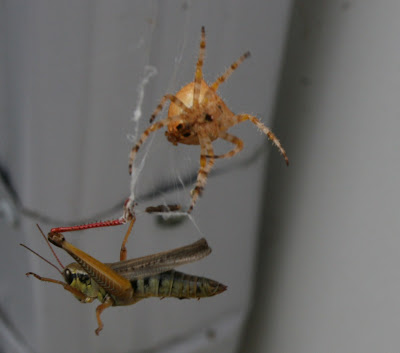 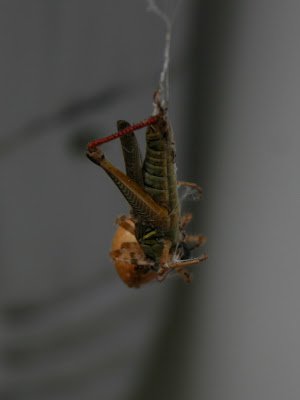 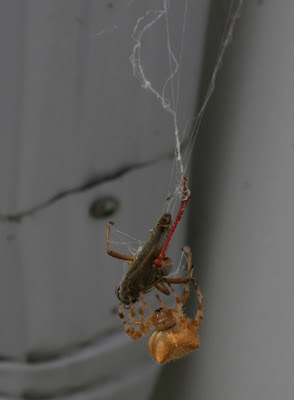 My sympathies are with the poor carefree grasshopper who never in a million minutes while he rubbed his legs together, making merry music, dreamed that such a fate awaited him.  Things have reached a stage where even if I were to deprive the spider of lunch
the grasshopper will not live to sing again. 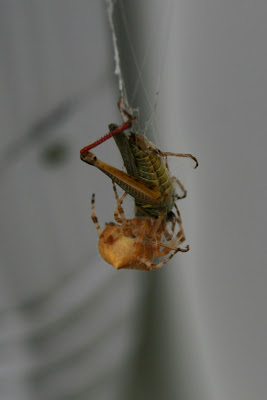 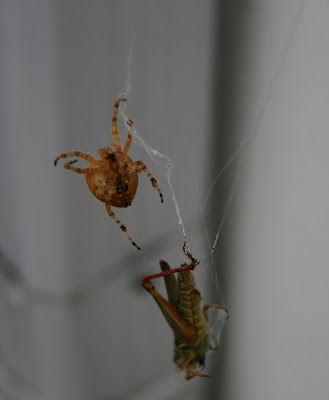 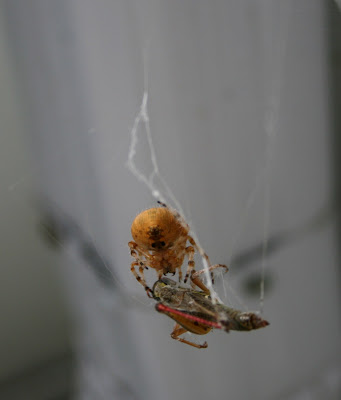 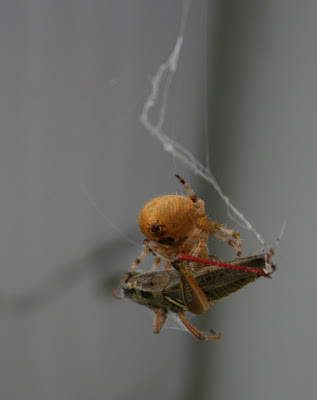 A sad tale, but there, it's only Nature, red in tooth and claw.
Here endeth the biology lesson for the day, with a Requiem for the Grasshopper.
O thou that swing'st upon the waving ear
of some well-filled oaten beard,
Drunk ev'ry night with a delicious tear
Dropped thee from heav'n, where now th' art reared,
The joys of earth and air are thine entire,
That with thy feet and wings dost hop and fly;
And, when the poppy works, thou dost retire
To thy carved acorn-bed to lie.
Up with the day, the sun thou welcom'st then,
Sport'st in the gilt plats of his beams,
And all these merry days mak'st merry men,
Thyself, and melancholy streams.
The Grasshopper - an excerpt
by Richard Lovelace
Posted by Hildred at 9:06 PM 4 comments:

I is for Istanbul 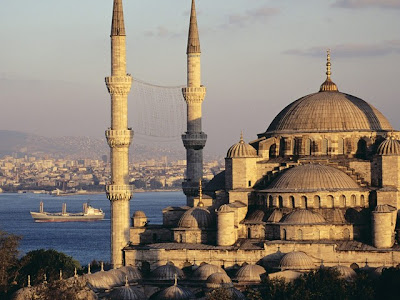 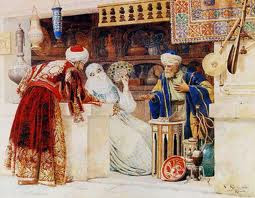 For more interesting I's visit here, at ABC Wednesday with thanks to Mrs. Nesbit and her helpers.
Posted by Hildred at 4:46 PM 21 comments:

Not much to post about tonight, but despite the showery weather and cloudy skies here are some nice pictures of the sky, the garden, the hills...and some gorgeous Nectarines that Sid, our #3 son, brought up the hill for us to enjoy.  We had some at dinner and they were yummy......I am thinking pie! As I pass by them on my way to the kitchen the peachy fragrance is beautiful and mouth watering! 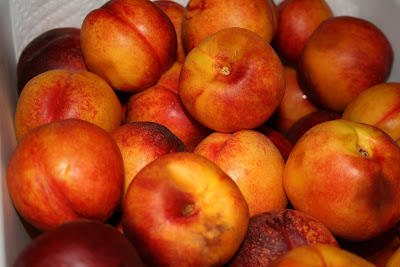 The sky tonight was quite interesting - talking to us about showery weather tomorrow, probably. 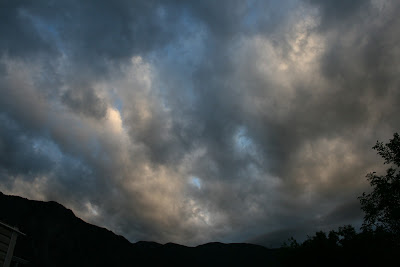 Not nearly as spectacular as the two lovely rainbows that have sprung from dark skies to show us where the pot of gold lies on the Cawston Bench. 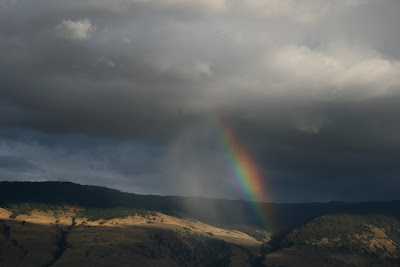 Wednesday evening's rainbow, which I have already posted to my new blog 'Similkameen Skies' (see sidebar) 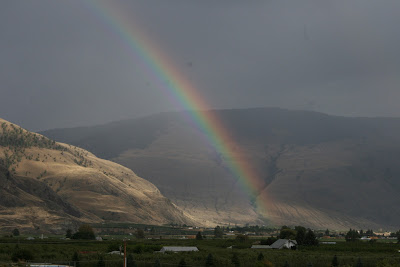 And another vivid shaft on Sunday evening.
Sunday morning at breakfast we spotted what we first thought were mountain goats on the toe of K mountain, but with the spy glass turned out to be three large bouquets of helium balloons tied with scarlet ribbon, escaped from some gay celebration and floating to and fro amongst the rocks and trees and meadow.  Unfortunately I was not successful in getting a clear picture, but here is where they were frolicking.... 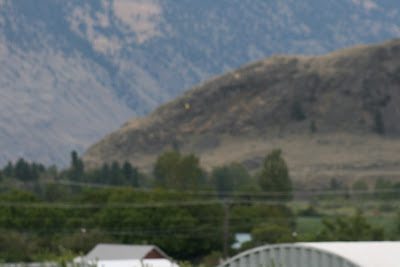 The little white blobs are really the balloons.  We left them partying and went to church.
By the time we got home none of them were as exuberant as they had been,
and they wafted lower and lower, some of them eventually
ending up entwined around the power lines.
I am sure they did have a story to tell. 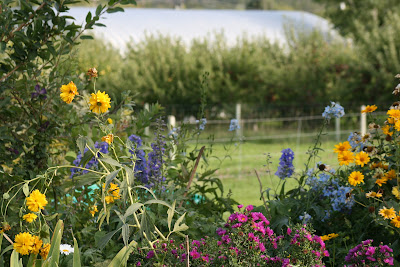 In the garden a few summer flowers mix with the asters and yellow daisies.
but the peony leaves are showing their fall colours along with the scarlet maple. 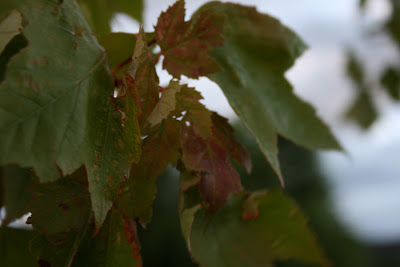 Welcome to Autumn.
Posted by Hildred at 8:19 PM 6 comments: