E is the letter this week

E is for Eeyore, the Endearing, gloomy-doomy friend of Winnie the Pooh.   An old grey donkey with a long detachable tail around which is tied a lovely pink ribbon which he loses quite regularly.  The pink ribbon, I mean.  Owl once found it and used it as a door pull, making Eeyore even sadder than usual. 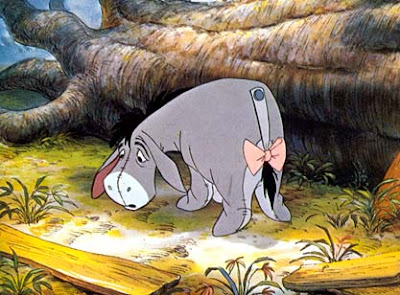 Eeyore lives in the southeast corner of the Hundred Acre Wood where he has a house of sticks which is continually falling down.  This area of the  Hundred Acre Wood is called Eeyore's Gloomy Place: Rather Boggy and Sad.

Of course he has a repertoire of rather despondent quotes arising from his anhedonic outlook on life and his  poor opinion of the other animals in the woods, describing them as having 'no brain at all, some of them' 'only grey fluff that's blown into their heads by mistake'.

At such times he was probably eating thistles, his favourite food.

Christopher Robin and the other animals tried to cheer Eeyore with a Birthday Party.  He was given an empty honey jar from Pooh, a popped green balloon from Piglet, and a note from Owl.  Piglet and Roo seem to be having a merry time while Eeyore looks quizzical and not sure what to think about the Happy Birthday cake.

Be that as it may, Eeyore's birthday party lives on in Austin, Texas on the last Saturday of April each year.

It started in 1963 as a spring party for students of the University of Texas but after a few years it morphed into a full blown Festival, a tradition in Austin's hippie subculture.  The original event featured a trashcan full of lemonade, beer, honey sandwiches, a live flower-draped donkey and a may pole.

When the festival moved to Pease Park in 1974 Austin area non profit Friends of the Forest began arranging for food and drink vendors, public services and scheduling live music and family-oriented games and contests.  Although family oriented in some parts of the Park it is also known for its adult entertainment, - drum circles, scanty costumes, sweet smoke, modern hippies and an annual attendance in the thousands. 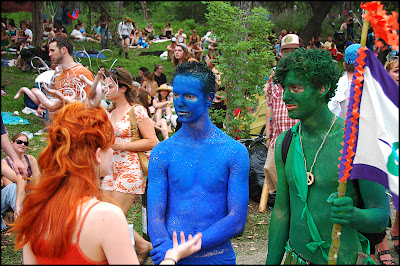 Eeyore would switch his tail slowly and mutter 'I wonder what next!!!!'

For more great E's visit here at ABC Wednesday, with thanks to Mrs. Nesbitt and her wonderful helpers.