Oh how does one pass the winter months when the joys of ice and snow and clear cold air and prairie sunshine and blue skies and the band playing on Wednesday night at the skating rink are all just a fond and faded memory??

Well, one can bake - muffins usually.

Or read - still devouring Ackroyd's London Tome and his history of the River Thames. To embellish these I have The Golden Age of the Thames by Patricia Burstall, an entertaining story of the frivolous life on the Thames above Richmond between 1870 and 1914. It is 'a poignant evocation of a golden age before the carnage of World War 1 made a mockery of its innocence'. And the pictures are delightful. I especially look for references to Teddington, where my grandparents were married and where all their children were born and baptised, including my mother, of course.

They lived on Luther Street, and just around the corner was the Church of St. Peter and St. Paul, - this is the new version. The old church was damaged and demolished in the Second World War. As was their home on Luther Street. 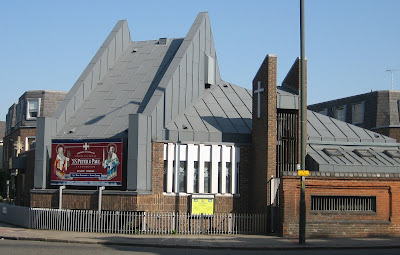 And as a little light dessert after a reading of 'London', I have 'The Four Londons of William Hogarth', - a gossipy little tale of London in the mid 1700's.

I read with interest -

"This corner of London, near to St. Bartholomew's, was where the weavers had settled, as you could tell by the steady clack-clack of heddles, the regular thump-thump of batten on beam. Even had you been deaf as a post you'd have known by the street names, Cloth Fair and Cloth Court, and among these of old taverns and inns, long vanished, such as Rising Sun Court, Barley Mow Passage and Half Moon Court. The houses, wattle and daub, half-timbered as in the days of the Tudors, had escaped the Great Fire of 1666, and leaned their heads across the narrow passages, seeming to gossip of time long gone when London Town had liv ed almost entirely within its protecting walls. Now it was spreading outward, a rising tide, north and west, embracing moor and marsh and farmland as the lusty thriving population expanded year by year and the beginning of the Inclosure Acts deprived the country folk of wood and grazing ground, bringing them hopefully to London to seek new livelihoods.

But the weavers had been here for a hundred years and more; they were cockney born, though many still spoke their native tongue and the powerful Cloth Guild held a mort of Flemish members. There was a song they sang sometimes; they were singing it now, to the thump of the treadles.

Having both a shepherd in the family and a weaver I have an empathy for those East Londoners who worked so hard at their trades, whilst to me weaving has been a wonderfully fulfilling hobby.

My grandfather was a Milk Boy in Hammersmith in the latter part of the 19th century. I am fascinated to read of the villages, the streams and the country-side that gradually disappeared as London stretched and grew.

These are both mighty weighty books, and in between I knit (socks) and lose myself in technology that enables us to transfer taped interviews with pioneers to more permanent and secure CD's. I am blown away by the advance from the ham radio my father had in our basement to the fabulous cell phones my grandchildren sport, - and which I also covet!!

I also dream about gardens, tend the recalcitrant amarylis and Christmas cactus, wash a little woodwork now and then. I play a bit of Scott Joplin and skim over the hymns for Sunday organ playing. We watch the birds, and feed them copiously, and somehow the winter passes. As the days grow longer our spirits rise, and the lengthening light strengthens the sinews of the soul....

Well, it is time to go and play cards and feed the little dog his biccies before we go out for a small walk...and so to bed...
Posted by Hildred at 8:51 PM 1 comment: 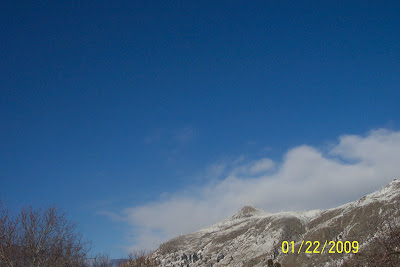 Blue skies.
Smiling at me....
Nothing but blue skies
Do I see.

Happy faces hereabouts, - even the dust is lying around smirking in the sunshine....
Posted by Hildred at 1:49 PM 1 comment:

Labels: a sunny day, blue skies, is that dust, wow

My days seem fractured, - a week of damp, gloomy, shrouded weather have left me feeling sapped of energy and enthusiasm. Not despondent, not despairing and not dejected - just entertaining a little melancholy.....

I play a little music and read a bit (The Last Lecture and Peter Ackroyd's 'Sacred River).

Thoughts of warping the loom pass through my mind, but before I can do the math they dissipate amongst the clouds.

I contemplate the state of the kitchen cupboards and my bureau drawers, and if I tackle one I am momentarily exhilarated, but alas, not enough to engender a full blown clean out.

Husband is attempting a DIY method of transferring some precious pioneer tape interviews to CD, the better to preserve them. I call upon all sources of grace to preserve my patience and contain my frustration. I have so little knowledge to help him, but search the net for answers, - suspecting all the while that the only sane answer is to go to an electronic shop and buy a dratted machine that does the job in the wink of an eye, and with as little effort.

This project takes up many a morning hour, and I suppose at one and the same time it is a bane and a blessing to have this 'togetherness'......if you know what I mean!

I made a couple of apple pies the other day, and that lifts the spirits. So does the eating of them, but alas, they are all gone now.

I have a little bowl of creamy hyacinths just coming into bloom, and the late potted amaryllis are starting to thrust the beginnings of sturdy green stems through the round, rough bulbs.

The Christmas cactus, which refused to acknowledge the season, has lovely quarter inch buds on it...and the quail come twice a day to feed...

All is not lost, - the sun will return, or we will go to Penticton and search it out where it shines on the high passes. And Groundhog Day is only a couple of weeks away. I will be very cross if we have endured all these dark, glum, shadowless days only to have it bright and sunny on the 2nd of February.

I yearn for spring and early mornings in the garden....
Posted by Hildred at 9:22 PM No comments: