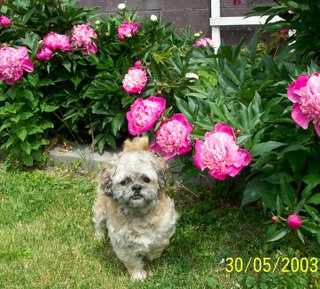 For many years my husband and I depended on rising early and having breakfast together before the children swamped us. After we found ourselves with an empty nest we still had busy days and it was the one time we could be alone together to talk about the important things, and the not so important things, trade news, ask advice, receive advice (you would understand this aspect of our conversation if you were familiar with my husband) gossip a little, and forge the bonds that have kept us together for 61 years.

Now we are not so busy, and the retirement years are upon us, breakfast conversations are still an important part of our day, but they have changed somewhat in content. They involve a recital of the hours we spent in bed.

Sleeping well - not so well.

Mind refused to shut down - didn't sleep all night, just hovered on the edge.

Did you hear the dog woof - did you catch the faint odour of skunk passing through?

Couldn't breath properly, - could it be dust mites?

But after good nights a contented relating of unbroken slumber, and a sigh of relief.

The topic turns to items in the paper which is now spread out before husband. Main priority goes to political topics, and these can engender a fairly passionate conversation, but luckily we are of the same persuation, and the heat is equal on both sides of the table. Eventually the newspaper loses its hold - I go to make breakfast and listen to the occasional comment floating out into the kitchen.

When breakfast is done, and we linger over coffee, then we can look forward to the day.

I have neglected to mention the part the little dog, Caspar, plays in this breakfast ritual.

There is the traditional throw and fetch game of ball and the feeding of bits of toast, but he doesn't come in to his own until our daughter arrives for coffee and a visit after her morning job.

She and Caspar have a routine. He sits on his little hind end, waves his front paws in unison, and talks for treats. He used to sing for treats, but Caspar is like the rest of the family, - growing old and losing some of our most endearing charms. He also has a nasty little habit of nipping at toes if they come too close to his sleeping bod and startle him. He is variously loved, liked, accepted or frowned upon, depending on who in the family is expressing an opinion about him.

Well, it is time to do the night-time ritual and go to bed.

Main purpose - to garner breakfast-time topics for tomorrow's conversation!
Posted by Hildred at 8:53 PM No comments:

When we begin to feel dismay at the slowness with which we work, and we bemoan the aches and pains that accompany tasks that were once accomplished with ease and pleasure, - and when we start to feel weary and irritated and the joy of each day doesn't buoy us up, - that's the time to stop practising hymns for the organ and start to play Scott Joplin!!!!

I know that the Elite Syncopations or the Pineapple Rag will elicit a positive response from my husband, no matter what he is doing.

Music is such a wonderful "pick-me-up" - or "calm-me-down" - whichever is required. Our emotions are attuned to the lilt and the rhythm, and the memories evoked by favourite tunes seem guaranteed to lift the spirits.

We don't dance around the kitchen much anymore, but the dance tunes of the era we grew up in, and the songs of wartime and the years immediately after, can make us feel young again and full of spunk.

And so I play Scott Joplin for our enjoyment, - with fingers that have stiffened somewhat and don't play with the same sureness they once did. But the magic is still there, and half an hour of Rags can put a little spring in the step and a little hope in the heart.

And for melancholy times there is always Joplin's beautiful and haunting Solace.
Posted by Hildred at 8:26 PM No comments: 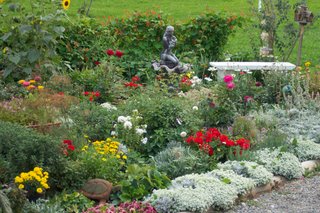 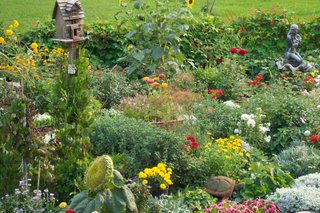 The new garden in August, - joyous and fulfilling all hopes.

The hands still find comfort in the soil,
and the heart in the promise of another year.
Posted by Hildred at 5:21 PM No comments:


Traditionally the last two weeks in August are a tenuous time to plan holidays in the Okanagan/Similkameen, but instead of the rain that often comes at this time of year the sky is heavy with smoke from the Tripod fire in Washington, seeping across the border and up the lower Similkameen, through Cawston and into the main valley. On a positive note the smoky skies are rendering the sun's rays less powerful and keeping the ripening apples from scalding.

We have been haunting the fruit stands, looking for over-ripe peaches to bring home, slice up and enjoy at each and every meal. Not the same as sending a child out to pick a pailful off a heavily laden peach tree, but age must make it's concessions and we are thankful to live where fresh fruit is handy.

I had a lesson in humility yesterday as I tried to download a program under a grandson's patient supervision, and via Windows Messenger. Sometimes the selenoids fail, and the networks just don't connect up, but we were successful in the end, and that was a fine compensation for a frustrating struggle. Probably what I appreciate most about the whole endeavor was my grandson's sweet patience, and that he resisted taking over my computer to do it for me. Hands on is a great way of teaching, and one that stays with you if you are smart enough to take notes. And then not forget where you put the notes!!!

We have been in this new house almost a year now. In the rush of moving boxes get put up on shelves and things get tucked away in unfamiliar places. With our daughter's help I have been able to investigate the contents and delighted in finding yarn I had forgotten about, pictures I had thought lost, and even last summer's shoes that got packed into a box and shoved under the house!

This morning I heard my husband exclaim, (as he went through an airforce file) "here is a letter with all the names and addresses of the members of 170 Squadron"! Sadly out of date, alas, - the date on the letter was August 8th, 1945.

One of the compensations of growing old, - having the time for memories, even if the short term ones aren't as sharp as the childhood remembrances.

Take the goods the gods provide, and don't stand and sulk
when they are snatched away.
- Mary McMullen
Posted by Hildred at 3:18 PM No comments: