A Good Friday drive
to see the Greening of the World

This spring as it comes bursts up in bonfires green,
Wild puffing of emerald trees, and flame-filled bushes,
Thorn-blossom lifting in wreaths of smoke between
Where the wood fumes up and the watery, flickering rushes.

I am amazed at this spring, this conflagration
Of green fires lit on the soil of the earth, this blaze
Of growing, and sparks that puff in wild gyration,
Faces of people streaming across my gaze.
- D. H. Lawrence, The Enkindled Spring

After tea this afternoon Caspar, Husband and I went for a drive (while the Cat stayed home and oversaw the recording of a T.V. program.)

What a delight to be overwhelmed with the tender greens of spring. 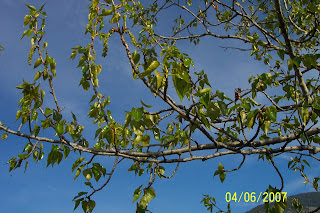 The verdant spring green of the meadows, where the cows and their calves are living in luxury. In the far distance the back side of Apex, reminding us of the great quantity of snow still to melt in the mountains. The fairy tale green of the poplars along the river, contrasting with the greys and ruby reds of the bushes that still retain their pre-spring colours. 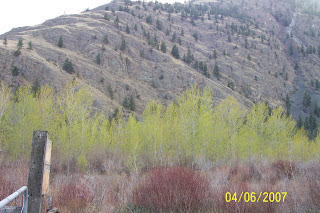 Amidst all the fiery greens are the serene and subtle shades of the birches - a dreamlike spot to relax in. 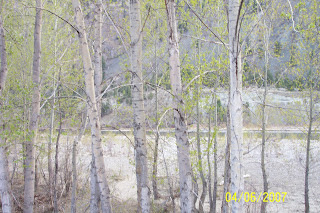 Friendly white wisps of clouds, - a bright blue sky and two trees reaching towards the heavens, newly arrayed in emerald shades (what else!) 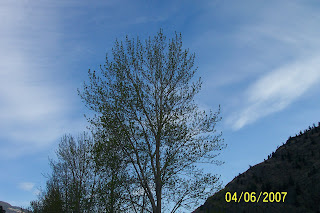 At the bend of the river the sun reflected off the water, rushing and tumbling on its way downstream. 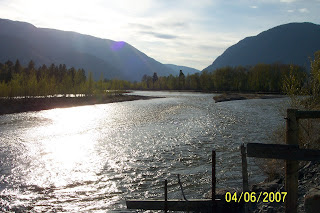 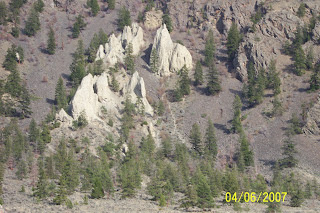 and the sun shining on Daly Bluffs accentuated the shadows of the crevices and crags, and the warm rosy shade of the talus slide..... 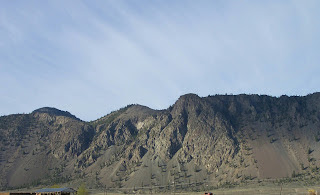 A newly leafed out wild rose bush still bearing the scarlet hips of the fall. 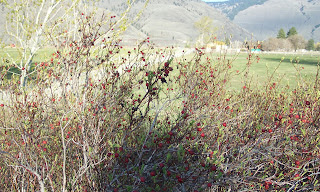 And throughout the orchards lines of chorus girls in tutus - the apricots in their frothy bloom. 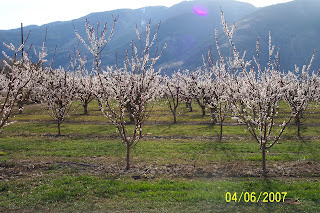 In the driveway at home we found the cows feeding beneath a panoply of white - beautiful old fashioned full size apricot trees, laden with blossom. 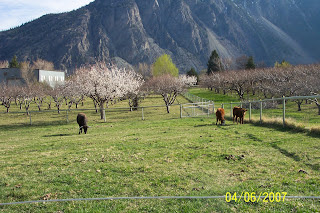 The absolute jewel in this lovely chain of images was our sighting of a cock pheasant, which brought back memories of our first years in this valley, when they were so plentiful along the creek and in the brush. 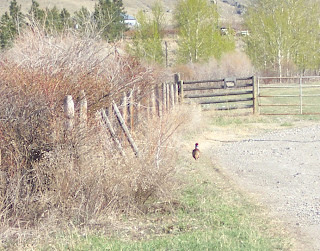 We arrived home to find Miss Callie waiting anxiously to tell us that the DVD had recorded successfully. A real plus... I believe that was what all her eager greeting was about?
Posted by Hildred at 8:12 PM No comments:

While Husband was rooting around in the fridge for his nightly bowl of grapes which sweetens up the late evening card game he came upon one of my Symbols of Lost Intentions - the rib bone from last week's rib roast of beef, (which I had intended to simmer up into a pot of soup - truly, I had the best of Intentions) 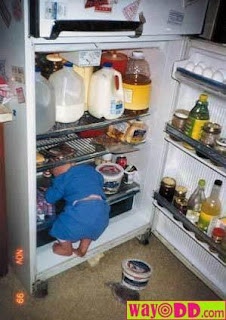 These Symbols of Lost Intentions are kept in the fridge in the same way one keeps their valuable jewelry in the safe behind the picture in the library. If one had any valuable jewelry, - and if one had a safe or a library. These Symbols can lie there for weeks without being disturbed, in total security. The green mold that gathers around them may not improve their attractiveness, - or for that matter, their usefulness. But it is a good indication that it is time to move the Symbols of Lost Intentions from the fridge to the little red garbage can under the sink.

A catalogue of the Symbols that Husband did not come upon would reveal a small plastic bowl of baby carrots which I had Intended to add to the soup made with the bone from last week's rib roast; a small portion of orange and vanilla yogurt left in the old container when I opened a new and much more appealing one; a smidgin of pork and beans, destined for a side dish when supper was sparse; a half a dish of macaroni and cheese, kept for the same reason; some home made vegetable soup that we tired of before it was all gone and a little heel of cheese - gone mouldy.

All left-overs that had morphed into Symbols of Lost Intentions as they lay safely in the darkened fridge (I am of the enlightened clan who believes that the light goes off when the fridge door closes.)

While I was still buying Expensive Dog Food for Caspar, before the present pet food crisis, I had accumulated 933 little plastic bowls, - perfect for storing Symbols of Good Intentions. Now I am filling these little plastic bowls with home made pet food, and sometimes the Symbols of Good Intentions find their way into this pet food, - that is before they have matured (I like that word) into Symbols of Lost Intentions, and while they are still wholesome and useable.

Check out your fridge, - how many Symbols of Lost Intentions have you got hovering at the back - or even in the useable front four inches!!!!

Weather Report, amongst other things

As I drove home from handbell practice last night Venus was bright in the western sky, skimming the tops of the mountains, while behind me a full moon was rising over the Cawston hills, flooding the valley with a silvery light.

A beautiful evening, but not for orchardists who are trying to protect their apricot blossoms from freezing. With the stars, the gorgeous moon and the clear skies comes the very real threat of frost.

The trees are greening, with their leaves at half mast, and the blossoms on the apricot trees are showing colour as they prepare to dress the branches in frothy white. April has the farmer living on the edge, and perhaps thinking what T.S. Eliot expressed so well, - "April is the cruelest month." 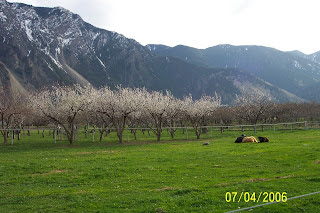 When I wandered the house during the night moonlight was still lighting the big bathroom through the skylight, but by morning the clouds had gathered, the temperature was just barely grazing zero and a chilly wind was keeping the air moving. Hopefully all was well, at least at this elevation.

Today was chilly, but pleasant. Tonight still threatens frost in the still, lower reaches of the
valley. 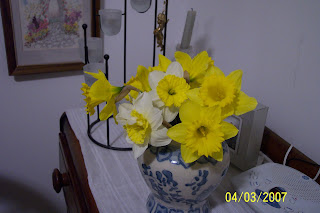 I brought the first daffodils into the house this afternoon, along with the prunings from the red maples, which were freshly pruned this morning.

I ran into the house to get the camera, hoping to snap a picture of Husband, five steps up on a 12 foot ladder, pruning shears in hand and a guilty smirk on his face. Have you ever noticed what men will do when your back is turned!!!!

Before I could return with the camera Number Four son had come upon Husband, and he was back down on the ground. I couldn't very well ask him to climb the ladder again in order to take a picture, so it will have to be a mind memory, not a photo shot. The Red Maples were 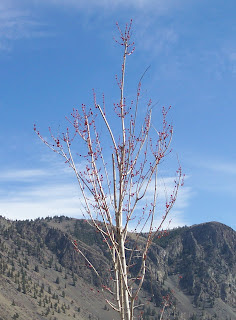 pruned, but Husband had to be content with directing the operation.

Which, of course, we all know he does very well!!!

I am happy to report that the Cutch Battle is being successfully waged, and mop up operations should be all that remain to do in a couple of days. Unfortunately another plant has fallen victim to the ubiquitous grass, but this one was the Common Yarrow, and almost as invasive as the Cutch grass, so it was a case of killing two birds with one stone.

Speaking of birds, and in a more pleasant way, - late in the afternoon I put a small sprinkler on the garden and soon there were a dozen or so eager robins, sparrows, finches and one nuthatch gathered around the water.

Robert Frost cautions about becoming too complacent about April weather, but for now I think we can relax and enjoy the next few days of sunshine and fresh breezes, and hope that the nights will be kind.

The sun was warm but the wind was chill.
You know how it is with an April day.
When the sun is out and the wind is still,
You're one month on in the middle of May.
But if you so much as dare to speak,
a cloud come over the sunlit arch,
And wind comes off a frozen peak,
And you're two months back in the middle of March.
- Robert Frost

Oh, give us pleasure in the flowers to-day;
And give us not to think so far away
As the uncertain harvest; keep us here
All simply in the springing of the year.

Oh, give us pleasure in the orchard white,
Like nothing else by day, like ghosts by night;
And make us happy in the happy bees,
The swarm dilating round the perfect trees.
- Robert Frost, A Prayer in Spring

Posted by Hildred at 9:32 PM No comments:

Labels: April weather
Newer Posts Older Posts Home
Subscribe to: Posts (Atom)
"Thou knowest not what a day may bring forth." —Proverbs