The letter of note this week is F


F is for  Anne Kingsmill Finch, Countess of  Winchilsea

the portrait is by Peter Cross c.1690
at present in the National Portrait Gallery, London

Anne Kingsmill was born in April, 1661, the third child of Sir William Kingsmill and Anne Haslewood.

At the age of 23 she went to the court of Charles II as a maid of honour to the Duchess of York.

She married Heneage Finch, a courtier and soldier appointed Groom of the Bedchamber to
James, Duke of York,   It was a rewarding marriage for both of them.  Thirty-nine years later Heneage still noted the anniversary of their wedding in his private journal as "Most blessed day."

Because of their strong loyalty to the Stuarts both she and her husband were
forcibly retired when James II was deposed, and in April 1690, Heneage was arrested on charges of Jacobitism for attempting to join James II in France.  Until November, when the charge was finally discharged, Anne and Heneage were separated and it was a time of great anxiety for them.

The Finches were invited to live at Eastwell, the home of Charles Finch, Earl of Winchilsea (Heneages' eldest brother's son.  There Anne continued to write and received great support from her husband.

In the Kentish countryside and from the safety of a private country house
Finch bravely published a volume of her poetry, despite the mockery
she received as an aristocratic woman writer.

Heneage transcribed an eloquent obituary to her which read, in part,

"To draw her Ladyship's just Character requires a masterly Pen like her own (She being a fine Writer, and an excellent Poet);  we shall only presume to say, she was the most faithful Servant to her Royal Mistress, the best Wife to her Noble Lord, and in every other Relation, publick and private, so illustrious an Example of such extraordinary Endowments, both of Body and Mind, that the Court of England never bred a more accomplished Lady, nor the Church of England a better Christian."

Her poetry 'sparkles with witty commentary and playful humour'.
It is said she wrote with clear conviction of what she saw and experienced
and with a direct and personal voice.

It has also been suggested that she may be the best woman poet in England prior
to the nineteenth century.

See, Phoebus breaking from the willing skies,
See, how the soaring Lark, does with him rise,
And through the air, is such a journy borne
As if she never thought of a return.
Now to his noon, behold him proudly goe,
And look with scorn on all that's great below.
A Monark he, and ruler of the day,
A fav'rite She, that in his beams does play.
Glorious and high, but shall they ever bee,
Glorious, and high, and fixt where now we see?
No, both must fall, nor can their stations keep,
She to the Earth, and he below the Deep.
At night both fall, but the swift hand of time
Renews the morning and again they climb,
Then lett no cloudy change, create my sorrow,
I'll think 'tis night, and I may rise to-morrow.

For more interesting Fs visit here, at ABC Wednesday, and enjoy the efforts of all who take part in this great meme, sponsored by Mrs. Nesbitt and her fabulous helpers.

A morning of intermittent sunshine, blue sky and pussy willows..... 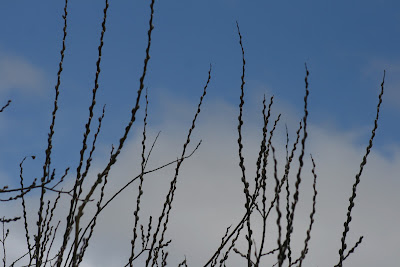 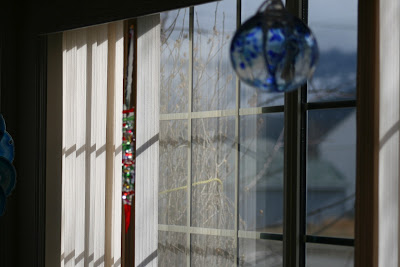 Yesterday was a grey day, but nonetheless we had such a lovely, satisfying afternoon.

Took the camera and found colour in the early spring sap
rising in the willows. 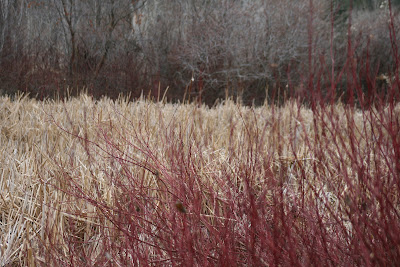 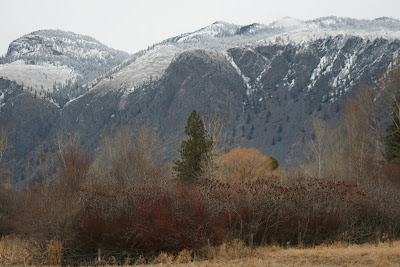 in the bare-boned whiteness of an old barkless stump, home to some of the
wild creatures that live in Ginty's Pond
and vicinity 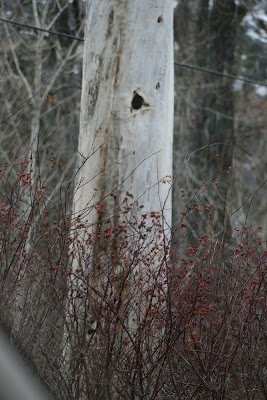 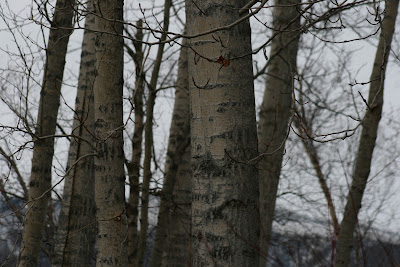 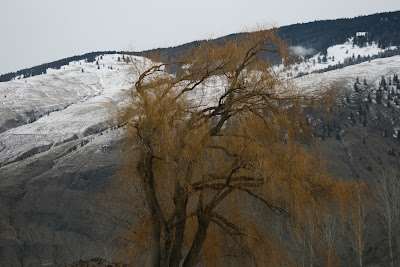 the willows and the birch trees anticipate spring, and send sustenance up into their branches 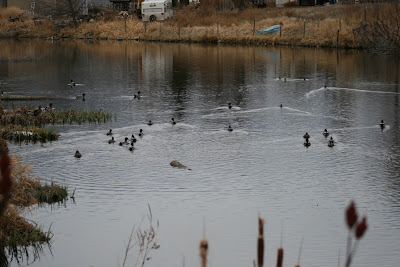 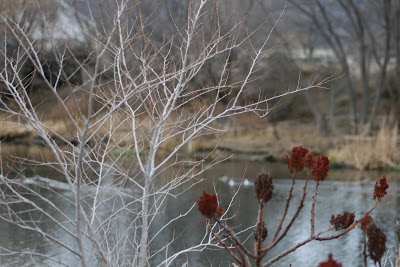 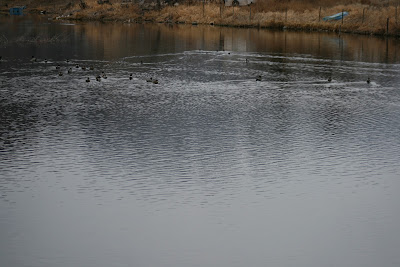 the dried grasses will be glowing today in the sunlight, but
yesterday they were beautiful subtle shades of cream and sand
and naples yellow. 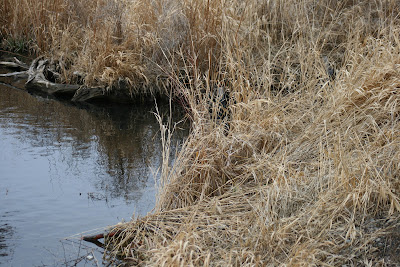 the grass on a newly burned slope  is thick and rich until it reaches
the fading remnants of the fire retardant that extinquished the blaze before it consumed
the whole mountain side. 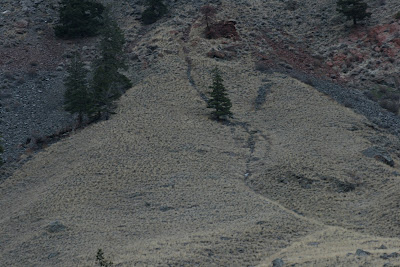 Charles takes a beautiful wintry picture of Keremeos Creek, and is that a
flotilla of ducks just at the bend, in the distance? 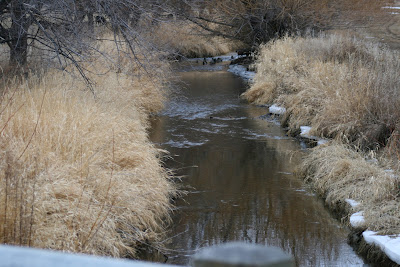 The Similkameen Valley is also known as Eagles' Valley, not only by the First Nations people
but also by those of us who have lived here long enough to appreciate
that this is a habitant of these beautiful birds.

I have written here before, I believe, of how I saw three great eagles circling
the funeral cortage of one of the elder natives (who was our neighbour) as it wound up the valley,
in the early years
when we first came here to farm with other Veterans of WW 2

We stopped to take a picture of the story of Eagle Valley that is located in a little turn out
on Highway 3, that runs through the Lower Similkameen Indian Reserve 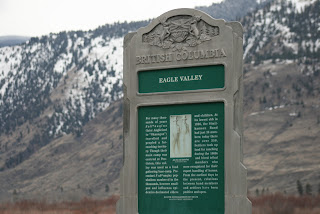 and an enlargement of the two members of the Band who are pictured here. 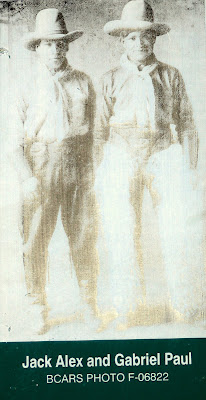 We also photographed some of the older houses in Cawston and in the Lower Similkameen,
and we reminisced about one, in particular, which is now in a sad state of disrepair and
has been empty for decades, but once housed people that we knew, and who were friends. 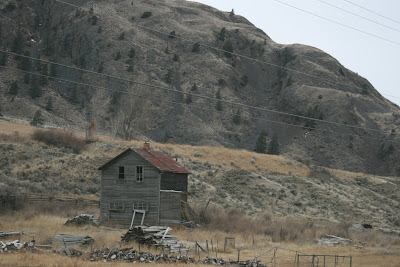 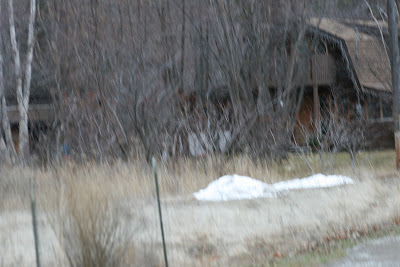 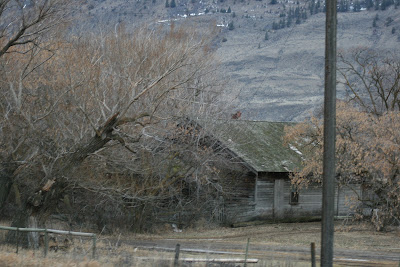 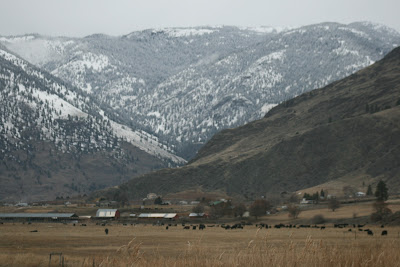 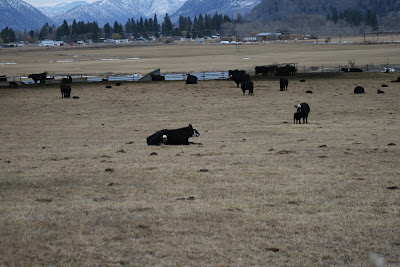 Finally we passed by a sign which expresses the feelings of those who live in this valley
about a proposed National Park, which is highly favoured by environmentalists in
California and people in Timbuctoo and Europe and other far-flung spots, but threatens the peace
and livelihood of those who farm, and live here. 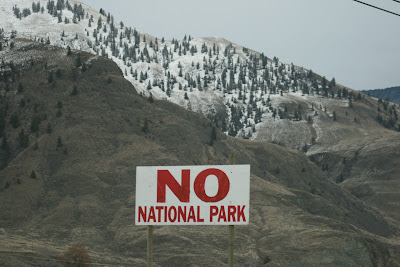 The very few who are in favour of this National Park put their signs high  on
telephone poles to keep them comparatively safe from the locals......