The letter is F for FATA MORGANA 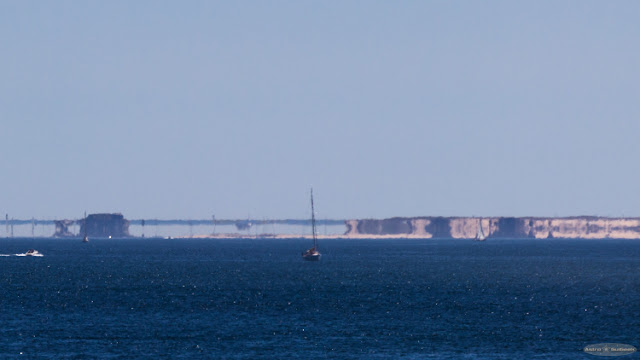 A Fata Morgana is a complex form of
superior mirage that is seen in a narrow band right
above the horizon.

This particular Fata Morgana is a mirage observed
from Brittany, France, and it is affecting the rather featureless
Island of  Ile d'Houat, located about eleven miles from
the shoreline.

This photo was taken by Guillaume Doyen who says
"notice that parts of the island seem to be floating or looming.
Mirages such as this occur when there's a steep temperature
gradient.:  when a layer of colder air (immediately above the seawater)
is trapped below a layer of warmer air - a temperature inversion. the temperature at the time the picture was snapped was 98F"

Guilllaume Doyen goes on to say
"under these conditions light rays from a distant object
(the island) are curved toward the eye by layers of air
having different densities, caused by the abrupt temperature gradient.
So it seems that the island is more or less smeared upwards into a cliff."

This Fata Morgana mirage lasted for a little more than an hour.

Before science began to look into mirages, and their cause,
mirages were firmly in the realm of mysticism, and the fata morgana
takes its name from Morgan le Fay, that wicked half sister of King Arthur,
enchantress and treacherous fairy. 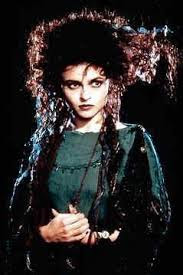 You may well ask how bending light creates a mirage,
and here is where your brain enters the picture.

I learned this online, and I quote verbatim....

"When light hits your eyes, your brain assumes it arrived there in a straight path between you and the object reflecting the light.  So if light is bent on its way toward you your brain will think the object is where it would be if the light's path was straight.  This is why when you are looking down on a surface of water, objects under the surface will appear to be in a different spot than they actually are.....the human brain doesn't automatically account for refraction"

The writer of this article goes on to say
"the brains of some birds like ospreys do correct for the effect
so that when they dive headlong into the water after a fish,
they are right on target"

Christina Rossetti wrote a poem entitled FATA MORGANA
and it goes like this....

A blue-eyed phantom far before
is laughing, leaping toward the sun:
Like lead I chase it evermore,
I pant and run.

It breaks the sunlight bound on bound:
Goes singing as it leaps along
To sheep-bells with a dreamy sound
A dreamy song.

I laugh, it is so brisk and gay;
It is so far before, I weep:
I hope I shall lie down some day,
Lie down and sleep.

Perhaps she was referring to the constantly changing conditions
of the atmosphere which causes the Fata Morgana
to change within just a few seconds of time,
alternating between stretched and compressed zones,
either erect or upside down.

If you are interested in reading more of the history of the Fata Morgana
I would suggest you Google
"Fantastically wrong: the bizarre mirages that once
scared the bejesus out of sailors"

For more interesting Fs visit here
at ABC Wednesday
with thanks to all who maintain and visit....

No rain, but a lovely smokeless day!  The first in two weeks when we have not been besieged by great drifts of smoke from the wildfires in the interior of B.C., - the central portion where a few of my dear children are waiting, ready and prepared in case they not only have smokey days but also flames coming along to their fifty acres of meadow on the mountaintop.

Whenever I have been inclined to complain about smoke, or when I hear someone else complaining, I always say "but no flames!!"

Rain would be nice...the garden looks perky in the morning, but by this time of night the pots are crying for their evening watering.

Last night after my evening stroll with Bruce I gathered up all the outdoor pillows and tucked them into the sun porch, in preparation for the rain the weatherman promised.  It DID rain, in Penticton, in Kelowna, and up the valley, but here in the semi-desert Similkameen, not a drop!

It rained in the Chilcotin, where the fires are prevalent, but it rained mud and ash, all over the windows, said he who had to wash them....

Well, anyway, the garden is golden in these hot, dry August days. 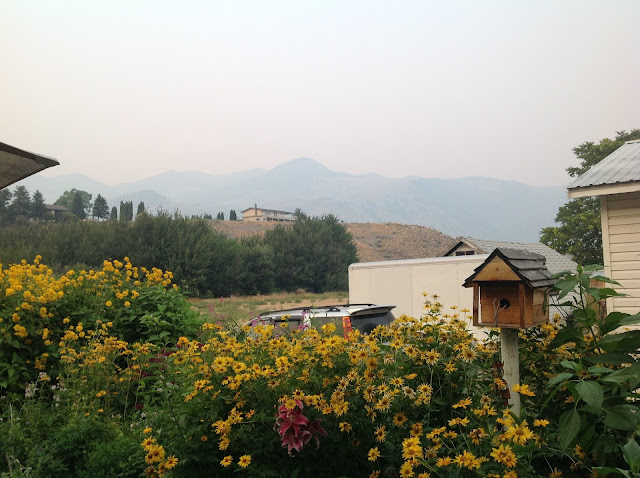 and in the evening I luxuriate beside the Nicotiana that grows in a pot next to the swinging garden couch, enveloped in its beautiful scent. 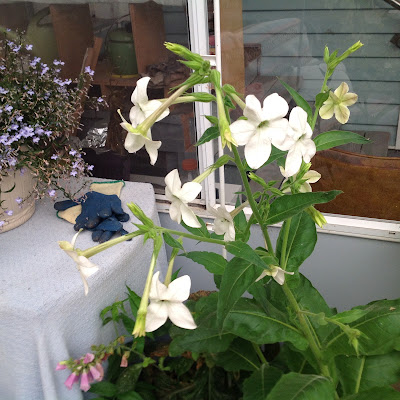 The evening are shortening, and it is time for Bruce and I to take a walk up the lane.

I will linger awhile and commune with the white blossoms
before I come in for the night.