A fix-it weekend, and I have on occasion donned my GoFer hat, - and any other required accoutrements. (Runners are almost imperative)

A couple of weeks ago when someone asked me if I was still weaving, I had the gall to answer 'YES'...this in the face of a warp which has been hanging dejectedly for at least six months, waiting to be threaded and tied. I was abashed, and came home determined to get the warp ready for weaving. Which I did, and gained enthusiasm for my silk ribbon project all the while.

All was ready, and I put in the heading, and then a few rows of silk thread, but when I went to beat it down the whole warp slipped forward. Alas, the brake was out of commission... I could see what was wrong, but it was a matter for the Master Technician to deal with. When the cards fall thusly then I am no longer The Master Weaver, but just the Apprenticed GoFer.

A couple of years ago I posted the requirements for this position, and my advice to anyone who found themselves demoted to GoFer. A friend told me it was preferable to 'YouShould', but I'm not sure.

Anyway, between us we got the brake working on the loom, and I thought that might be the best time, within all the glory and praise and thanksgiving, to tell Charles about the washing machine leaking through the wall on to the bedroom rug....

This is a work still in progress, but it has advanced to the stage where the area under the washing machine has now been washed and polished, and all that remains is to push the machine back against the wall and hook up the various pipes and fittings.

Charles had to go to town this morning to pick up parts, and while there he went to see a traveling caravan of World War Two vehicles, and to talk to some of the men who were driving them.

Our daughter was there and took pictures...

And while Charles was away our granddaughter phoned from Nanton, Alberta. She was visiting the Air Museum
there, and talking to Veterans who were attending a special ceremony which involved the twinning of the Village of Nanton with the Village of Senantes, Oise, France.

You can read about the history of this Museum which honours all those associated with Bomber Command and those who participated in the British Commonwealth Air Training Plan on fields that dotted the Canadian prairies, by clicking the link above. 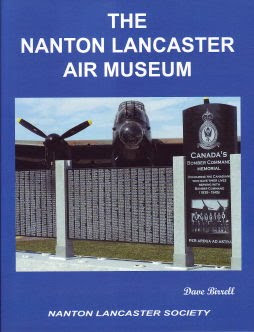 'The museum is the custodian of the Ian Bazalgette Memorial Lancaster that was Dedicated in 1990, to the memory of S/L Bazalgette VC who was born just 85 kilometres north of Nanton. S/L Bazalgette died near the Village of Senantes on August 4, 1944 in an attempt to save two of his injured crew members. He is buried in the village churchyard. ' 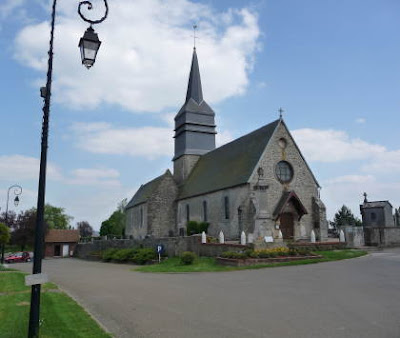 A day that stirred poignant memories....

Supper time rolled around, and I'm here to tell you about one of the perks the GoFer enjoys. Depending upon the amount of energy expended, she/he is privileged to forego the usual dinner time meal and offer peanut butter and honey sandwiches instead. (The Master Technician's favourite!)
Posted by Hildred at 7:04 PM 3 comments:

Tonight we are having a wonderful, welcome rain. The blue hills show faintly through the mist, and if you listen carefully when you go out you will hear sweet breathing and contented sighs coming from the garden.

Last night, and the night before the evening show was enchanting. 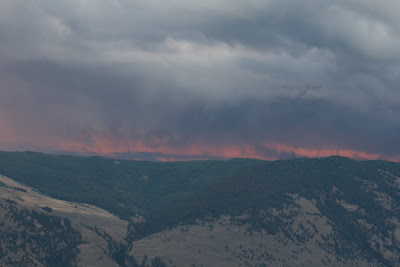 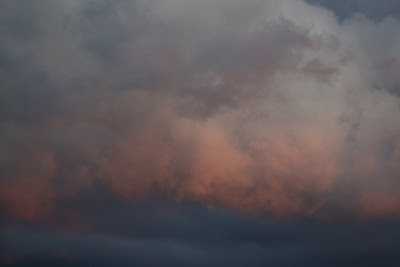 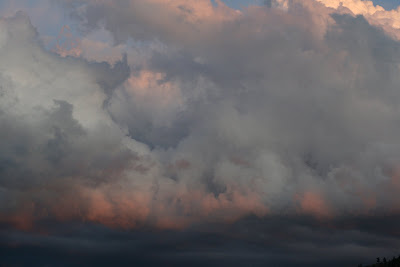 and Tuesday evening at 8.18

Just a preview to the fiery rolling clouds on Wednesday. 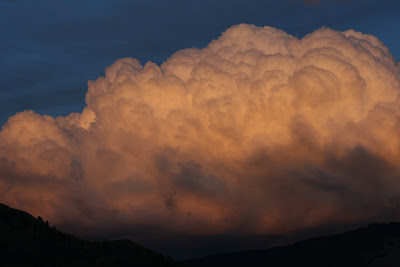 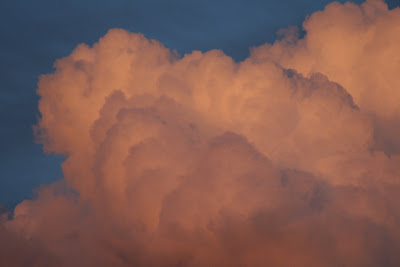 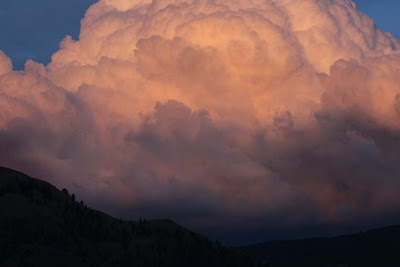 at 8.16 p.m. - and here's a bonus. Off to the north, a lovely quiet sky, watching all these fiery shenanigans with a certain serenity. 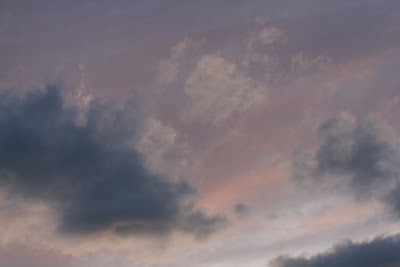 See wonderful skies from around the world at Sky Watch, by clicking here.
Posted by Hildred at 4:25 PM 16 comments:

D is for Dawn 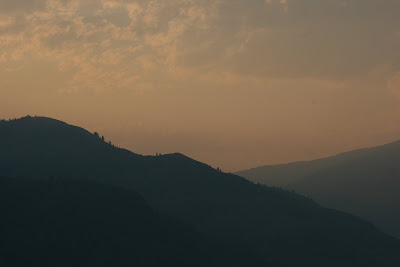 The sweetest time of the day. 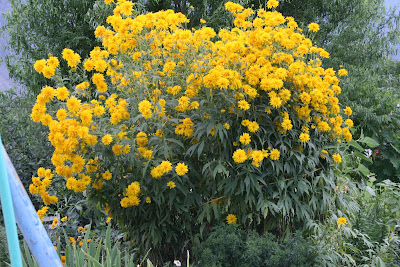 This is the infamous 'barn flower' which every August creates a glorious riot in the front garden.

I don't know it by its elegant name - I originally bought a piece in the lost garden, tucked in a little jog on the southwest corner of the house where it could erupt in all its golden joyousness in a confined space.

Here, where it got plunked towards the back of the bed, it is a beacon and a bane, albeit a beautiful one.

My header picture is a close up of the flowers on this ten foot plant. It has long, dark green, sawtooth leaves and the stems are branched and flexible, - all the better to spread an umbrella over the surrounding daisies and lilies and roses.

Is it familiar to anyone? Or must I go on loving its great exuberance and just calling it 'the common barn flower'........
Posted by Hildred at 10:04 AM No comments: