The sky was grey when we woke this morning, but in a while, about the time the sun decided to crest the hills, there were a few stray clouds that produced a rather lovely sunrise.  Around the house the walks were still icy from a chilly night, so I was confined to the deck with the camera, and of course with all the wires that bring civilization per se to village streets.  But I snapped a picture or two.... 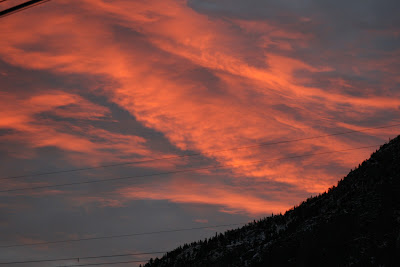 I manage to squeeze in under the wires.... 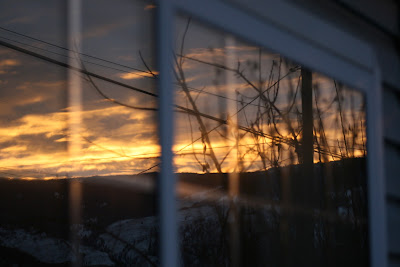 a reflection of the sunrise in the window

Soon the sky is overcast again, and I figure that probably the groundhog is still snoozing and has not caught sight of this fleeting sunrise....

When we were still on the farm we had a colony of groundhogs that lived in a mound of stones at the foot of the mountain at the furthest periphery of the sagebrush and desert.
They seemed to be quite prolific 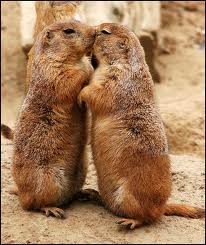 but their little colony was far enough away from the farm
(which also was rather prolific with six children)
and so we all lived in peace and I can't remember having the time to wonder about whether or not they were seeing their shadows, up there.

I would be very happy if we are not blessed with six more weeks of winter.
I have retrieved my garden journal from the bottom of the bookcase and am starting to make lists!!!

where will I put some cleome, some zinnias, some nicotiana
did I remember to bring down some spurge, and some barn flower plant
and if so where did I plant them.

I noticed that where I had pot marigold tucked into all the little corners they could find to establish themselves,  the previous owners here had miniature snapdragons.  They will have to learn to live together. 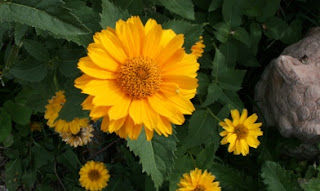 I think about the corner that was covered in black plastic when we came and where we deposited
the compost bin and planted day lilies all around it, leaving space
along the fence for a carnival of sunflowers. 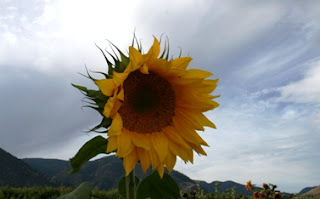 While I wait for spring I have been doing a bit of reading, and have more books
ordered at the library  Just finished the latest (I think) Lord John novel by Diana Gabaldon.
I wish she would hurry with the Outlanders  novel, - she left that poor child of  Bree and Roger's
underground, in dire straits, - sometime in 2013 she says she will publish.
I shall attempt to remain in good health until then....

I have two of the later books written by Edna O'Brien.  I have started the first,
'The Light of Evening' which I suspect is partly biographical.  The other one is "Wild December"  I can't
believe I have never become familiar with Edna O'Brien, but perhaps this is  because she is an Irish writer
and her books are not so readily published or purchased by libraries in Canada.
These are the only two I could find in the Okanagan Regional Library.

Charles and I are also taking advantage of the indoor weather to do a little downsizing!
There is just NO WAY that he needs that many pairs of heavy socks or five packages of new
white handkerchiefs that have never been opened, and having relieved his cupboard drawers
of all those extraneous socks and hankies he can feel quite light hearted and well organized
when he peers inside.

Well, that's all of this and that for the time being, I think.
Not much startling news here, but my sister did tell me last night that seventeen railcars of grain
went off the Fabyan trestle tracks and tumbled miles below
into the valley - maybe not MILES, but quite a way.  Far enough to smash them all
to smithereens.  They picked up all the grain, but I hope they left as few kernels for the
wild animals who inhabit the  Battle River valley. 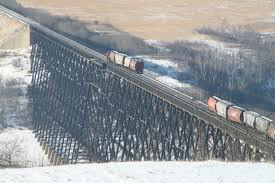 This is the trestle from which the missing cars in the picture above fell .
It was built in 1908 and is the second longest steel trestle bridge in Canada at
2775 feet long and 195 feet high.

ABC Wednesday
The letter this week is C


C is for such a lot of things, but the first thing I think about is C is for CAT


And so I give you a nice little Collage of Callie, the Calico Cat and friends 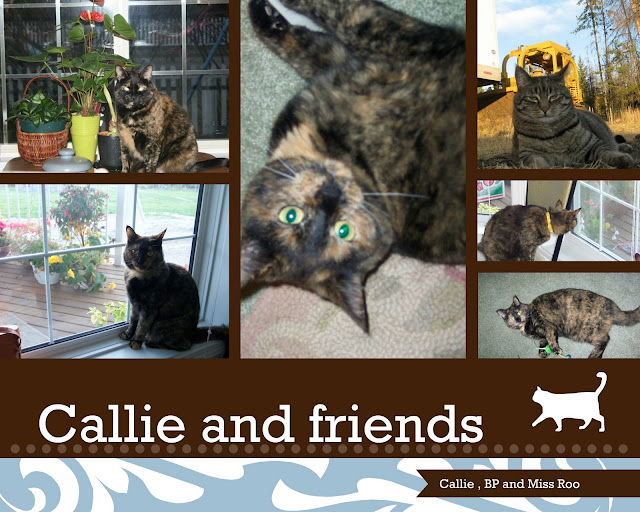 Miss Roo,  with the collar, came with us when we moved up the hill.  She was one of a pair of sweet little cats who had been abandoned, - her sister's name was Kanga, but unfortunately we lost her to leukemia.  Miss Roo was on her own, but soon had a wonderful territory to hunt in, across the road, amongst the grapes in the vineyard.  When we moved we did our best to acclimatize her to her new home, but she yearned for old familiar haunts.  Three times we brought her home from the old acreage, but the fourth time she wandered we lost her to a car as she crossed the road, on her way to what she considered home.


We went for almost a year without a cat, but then our grandson brought us Callie, - she was so much like Miss Roo, - a tiny little replica.  But you can see she has grown into a fairly large cat now!!!  My daughter would put her on a diet!!!  She spends an hour after lunch on Charles' knee, as he naps, and he is the one who grooms her.  For me she just has cupboard love!!!!


BP is our youngest son's cat, who he loves immensely, and who travels with him whenever he leaves the meadow.  He is a gentleman cat, in the true sense of the word!!!! 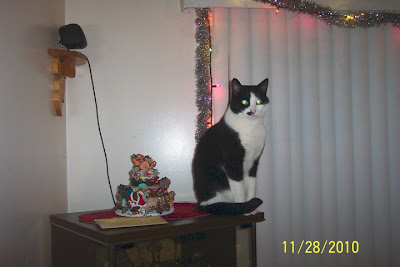 Here is Rebel, Dot and Frank's sleek and muscular cat, who maintains his figure by climbing to the top of cupboards, up screen doors, and various other forbidden places.
A real 'lad' who didn't make it on to the Collage because I didn't have a picture of him,
but certainly deserves to be there.

He is so conscious of looking in good shape that he has learned
to weight himself on the scale.  I kid you not!!!!


For more C's do visit here at ABC Wednesday, with thanks to all who make this meme such a pleasure .
Posted by Hildred at 8:32 PM 6 comments:

We waken sans duvet, which has been thrown off in the night as the open window brings in the warming air, reminiscent of early spring.

But of course it isn't - just a rare day in January when all the air currents are flowing the right way and our narrow little valley is protecting us from the winds that are blowing elsewhere in southern British Columbia.

I take the opportunity to shovel a little path to the compost bin, stir it up a bit and add more kitchen refuse, - I don't really think it is making much rich earth for the garden right now, but I look forward to that beautiful black loamy dirt, soft in my hands and full of all the good stuff that plants thrive on. 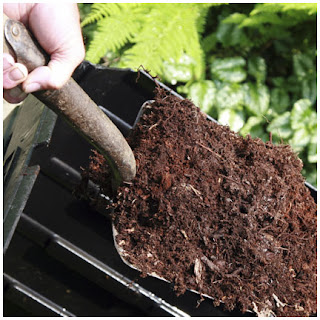 There is a lovely apple green china kitchen compost container in the drug store
(where you can buy anything).
So far I have resisted bringing it home but I look each time I go in, and
eventually I suppose it will find a spot in my kitchen. 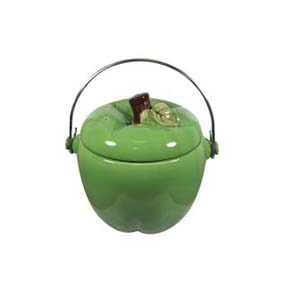 I had another peek at it this afternoon when I went to buy some birthday cards.
Then I went to the grocery store where the produce section has just been revamped.

'Just like uptown' I told the produce section manager.

To celebrate, and probably help pay for these sophisticated vegetable bins, they have imported a great variety of exotic fruits and vegetables, and I was moved to buy some in order to
make Charles' breakfast more appealing, and provide a change from the usual orange and Ambrosia apple, - not that they aren't delicious.

I bought a golden passionfruit, a Star fruit, whose proper name I don't know,
and a Honey Pomelo.  They are lounging around on
the kitchen counter looking quite exotic. 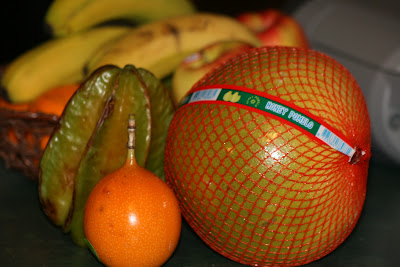 Besides a little passion from the Passionfruit, and some star-shaped slices from the Starfruit, I expect that the  Pomelo at least will contribute lots of pith and rind to the green apple kitchen compost and boost the health of the rose roots, come June.

The weather report forecast flurries overnight, so perhaps we will be glad of the duvet.
Posted by Hildred at 8:27 PM 3 comments: