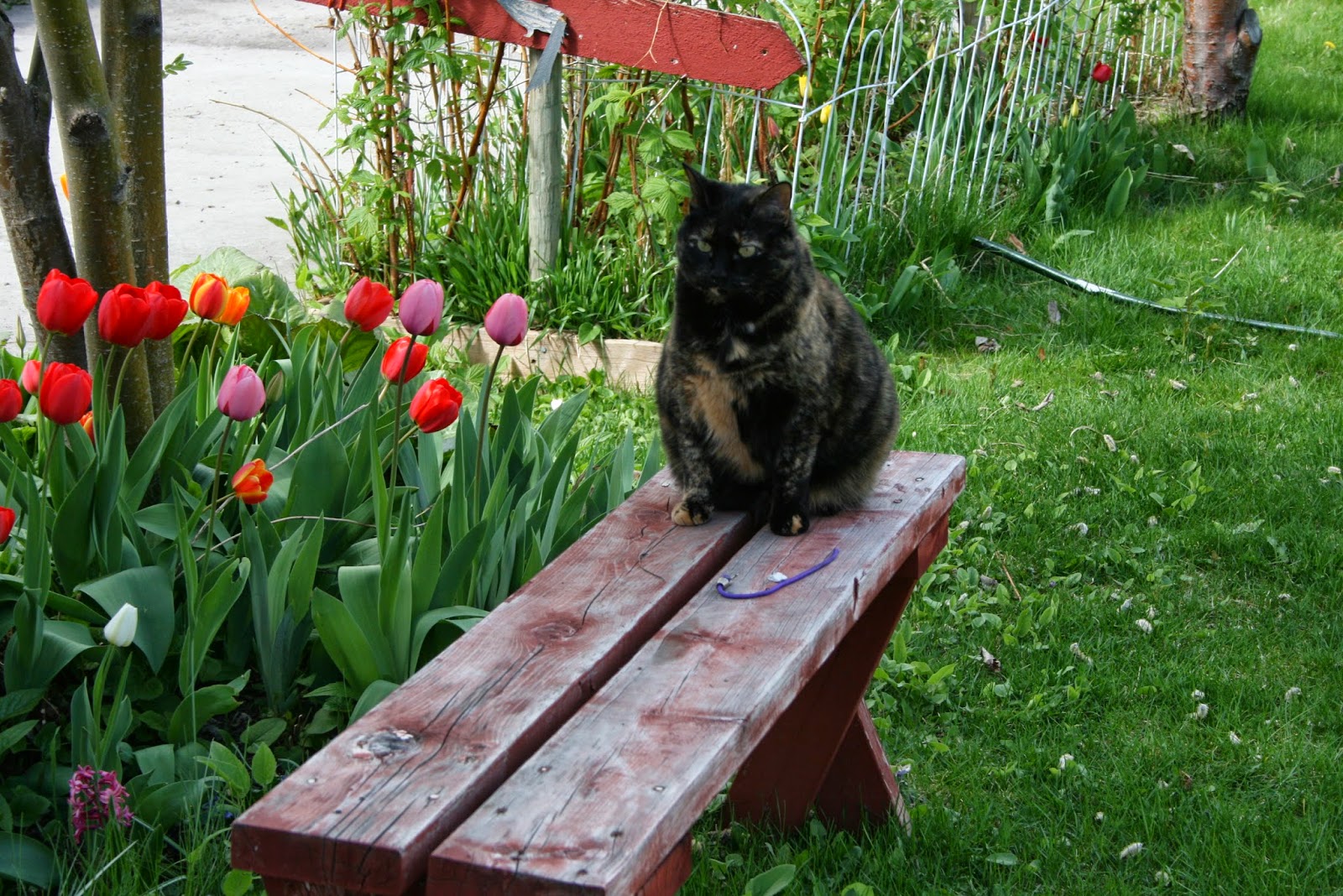 And I stir up dirt, a little bit of this, a dab of compost, some potting soil,
a smidgin of vermiculite
and a thimble full of 'Feed and Forget.

I make up a pot of yellow begonias, pansies and sweet alyssum
to take to my daughter across the lane.

Tuesday, when it was our elder daughter's birthday and it was still April,
we drove along to Ginty's Pond with the camera
and were mesmerized by the beautiful greens
and the sun shining on last year's candled rushes. 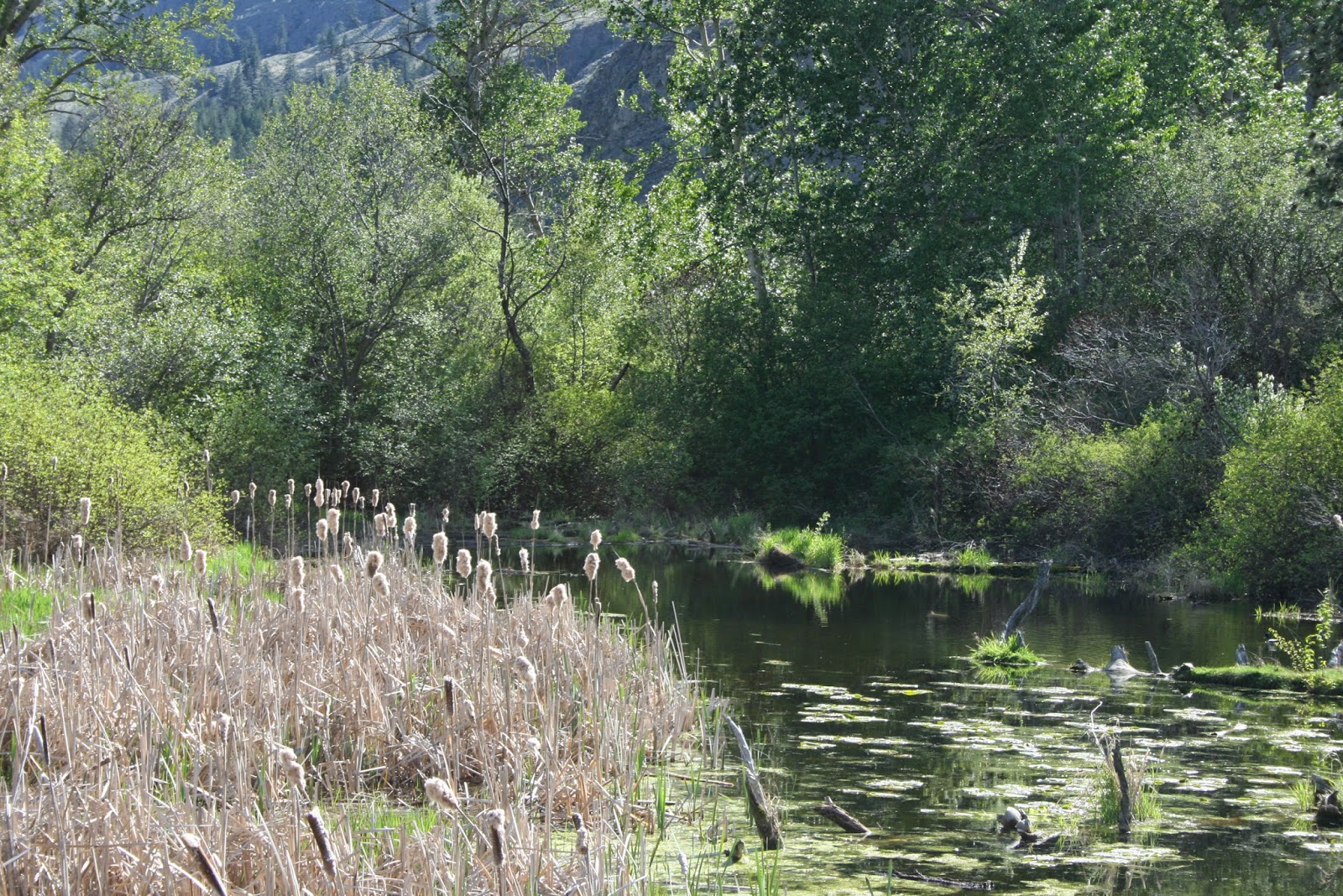 and the neon green clump of grass reflected in the still waters.

I went to visit the hill garden, - up the lane
lined with the beautiful curly willow
that Charles rooted and planted and watered and nurtured -
a sweet remembrance of him 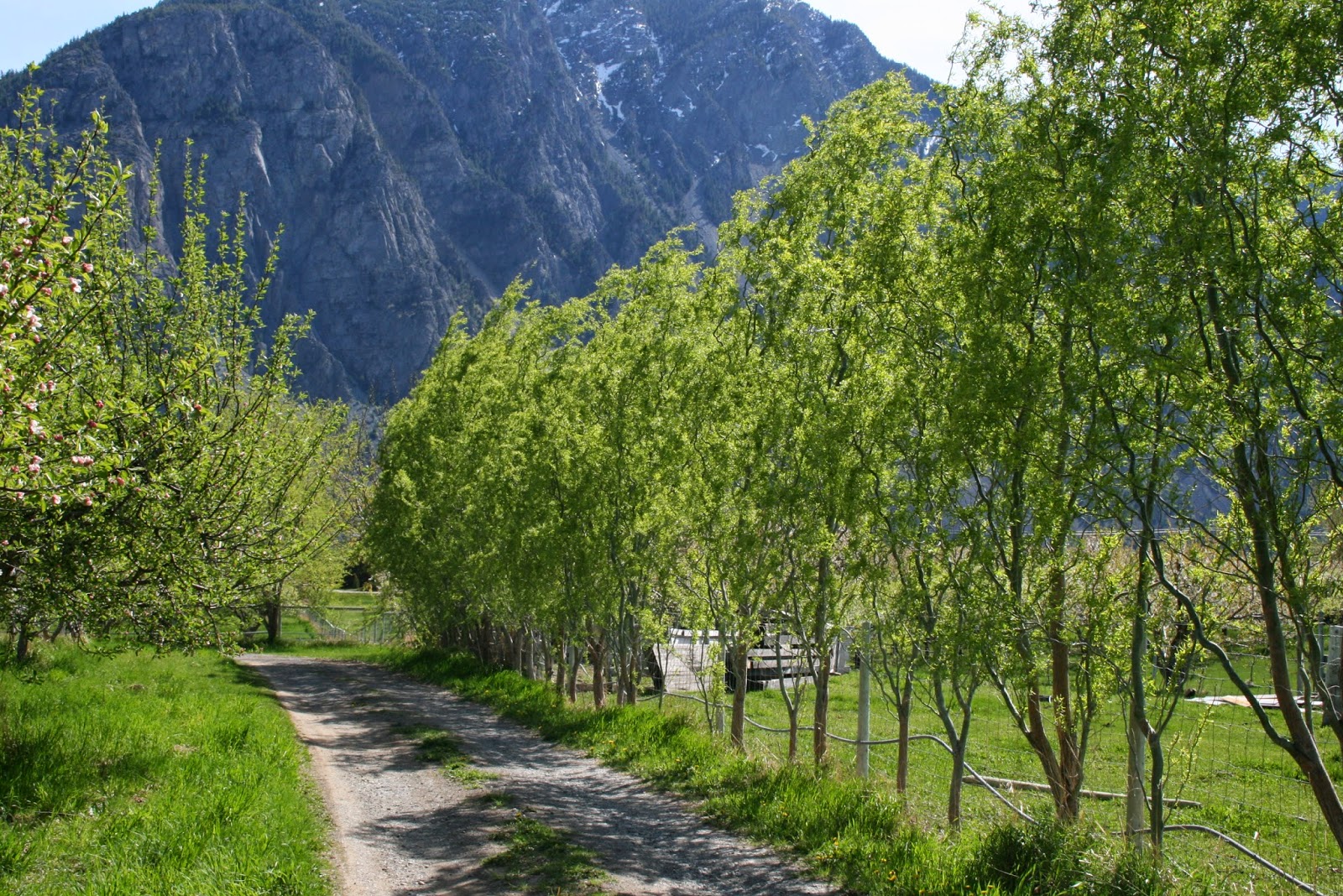 and to the garden shop for some blue lobelia.... 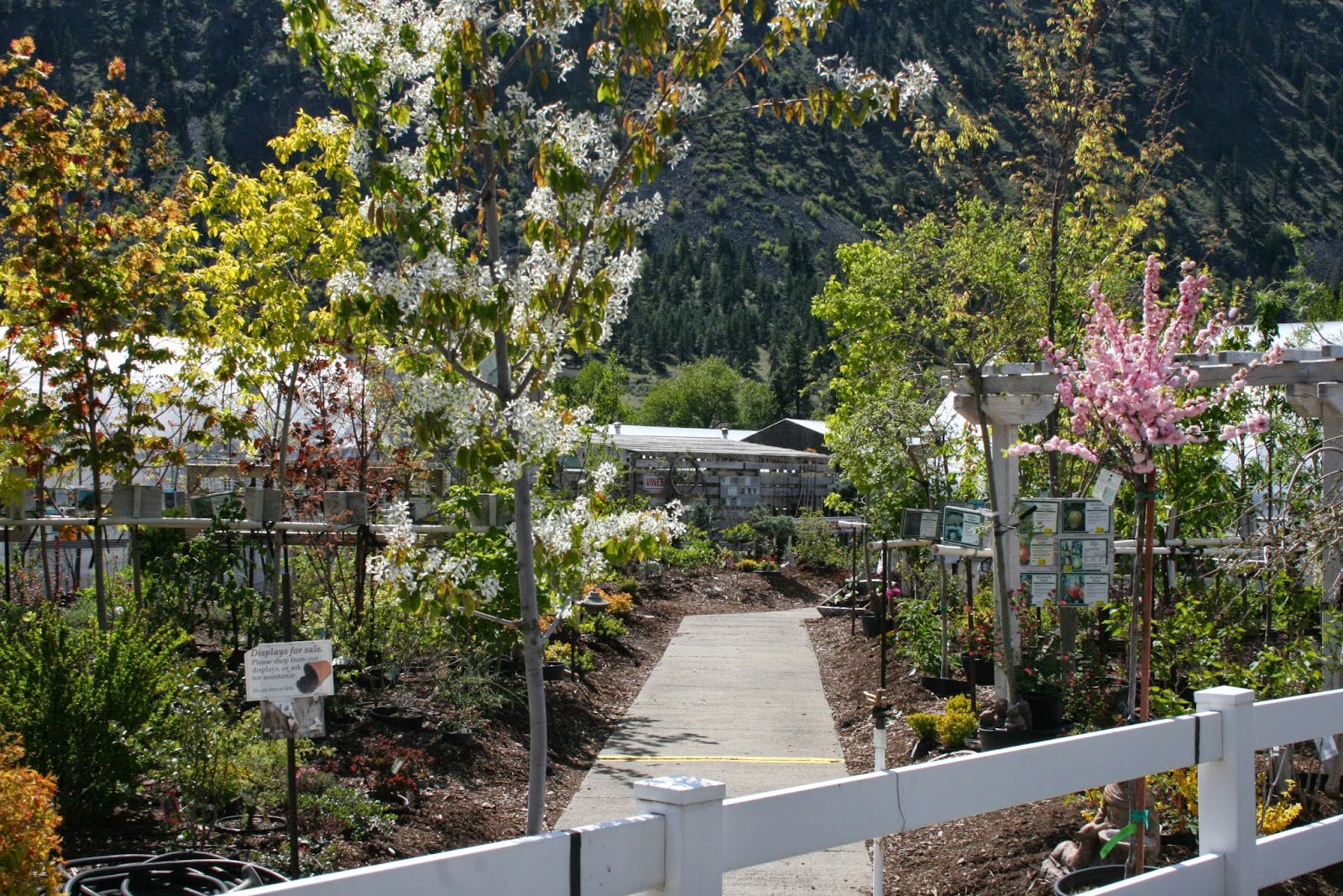 Transfixed with spring I found two lovely poems
from the days when I was young and romantic, - when
I loved Sara Teasdale, and was in awe of Goethe.

A delicate fabric of bird song
Floats in the air,
The smell of wet wild earth
is everywhere,
Oh I must pass nothing by
Without loving it much,
The raindrop try with my lips,
The grass with my touch;
For how can I be sure
I shall see again
The world on the first of May
Shining after the rain?
Sara Teasdale May Day

How fair doth Nature
Appear again!
How bright the sunbeams!
How smiles the plain!
The flow'rs are bursting
From every bough,
And thousand voices
Each bush yields now.
And joy and gladness
Fill ev'ry breast!
Oh earth!--oh sunlight!
Oh rapture blest!
Oh love! oh loved one!
Goethe, May Song

And most wonderful of all!
Just tonight I have news of the birth of our fifth Great Grandchild!

What more glorious for springtime and the first of May!!!

The letter is P this week...

Amongst the many poems dedicated to The Duck-billed Platypus I have chosen THE DIPLOMATIC PLATYPUS by Patrick Barrington, the 11th Viscount Barrington of Ardglass (1908-1990). 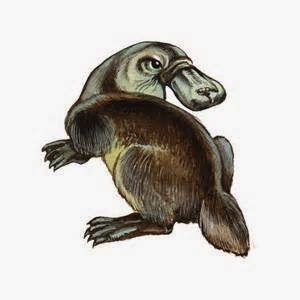 Patrick Barrington was famous for his humorous verse, popular in Punch in the 1930's.

He was unmarried, and upon his death in 1990 the peerage he held became extinct.  But the Platypus lives on to entice poets with its inviting name and curious attributes.

I had a duck-billed platypus when I was up at Trinity,
With whom I soon discovered a remarkable affinity.
He used to live in lodgings with myself and Arthur Purvis,
And we all went up together for the Diplomatic Service.
I had a certain confidence, I own, in his ability.
He mastered all the subjects with remarkable facility;
And Purvis, though more dubious, agreed that he was clever,
But no one else imagined he had any chance whatever.
I failed to pass the interview, the board with wry grimaces
Took exception to my boots and then objected to my braces,
And Purvis too was failed by an intolerant examiner
Who said he had his doubts as to his sock-suspender's stamina.
Our summary rejection, though we took it with urbanity
Was naturally wounding in some measure to our vanity;
The bitterness of failure was considerably mollified,
However, by the ease with which our platypus had qualified.
The wisdom of the choice, it soon appeared, was undeniable;
There never was a diplomat more thoroughly reliable.
He never made rash statements his enemies might hold him to,
He never stated anything, for no one ever told him to,
And soon he was appointed, so correct was his behaviour,
Our Minister (without Portfolio) to Trans-Moravia.
My friend was loved and honoured from the Andes to Esthonia,
And soon achieved a pact between Peru and Patagonia.
He never vexed the Russians nor offended the Rumanians,
He pacified the Letts and appeased the Lithuanians,
Won approval from his masters down in Downing Street so wholly, O,
He was soon to be rewarded with the grant of a Portfolio.
When on the Anniversary of Greek Emancipation,
Alas! He laid an egg in the Bulgarian Legation.
This untoward occurrence caused unheard-of repercussions,
Giving rise to epidemics of sword-clanking in the Prussians.
The Poles began to threaten, and the Finns began to flap at him,
Directing all the blame for this unfortunate mishap at him;
While the Swedes withdrew entirely from the Anglo-Saxon dailies
The right of photographing the Aurora Borealis,
And, all efforts at rapprochement in the meantime proving barren,
The Japanese in self-defense annexed the Isle of Arran.
My platypus, once thought to be more cautious and more tentative
Than any other living diplomatic representative,
Was now a sort of warning to all diplomatic students
Of the risks attached to negligence, the perils of imprudence,
And, branded in the Honours List as 'Platypus, Dame Vera'
Retired a lonely figure, to lay eggs in Bordighera.

For more entertaining and educational P's visit here at ABC Wednesday with thanks to Roger, Denise
and all who visit and maintain this most Popular meme.
Posted by Hildred at 9:21 PM 6 comments:

Out in the garden first thing in the morning, getting all squiggley and dirty,
mixing soil and planting potatoes in the potato planting bag I bought last spring,
- just like this one only orange..... 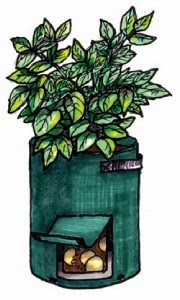 You will notice the nice little flap at the bottom of the bag that enables you to  feel around
for those first small baby potatoes that are so delicious
with a bit of mint!

I had a few nicely sprouted potatoes left, so found a little spot at
the bottom of a bird house my
son-in-law made for the back garden
and tucked them in with a pat on the head and
a nice covering of potting soil and compost.

Time for coffee and a shower, and then I dressed
for an afternoon event.

The 100th Anniversary of the establishment of the Royal Purple Lodge,
an adjunct to the Benevolent Order of Elks.

I have belonged to the Purple for many years, and have many dear
friends amongst the organization.  It suffers from a lack
of new memberships among the young as so many
of the old institutions do.
New generations and new ways of doing things.
As a result we are small in numbers, but the bonds are strong.

To celebrate we had a Friendship Day, inviting friends in other Lodges to attend;
coming, if they wished, in fashions of a century ago.

I wore a big hat, white gloves, a nightgown ensemble I fashioned into a tea dress. and carried an old fashioned bag. Many others came in similar costumes, although I think mine was the only nightgown there! 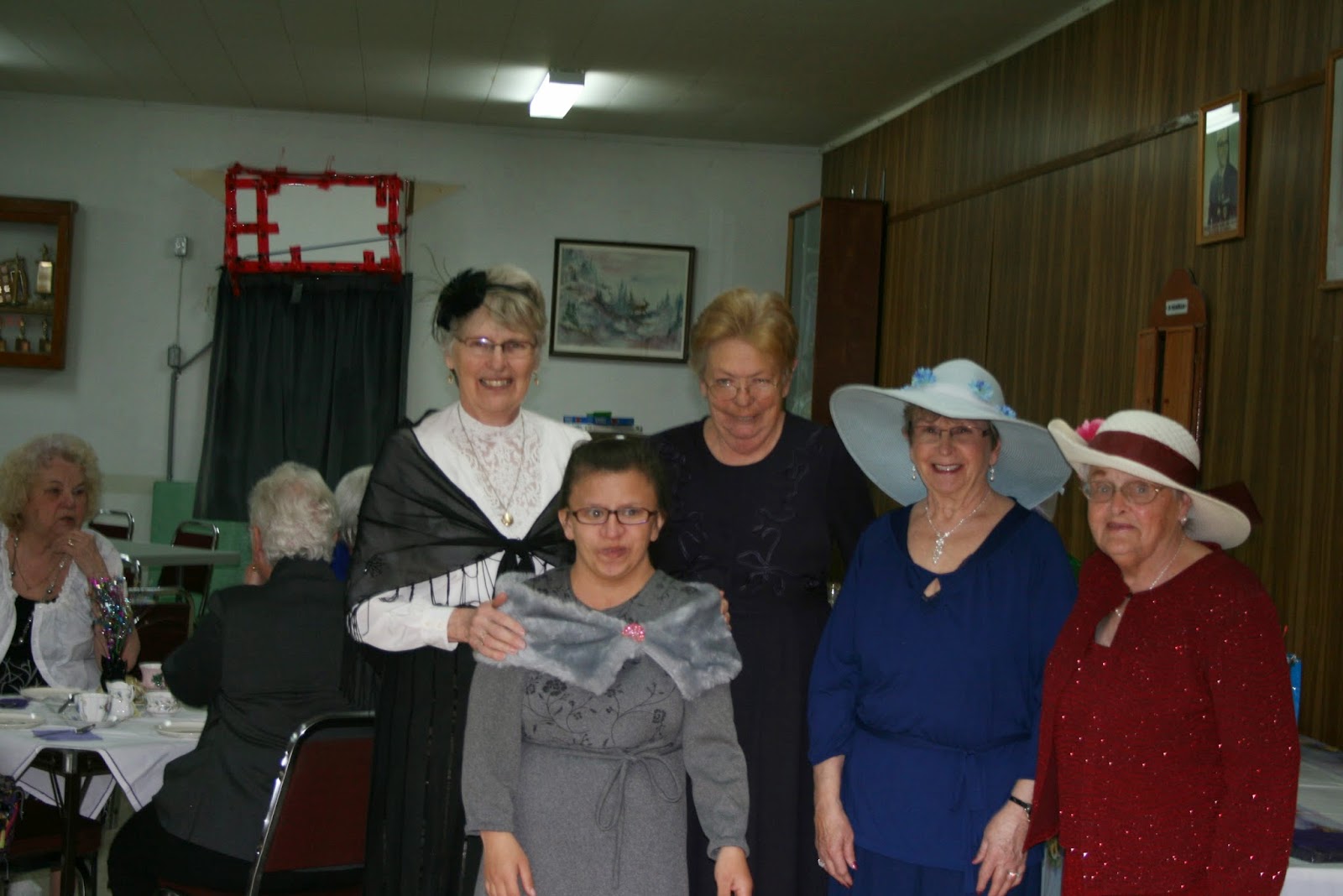 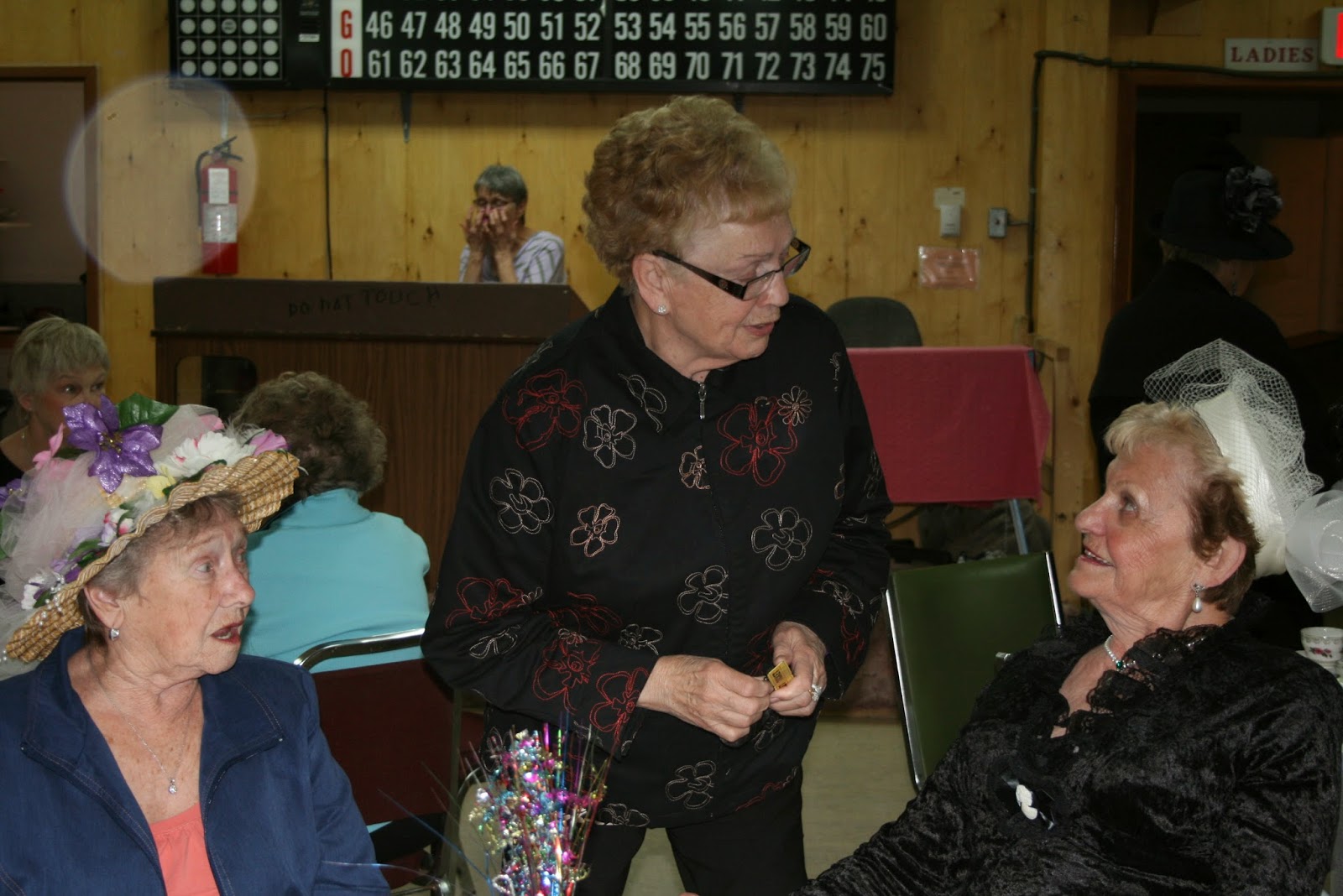 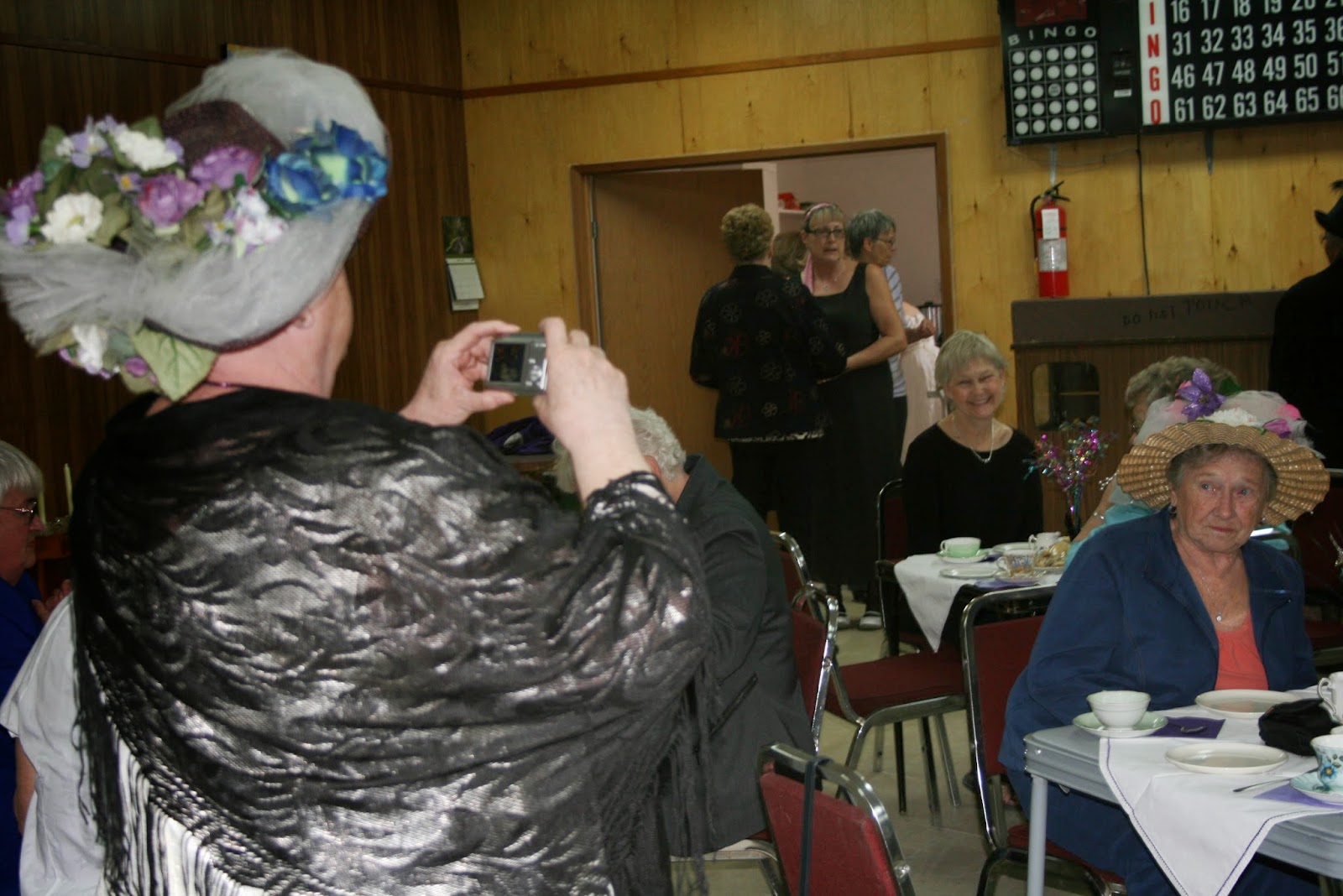 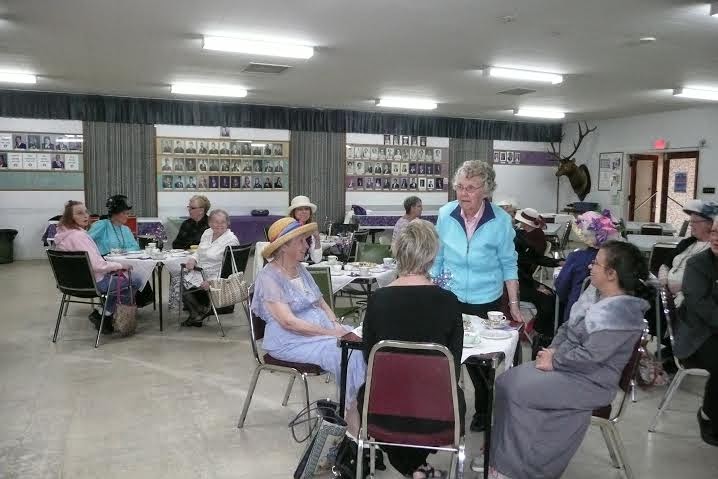 We had a delicious old-fashioned tea with fancy sandwiches and welsh cakes
and strawberry shortcake, and then played games that were popular in the parlours
of the country one hundred years ago.

Snakes and Ladders, Pick up Sticks, Tiddly Winks and Dominoes,
and I have to say, considering the age of these ladies,
most appropriate in that they were not too mentally strenuous
that they interfered with conversation!! 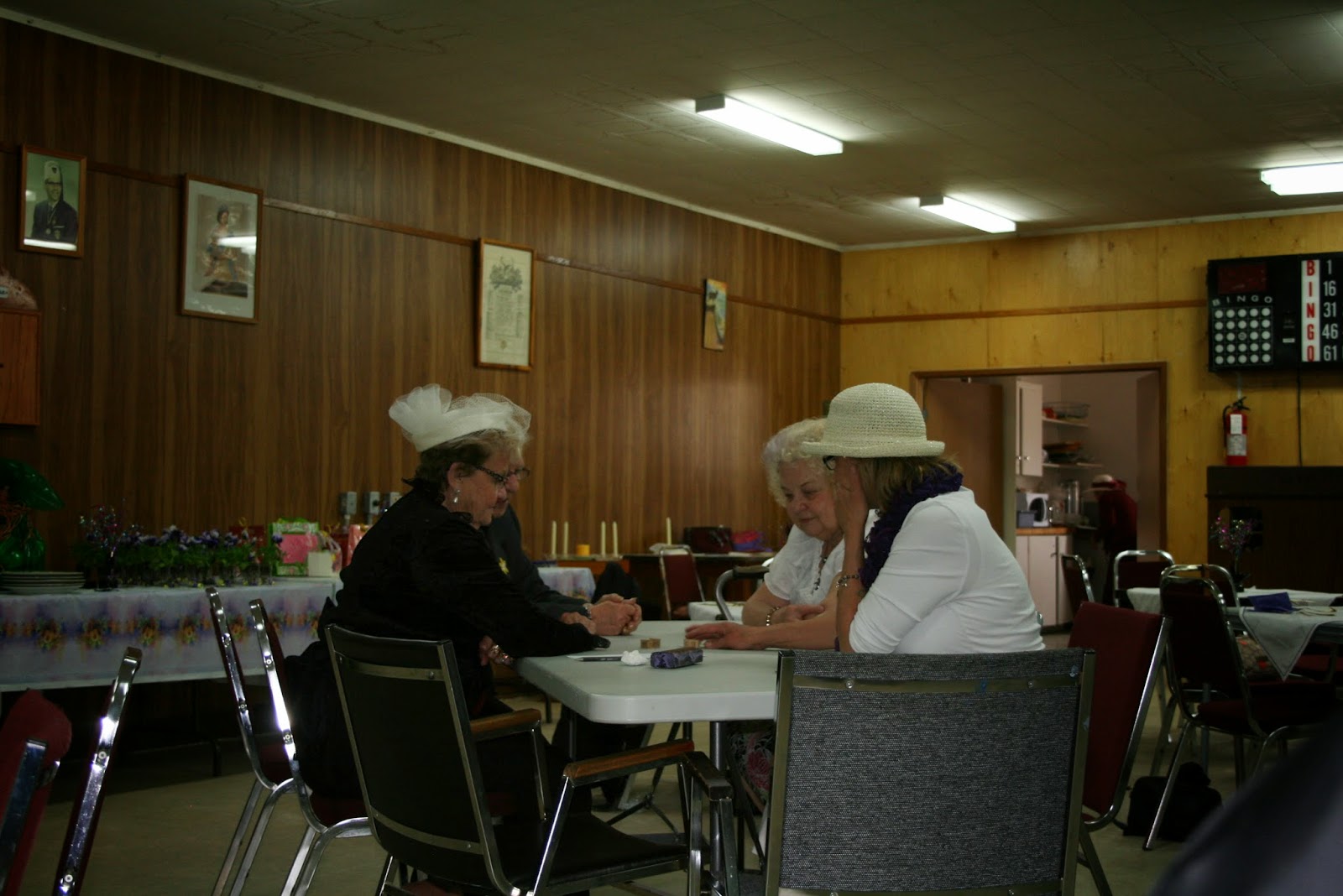 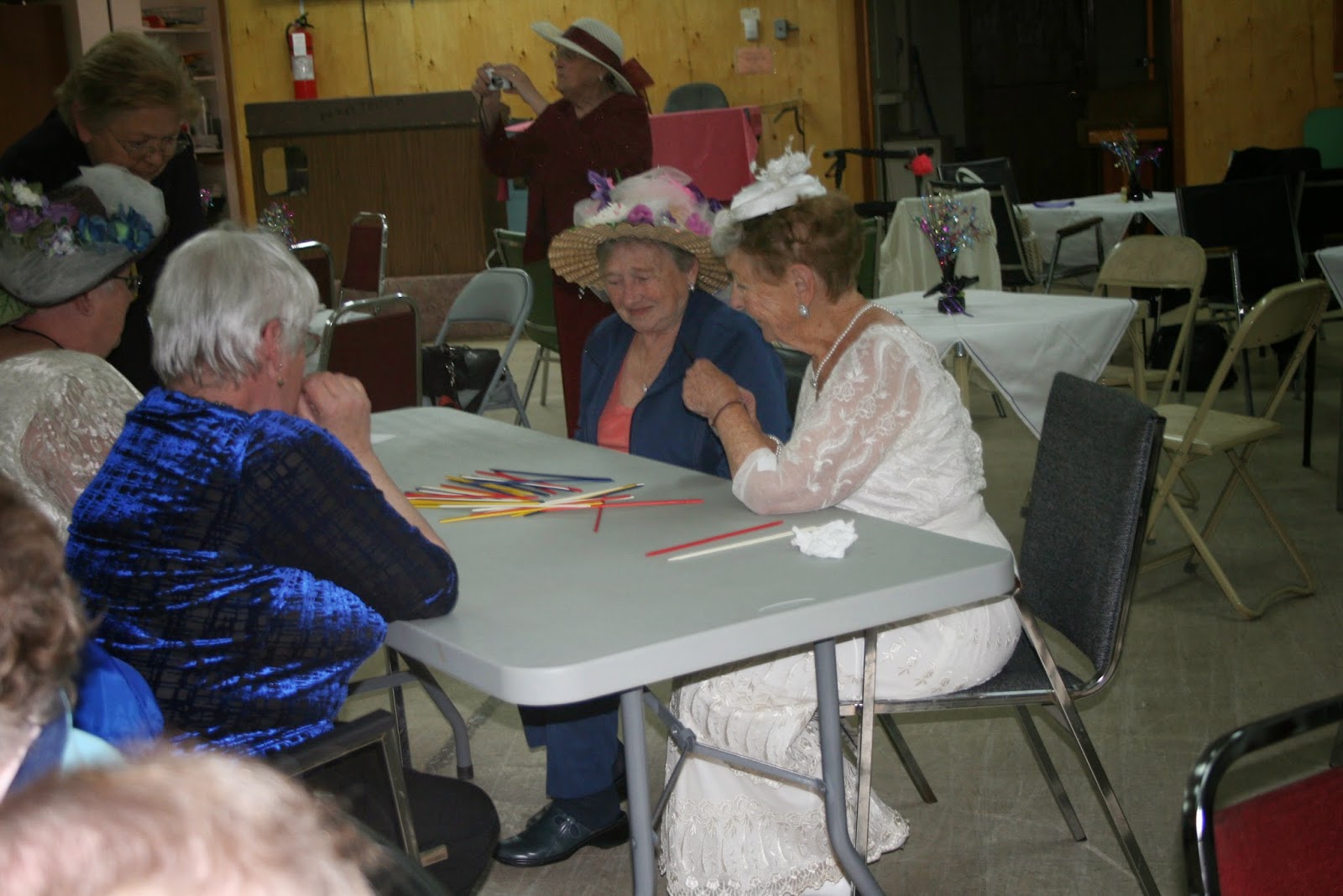 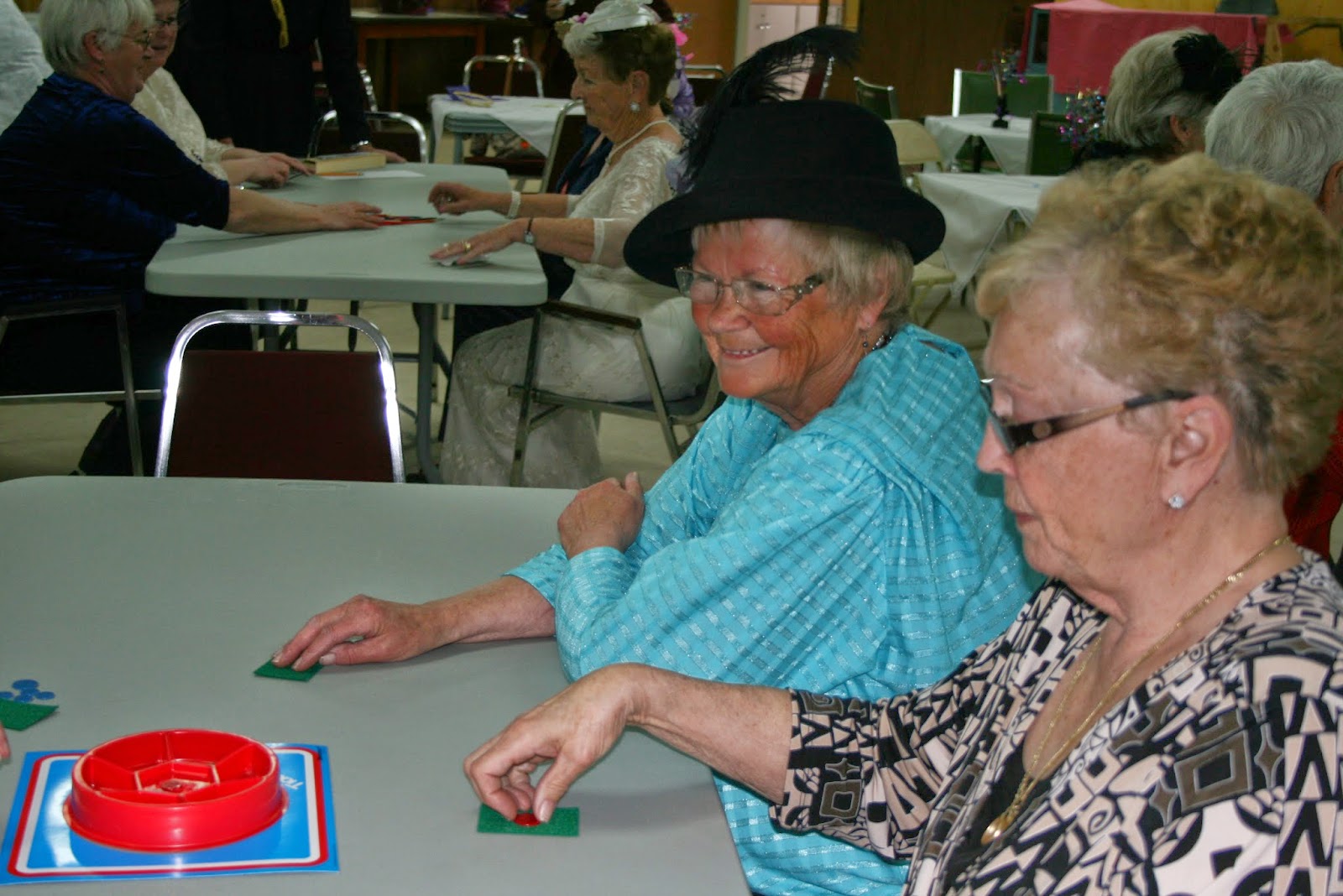 We all had a perfectly lovely time and I came home and had a small drink of
Orange Brandy and a pleasant dose of Reminiscence. 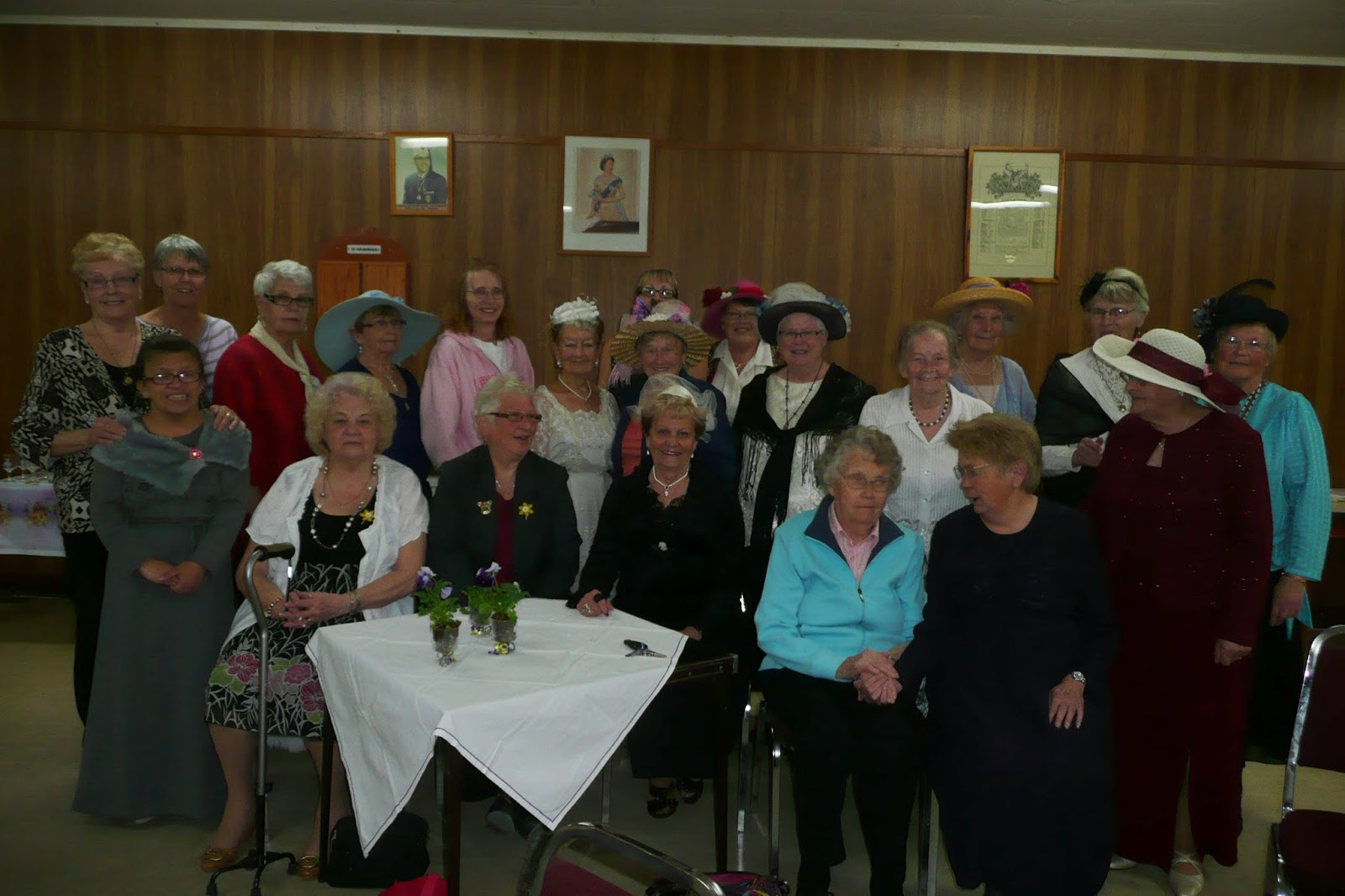