I waken to thin clouds and cool breezes, and although they may not survive the morning, still, it is pure luxury to feel the refreshment they bring after a week of scorching weather.

It is 'White Rabbit" day, - the first of August, and I pay my dues to the lucky fellow before I speak on the phone to my daughter's morning call.  As I wander down the hallway to unlock doors and open windows to morning breezes and cool air I pass the door to the loom room (where the loom languishes, untended for a number of warm gardenig weeks) and I whisper a promise to return.

It is so easy to drift, living alone, and so I took myself in hand and made a disciplined list of 'things to do". July was the month to attend to files and all those other legal things one must do, but August! - August is the month I have set aside for weaving, building up my enthusiasm as I shredded all those dratted papers in July.

The door to the loom room is hung with silk ribbons, cut from old silk blouses and awaiting the magic to turn them into soft, silk matts, braided skeins of silk and polwarth fleece to spin, and dyed warps and weft. 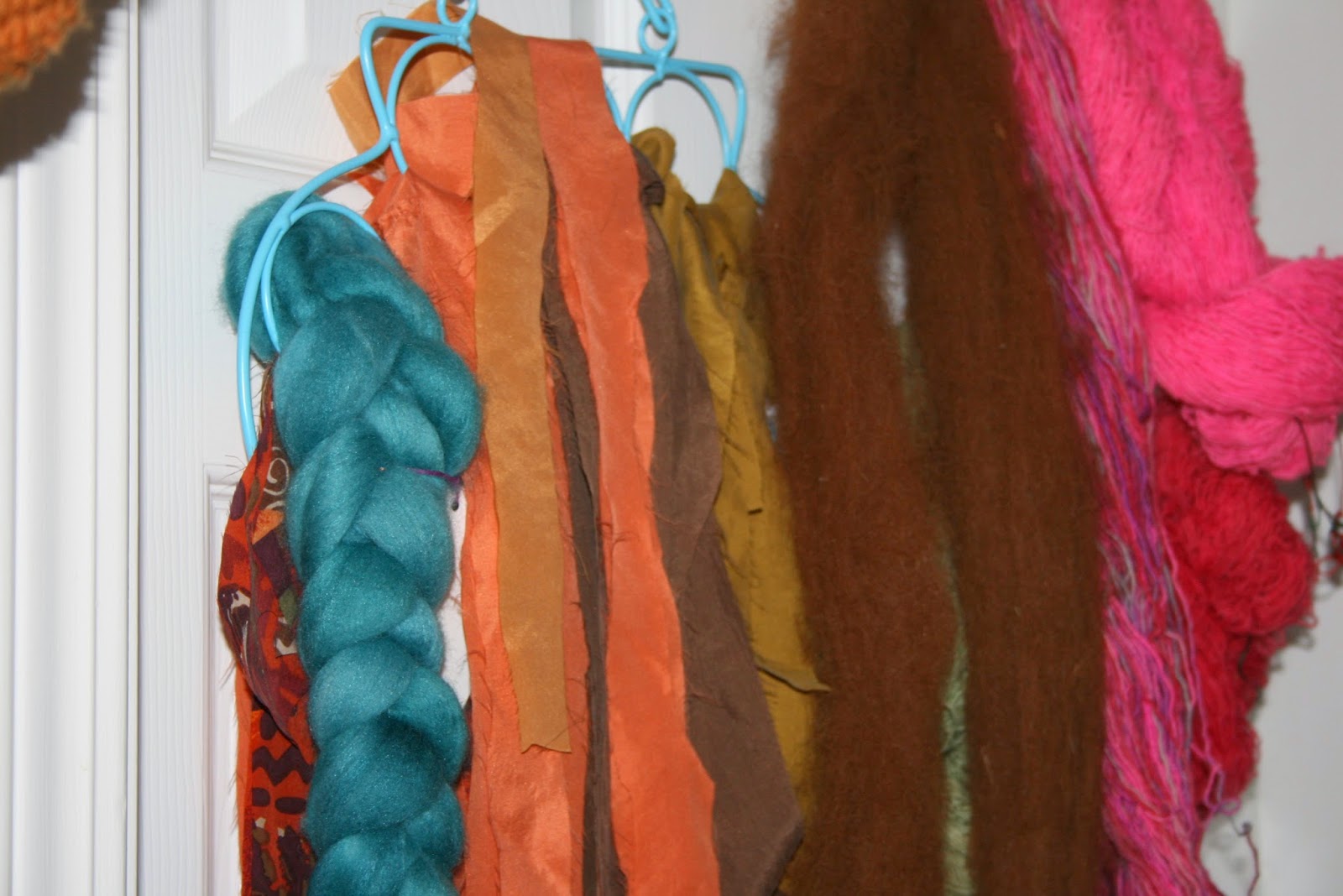 So there is no reason to delay. And can you think of anything better to do with August, when the heat confines the garden to hardy yellow daisies and mums and sedums preparing to bloom, and the only thing to do is to keep the pots well watered so the nicotinia doesn't fade and die and rob one of that gorgeous evening scent. 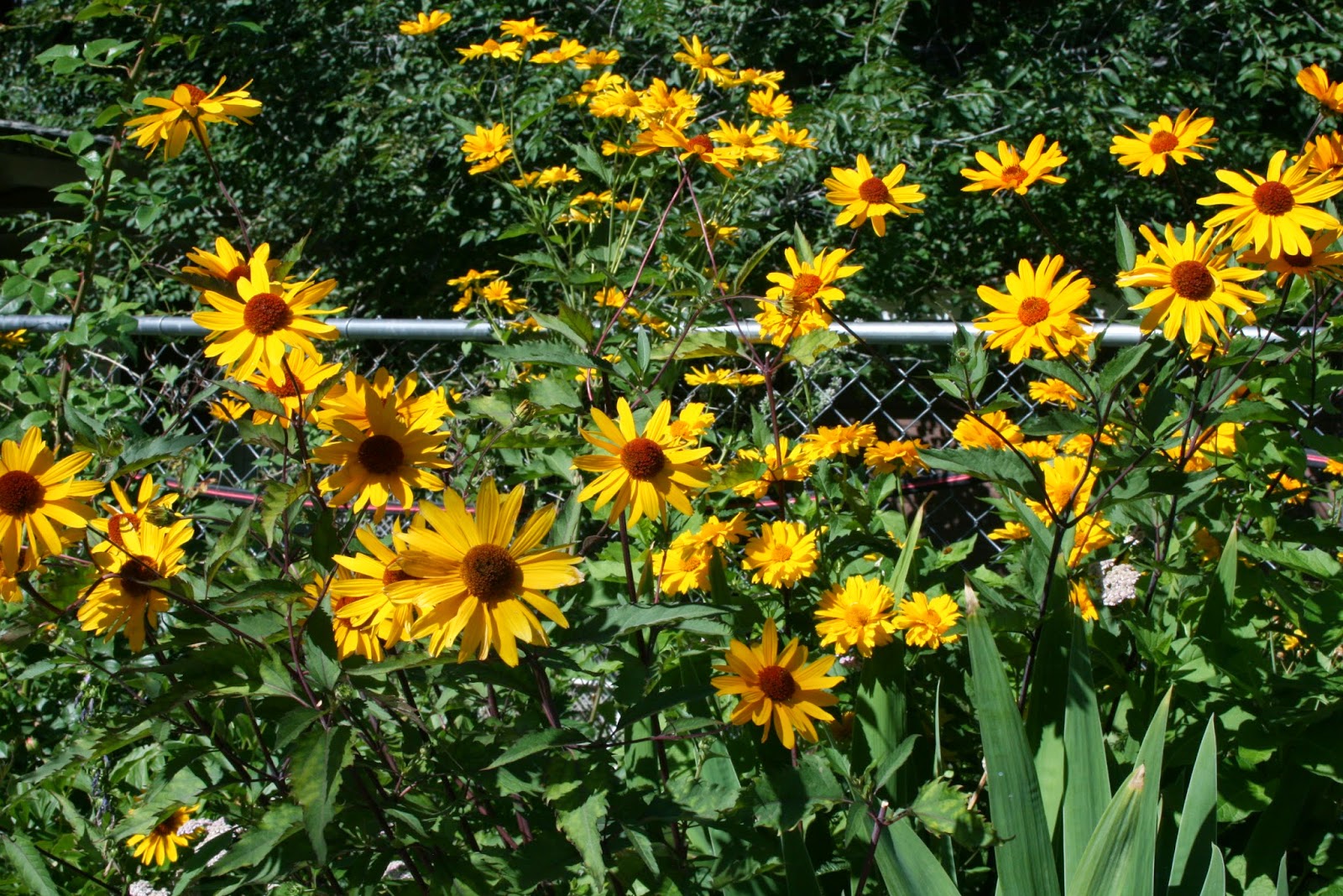 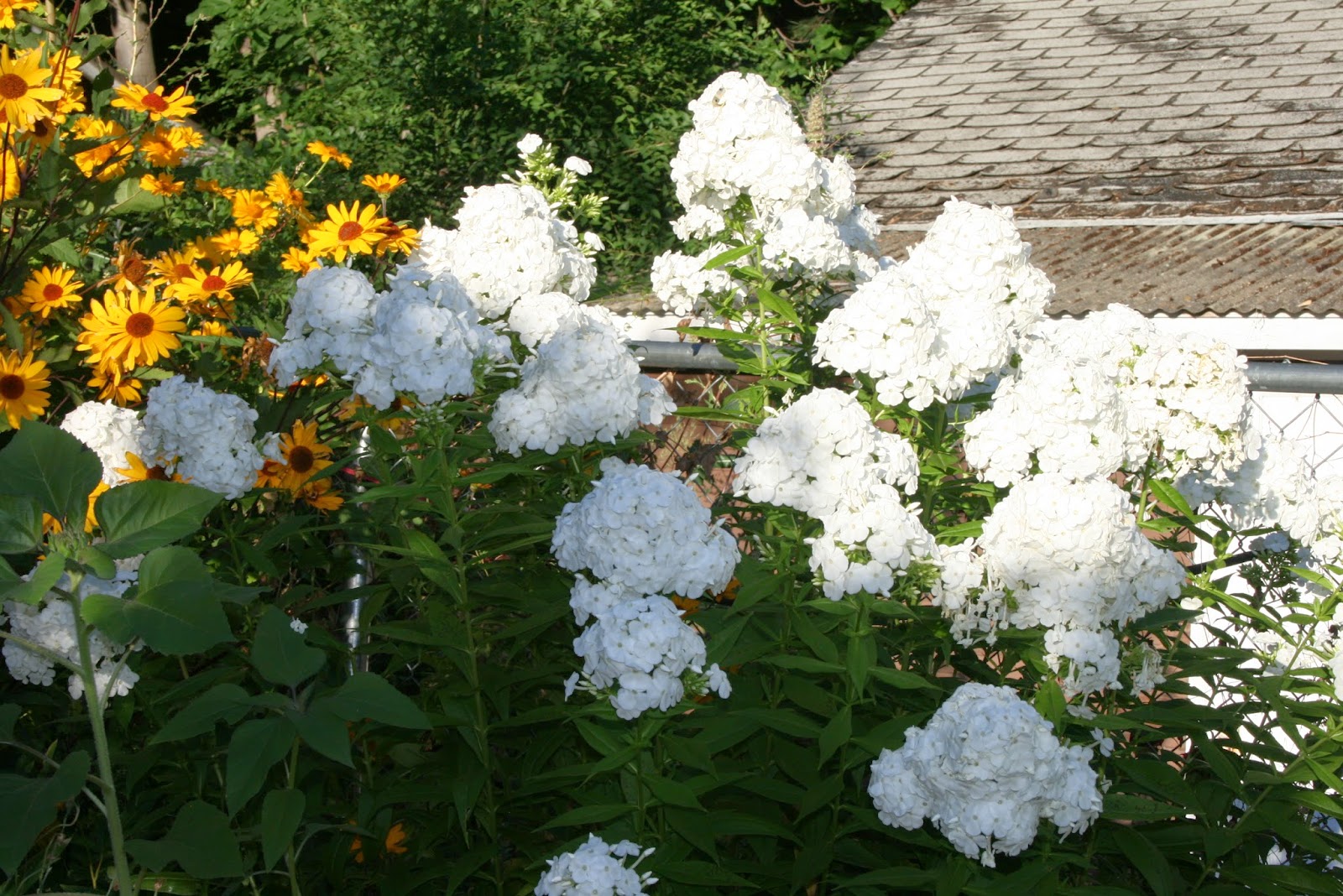 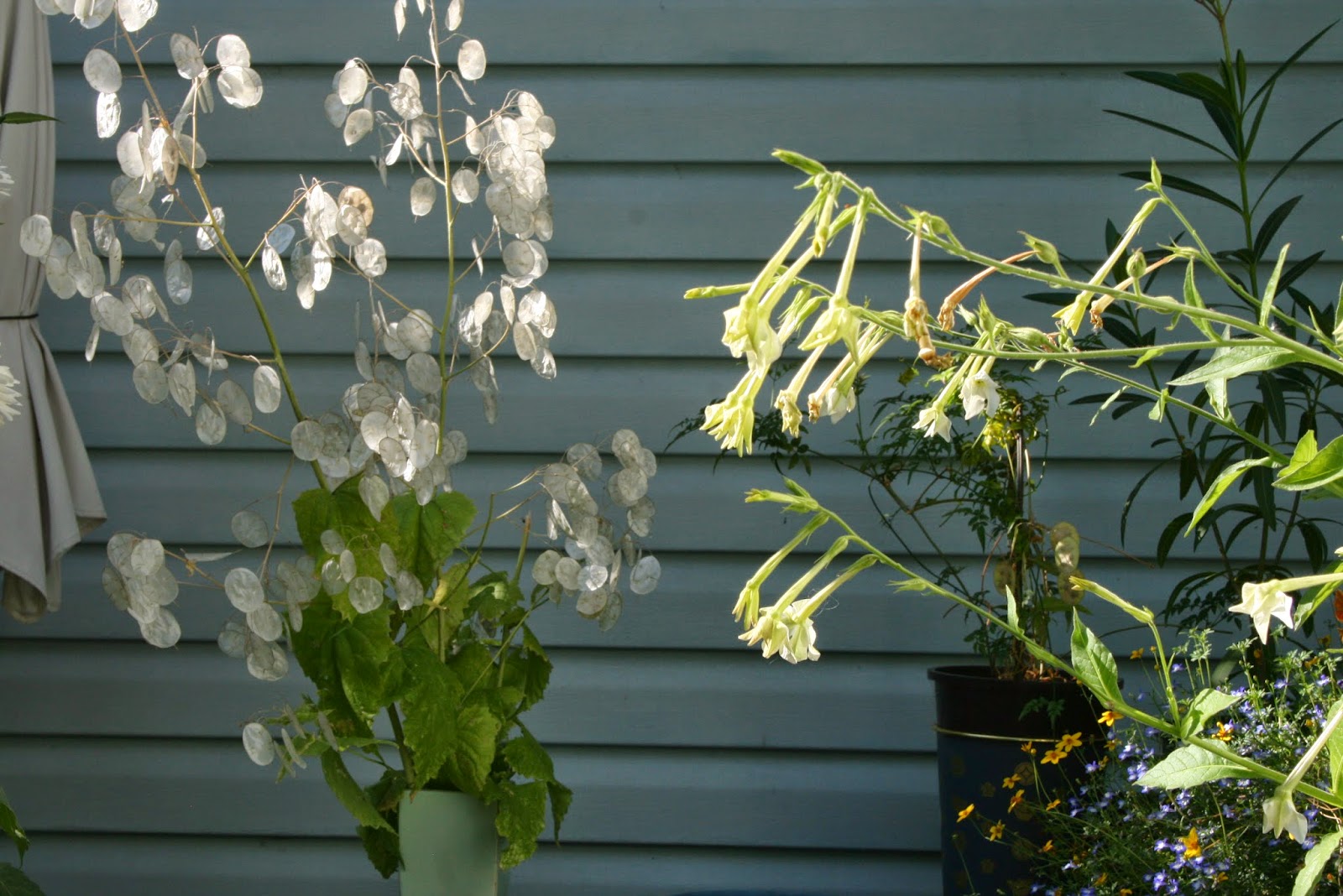 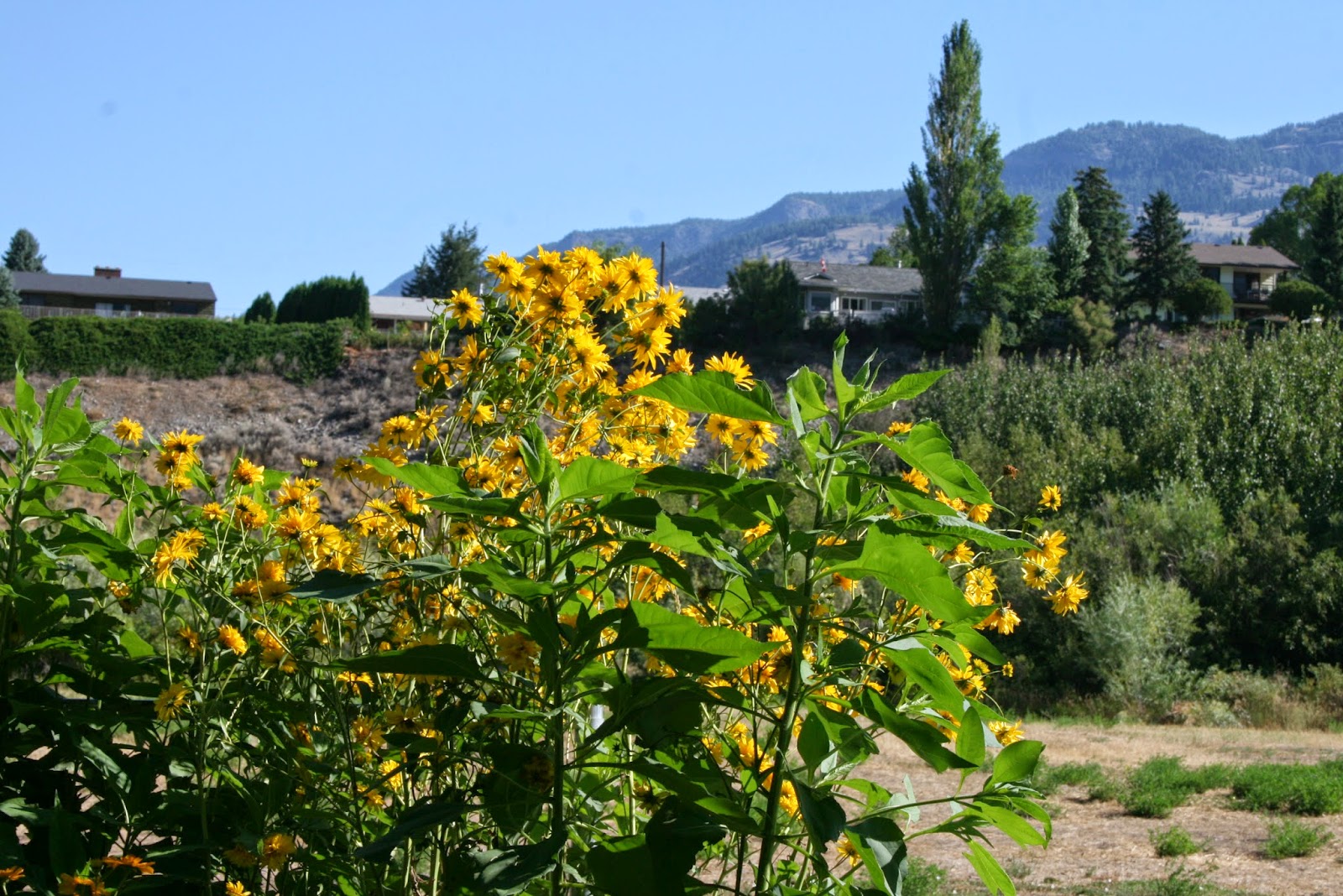 I see the sun has broken through the clouds and sends its rays through the branches of the hazel nut tree outside my window - soon it will be time to close up the house to dissuade the heat from entering, but I have a lovely place to retire to and so I am off to keep my promise to the loom.......

Robert Louis Stevenson speaks to the child in us, to whom summer was never too hot or uncomfortable and the sun was there 'to please the child, to paint the rose, the gardener of the world, he goes.'

Great is the sun, and wide he goes
Through empty heaven with repose;
And in the blue and glowing days
More thick than rain he showers his rays.

Though closer still the blinds we pull
To keep the shady parlour cool,
Yet he will find a chink or two
To slip his golden fingers through.

The dusty attic spider-clad
He, through the keyhold, maketh glad;
And through the broken edge of tiles
Into the laddered hay-loft smiles.

Meantime his golden face around
He bares to all the garden ground,
And sheds a warm and glittering look
Among the ivy's inmost nook.

Above the hills, along the blue,
Round the bright air with footing true,
To please the child, to paint the rose,
The gardener of the World, he goes.  RLS

Oh, if we could only retain that wonderment and lovely friendship with the warmth of the sun that was such a beautiful part of childhood summers.

ABC Wednesday
July 30th, 2014
The letter is C and it stands here for Chinese (Asian) Pears.

The Chinese Asian Pear is called the Shinto Pear, and it is delicious!

Asian pears are super crunchy, more like crisp apples than other pears,
and they look more like apples, too.

There are many varieties of Asian pears -  the ones post commonly available in North America
are a very matte, tan color with a bit more texture and roughness to the skin than other apples or pears.

They are great for eating raw, especially when sliced or diced and added to salads.
They have more of a crisp-apple texture than the soft grainy pear.
They are heavy for their size and have no give when you squeeze them -
they are supposed to be crisp!

I am lucky in that at least once a year I get to have one or two
Chinese pears grown by a generous friend of #3 son
and I enjoy them raw, sliced with cheese and a crisp biscuit.

This is a sweet and savoury dish, popular in south-west China.

Lay about 1 1/2 pounds of ham, cut into thin slices, in a steamproof dish.
Sprinkle with a quarter cup of brown sugar and steam for 25 minutes,
adding more water as needed.

Add two Chinese pears, cut into four pieces.
Brush the pears and ham slices with some of the sauce and steam for five more minutes.

Pour the remainder of the sauce over and garnish with two green onions,
cut into thirds, - or however your heart desires
if you want to be creative.....

I was amazed at how many different varieties of Asian Pears there are.
The best known is probably the Nijisseiki which ripens in mid September
and is also known as 20th Century.

But in the order of ripening there is the Ichiban Nashi, the Kosui, Shinseiki, Mishirasu,
Chojuro, Shinseiho, the Kikusui, Shinko (as pictured below) the very large Nitaka,
a round shaped Chinese pear called Seuri and the Korean Giant,
very large, attractive orange-brown russet, sweet and juicy
with a long storage life.

All this wonderful information about Asian pears that produce well west of the Cascades
came from ' wm@hartmannursery.com '  (email address, of course)

For more things you never knew before that start with C visit
here at ABC Wednesday, with thanks to Denise, Roger
and all helpers, - and don't forget to visit around!
Posted by Hildred at 8:07 AM 17 comments: