Tonight I picked from the shelf the Collected Poems of Theodore Roethke and it opened at the old familiar page whereon is printed 'The Waking'.

I wake to sleep, and take my waking slow.
I feel my fate in what I cannot fear.
I learn by going where I have to go.

We think by feeling. What is there to know?
I hear my being dance from ear to ear.
I wake to sleep, and take my waking slow.

Of those so close beside me, which are you?
God bless the Ground! I shall walk softly there,
And learn by going where I have to go.

Light takes the Tree; but who can tell us how?
The lowly worm climbs up a winding stair;
I wake to sleep, and take my waking slow.

Great Nature has another thing to do
To you and me, so take the lively air,
And, lovely, learn by going where to go.

This shaking keeps me steady. I should know.
What falls away is always. And is near.
I wake to sleep, and take my waking slow.
I learn by going where I have to go.
Theodore Roethke

I read it again, feeling all its circular mystery, and on an impulse googled the poem, hoping to find some interpretation which would enhance the feeling it engenders in me of birth and fate and death and the importance of experiencing all of life.

I did discover that the form of this poetry is called a 'villanelle' and that it originated about three hundred years ago in France. It is made up of a pair of rhyming lines which, with additions, form a circular and meaningful repetition.

Here is a lovely example of this form.

Musical and sweet, the villanelle,
like light reflected in a gentle rhyme,
moves to the ringing of a silver bell,

its form creating soft and tender spells.
Like the singing of distant silver chimes,
musical and sweet, the villanelle

flows through the heart, and builds a magic spell
from sunlight and from shadows, and, sublime,
moves to the ringing of a silver bell.

It never arcs into the sharp loud yell
of vast pipe organs. Soft its climb.
Musical and sweet, the villanelle,

like a tiny and translucent shell
catching sunlight in the summer time,
moves to the ringing of a silver bell.

Soft and gentle, tender and so frail,
like light pouring through petals of the lime,
musical and sweet, the villanelle
moves to the ringing of a silver bell.

Posted by Hildred at 9:27 PM No comments:

September Rains - a precursor of Autumn


Raining tonight, and the joints are aching somewhat, but still, but still, - here is a lovely combination we saw yesterday - Golden Rod and Rose Hips lining a Cawston road and heralding the arrival of Autumn.. 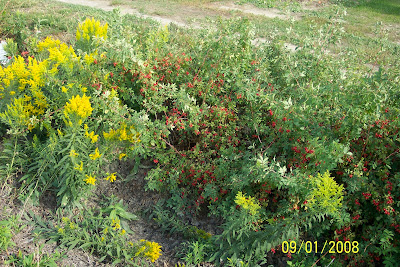 I know it is true that fall is not officially here until the 21st of the month, but I anticipate its beauty right from the first cool evening, - the first scent of apples ripening on the trees, - the first gathering of birds who, having raised their young, are now preparing for the winter season.

Do the ones who migrate have to have a little orientation before they take off? It would seem that way as we watch the flocks of starlings that circle the meadow, rising and falling, gliding and grounding, only to take off again in wonderfully graceful adagios - (in my mind this seems like the right word to describe their movements although technically it might be incorrect).

All the little Finches are finding great delight in the maturing sun flowers, - feeding their tiny
tummies and gathering energy for their southward journey. Some of them migrate, and some of them don't - but it's always a good idea to prepare for the winter storms, and the times when the snow comes.

In the garden the Sedum grows ever more beautiful and the newly planted climbing rose reaches the top of its supporting arbour. 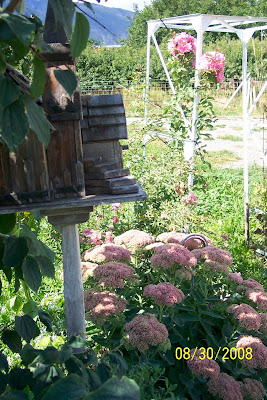 The barn flower plant has had it's yearly hair cut, and is now a much more moderate accent in the middle of the beds. 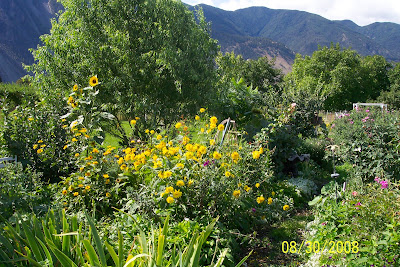 Already the pink chrysanthemums are in bloom, but the rust and gold ones hoard their blossoms for late September and October. A few new flowers on the Heritage Sweet Peas, and each day we gather the brown seed pods, put them in a covered container where they can safely snap and pop without scattering seeds all over the house.

This morning Husband and I worked on preparing the new Peony bed to house those plants that made the journey from the Lost Garden but need to be replanted less deeply in order for them to bloom. I think this is why they are not blooming - we will replant them this fall and see what the spring brings. 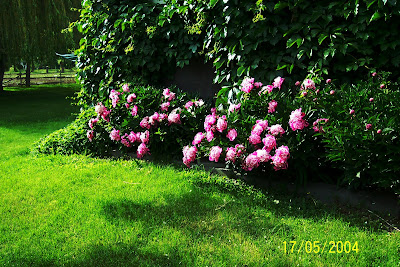 I say it again, - with feeling. Life is good and we are blest.
Posted by Hildred at 7:38 PM No comments: