The phone rings, - a man's pleasant voice gives me his name, tells me his mission, which is gathering the stories of Veterans, and asks me if Charles would be willing to talk to him!

I smile to myself, as I hand the phone to Charles with a short explanation.

When has Charles not been willing to talk and tell stories!!!  It is getting him to write them down that is difficult.

This morning, as we prepared for the gentleman's visit, scrummaging around in drawers, looking for papers and photos, I came across a loose leaf binder upon whose cover I had pasted an article entitled "MAKE TIME TO DO IT NOW" and with the admonishment "take action on your good intentions and live a life without regrets".

I remembered it well, and how it had inspired me, once the children had all left home, to organize my time. my mind, my resources and to seize the day!  "Time plays hard to get, is more precious than jewels and must be used wisely".


I open the cover and find in it just a few pages.

A colourful Mind Map entitled Packing to Move.   This would have been when we moved the accumulation of forty years from the farm to the lovely big house in town, - big enough to accommodate everything we had gathered over the years, alas!  I study the Map and try to remember if I followed it faithfully, - good heavens, was I ever so organized????  I see a lot of 'sorting' circles, and discards, and 'to thrift shop' - it was all such a long time ago, and I was so much younger and so full of energy and enthusiasm....... 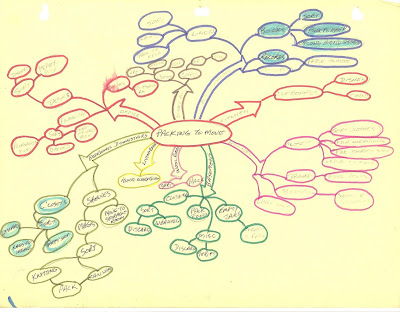 Oh, here is another mind map, - this one's main purpose is cleaning, and it is not nearly as colourful, but just as necessary.

And another one entitled 'Christmas Presents".  I see names on it of people once beloved and now long gone. And here are grandchildren to whom I planned to give baby dolls and toy trucks who are now grown and have their own babies and big trucks, - and missing are some grandchildren who hadn't even made it to the Mind Map Circle.. 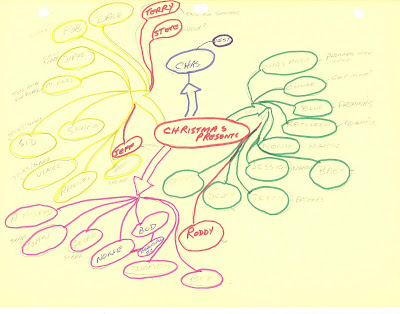 I turn to the next page and find my busy mind had been organizing the boxes of snapshots and putting them in chronological order.  An album for the years from 1945 to 1950  that included our wedding and honeymoon, and after that a new album every five years, with treasure map reminders of what pictures each one should contain.  What a Grand Idea!

Too bad it didn't ever see fruition, but nevertheless to have it all laid out like this is a wonderful record of the years and a wellspring of memories. 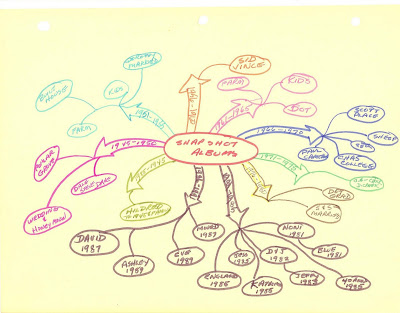 There are a few more Mind Maps dealing with the early months after we moved to town, when my enthusiasm was probably nine miles high, - plans for the garden,  - I see a happy entry for The Trailer, culminating in a smiling sun and the inspired word 'GO'!  Those were the Golden Years of retirement, when Caspar was a pup and we all traveled together, and fished and camped and made memories galore.

The gentleman to whom Charles is telling his stories is coming back next Friday to hear more, but I have to bake that day for the Christmas Sale the next day, so I won't be running into any more precious treasures.

I wish I knew how to turn those mind maps around to landscape mode, but I don't and I'm sure you aren't interested in the details of our moving, or our 25 year old Christmas plans, or what I was planning to do with the boxes and boxes of pictures that never did get into albums but are instead organized in shoe boxes!

(thanks to a tip from a kind reader pictures are now right side up!  Thanks Dimple)

Late in the afternoon I followed the advice of the article and wrote two quick letters that I had procrastinated over, - we took them down to the post office and mailed them, and now I can live a life "without regret'!!!! 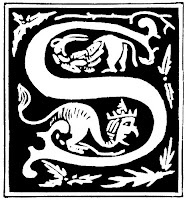 The letter this week is the Sensuous S
S is for the Sunflower that Springs up in the Summer in Such Surprising Spots and Speaks to our Souls of the Spirit of the Sun which So delights us and helps to Sprout the Seeds, So that next Summer we will have even more Sensational Sunflowers!! 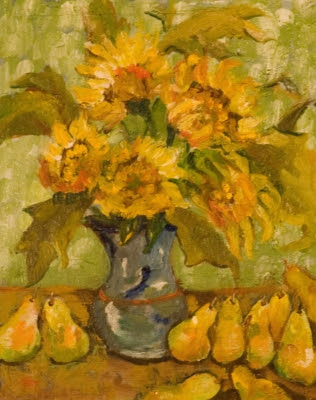 Van Gogh
Sunflowers and Pears
For more interesting takes on the letter S click here and visit ABC Wednesday
with thanks to Mrs. Nesbitt and her Sunny crew of helpers.
Posted by Hildred at 9:36 PM 18 comments: