What am I reading? 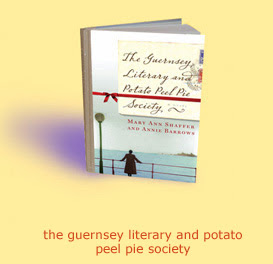 Well, that's what I was reading, - now I am re-reading bits and pieces before I have to return it to the library, and wondering why I waited so many months for my turn to enjoy it. Why didn't I buy it in the first place?

I didn't know it was going to be so charming, and at the same time have such depth to it. It was the title that first attracted me - a lot to be said for titles that capture the imagination. You could probably write a real dud, and if it had a fascinating title people would pine to read it, and at least get through the first few chapters.

Not so with the Guernsey book. It reminds me of an English trifle. I hope you have clicked on the link and read the review, for then you will understand that its light-heartedness is the whipped cream on the top of the trifle, - dig down and you will find an appetizing mix of fruit and cake, a little sweet sherry, some soft custard, and at the very bottom a bittersweet chocolate to represent the dark days of the occupation.

Charles was aware of the extent of the occupation of the Channel Islands, but I had not realized the hardships and oppression they lived with.

Epistolary novels (as this is) can be 'almost voyeuristic from a reader's point of view' - a clandestine reading of another's intimate correspondence. It lends a novel a certain realism when one considers the contents straight from the 'horses' pen. Personally I think this form of novel is very captivating, and carries one along with great interest to read just one more letter, and then just one more reply...and perhaps the next letter, - and on, and on.....

I am reminded of '84 Charing Cross Road' by Helen Hanff, and Alice Walker's 'Color Purple" and C.S. Lewis and 'The Screwtape Letters. Sometimes the epistolary carriage is a diary, as in that of Bridget Jones, and The Adrian Mole Diaries, and most famous of all, the Diary of a Young Girl by Anne Franke.

The Hedgehog is a small, exclusive apartment building in Paris. The book has two heroines, - Madame Renee Michel, the 54 year old concierge of the building, intelligent and introspective behind her guise as a poor peasant, and an occupant, Paloma Josse, a twelve year old French whiz kid who, from her amazingly realistic observation of life so far, has decided it is hardly worth the effort.

I found the reviews of this book to range wildly from slight venom to extravagant praise for its philosophical backdrop. It is said that the French have enfolded this book to their hearts much as Americans accept the writings of Alexander McCall Smith. Of course, with my fondness for Alexander McCall Smith I have a bias towards a more favourable view of the Elegance of the Hedgehog.

Here is what Michael Dirda of the Washington Post has to say...

"This is a very French novel: tender and satirical in its overall tone, yet most absorbing because of its reflections on the nature of beauty and art, the meaning of life and death. Out of context, Madame Michel's pensees may occasionally sound pretentious, just as Paloma might sometimes pass for a Gallic (and female) version of Holden Caulfield. But, for the most part, Barbery makes us believe in these two unbelievable characters."

I like it - but have half of the book yet to read. It still makes bedtime (reading time) something to look forward to.

And when I have finished - what next? Any suggestions....
Posted by Hildred at 6:51 PM No comments:

Some days it isn't worth stopping for the mail, but today we hit the jackpot.

We had ordered a beautiful hand made wooden top for him, from Wishin' on a Star (see my sidebar and do open the site and exclaim over the wonderfully crafted tops for children - and adults.} 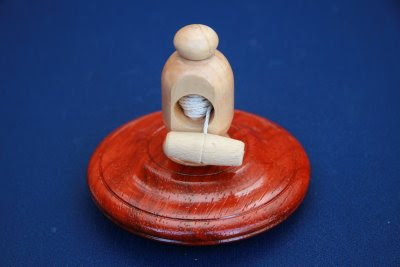 When I arrived home I stopped to put the kettle on, but then quickly opened the box I had carried in. Over tea we unpacked the top, the extra launcher and the nice wooden display block.

I saw my Tea Companion's eyes light up and his fingers begin to twitch!!! In no time he had proclaimed First Dibs and was busily winding the launching cord.....

Look, see how finely balanced it is! It twirls for nigh on to four minutes. Won't the little one be wide eyed! As for the adults, I think it is in the same class of contention as a miniature railroad, prompted by deep childhood memories.

The other two items in the post box bore dreams and promises and turned me right away from March and into the midst of summer.

Gorgeous, fantastic, bewitching flower catalogs that promise more than the heart and reality can bear. The garden is already jam packed with heady roses and lilies, delphinium and peonies, and a dozen other favourites. Where can I find room for a cutting garden? Or for the butterfly blue scabiosa or the pink pampas grass? Or the hardy evergreen Bamboo, - perhaps along the west side of the garage? I am beguiled into dreams, but have been down this garden path before and know that at the end of it lies stark reality! No room, no room - not enough energy - be content! 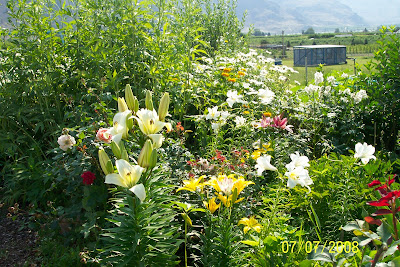 A lovely haul from the post box, - probably tomorrow will bring only bills and flyers, but today was a bonus. And on Sunday we will go and have birthday cake with the darling little boy.
Posted by Hildred at 7:21 PM 1 comment:

Associations between gardening and prayer are pretty obvious, - both done fervently and with a degree of discipline, joy and frustration. And on one's knees!

Jane Mossendew's series "Gardening with God" illustrates the link between the church year and the cycles of nature. I first became aware of these books in 2006, and in Lent of that year I read "Thorn, Fire and Lily" which begins on Ash Wednesday. 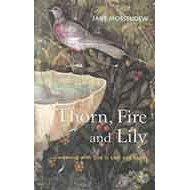 This year, with spring so late here in the Similkameen and Easter middling so, it seems like a hopeful occupation to re-read the Lenten meditations and all the lovely plant information with their Lenten themes.

When I started reading on the Thursday after Ash Wednesday I was delighted to discover that Borage, the Star flower was the plant of the day. 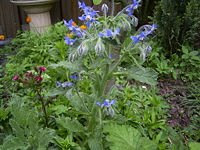 Borage and I have a long time relationship, - sometimes loving, sometimes despairing when the plant becomes too bold and decides to carry on with other garden flowers. It turns up in the most unexpected places, and although it never fails to enhance the scene, sometimes it's just a bit too much.

With its hairy leaves it is not hard to associate it with the "hair shirt" of lenten discipline. Jane Mossendew likes to think that Borage comes from the old Celtic borrach, meaning courage, "and that if this is true it could have been brought to Gaul and thence to Britain in early Christian times".

"Whatever the truth, it has long been known as the 'herb of courage' and ladies would embroider its bright blue flowers on the jerkins of knights about to depart for the Crusades".

What a versatile herb it is. It has a euphoric effect, and has been used to treat depression, - and in that vein it was once the herb of Plimms, before it was replaced by mint.

If it is used in salads it is expected to exhilarate and make the mind glad, - the opinion of Gerard in The Herbalist (1597). And he continues to tells us that Borage is also used for the "comfort of the heart, to drive away sorrow and increase the joy of the minde" A truly excellent plant, despite its wandering ways - the most appealing of blues.

Early summer mornings in the garden, when the flowers of the flax open their lovely blue eyes, and the borage winds amongst the roses and the lilies, it is true blue delight.

Yesterday, the first Sunday in Lent, stachys, or Lamb's Ear was the plant Jane Mossendew chose to remind us of the words of the Prayer of General Confession "we have erred and strayed from Thy ways like lost sheep". Alas, in our Ecumenical church we no longer repeat this old familiar prayer. 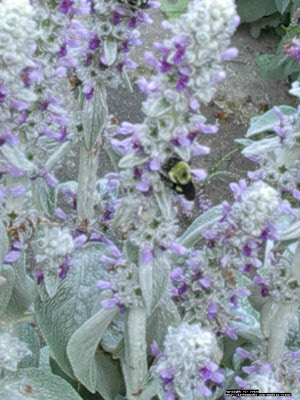 Lamb's Ear is another of those nomads of the garden, - I even find it down along the lane, and it ventures further and further out past the confines of the garden.

I remember almost sixty years ago, when we were so young and in the church, singing All in an April Evening - I saw the sheep with their lambs and I thought on the Lamb of God. Sometimes, in the spring, I play it as an organ prelude.

Today I brought in some 'sticks' from the forsythia, and a few small branches from the flowering almond. The almond is the plant for tomorrow, and as I turn the page I see a note to myself 'plant a flowering almond this spring - will it have ten years to grow?' Well, it has had three, and is doing famously. We rescued it from the Lost Garden that we moved from, - it had been run over by a tractor. Charles and I found a great spot for it, planted it tenderly, and now in the spring it is covered with small pink blooms.

My beloved has gone down to his garden, to the beds of spices, to pasture his flock in the gardens, and to gather lilies.
Song of Solomon 6:2

Posted by Hildred at 7:59 PM No comments: