A Happy New Year Re-run from December 31st, 2007 - the thoughts are still the same, - the wishes for happiness in the New Year still as warm as ever.

Where the night is starry, bright and clear do enjoy the blue moon, the second full moon of December. Hidden from us, alas, by low clouds and a snowy sky. 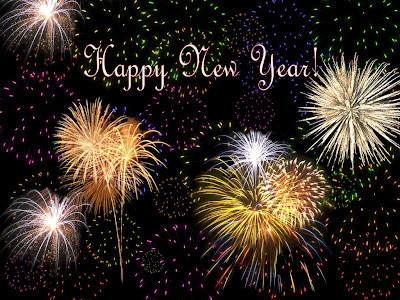 I am starting to write this post early, as I'm sure I must have something profound to say about the passage of time, even if it is just a matter of discarding the old and pinning up a new calendar, full of hope and promise and good intentions. A little mundane catalyst.....but one that springs eternally and with great hope.....

Profound thoughts do not always come easily, - they float around like vaporous clouds for some time before taking shape and form. And sometimes the end result is not as profound as one would wish.

Memories keep confounding any attempts at serious speculation about 'how times change', 'where are we headed', 'what is truly important as we skid along, day by day' and 'who is in charge of this wild ride'?

New Year's Eve has always been a special time in our lives. Christmas was for the children, but New Year's Eve was for parents, partying and compatriots. With six children we had to make a stand somewhere and strike out on our own.......

When we first came to this valley almost sixty years ago we settled on a DVA project along with forty or fifty other veterans of World War Two. We were all poor, - the fellows had spent the early years of their young manhood in Europe, and by today's standards the compensation was very sparse indeed. But we were rich in friendships and community, and our memories of those years are sweet (well, sometimes bitter sweet - it was an adventure, but also a struggle).

We partied in half built homes, - we organized dances (the old fashioned kind) - we went on scavenger hunts and played bridge at every opportunity. And New Year's Eve was important to us in many ways, - a relaxation, a time of hope that next year would bring good crops and markets (the orchardist's perennial optimism).... Sometimes New Year's Eve extended well into New Year's Day - always it was an expression of friendship and good fun.

In later years New Year's Eve was quieter. A game of bridge, some reminiscing, a drink or two, always crab sandwiches, - and always the same fondness for the dear friends we celebrated with. Time has a way of changing the things we would like to cling to. Death intervenes, and now we have come full circle, and New Year's Eve is usually spent with our children and grandchildren.

Precious moments, but still we are overcome with nostalgia for old friends and Auld Lang Syne. Midnight finds us tender and maybe teary-eyed.

So where are the profound thoughts? Awash in a sea of sentimentality I reach for the words to express the direction the world seems to be taking.

Two poems come to mind... the first one written by Minnie Louise Harkins and quoted by George Sixth in his 1939 Christmas address to a world so recently embroiled in war.

Words that brought hope and kindled feelings of faith and trust and courage in those dreadful times, but I wonder if today they seem merely 'quaint' (at best) to a majority of society.

The other poem I puzzle over is 'Invictus" by William Henley. "Invictus" I have read, is "...the culmination of a long and torturous struggle for life and truly as an epilogue to all the poems Henley wrote". His life was a struggle, - economically in his younger years and as a result of tuberculosis in his youth he lost one of his legs, and suffered immense pain all during his life. In spite of this he contributed greatly to the lives of young writers in his role as an editor, but I find so many of his poems melancholy and despairing.

Therefore, "Invictus" seems to be a triumph over all the vicissitudes that he bore, and it has been an inspiration to many who suffer hardship. It inspires a stiffening of the spine, a determination to maintain integrity, and to cope with whatever life sends us.

Out of the night that covers me,
Black as the Pit from pole to pole,
I thank whatever gods may be
For my unconquerable soul.

In the fell clutch of circumstance
I have not winced nor cried aloud.
Under the bludgeonings of chance
My head is bloody, but unbowed.

Beyond this place of wrath and tears
Looms but the Horror of the shade,
And yet the menace of the years
Finds, and shall find me, unafraid.

It matters not how strait the gate,
How charged with punishments the scroll,
I am the master of my fate:
I am the captain of my soul.

So why does it puzzle me, when it is clearly an admirable poem?

It is the last two lines.... I know that Henley meant them to express his courage in overcoming adversity and fate, and that in this context they have helped many to deal with despair and seemingly hopeless hardship.

And yet, and yet - they almost seem like a rallying cry for those Darwinian scientists who place their belief in genes and neurons and a natural progression from the slime of the ocean to the art, the music, the culture, the search for knowledge, the altruism and the faith that has, alas, faltered in the last four hundred years. And while they nurture their belief it seems to one who was brought up in a more innocent and moral age that the world is careening on a hand-cart to hell.

It is a paradox, indeed, that Christianity allows mankind the right of self-will and conscience, whereas the modern scientific outlook chains one to a theory of evolution which controls our actions, our thoughts, our mind and our very soul (if they but admitted that the soul exists...)

Then, I have to ask myself, how can those who accept their version of evolution as gene-controlled be "master of their fate" or "Captains of a soul" that they deny, - and I end up more perplexed than ever....

But there, after all these memories and musings I finally wish you all a blessed New Year - keep the faith, whatever it may mean to you, and strive for goodness.......

Another sweeter poem by William Henley...but still with a hint of the inevitable............

And with the discovery of the meaning of this word I have finally come across the origin of Blonde Jokes.

Xanthocomic means yellow hair, and there is a whole cluster of words with the prefix "Xanth"

Xanthippe refers to an ill-tempered woman (with yellow hair????)

Xanthochroic means yellow skinned, and if your teeth, alas, have a yellowish cast, they are said to be xanthodont.

It is Xanthophyll which causes the yellow colour of autumn leaves, and if a plant has yellow seeds it is then Xanthospermous.

Just recently I was told about an Xanthocomic woman who went into the Post Office, asking to buy fifty Christmas stamps.

"What denominations would you like?" asked the clerk in the PO

"Good gracious" exclaimed the Xanthocomic woman, "has it come to that!!!!" And tossing her Xanthic hair she airily said -

"Then I'll have 22 Roman Catholic

My apologies to all blondes, - I used to be one myself!

X is a difficult letter, - skip along to ABC Wednesday and see what others have discovered about X.
Posted by Hildred at 8:59 PM 14 comments: