and allowed David to take his picture, and David in turn has
allowed me to show you this wonderful colourful fellow 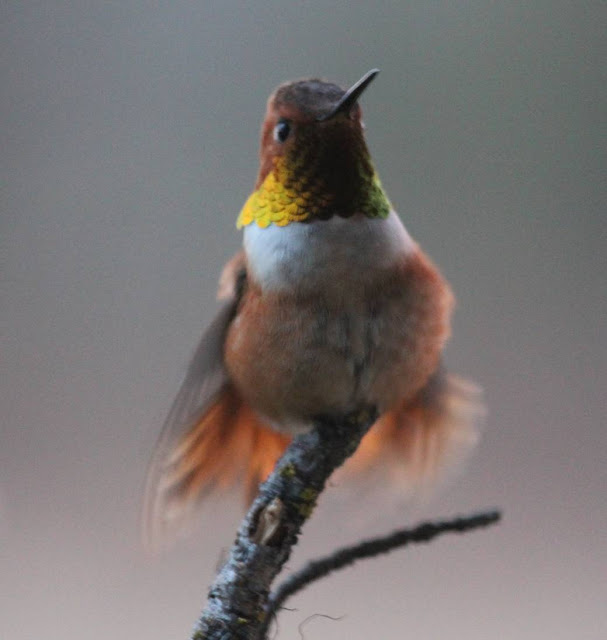 so bright eyed and golden throated, - his pale pastel feathery body
so indicative of  a glorious spring

He is only one of many hundreds who visit the meadow folk.

Here is the breakfast bar at 4:30 a.m. a few mornings ago

and I have seen photos of over two dozen customers
on David and Nicola's blog at the Homestone
http://thehomestone.blogspot.ca/

Their latest posting is of wildflowers in the Chilcotin

My work is the world
.  Here the sunflowers, there the hummingbird -
equal seekers of sweetness.
Here the quickening yeast; there the blue plums..."

The letter we are considering this week is T 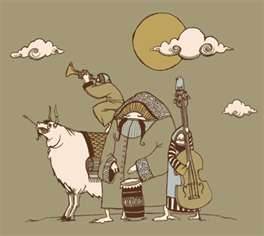 one of a class of medieval lyric poets

who frequented parts of Southern France from about the 11th to the 13th centuries.

They wrote songs and poems of a complex metrical form

chiefly about love and courtliness. 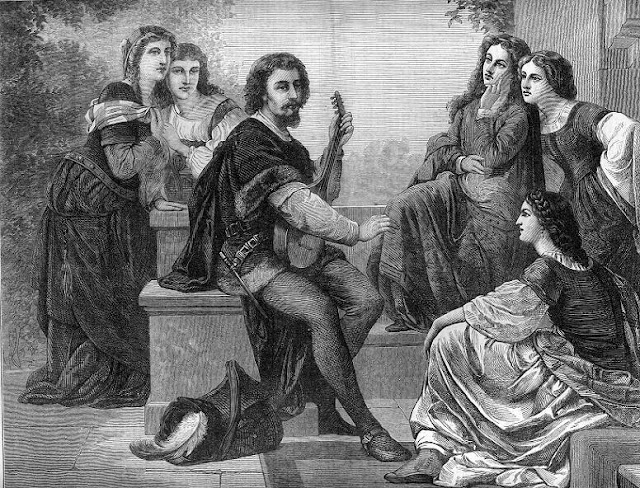 They were very popular with the ladies! 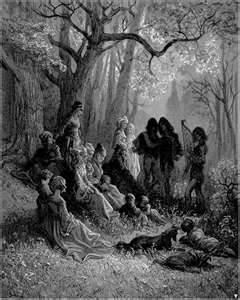 and led a rather transient life.

For more intriguing Ts trip on over to ABC Wednesday, here,
with thanks to Mrs. Nesbitt.
Posted by Hildred at 8:41 PM 11 comments:


I am sweeping the bits of lilac, the detritus from the beautiful creamy mountain ash blossoms, something else that resembles a little brown caterpillar, but is in truth a bit of vegetation that having done its fertility job is now cast off to lie on the paved roadway leading into the garage.

Charles comes wheeling down the lane on his big blue electric cart, having been over town to get his hair  cut and  to chat to all and sundry on the main street.  I have heard stories about  the style and speed with which he 'wheels' around town, but now, in his hand, he bears a clutch of beautiful orange poppies.

He reminds me of the children, coming down off the hill to the kitchen door, bouquets of buttercups and daisies in their little fists, and the same sweet smile on their little faces!!

He found these gorgeous plants, laden with bloom and buds, along the lane outside the
neighbour's back fence. 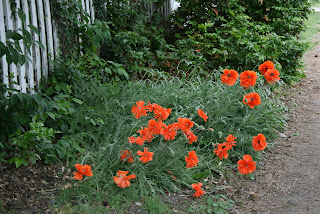 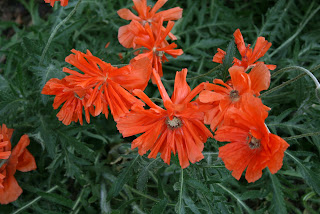 The other a more traditional poppy shape, layer upon layer of  delicate crumpled leaves 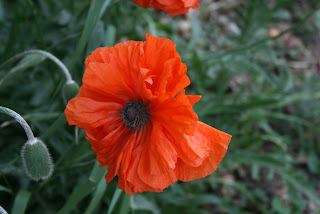 We put them in a little vase in the middle of the table, but they soon began to droop, and so I laid them water-lily fashion on their backs, in a wide bowl.  They were definitely out-door poppies, yearning for the breezes that wafted through their cut leaf greenery and cooled their hot orange petals

Just now, as I write about them, I am reminded of the long streamers that floated through the vaults of the Washington National Episcopalian Cathedral  today as I watched on my PC the Pentecost procession approach the altar, the flame coloured streamers attached to the ends of a thirty (?) foot pole,
circling above  the
line of choir and priests and intercessors and out over the congregation.
Tongues of flame and rushing winds!
Such marvelous theatre to celebrate the Day of Pentecost.

Later I came across this poem by Sandra McPherson, a modern Amercan poet...

Orange is the single-hearted color.  I remember
How I found them in a vein beside the railroad,
A bumble bee fumbling for a foothold
While the poppies petals flagged beneath his boot.

I brought three poppies home and two buds atill sheathed.
I amputated them above the root.  They lived on artlessly
Beside the window for a while, blazing orange, bearing me
No malice.  Each four fanned surface opened

to the light.  They were bright as any orange grove,
I watched them day and night stretch open and tuck shut
With no roots to grip, like laboratory frogs' legs twitching
or like red beheaded hens still hopping on sheer nerves.

On the third afternoon one bud tore off its green glove
And burst out brazen as Baby New Year.
Two other poppies dropped their petals, leaving four
scribbly yellow streamers on a purple brimmed and green

conical cadaver like a New Year's hat.
I'd meant to celebrate with them, but they seemed
So suddenly tired, these aging ladies in crocheted
Shawl leaves.  They'd once been golden as the streets

Of heaven, now they were as hollow,
They couldn't pull together for a last good-bye.
I had outlived them and had only their letters to read,
Fallen around the vase, saying they were sorry.
Posted by Hildred at 8:02 PM 4 comments: