I look at the blank page and I am perfectly devoid of any inspiration.  Perhaps if I was to use the Omm writer that I recently downloaded I would be suffused with ideas ........  Oh, it has very nice fonts, and  meditative music  along with the clicking of keys, like an old fashioned typewriter.  It reminds me of when I worked for the City and typed 12 copies of minutes for the Town Planning Commission  on onion skin! This was before we were married,  when Charles was still in England with the RAF when he wasn't flying over Europe and I was both dexterous and young enough to cope with twelve sheets of onion skin and an old manual Remington typewriter.... when I try to copy and paste I just get the same old humdrum font here on Blogger.  Oh well...

Yesterday afternoon the clouds decided just to hover, rather than spill their deluge on all and sundry, and late in the day I was able to cut the hankie lawn at the back, and what passes for a lawn at the front of the house.  Such a sad little bit of grass, but it has the lovely willow at one end, and a newly painted table and bench where I think about spending a quiet afternoon with a book, in the shade.... 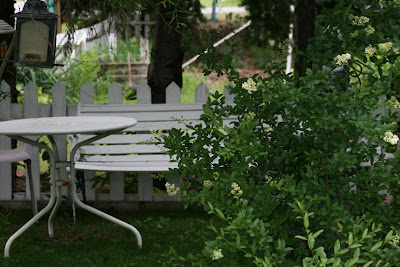 Charles is talking about going outside to finish a little ramp project he has been working on, and I peer out the window to see if the rain has perhaps stopped for a wee while, - just a smidgin would be nice.  I see  that despite the dampness the climbing roses are in full bloom, (though a little ragged)  and a few pink poppies are hiding amongst them, shielding themselves from the stormy weather.  I go out to take pictures, - the sun comes out momentarily, but it is still raining.  I look for a rainbow - in vain.  Nobody is making any promises today, except the weatherman who says that tomorrow will be sunny.  Can he be trusted? 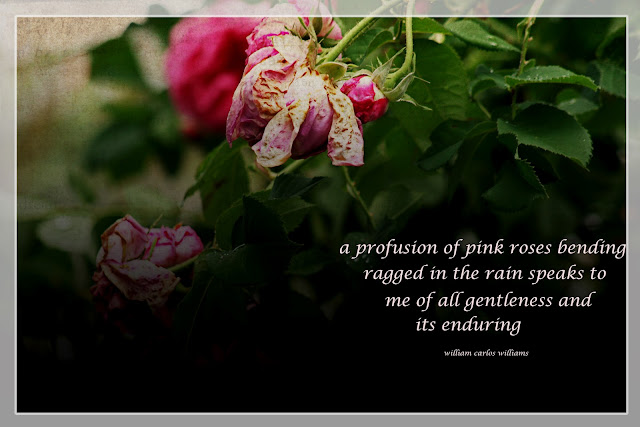 The clematis had fallen over in the blustery rain,  so I picked them up and put them in their rightful places around the trellis 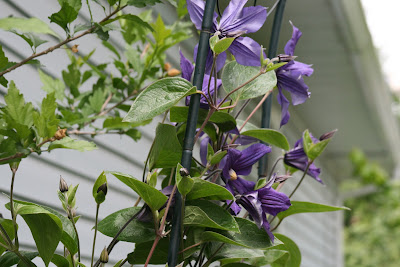 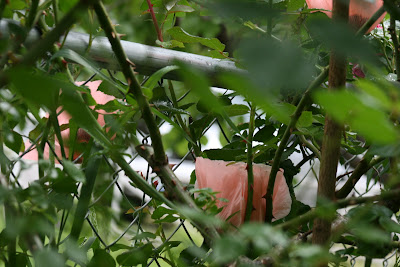 Delphinium growing, straight and true and ready to bloom amongst the roses. 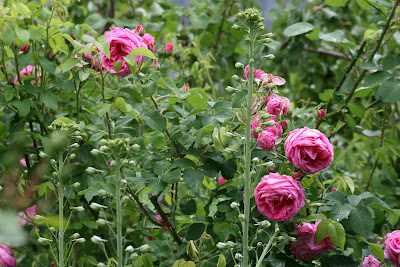 Last evening we had a wonderful visit from Ashley and Ryan.  She is our second youngest granddaughter and came seeking photographs from early days when the house had a room just for grandchildren, with toys and books and they were all great company for the Grandparents and we all went camping together and had lovely times.

I promised to copy and print the ones she chose and I think that would be a good project for the afternoon; to gather all those memories together and to remember what a joyful life it has been and how lucky we are.

a smile guarantee even if it's been raining for a week...


Yesterday we went over the pass to Penticton.  It rained all the way,
and the clouds hugged the mountain tops. 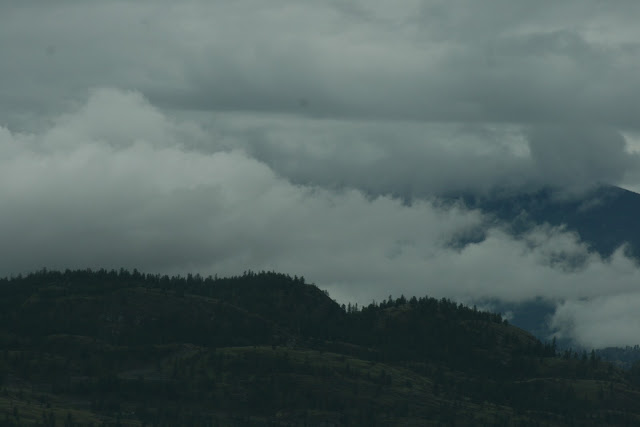 But the hills were green! 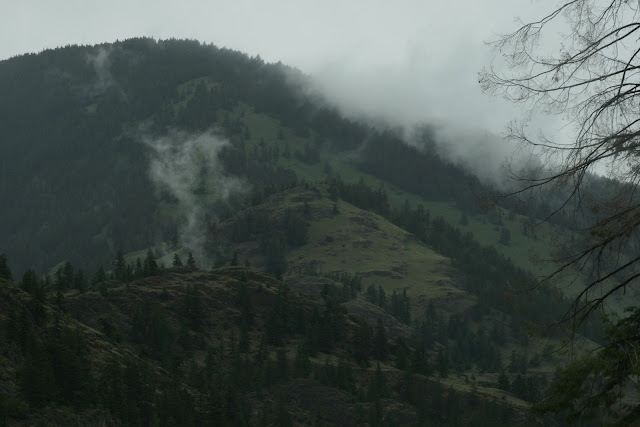 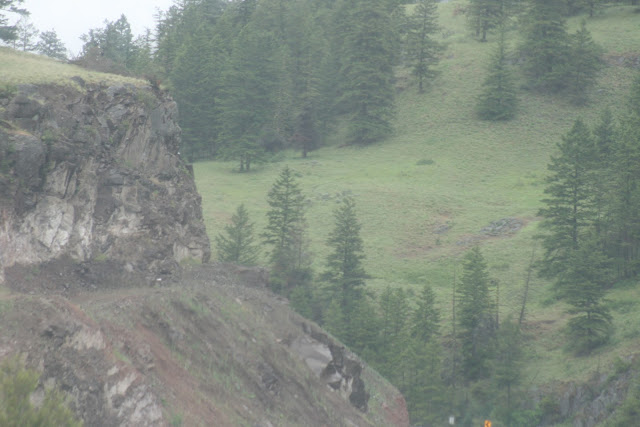 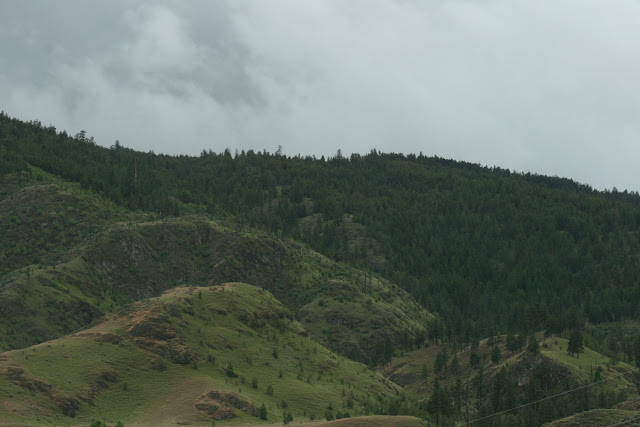 and the reflection of the bright foliage around the waters of the lake at the top of the pass
suggested  it be designated Green, rather than Yellow Lake 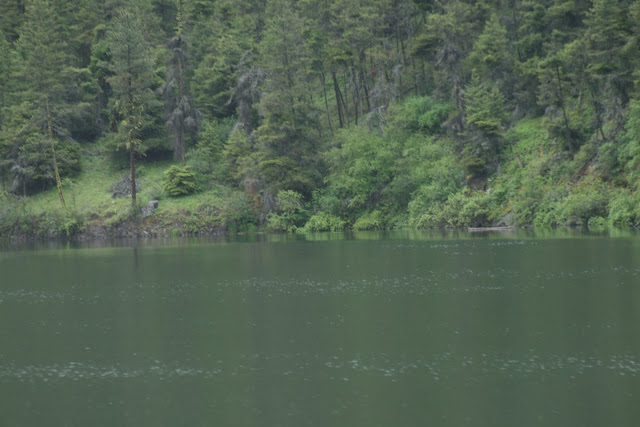 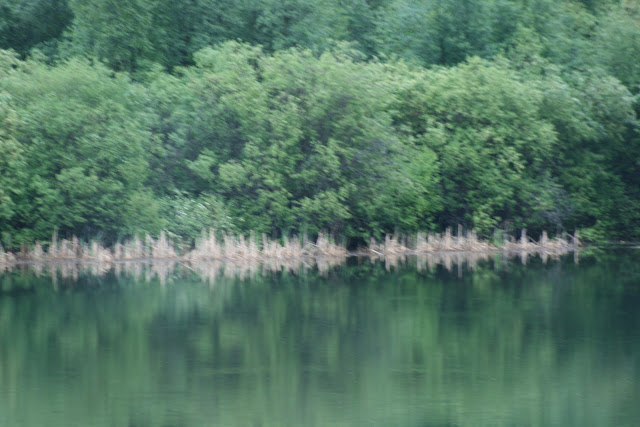 Soon summer will turn the hills sere and dry and so we hold these damp days precious, and are thankful for the protection the rain gives when the hills are under threat of wild fires.

We had a small fire on Saturday, running along the bottom of the mountain that overlooks our back garden. 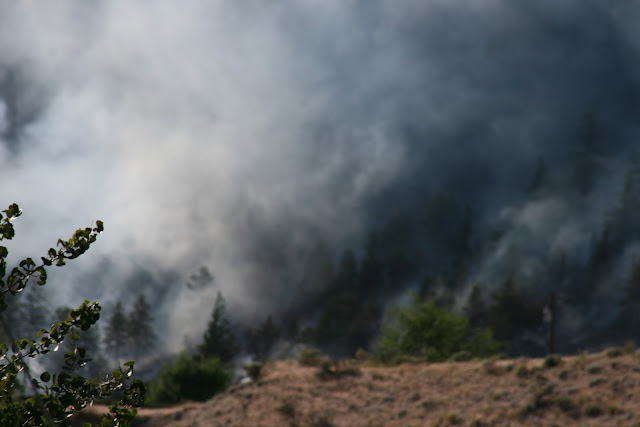 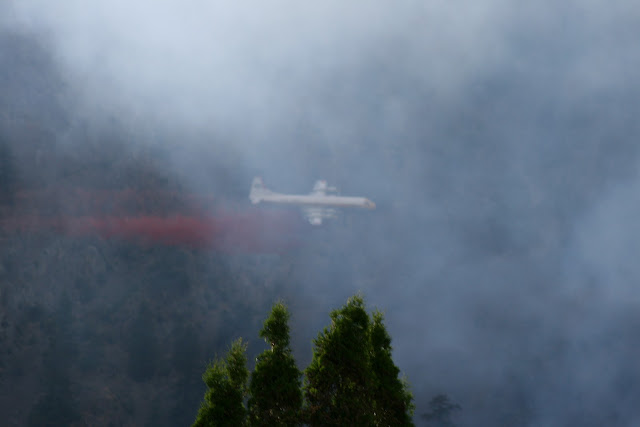 The big bombers with fire retardant and helicopters with buckets of water scooped up from the river came and provided a great show for all the village residents, and in the process put out the fire.

It is still raining today, and nobody saw Venus in her journey across the Sun, alas.
Posted by Hildred at 11:29 AM 4 comments:

The letter this week is the less than ubiquitous U

The U is a little sparse on the ground, but I did find a classic one that stands for Utrillo 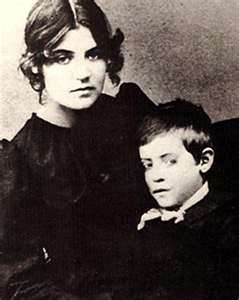 Often drunk, struggling with alcoholism and mental illness, ignored by the art world for many years, but now known as an admired post-impressionist painter along with artists such as Monet and Renoir.  A recent auction of Utrillo's paintings raised over $7 million dollars.... 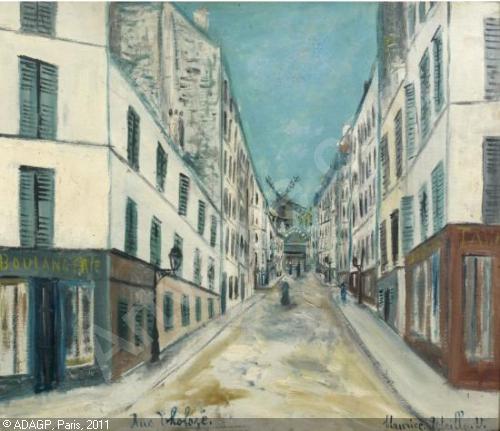 and here a more romanticized painting of the streets of Paris,

full of light and softer lines 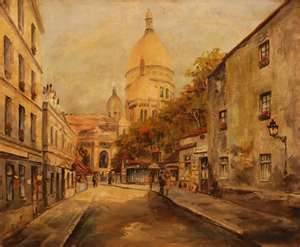 and lose myself  along the street, among the shops and flowered windowsills.

Next week I will post for V and tell the story of
Utrillo's mother, Suzanne Valadron.

In the meantime do go here to see what other U's are at ABC Wednesday.
Posted by Hildred at 9:45 PM 12 comments: 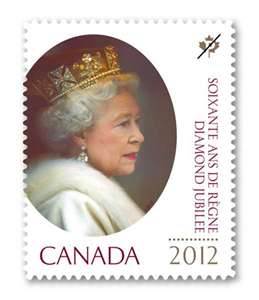 Although my Canadian Loyalist ancestry begins with a Palatine gun maker who fled to Holland and eventually  found refuge in New York State through the good graces of Queen Anne of England, somehow I have always been closer to my mother's English heritage, and I feel a great empathy for both the island and its people.

This afternoon Charles and I watched with delight the Royal Procession down the Thames, the flags, the crowds of people, the happy faces, and we were once again impressed by the faithfulness with which Elizabeth has fulfilled her vow to 'serve' the people of England and the Commonwealth.  She and Philip are of our generation, and have seen the great changes in society's mores that have sometimes brought turmoil to our lives, but she soldiers on, adapting and changing with the times, keeping the monarchy relevant and steady.

Listening to Prince Andrew speak about the allotment of royal duties among the family, and the way that they spread themselves amongst the people, sponsoring this charity, being benefactor of that organization, engagements they keep (was it 4000 a year or 8000?) I was struck by how very hard they work.  He spoke about  losses in the family, and was asked how the particular duties that these family members have attended to are now covered, and he said with a wry smile, well, we just get the card tables out and shuffle them around, and I thought 'yes, of course, - what a homey way to speak of it, although I imagine reality would paint a somewhat different picture.

Well, it was all very exciting, and the Queen looked so happy, and Philip as distinguished as ever and so protective of her. 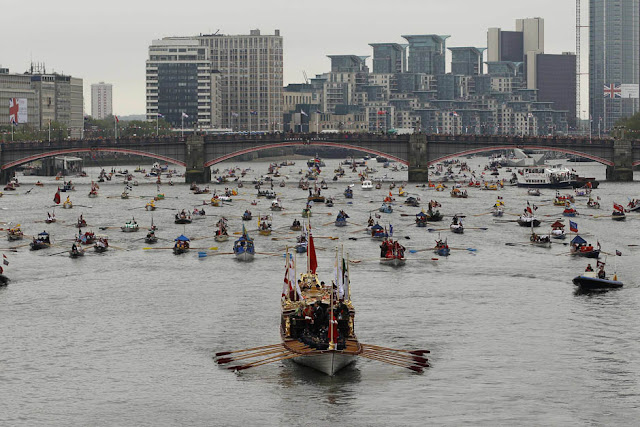 Here is the Gloriana, the Royal Barge 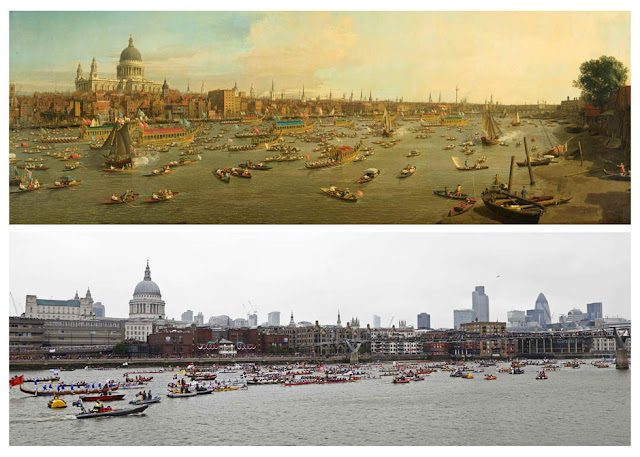 Here is the Queen, with a lovely smile, and one of her subjects looking equally happy! 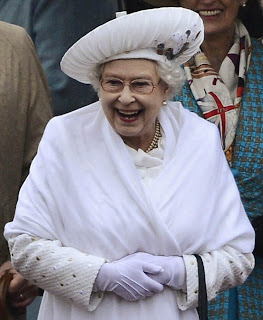 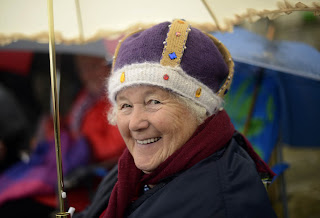 photos from The National Post
I will look forward to tomorrow's Diamond Jubilee Concert......