After being plunged into a day of retrospect inspired by reading a list of literature that had influenced the life of The Weaver of Grass I decided that I too would accept the invitation of The Crafty Green Poet to record the books that have being meaningful in my life.

1. The first book I can recall was about King Arthur, probably the junior book "King Arthur and the Knights of the Round Table", and I would imagine I received this as a birthday gift when I was about six. I remember being told that I would grow into it!

2. The Book of Common Prayer - the prayers and passages which were part of my childhood re-echo in my mind more than you might imagine, having been away from a purely Anglican Church for almost forty years.

3. Peggy Parsons, a Hampton Freshman by Annabel Sharp (still available) - it made me dream of going away to College. But I didn't until all the children were in their teens..

4. The love poems of Sara Teasdale were dear to me when Charles was a Lancaster Pilot flying out of the Midlands in England. "It is enough of honour for one lifetime...."

5. When I was immersed in motherhood Anne Lindbergh's "Gift From the Sea" opened many doors for me.

6. And when we were first farming Malabar Farm by Louis Bromfield was both practical and romantic.

7. I came fairly early to Will and Ariel Durant. I have passed on their wonderful books on Civilization, but keep a copy of "The Story of Philosophy" and "The Lessons of History".

9. Thomas Firbank's "I bought a Mountain" - another gift from my SIL, stirs up great memories of our own sheep experiences. We went on to read his other books as well, - with true enjoyment.

10. At one period of my life John Fowles brought a great deal of turmoil into my life with his philosophy and his comments on the human situation. I can't remember now if I read him before I read..

11. "Hymn of the Universe" by Teilhard de Chardin, - I only know they still sit together on my bedside shelves, - although somewhat separated by a few books that don't cause such consternation with their different philosophies. I still haven't quit asking questions.

14. "The Immense Journey" by Loren Eiseley - begging to be re-read for his marvelous insight into nature.

15. For humour and wisdom, Peg Bracken's "A window over the sink", and

16. The Journals of Bartholomew Bandy, by Donald Jack.

17. Every last one of Susan Howatch's series on the Clergy of the Church of England. As well as

19. The poetry of Gerard Manly Hopkins, - especially "The Windhover" and "God's Grandeur"

21. Alexander McCall Smith - all his books bring me delight - his writings are gentle and civilized!


22. Robert Louis Stevenson - "A Child's Garden of Verse" - for all the tender memories it brings to mind.

23. "The Songs of Solomon" for their beautiful lyricism.

24. "A Garden for all Seasons" - prosaically printed by The Readers' Digest.

25. "Journal of Solitude" by May Sarton. "Solitude," she writes, "like a long love, deepens with time, and I trust will not fail me as my own powers of creation diminish. For growing into solitude is one way of growing to the end." - back cover, The House by the Sea

Charles has been gently remonstrating with me about the fullness of my life's agenda, and as I leafed through the Aristos I found underline on page 41,(probably forty years ago) "The anxiety of time. Have I the time to do what I want?"

The more things change the more they remain the same - who'd a thought it, - I wonder what next!!

Thank you Weaver, (and the Crafty Green Poet), for the memories....
Posted by Hildred at 7:30 PM 2 comments: 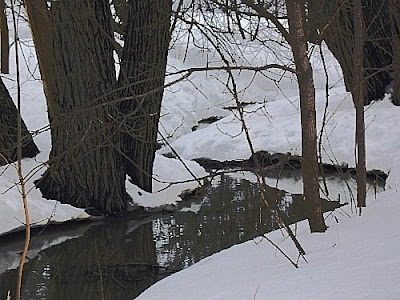 SPRING - lost on the pathway to Summer....

The redwing blackbirds are awaiting, and one lone robin has been seen searching for swelling buds and green grass. 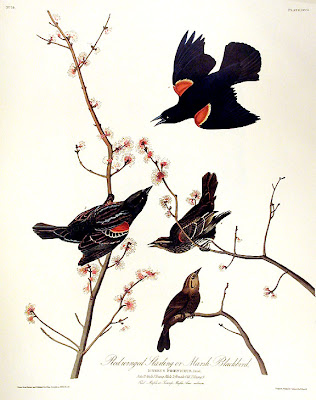 Pussy Willow and forsythia brighten up the indoors, and outside the sky is blue and the sun shines brilliantly. But the North Wind is bitter, - so bitter.... 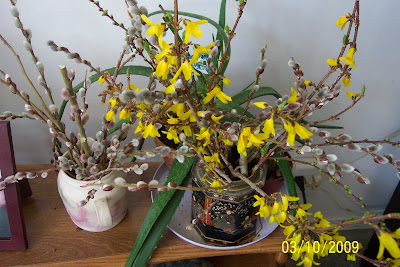 Has she abandoned us for some wayward pleasure?

I have it on good authority.... 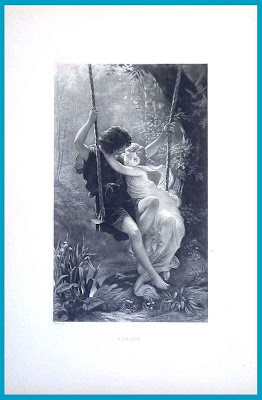 While she dallies and flirts the earth waits patiently, but I'm here to tell you, there is wailing and gnashing of teeth amongst gardeners......
Posted by Hildred at 8:20 PM 3 comments: