Look at the stars! look, look up at the skies!

O look at all the fire-folk sitting in the air!

the bright boroughs, the circle-citadels there


I cannot truly say what it is that makes Wales, and the Welsh, so appealing to me. Is it the countryside, as I imagine it. Much like our own but wilder and with more craggy mountains and hills. Or is it the language with its lilt and strange cadences? Or the music, - so magnificent and stirring, sung by those marvelous Welsh voices.

Or is it the Romance of Dragons and Merlin and ancient tales of love and heroism. Before I ever knew of Myfanwy and her reluctance to be satisfied I had a friend when I was in Grade One also named Myfanwy.

Her name appealed to me on two levels, - the Romantic and the Practical. As a name Myfanwy was equally as unusual as Hildred, and so it was not just me who stood out amongst all the Annies and the Alices and the Joans and Noras.

Some of my evenings I spend visiting various blogs that appeal to me because of their creative and descriptive writing. "The Welsh Hills Again" is one of my favourites. Its meaningful writing carries me away into a different world, one with a culture so ancient compared to the valley in which we live, where we are only two or three generations away from the first white pioneers. And I am impressed by the expression of "awareness"....not only of surroundings, but of life itself.

In the last few weeks I have had a selection of poems and prose of Gerard Manley Hopkins sitting on my desk, and I marvel at the awareness and the sensuous expression of his way of seeing.

Although he was not Welsh, he did spend time in North Wales when he was reading Theology, and he used his knowledge of classical Welsh poetry to "good account", both in his poetry and his prose.

His description of a spring sky...."but such a lovely damasking in the sky as today I never felt before. The blue was charged with simple instress, the higher, zenith sky earnest and frowning, lower more light and sweet. High up again, breathing through woolly coats of cloud or on the quains and branches of the flying pieces it was the true exchange of crimson, nearer the earth/ against the sun/ it was turquoise, and in the opposite south-western bay below the sun it was like clear oil but just as full of colour, shaken over with slanted flashing 'travellers', all in flight, stepping one behind the other, their edges tossed with bright ravelling, as if white napkins were thrown up in the sun but not quite at the same moment so that they were all in a scale down the air falling one after the other to the ground"...

Glory be to God for dappled things --

For skies of couple-colour as a brinded cow;

For rose-moles all in stipple upon trout that swim;

Whatever is fickle, frecklèd, (who knows how?)

"on left, brow of the near hill glistening with very bright newly turned sods and a scarf of vivid green slanting away beyond the skyline..."

and on and on, - one brilliantly satisfying sentence after another.

Posted by Hildred at 8:34 PM No comments: 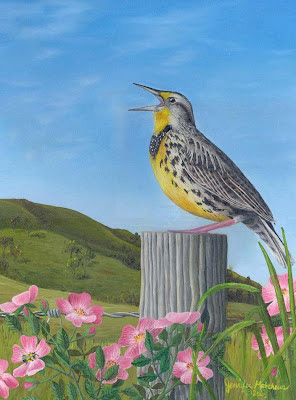 The Return of the Meadowlark

As reported by Youngest Daughter, who lives down the lane, across the road and on the bank overlooking a riverside ranch whose meadows accommodate the first larks to come calling in these parts each spring.

Arrival date was the same as last year, - good scheduling.....

Husband and I worked all morning in the garden, listening carefully for the meadowlark's distinctive call, but all we heard were robins chirping, red wing blackbirds trilling, and the occasional quail complaining about the loss of their suite in the Pruning Block Apartments.

Firing of the prunings was an immediate concern, before it became a nesting spot for the quail, and luckily the countryside has abundant cover for little ones to grow up in.

On the farm the meadowlarks arrived with the first Yellow Bells and Buttercups, but here, closer to town, they are not as "at home" as they were on the benchlands and amongst the sage brush.

It was always exciting to be the one who heard the first meadowlark, and to be able to announce the arrival of Spring for Sure.

It was not reported whether the birds wore something green to honour the day.....
Posted by Hildred at 4:48 PM 2 comments:

Labels: March 17, meadowlark
Newer Posts Older Posts Home
Subscribe to: Posts (Atom)
"Thou knowest not what a day may bring forth." —Proverbs