Where are they now??? 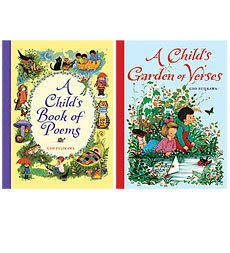 Books that once we cherished - that sat upon our bookshelves, or under some eager reader's bed. The poems that children snuggled up to hear Daddy read, - or Mummy - or anyone they could capture who was fair game to read aloud. And before they could read, they learned to rhyme along, and woe betide the reader who skipped the smallest word, or tried to finish a verse prematurely...

Where are they now, - these books that were passed along to grandchildren, and now are delicious repasts for the great grands. Do any of the grown up children recognize them?

I search the online book stores and find they can be bought for $192.50 or else they are no longer available..........they are probably terribly out of date for today's parents, - if not for today's children. But I, at least, have fond memories of Robert Louis Stevenson's Child's Garden of Verses, and reading to small boys playing with cars and trucks on the Land of Counterpane, When I was sick and lay a-bed / I had two pillows at my head / and all my toys beside me lay / to keep me company all the day. 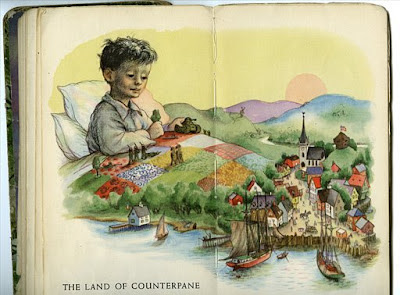 And My Shadow, The Swing, The Wind, - all wonderful examples of Robert Louis Stevenson's affinity with children.


And then there were the marvelous poems of Mildred Pews Merryman,. Do you remember Ho - Pirate Don Durk of Dowdee- rollicking language that paints such exciting pictures. What child wouldn't dream of being a romantic pirate after listening to all that lovely rhythmic alliteration.

Ho, for the Pirate Don Durk of Dowdee!
He was as wicked as wicked could be,
But oh, he was perfectly gorgeous to see!

The Pirate Don Durk of Dowdee.

His conscience, of course, was as black as a bat,
But he had a floppety plume on his hat
And when he went walking it jiggled - like that!
The plume of the Pirate Dowdee.

His coat it was handsome and cut with a slash,
And often as ever he twirled his mustache
Deep down in the ocean the mermaids went splash,
Because of Don Durk of Dowdee.

Moreover, Dowdee had a purple tattoo,
And struck in his belt where he buckled it through
Were a dagger, a dirk, and a squizzamaroo,
For fierce was the Pirate Dowdee.

So feaful he was he would shoot at a puff,
And always at sea when the weather grew rough
He drank from a bottle and wrote on his cuff,
Did Pirate Don Durk of Dowdee.

Oh, he had a cutlass that swung at his thigh
And he had a parrot called Pepperkin Pye,
And a zigzaggy scar at the end of his eye
Had Pirate Don Durk of Dowdee.

He kept in a cavern, this buccaneer bold,
A curious chest that was covered with mould,
And all of his pockets were jingly with gold!
Oh jing! went the gold of Dowdee.

His consience, of course it was crook'd like a squash,
But both of his boots made a slickery slosh,
And he went throught the world with a wonderful swash,
Did Pirate Don Durk of Dowdee.

It's true he was wicked as wicked could be,
His sins they outnumbered a hundred and three,
But oh, he was perfectly gorgeous to see,
The Pirate Don Durk of Dowdee. 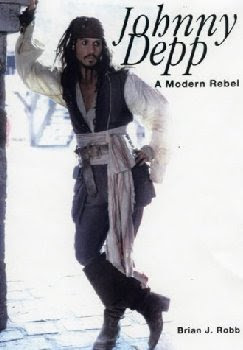 It makes even a Great Grandma wide-eyed...

And The Moon a beautifully evocative lullaby poem.

Zoon, zoon, cuddle and croon--
Over the crinkling sea,
The moon man flings him a silvered net
Fashioned of moonbeams three.

And some folk say when the net lies long
And the midnight hour is ripe;
The moon man fishes for some old song
That fell from a sailor's pipe.

And some folk say that he fishes the bars
Down where the dead ships lie,
Looking for lost little baby stars
That slid from the slippery sky

Zoon, zoon, net of the moon
Rides on the wrinkling sea;
Bright is the fret and shining wet,
Fashioned of moonbeams three.

And some folk say when the great net gleams
And the waves are dusky blue,
The moon man fishes for two little dreams
He lost when the world was new.

And some folk say in the late night hours,
While the long fin-shadows slide,
The moon man fishes for cold sea flowers
Under the tumbling tide.

Zoon, zoon, cuddle and croon--
Over the crinkling sea,
The moon man flings him a silvered net
Fashioned of moonbeams three.

And some folk say that he follows the flecks
Down where the last light flows,
Fishing for two round gold-rimmed "specs"
That blew from his button-like nose.

And some folk say while the salt sea foams
And the silver net lines snare,
The moon man fishes for carven combs
That float from the mermaids' hair.

On the road to Raffydiddle
Sits a fiddler with a fiddle,
And there beneath the melting of the moon,
Each night he puts his chin
To his cheery violin
And plucks him out a frisky feather tune.

And when as they go down
To Raffydiddle town
The people hear him playing in the dusk,
Beside the crooked stile
They pause a little while
To dance beneath the moon the moneymusk.
...............


But those who come at dawn
Will find the fiddler gone
And all the music melted into musk.

Every Raffydiddle tune
Will be shut up in the moon
And none who seek will find his dark abode,
But where the music thinned
A creepy little wind
Will ripple down the Raffydiddle road.

Will you come and read it to me, - please, please, pulleease.... 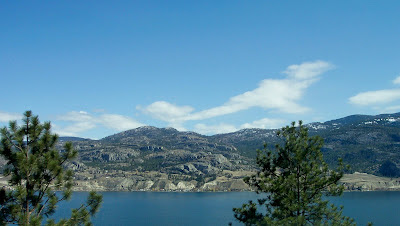 Finally - a day of utter delight. Weatherwise, that is.

Not too bad in other respects as well. Husband went singing in the morning, and when he came home just before noon we had a peanut butter and honey sandwich (a treat for him) and then journeyed to Penticton to do some errands and buy, amongst other things, some ink for the voracious printer that is a real glutton for cyan and magenta.

A window snap of the hills on the East Side of Skaha Lake, taken as we made it down the last hill into the city. The sun shone on the rocky outcroppings, and brought them into strong relief. I spied forsythia in bloom and wonderfully coloured trees and shrubs along the roadway, just a-bursting with spring sap and vivid vitality.

Now, in the evening, I am looking forward to the nightly game of cards with the Beloved, and then a little read before sleep comes.

I have been re-reading some Alexander McCall Smith, and am up to about chapter four of Friends, Lovers, Chocolate. On this second (slower) reading I am finding new words that I bypassed before, and ideas and comments that catch my attention and start me nodding in agreement.

"Eleemosynary" - compassion, mercy, charity - without expecting compensation.....how ideal, but such a strange word to describe the act.

And a little discussion of good and evil and the relative ease with which goodness and good people or evil, and evil people can sound interesting. "Yet the good were worthy of note, of course, because they battled and that battle was a great story, whereas the evil were evil because of moral laziness, or weakness, and that was ultimately a dull and uninteresting affair."

Would that this were recognized in this era of evil's dark glamour, - or has it always been so ?

I do like Isabel Dalhousie, the philosopher/editor in McCall Smith's series "The Sunday Philosophers' Club". She is a lady of many qualities - logic, coolness, curiosity, thoughtfulness, awareness, and a certain boldness tempered with ethical elegance.

I nod in agreement when she describes the id as a "rough, un-house-trained, shadowy thing, wanting to do all those anarchic deeds that the ego and super-ego frowned upon............the bundle of urges and wants that went with being a physical being: the need for food, the need to reproduce - those two alone were enough to cause any amount of difficulty, and indeed were at the bottom of most disputes between people. Arguments over space, food, and sex: id business. This is what humanity's conflicts were eventually reduced to."

Wise words, - I hope that Alexander McCall Smith has many more books to be read and re-read, and that my years stretch out to keep pace with his writings.