Large, wet snowflakes,
and the Quail,
huddled in trios
beneath the sheltering sedum.
Posted by Hildred at 10:33 PM 5 comments: 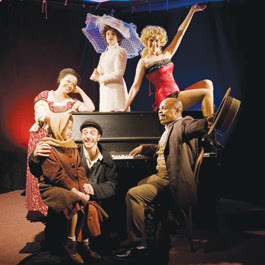 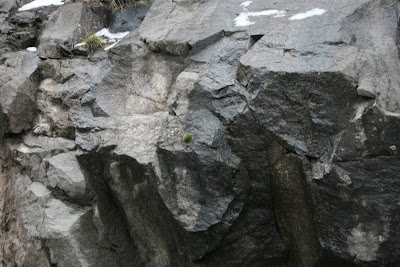 stopped by a flagman
i ponder on the helter-skelter  arrangement of rocks,
wondering how they arrived in that formation
and composition
and what will happen to the small green lichen
when the road workers  toss it aside
and rearrange geological history
Posted by Hildred at 7:27 PM 3 comments: 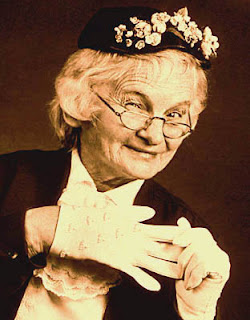 Being rather antiquated, besides being retired, I don't play the organ very often any more.  I fill in where I'm needed, and nobody yet has taken over the organ at funerals, so unless the bereaved import some more sophisticated music you will usually finding me playing the Prelude while the church fills for the service.
This morning, while Charles was away singing, I began to gather my music together for Friday's service.
I pondered about whether to play old hymns, which are often familiar even to those who only enter the church for funerals and weddings (both of which are often celebrated outside the church, and I use the word 'celebrated'  for a funeral service as they are often re-named ' Celebrations of Life'.)
Oh dear, I got distracted.  I pondered over whether to play old familiar hymns or some of the gentle, comforting classics.  My question was answered when I asked the family, who prefer classics.
Tonight I went looking for less complicated versions of Pachelbel's Canon in D,   - it is very jarring when you  hit a wrong note in those long, slow introductory chords and I like to make things easy for myself and my ego....  The other Bach and Handel pieces in my small repertoire present no problems and while I was putting them in order I caught the end of the Oprah show in the background, and her discussion with a gentleman whose name I never did catch about the value of gifts that make a lasting difference in our lives and those material things that please us for a short time (I think they mentioned nine months) and then are forgotten.
And I thought about the gift of music, and the lasting pleasure I was given with the opportunity to study the piano, and felt a great warmth of gratitude for this gift which makes life more pleasant for both Charles and I, because he loves music and gets to listen when I play Scott Joplin for him every morning and I get the joy of doing this!!
A River of Stones
River Stone #26
A rush of syncopated music
and the day begins
on a high note
P.S.  This is Post #700
Posted by Hildred at 9:01 PM 5 comments: 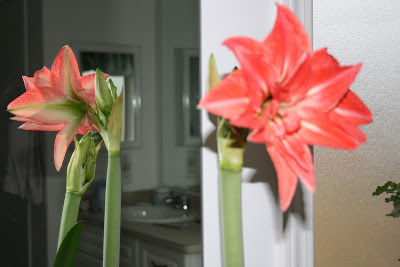 The amaryllis,
checking the back buds
in the bathroom mirror
sighs with satisfaction
Posted by Hildred at 6:23 PM 6 comments:

The letter this week is B

B is for Buble

Michael Buble sings the songs that we danced to in our 'romantic' years, and when I am not listening to The Forties on Sirius Radio I indulge in a bit of nostalgia and listen to Michael Buble, singing a la Sinatra those melodies that live in our hearts.....

For more B's visit here at ABC Wednesday with thanks to Mrs. Nesbitt and her kindly crew.
Posted by Hildred at 8:47 AM 20 comments:

A History of England - at least all that can be remembered.

I have been spending my evenings knitting yet another pair of socks ( a tale to this project) and reading on the computer Ken Follett's "Pillars of the Earth" which has filled me in quite nicely on the times of Stephen and Maud, but while looking for another History of England that used to dwell on our library shelves in the house we moved from I stumbled across an old tattered and torn copy of '1066 and all that" by W.C. Sellar and R.J. Yeatman, c1931!

This book has been in my possession for a few years B.C. (before Charles) and I am not sure how it escaped the general dispersal when we moved, - probably because Sentimental Attachment hid it amongst the books to be kept.  Despite its antiquity I see that the book is still available from Amazon, and well recommended! 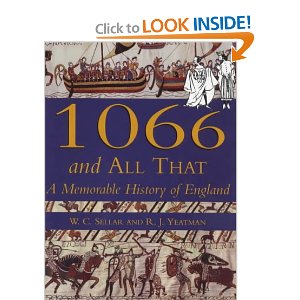 If you want to click and look inside you will have to go to Amazon to get a taste of this 'unique and hilarious spoof', and I would recommend you do that if you are anxious to appear  that you are better acquainted with English History than in truth you really are. This will give you the highlights that should carry you through any conversation about the Island's history that doesn't get too detailed.   And of course, there are now vast numbers of mini-series if you want visual entertainment as well.

If you do click and look inside this is quite likely what you will see, - a fine line drawing of the Magna Garter. 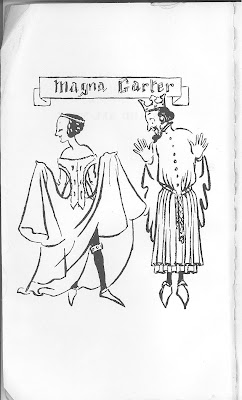 The first chapter will deal with the True English Kings, which ended with Edward the Confessor, since he was succeeded by "Waves of Norman Kings (French), Tudors, (Welsh), Stuarts, (Scottish) and Hanoverians (German, not to mention the memorable Dutch King Williamanmary"
As a Canadian I am particularly interested in the Chapter dealing with George 111, and no doubt some American bloggers remember the part George 111 played in their own history.
However, the part that interests me, and I quote "the elder Pitt at this time had the rather strategic idea of conquering Canada on the banks of the Elbe;  learning, however, that it was not there he told the famous poetic general, Wolfe, to conquer Quebec, instead.  At first Wolfe complained that he would rather write Gray's Elegy, but on being told that it had been written already (by Gray) he agreed to take Quebec.
Quebec was very difficult to approach;  Wolfe therefore rowed up the St. Laurence with muffled drums and ordered his Highland troops to skirt up the perpendicular Heights of Abraham with muffled boots, hoots, etc., thus taking the French by surprise.
At this engagement the French had a very peculiar general with the unusual French name of Keep-calm.
On receiving a muffled report to the effect that Wolfe's men had captured Quebec, one of his aides-de-calm called out: "See!  They fly!"  "Who fly?" asked the General, and, on being assured that it was his own men who were flying, "Thank God!" said Keep-calm, with a sigh of satisfaction.  "Now, I can fly in peace!"
unquote
There are equally discerning chapters on all the other Kings of England and their accomplishments, and scattered through the book there must be enough humour and wit to have accounted for it still being sold at Amazon and also carried on Library shelves
I do recommend it to you, although after the end of the Great War you are on your own, and will have to discover where this mad and merry account of history would have led you if it had only been written later.  Unless you can find the book entitled "1066 and all that - and now all this!"
River Stone #24
History
when viewed from a distance
and lightened with
the yeast of irreverence.
Posted by Hildred at 2:00 PM 2 comments:


a tear,
a memory,
a last goodbye 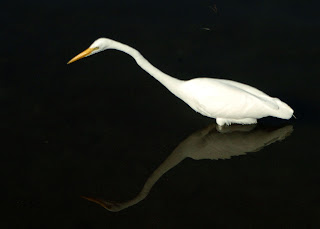 Labels: aros, friends, sorrow
Newer Posts Older Posts Home
Subscribe to: Posts (Atom)
"Thou knowest not what a day may bring forth." —Proverbs