It has been a long time since I read the Daughters of Time. Josephine Tey first came into my life when I was in my twenties, and she, alas, was nearing the end of her life.

Elizabeth Mackintosh, who wrote under the pseudonyms of Josephine Tey and Gordon Deviot, died when she was only fifty-six. As I look back I think - one is so much in their prime at fifty-six. Well, looking back (despondently) even seventy seems young (sigh)

I am enjoying re-reading her mystery novels, and find the hero of these stories, Inspector Alan Grant, so charming he would steal as many literary hearts as Inspector Morse has wooed with his television series. I confess to not having read any of the Deviot plays, not being particularly drawn to this genre because of my love for descriptive writing.

The Tey novels are a wonderful mixture of mystery, characterization and beautiful literary pictures of the English and Scottish countrysides.

A sentence from The Singing Sands, wherein Inspector Grant has met up with Wee Archie, a pseudo revolutionist in sagging kilt and derelict bonnet, possessor of a thin and reedy voice, - as Archie departs from this chance meeting.

"And the dragonfly creature with its mosquito voice went away in the brown distance."

And here, from The Man in the Queue...

"A light rain fell across the window-pane with stealthy fingers. The end of the good weather, thought Grant. A silence followed, dark and absolute. It was as if an advance guard, a scout, had spied out the land and gone away to report. There was the long, far-away sigh of the wind that had been asleep for days. Then the first blast of the fighting battalions of the rain struck the window in a wild rattle. The wind tore and raved behind them, hounding them to suicidal deeds of valour. And presently the drip, drip from the roof began a constant gentle monotone beneath the wild symphony, intimate and soothing as the tick of a clock. Grant's eyes closed to it, and before the squall had retreated, muttering in the distance, he was asleep."

The far-away sigh of the wind, the muttering in retreat, and in between the wildness of the storm. Beautifully expressed.... A wonderful little paragraph that paints a picture, tells a story and provides background music all at the same time through the creative use of words. A plus to the endearing qualities of the stories she tells. Tey's work is scattered throughout with such delightful phrases, sentences and paragraphs. What a shame that we lost her so early.

I pass these books on to Husband, to share the pleasure.

Hot weather and the garden is spreading out in all directions, with total abandon.

The roses have finished their first flush and the delphiniums appear a little shabby, but the lilies are coming into their own, along with great swathes of shasta daisies.....

I spent an hour making lavender bottles today, - felt quite frivolous after all the toing and frowing of the go-fering job. Big Smiles.....inside and out. 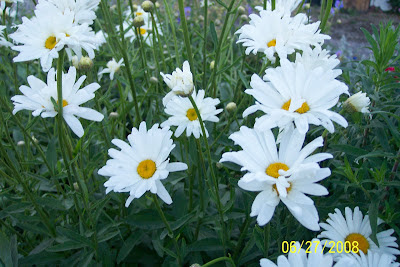 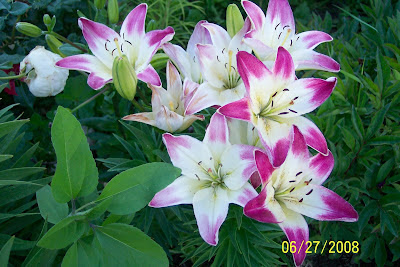 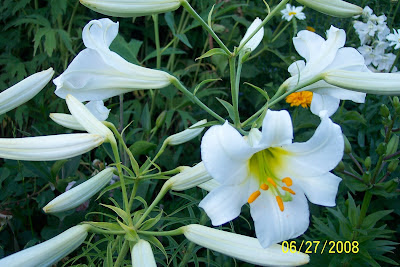 Posted by Hildred at 9:55 PM No comments:

ONE HUNDRED AND FIFTY YEARS - REALLY, REALLY. ARE YOU SURE?

When we first began to hear about the one hundred and fiftieth birthday celebration of the Province of British Columbia Husband and I looked at each other in disbelief.....

Can this really be?

It seems like only a decade or so ago that we attended the Centennial Ball in Victoria, - surely fifty years can not have passed while our eyes twinkled and our feet danced and our children grew up and life went on.

Is it because we are no longer young that this celebration doesn't seem to have the spontaneity and excitement of the 1958 Centennial? Or is it a more sophisticated age and community is no longer of great importance?

This was a time Before Television, - whose advent (and our pernicious use of the media) is, in my opinion, responsible for a lack of interaction between people, a loss of neighbourhood and the push that started us on the slippery slope in the proverbial handcart.

It was the golden years of the Fifties when kids still played outside, creatively, dinner at night was a family affair, - just before we slid into the Sixties and the world turned sideways, at least.

It was a time when people didn't stay home to watch the Simpson's or the Sopranos but instead plunged into the Real Life where Real People were doing things.

All over the Province there were Centennial Committees with marvelous ideas that drew people together. Plans were made, projects were started, books were written and a exciting and celebratory time was had by all.

On June 26th, 1958, in the little village of Cawston where we farmed (five miles down the valley from where I now sit) there was a splendid summer day set aside to honour the pioneers of the District with a special luncheon. There was dancing, and music, a gymkhana and much merry making.

Alas, when in my mind's eye I picture the members of that Committee it comes to me with sadness and nostalgia that Husband is the only one left . He was probably the youngest, and the Chairman.

For which he got a nice award of merit 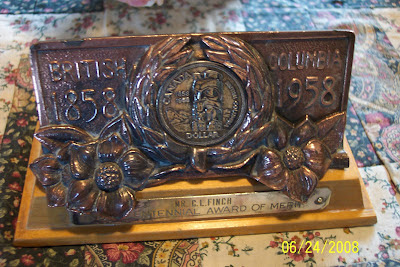 And we got t0 dress up and go to a Centennial Ball in Victoria. 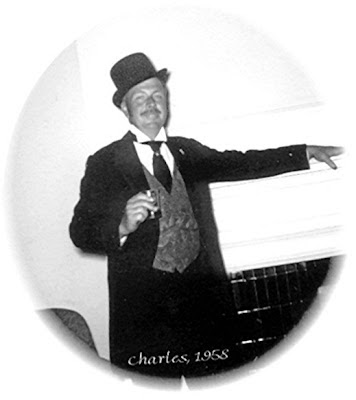 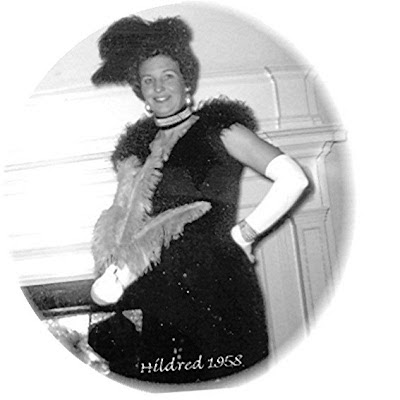 Lovely memories....
Posted by Hildred at 7:48 PM No comments:

Labels: Centennial memories
Newer Posts Older Posts Home
Subscribe to: Posts (Atom)
"Thou knowest not what a day may bring forth." —Proverbs