F is for Frog and also Freakin' Fantastic Fried Rice


When one can not make up one's mind
then it falls to one to present
F in Twos....

Shall we start with Hilaire Belloc, who wrote a compassionate
poem to The Frog 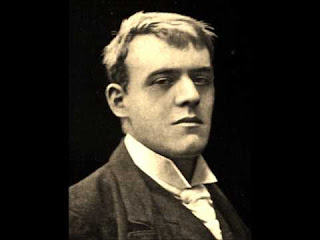 A twentieth Century English Poet
controversial, but nevertheless praised
for his humour and poetic skill
Belloc was said to be the best English writer
of light verse
since Lewis Carroll and Edward Lear.

Be kind and tender to the Frog
And do not call him names
as "Slimy-Skin" or "Polly-wog."
Or likewise "Uncle James,"
Or "Gap-a-grin".
or "Toad-gone-wrong,"
Or "Billy Bandy-knees":
The frog is justly sensitive
to epithets like these.

No animal will more repay
A treatment kind and fair,
At least so lonely people say
Who keep a frog (and by the way,
They are extremely rare). 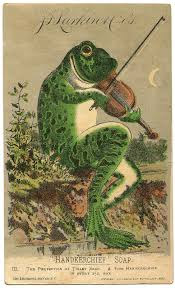 Hilaire Belloc's Book of Beasts,  to be followed by
More Beasts (For Worse Children)
are quite hilarious and I don't know why I have not
thought to buy them for the great-grands...

And now let me tell you about this Fantastic Fried Rice recipe
which was one of my father's creations
in his later years, when he was alone.

To get the perfect fried rice you will want to use yesterday's rice
as it will have had a chance to dry out a bit.

Let your pan warm up nicely,  It will ensure that whatever ingredients
you use will fry quickly and that each grain of rice
gets hot to the core.

Don't poke, prod or turn and make the rice all soggy,
and if you are going to add other ingredients
(like shrimp, or veggies)
cook them separately and put to one side,
adding them at the last.

You will need two to three cups of day old rice, sixteen shrimp, or thereabouts, medium sized.
a half to one cup of red onions, and garlic if that is one of your staples.
half a cup of peas and half a cup of corn
or whatever other veggie you might have in your fridge
and a little bit of chili powder

Wash and marinate the shrimp with a tsp of chili powder and salt
for about half an hour.
In a wide mouthed pan heat 1 tsp of oil and add the onion to saute.
mix up the peas and corn (or other veggie) and stir in....

set aside in a separate container....

Then, in the same pan heat another tsp of oil and cook the shrimp
till it is just done.
Add the rice, check for salt, let it stay in the heat
until the rice is heated through.

Mix all together gently, and enjoy!! 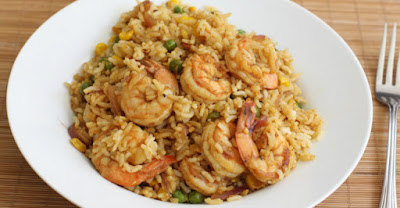 My Dad was very casual about this dish
as I am, too.

All sorts of interesting things go into it.
Try some mushrooms.
And a dab of pickles.
An egg or two - oh, but that's something altogether different....

More interesting Fs here
at ABC Wednesday
with thanks to those who maintained this charming meme
in the past, who do so in the present
and plan for the future.