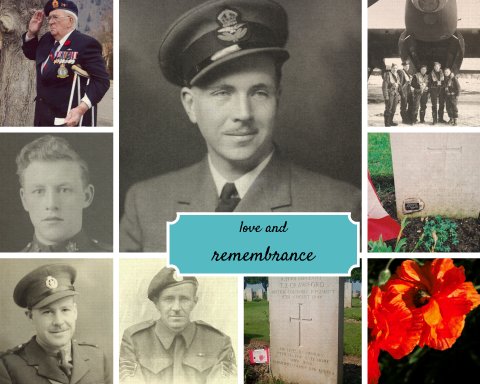 As I prepare to attend Remembrance Day services
in the morning

I remember especially with love

My father
who squeaked into the lines
of the 31st Battalion
despite his young age,
and was wounded at Cambrai
on the 11th of October, 1918

My darling husband,
and the band of brothers
who were his crew -
those men who kept the bond close
for seventy years
until death came to each of them.

My two brothers-in-law
who I never met,
and who left a void in their families' lives
when they were killed;
one at Falaise,
and the other in the Hochwald Forest.

We visited their graves when
we traveled to Europe in 1995...
Charles carrying a small rock from the
hills of home which he had
embedded in a plaque and
attached to their graves
- a bit of home to keep them company
as they lay at rest far
from those who loved them best.

As the service progresses, and we come to the
Reading of the Names of the Fallen
my heart catches
and I hear echoes of my
dear one's voice
as he called the names over the years...

I am grateful that there are no sons' names
to add to the list of
the bravest and best.....

The letter is R for Rooster 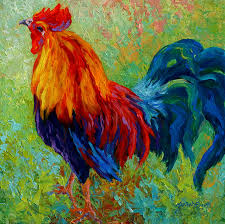 More Rs here at ABC Wednesday
with thanks to Roger, Denise, Leslie

and their resolute helpers


It was yesterday -  Sunday afternoon, -  and I was late tuning into
Radio City on Knowledge Network.

It is one of the highlights of my Sunday, and how could I have forgotten -
should I blame the time change???
We have said goodbye to Daylight saving and now it is lighter in the morning,
but darkness falls earlier and the evenings are long.

In any event, I did join Radio City soon after the program started
and was delighted with the Orchestrae de Paris
as they performed Mozart and Haydn,
and most especially with the legendary pianist,
Menahem Pressler.

At 92, and the survivor of a threatening aneurysm, his performance
was amazing and impressive.
I believe the program was recorded in the past,
and perhaps at that time he may have been only 90 years of age,
but there was a sweet smile as he played,
and his lips moved in concentration as he lived the music.

And what's a couple of years after all those decades...?

Well, I can tell you, there is a difference, and I speak from experience..
two years ago I could operate a can opener,
but now I am on the look-out for an electric appliance
that requires one only to press a button!!

For an encore Pressler played Debussy's Claire de la Lune.
He smiled a lot at the audience,
and I smiled a lot with pleasure
and the chance to hear him perform....

Here is a short video of him making his debut with the Berlin Philharmonic in 2014
Mozart's Piano Concerto No. 17.

I knitted a bit while I watched, and sighed contentedly when it was over.

There was still a little time before supper,
so I picked up the book that I am trying to finish before a
Monday night meeting of the Book Club
where we will be discussing "The Pearl that broke its Shell" by Nadia Hashimi,
- a generational story portraying Afghanistan
'in all its perplexing, enigmatic glory'.

An absorbing and troubling book, when one considers
that the lives of some of the women in Afghanistan
are fraught with male domination and sometimes cruelty.
As I read towards the end of the book
I am comforted by the indications
that change is happening in the cities
and perhaps even in the villages as women grow more courageous
and men more enlightened.

I still have 62 pages left to read,
and my thoughts to put into order....

"Nadia Hashima left Afghanistan in the 1970's
and was raised in the United States.
In 2002 she visited Afghanistan for the first time
with her parents".

She is a pediatrician and lives with her family
in suburban Washington D.C.