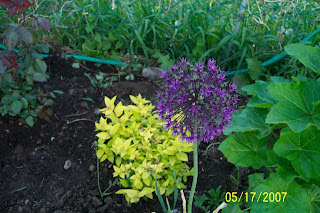 Ever Changing - Ever Beautiful

While in the garden this afternoon, intent upon cramming just a few more heart's desire plants into the little moon shaped crescent that contains a few plants from the Lost Garden, but more and more that travel home from the local plantland, in guilty secrecy.....

Of course the plants we so lovingly dug in last year have increased in beautiful green girth and height. Where I put pots to fill in empty spaces the trailing perennials have escaped into the garden and provide a groundcover in the most unexpected places.

And I am neither speaking to, or about the Yarrow in case we should get too familiar and it will affect the devastating action I am going to have to inflict on them. Yarrow is lovely, and the beautiful muted shades of rose and creams and yellows are pleasing, but it is a naughty plant and doesn't know its place!! Which is definitely not in amongst the peonies, the iris, the shastas, and in the midst of any other plant that takes its fancy. Or along the edge of the path, where last year's alyssum are bravely trying to volunteer.

Every day in the garden is different. 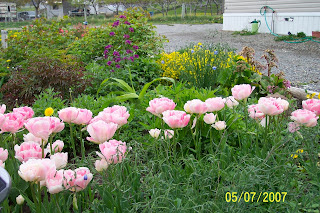 The gorgeous pink tulips gradually spread their petals into heart catching maturity, but they have faded now and it is the turn of the iris to provide the spectacular spots. 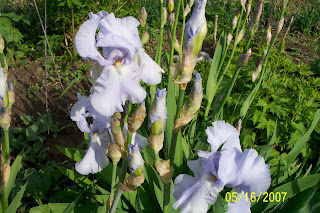 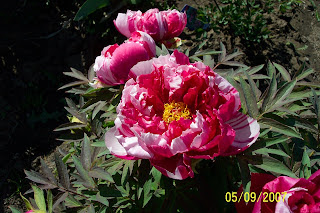 The little baby peony tree was a vision for a few days, but has settled down now to making roots and growing a good strong trunk and limbs.

Everywhere small plants are opening small blooms, and big plants are spreading and showing off green muscle - twice as big as they were last year. The little clump of Lambs Ear has expanded into a large soft grey mound, pushing at the peony bush p 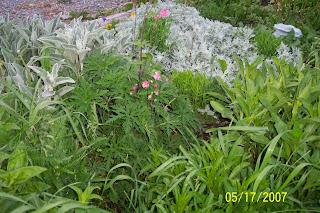 lanted next to it. Our landscaping grandson looks askance at the crowded conditions, shakes his head and gives advice that unfortunately is a year too late.

I think that this garden will fulfil its loveliness by being a "sharing" garden - in the meantime it gives me great joy to see this wonderful symbiotic relationship we have with each other....

Posted by Hildred at 8:24 PM No comments: 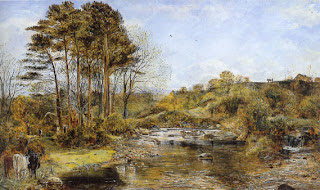 The year's at the spring
And day's at the morn;
Morning's at seven;
The hillside's dew-pearled;
The lark's on the wing;
The snail's on the thorn:
God's in His heaven—
All's right with the world

These words of Robert Browning echo the feeling in my heart and my spirit is lifted this morning, beyond belief!!

Some mornings are like that - I suppose you have to be a morning person to experience this euphoria, but some mornings are just filled with the rightness of things, and the joy of living, and I give thanks for the blessings that daybreak brings.

Posted by Hildred at 7:39 AM No comments:

Posted by Hildred at 3:09 PM No comments:

Labels: Mothers
Newer Posts Older Posts Home
Subscribe to: Posts (Atom)
"Thou knowest not what a day may bring forth." —Proverbs