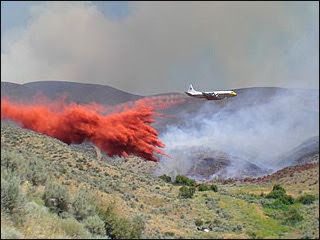 Those Lazy, Hazy, Crazy Days of Summer are upon us.

The haze is coming up the valley from a fire just over the US border at Nighthawk.

ture. Everyone sleeps, - Caspar the dog, Callie, the Cat, and Husband and I snooze along with them.

To make up for it we are up long before the sun rises. There are windows and doors to open wide to the comparative coolness of the early hours. And it's the only time to garden seriously.

Evening hours aren't conducive to the same kind of activity, - they are more a wandering, snipping, camera snapping time.

And the craze??? Somehow we manage to avoid that, having passed the age of beaches and wild parties long, long ago.

The days drift by, - we recall picking apricots when the temperature was 117F, and the years when our only air conditioning was a sprinkler on the flat roof of our house. The water falling and swirling outside the windows gave an impression of coolness, and we were young and quite willing to believe that it cooled the house and the shade trees surrounding us.

Now that we are "older" we are happy with the air conditioning that keeps the house at a mean temperature of 72. Spoiled, spoiled, spoiled!

Having finished Rutherfurd's mighty tomes on the Princes and Rebels of Ireland I do a little light reading. My trip to the wool shop resulted in the purchase of some space dyed wool, and in odd moments I knit a few rows, delighting in the constant change of colour. On the loom the warp (oh yes, still the sam 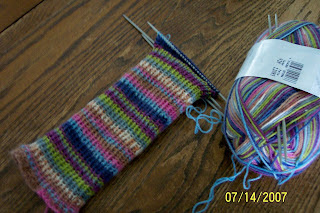 The music we listen to is light and airy, and I am practising Handel's Water Music to play pianissimo on the organ in church tomorrow.

Heavy is a word that is banished from my vocabulary whilst we are under the weight of the summer sun.

On Tuesday we make another trip to Penticton, and the weatherman, whose word we take with a grain of salt, promises that the weather will be a little cooler. 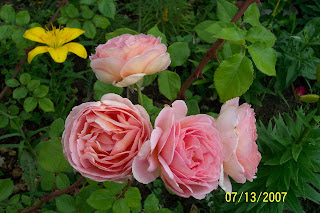 Here is the Abraham Darby rose in the morning, - a lovely symbol of Summertime.
Posted by Hildred at 6:06 PM No comments:

Labels: ..and the living is easy 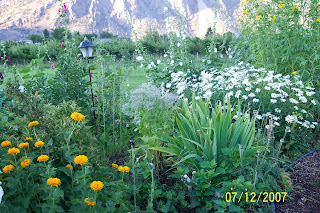 I rise early, and am met at the bedroom door by Miss Callie and Caspar, eager for the day to start. After turning on the coffee and the computer, and opening up all the doors and windows to the cool morning air, Caspar and I venture out for our morning walk. We peer into the jungle as we pass and assess all the piles of deadheaded flowers and stalks that are a result of last night's orderly march down the garden path, snipping and shearing as I went.

After returning Caspar into the house I retrieve the wheelbarrow and start clearing the debris. What is left gives me some pleasure, and here are a few pictures I took before the sun came up and the temperature suddenly rose from 17C to 30C at eight o'clock. 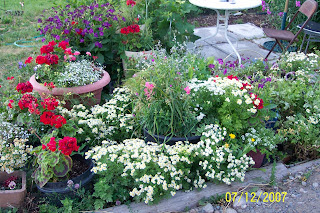 The pots that surround the little patio are refreshed by their morning watering.


The sweet peas that climb the fence on the other side of the patio are growing ever more robust, and although they don't have the fragrance of the annual sweet pea that I remember growing so 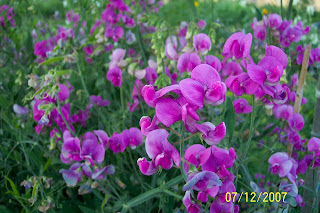 tall and beautiful on the prairies, they do have an air about them that is pleasing and subtle. 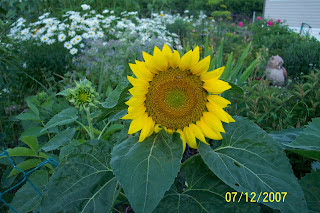 Here is a sunflower with an interesting face, - the gorgeous green in the centre is a wonderful foil for the colours that surround it.

This baby is a reasonable size, but as we move into the back border the jungle takes over, and here are the sunflowers that grew too fast for me to thin, splendid as they tower over the more civilized flowers in the garden. 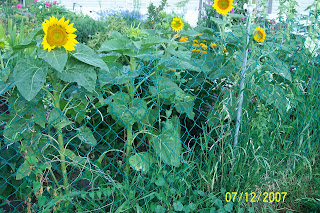 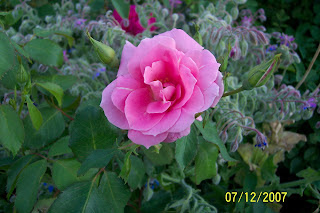 Like the roses, that are just now into their second flush and looking fresh and pristine in the coolness of the morning.

By afternoon the garden will bear a rather harried look as it tries to cope with this intense heat we are having.

While I wander around I mentally note the Europa Rose and an especially fragrant lily lost among the shadows of the sunflowers and the barn flower, - why did I think that the barn flower which only grew about four feet high last year would stay at that unnatural height. I make a note to move it to a spot in the back garden and let the Europa have its place beside the pathway.

And that Sea Holly that was such a modest and well behaved plant last year has spread its children around its feet and grown at least five feet high. 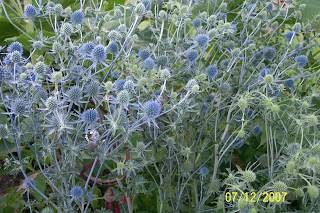 A garden is a lovesome thing, God Wot, - but it is also a humbling teacher, even as age is supposed to bring you Wisdom.

Never mind, even jungles are inspiring, - especially if the lions and tigers that lurk there are just a little tortoise shell cat and a dapper old dog. And an "older" lady with her hoe and snippers!
Posted by Hildred at 8:51 PM No comments:

Labels: The lessons we learn in the garden 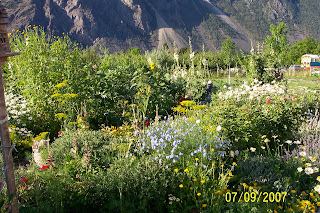 July in the Jungle (er, Garden)

Early in the morning, just after the sun came up, Caspar and I went out to test the morning air.

We skittered through the door, safely enclosing Callie the Cat indoors. This was her morning for no breakfast, no water, and a quick trip to the Veterinarian where she now sleeps away the afternoon after having had surgery this morning, of the most personal kind!

It was cool in the garden, - the flowers looked refreshed after yesterday's attention to watering. Still looks like a jungle out there, with the fertile growth that summer has brought. The sunflowers, just coming into bloom, are at least ten feet high, but they are dwarfed by the volunteer hollyhocks who somehow crept into the garden to delight my soul with memories. 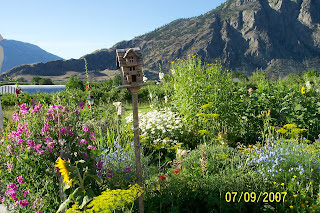 The perennial sweet peas have outgrown their headboard climber and are reaching their pretty pink blossoms to the blue sky above.

The flax still adds tender blue flowers in the morning, but in the evening, when the nicotiana is at its most fragrant best they have closed up shop, back in the workroom preparing for tomorrow's greeting to the sun. 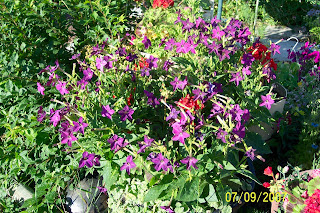 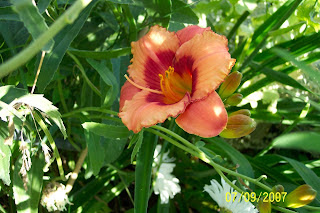 The new day lily, Strawberry Candy, which took up residence this spring, is occupying a highrise between the Stella D'Oro and a great clump of Shasta Daisies.

And the white Winchester Cathedral Rose is tentative about beginning a new flush of blooms. 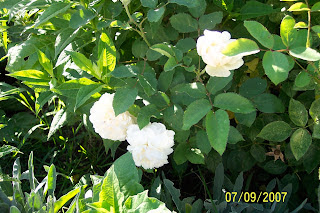 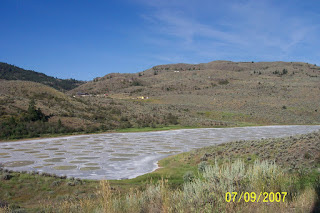 Soon it was time to gather up the patient and leave for the trip over the pass to Osoyoos and the Veterinarian. After a few miles of plaintive meowing Callie seemed to accept the inevitable and settled down to enjoy the pleasant early morning trip. The air was fresh, the highway was deserted, and we arrived at the Clinic in good time to deliver Miss Callie to her Fate, ever to be a Miss - never to be a Missus.

On the way home we stopped to take a picture of the medicinal Spotted Lake.

After a time I gathered up my machete and my trusty clippers and went about my business of restoring the jungle to a garden again. The borage, with it's lovely blue flowers and bumblebees, was reduced to half its size. The delphinium are now cut right back, to give them room for a later blooming. Found some stakes to help the sea holly remain erect and on guard with it's spiky blue flowers and deadheaded zillions of white bloom on the Shastas.

Caspar was with me, searching up and down the garden path for his pal, Callie. He will have to wait until tomorrow morning when we make the trip again and bring home a somewhat subdued cat, - I'm sure!!!!
Posted by Hildred at 3:52 PM No comments: