The letter is D for Dragon 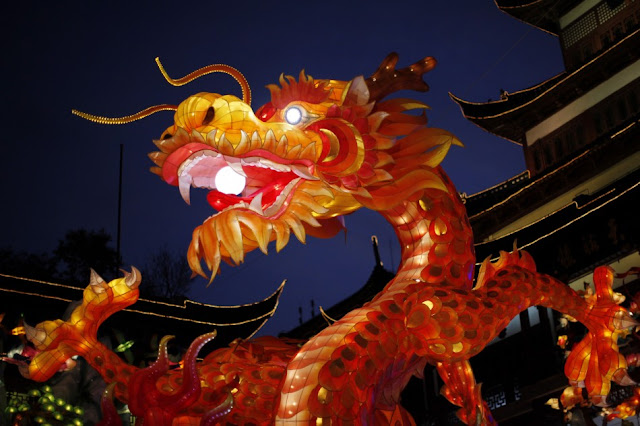 "The Dragons of the mountains have scales of a golden color, and in length excel those of the plain, and they have bushy beards, which also are of a golden hue;  and their eye is sunk deep under the eyebrow and emits a terrible and ruthless glance."

This is a Chinese New Year Dragon, parading in the streets
in all his fiery glory.

A dragon is a mythological representation of a reptile.
In antiquity dragons were mostly envisaged as serpents
but since the Middle Ages they have grown legs
and now resemble a lizard.

And they are able to emit fire from their mouths,
as many a mythical hero has found out!

Different cultures have different stories about monsters
that have been grouped together under the dragon label.

They are often revered as representative of the primal forces
of nature, religion and the universe
and possess some form of magic or other supernatural power.

The Dragon has not been forgotten by the poets......

Here is J.R.R. Tolkins take on dragons
as expressed through Tom Bombadil

There was an old dragon under gray stone;
his red eyes blinked as he lay alone.
His joy was dead and his youth spent,
he was knobbed and wrinkled,
and his limbs bent in the long years to his gold chained;
in his heart's furnace the fire waned.
To his belly's slime gems stuck thick,
silver and gold he would snuff and lick:
he knew the place of the least ring
beneath the shadow of his black wing.
Of thieves he thought on his hard bed,
and dreamed that on their flesh he fed'
their bones-crushed, and their blood drunk:
his ears dropped and his breath sank.
Mail-rings rang.  He heard them not.
A voice echoed in his deep grot:
a young warrior with a bright sword
called him forth to defend his hoard.
His teeth were knives, and on horn his hide,
but iron tore him, and his flame died.

Then, of course, there is Ogden Nash's version of a Dragon

Belinda lived in a little white house/with a little black kitten and a little gray mouse/and a little yellow dog and a little red wagon, and a realio, trulio,little pet dragon.

Custard the dragon had big sharp teeth; and spikes on top of him and scales underneath/
Mouth like a fireplace,chimney for a nose,/and realio, trulio, daggers on his toes.

Belinda tickled him, she tickled him unmerciful/ Ink, Blink and Mustard, they rudely called him Percival./They all sat laughing in the little red wagon/ at the realio, trulio, cowardly dragon.

Belinda giggled till she shook the house/and Blink said Week! which is giggling for a mouse./Ink and Mustard rudely asked his age,/ When Custard cried for a nice safe cage.

Suddenly, suddenly they heard a nasty sound/and Mustard growled,and they all looked around./
Meowch! cried Ink, and Ooh! cried Belinda/ For there was a pirate climbing in the winda.

Pistol in his left hand, pistol in his right,/and he held in his teeth a cutlass bright/his beard was black, one leg was wood/it was clear that the pirate meant no good. 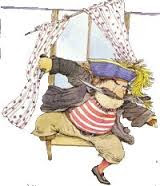 Belinda paled and she cried,Help! Help!/but Mustard fled with a terrified yelp / Ink trickled down to the bottom of the household/    and the little mouse Blink strategically mouseholed.

But up jumped Custard, snorting like an engine/Clashed his tail like irons in a dungeon./With a clatter and a clack and a jangling squirm/He went at the pirate like a Robin at a Worm.

The pirate gaped at Belinda's dragon. and gulped some grog from his pocket flagon./ He fired two bullets, but they didn't hit/and Custard gobbled him, every bit.

Belinda embraced him, Mustard licked him/No one mourned for his pirate victim. |Ink and Blink in glee did gyrate/ around the dragon that ate the pyrate.

But presently up spoke little dog Mustard./I'd been twice as brave if I hadn't been flustered/ And up spoke Ink and up spoke Blink/ We'd have been three times as brave, we think../And Custard said, I quite agree/That everybody else is braver than me.

And there is Puff, the Magic Dragon, but we all know about him
so will leave him for another time. 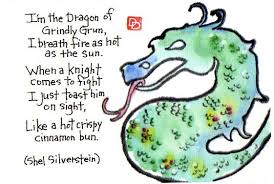 More Ds here at ABC Wednesday
with many thanks to all who labour at this meme,
and make it possible to go on, and on, and on....