The Mountain Ash  (The Rowan Tree)

I have not been on intimate terms with the Mountain Ash, - I see them around town, and admire their cheery red berries, but not until we moved here in town have I been able to spend any time with them.

The snow keeps coming, intermittently.  We expect another few centimeters tonight but I think this is just a ruse on the part of spring, - she needs more time to burst forth in all her glory and so she dallies on the path, sending little March messages ahead of her to foil our expectations.

Nevertheless, when I was out in the garden the other day, examining each nook and cranny for bits of greenery or swelling buds, I came upon the Mountain Ash in the back garden, looking quite elegant, its bark displaying that lovely vibrant shade that speaks of rising sap and swelling buds.  There are two narrow, slim Rowans  - one at each end of the raspberry patch, but only one of them had these gorgeous pointy grey-green buds..... 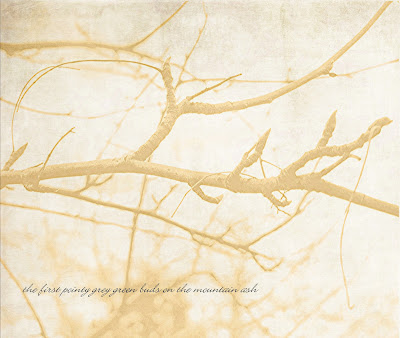 Yesterday morning, when the snow was still on the ground and the trees carried it as garlands, just along
the street was this lovely Mountain Ash, festooned with scarlet globes. 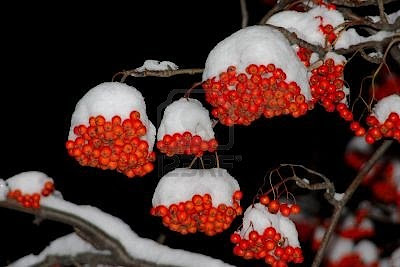 More snow tonight, says the weatherman, but spring is close enough that the buds will remain and continue to swell, until all is a tender green again.

I am so impatient!!!

G is the letter this week

G is for Gryphon, or if you prefer, Griffin 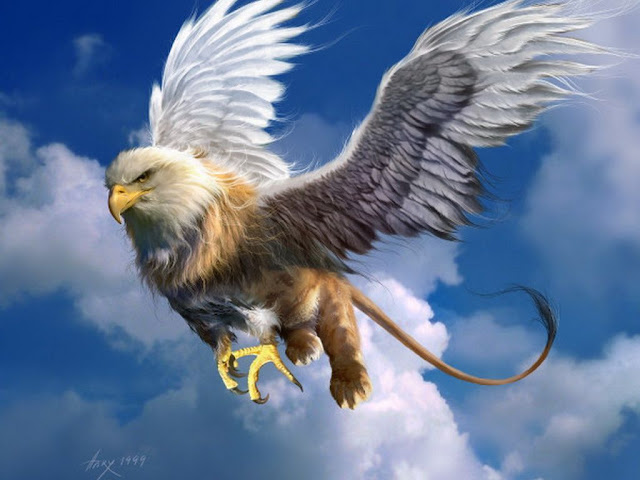 In Dante's Divine Comedy Beatrice meets Dante in Earthly Paradise and takes off into the Heavens to begin Dante's journey through paradise, seated on a flying Griffin that moves as fast as lightning.


St. John Mandeville wrote about them in his 14th century book of travels:

"In that country be many griffins, more plenty than in any other country.
Some men say that they have the body upward as an eagle and beneath as a lion,
and truly they say sooth,that they be of that shape.
But one griffin hath the body more great and is more strong than eight lions.
of such lions as be on this half,
and more great and stronger than an hundred eagles
such as we have amongst us.
For one griffen there will bea, flying to his nest, a great horse,
if he may find him at the point, or two oxen yoked together,,
as they go at the plough.
For he hath his talons so long and so large and great uipon his feet,
as though they were horns of great oxen or of bugles or of kine,
so that men make cups of them to drink of.
And of their ribs and of  the pens of their wings, men make bows,
full strong, to shoot with arrows and quarrels.

and OLIVER HERFORD. an American writer and illustrator, writes humorous verses about the Gryphon

It chanced that Allah, looking round,
when he had made his creatures, found
half of an Eagle and a pair
of extra Lion legs to spare.
So, hating waste, he took some glue
and made a Gryphon of the two........

This is about all I can tell you about the Gryphon, but over at Mrs. Nesbitt's ABC Wednesday you can find out lots more about the letter G.  Click here.  And Lewis Carroll has more to say about the Gryphon
and his friend the Mock Turtle, if you care to Google him. 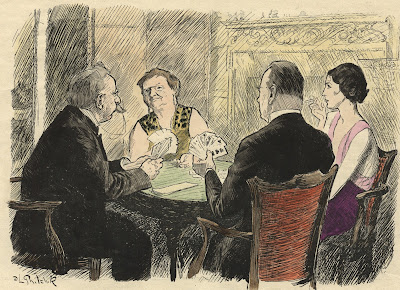 Gathering up the ragged edges of winter we sallied forth yesterday morning.   There was a chilly wind, but the sun shone with some determination, and we stopped at the Senior's Centre for a cup of coffee and a look-see as to the condition of the Saturday morning bridge tables.  Did they need a spare?  Were there people hanging around looking for two more out of practice bridge players to make up a table??? 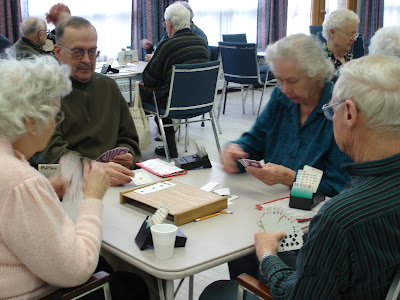 There was only one vacant chair, and whoever was dummy was hopping around from table to table, filling in.  We had a cup of coffee.  Charles got into deep conversation with other drop-ins, so I went to take the place of the rotating dummy, feeling a little nervous as it has been many years since bridge was a steady and pleasurable part of our lives, and I did feel a little like a dummy, nervous and hoping that the others at the table were kind bridge players, - not the snippy types who make no bones about it and look down their nose when you bid inadequately, of trump your partner's Ace!  Oh, I have never done that......but it happened to Charles once.  Iris trumped his Ace, and he was such a sweet gentleman about it, - never blinked an eye..but it has gone down in history as one of our bridge stories!

All went well, and I enjoyed the game, but when we came home and were having a little conversation about who did what and why, etc. I began to think of the many Saturday nights we spent with friends, visiting, playing bridge and cementing the bonds of friendship. 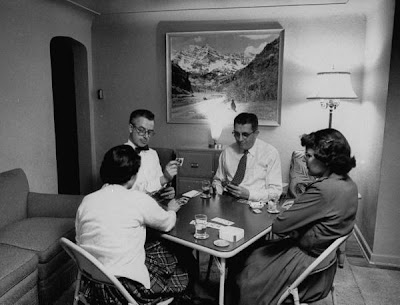 A small dish of bridge mix in opposite corners of the table, a drink by your elbow, perhaps an ashtray close by, it being part of the time before smoking became such a dreadfully dirty habit and was instead a few moments of relaxation.

No stress.   Unhurried games, interspersed with friendly discussions, a few laughs, a few taut moments when it came to the opening bid, - they were wonderful times and we played bridge whenever we could, - Saturday nights, Sunday afternoons, impromptu get togethers - a few hands here, a few hands there - marvelous cheap entertainment.  Pickles and crab sandwiches waiting in the fridge for when we reluctantly put the cards away, but still replayed the most memorable hands of the evening and sat around talking, sometimes until the small hours of the morning.  And probably there was further pillow talk if the cut of the cards happened to present one with their spouse for a partner!!!

You know I'm livid, - you went to bed with an Ace


Eventually, as the children grew older and we grew busier, our entertainment grew more sophisticated and the bridge games happened less frequently, but at least once a month there was an invitation to "come to dinner, - I'll make a lemon pie for Charles and we'll play some bridge later".

Time passed, as it is so wont to do, and now we have lost many of those friends we played bridge with, to death or dementia, - we would be hard pressed to put together a foursome of old and dear friends for bridge now.

So we will go back to the Senior's Centre and play bridge with old acquaintances, and strangers, who will in the course of time become friends,  and life in town will continue to present all sorts of lovely surprises.

There is blue sky and sunshine this morning, - after a cup of coffee I think I will go out and pick some pussy willow branches and poke about to see if anybody planted daffodils in this lovely mini garden, and reminisce a little about days gone by and friends who live only in our memories.