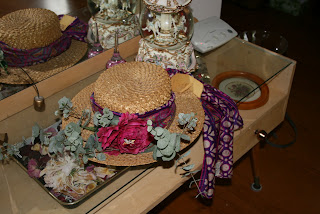 I was up early this morning gathering flowers for the Museum's Fancy Hat Tea in between showers.

Luckily this was not an out-door affair

Before I went to pick up my friend, Margaret,  Charles took a sideways picture of me.
I managed to straighten it out, but I still look rather startled and in fear of the
whole concoction sliding off my head. 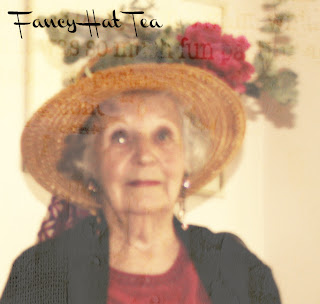 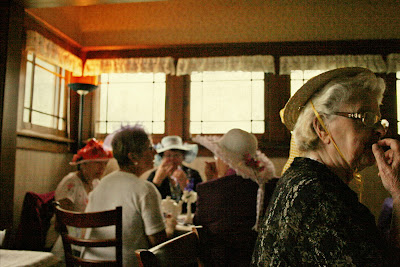 There were lots of outlandish hats. and some quite beautiful ones.

The sweets were dainty and rich, and I think it was the mini cream puff that finally gave me heartburn...

Although it could have been the chocolate covered strawberry.... 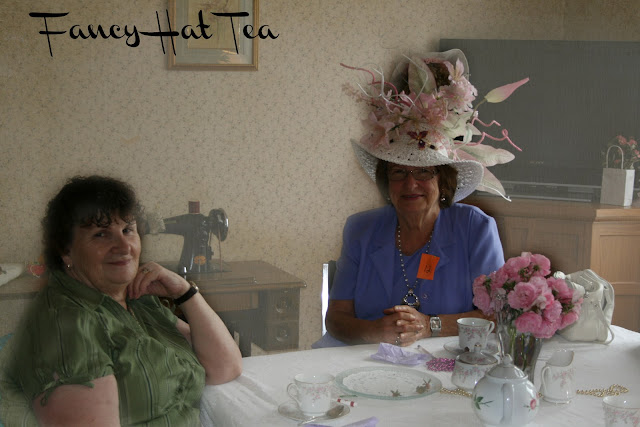 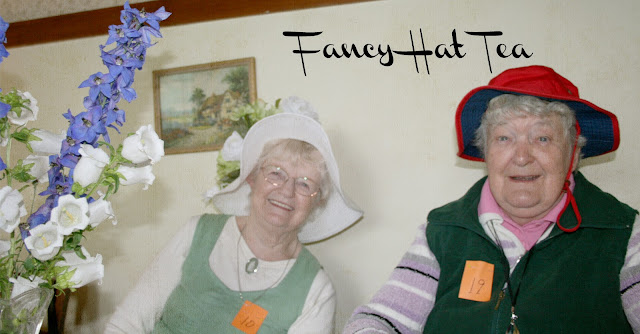 We had a nice chatty time catching up with news and friends, but Margaret and I didn't stay long

We left in the middle of another shower, but I had the wit to take an umbrella and we didn't stop to have our tea cups read in the tent on the lawn, so we got home dry - although not knowing what the future might hold for us as predicted by the tea leaves.

As I backed down the driveway I realized that large hats were made for a different time, - the time of horse-drawn carriages, when the horses knew the way home, and you didn't have to look over your shoulder to check for traffic.


Charles was waiting at home, and it was soon time for happy hour, so altogether a nice Saturday afternoon
and the Museum raised a little money to add to the fund for a new building - the old Museum is squeezed into a small building, complete with cells, that used to be the police office and jail in early days..... 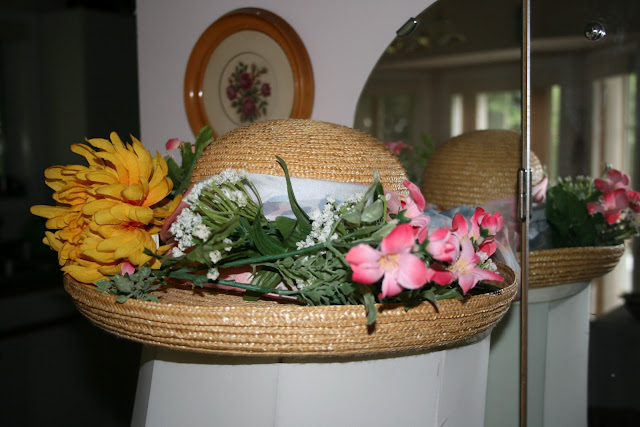 They say it will rain again tonight, - the river level grows higher and there is still high snow to come down.
Charles shakes his head and mutters dire warnings.


This and that on the first day of summer!! 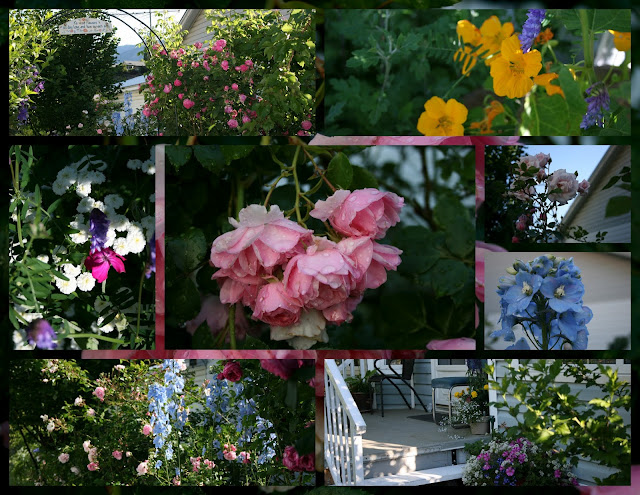 We wakened early to a morning sky blue as the inside of an old fashioned mixing bowl
not a cloud to be seen!

Charles went to shower, and I rushed outside to turn off the overnight sprinklers
to bring up the water pressure in the house - quickly, quickly!!

The air was so clear and the morning so beautiful!
Immediately after turning the coffee on
Callie the cat, the camera, and I went outside, - all three of us.

Long shadows and the roses still glistened with sprinkler water.
I took a picture of the new steps David laboured over yesterday -
much wider and more hospitable and welcoming.
And I thought how fitting it was that someone came and snatched away all the grey clouds
and left this  gorgeous summer morning in their stead!!

We breakfasted.  Dorothy came for coffee and we examined carefully
the dinosaur egg that Charles got for Father's Day and which has been sitting
in a punch bowl full of water for the last 48 hours, incubating. 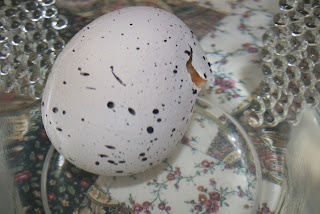 Charles was all for smacking it gently to start the process
but Dorothy pointed out that if a dinosaur egg has no other purpose
it could at least teach one patience.

Later in the day, when Charles had gone over town to gossip with the Barber
and get his hair cut,  I passed by the table and the egg had begun to crack open, but there is still just
a small portion of the 'dinosaur' poking what looks like one small foot outside the shell. 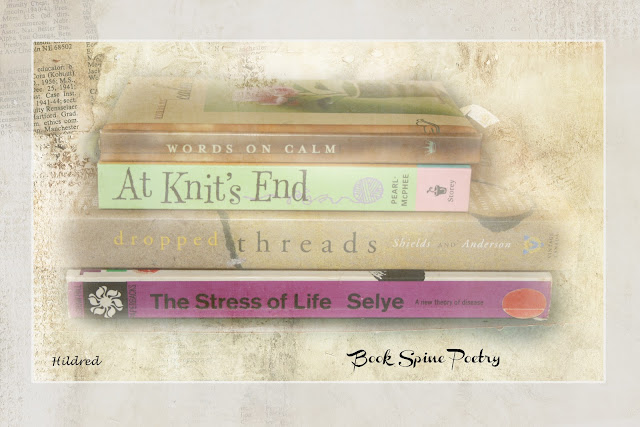 I whiled away the morning at the computer, editing pictures of a stack of books whose spines spoke of a poem - of sorts. I see I was so enthusiastic that it is now pretty well impossible to read what the 'poem' says, thus defeating the whole endeavour!

words on calm
at knit's end
dropped threads.
the stress of life

I am resting my hip, which now seems to be getting better, making the use of the cane
a temporary nuisance (but very helpful I hasten to add, in case the cane has tender feelings).
And besides, I still need it to help me rise up and get mobile!!

While resting  I knit a bit and read a lot.
Thomas Firbank's wonderful account of his trek through Wales after World War Two,
'A Country of Memorable Honour'.

The back cover says 'this book is more than an account of walking through Wales.  It is an account of the exploration into the hearts and minds of people from all walks of life".  And indeed it is.

Nicola and David popped in on their way home to the Chilcotin, and Dorothy came
to lend encouragement to the baby dinosaur, and so this lovely first day of summer has passed.

Time for bed, and I look at the prayer I have posted on the door of the computer desk;
to my left, and close to my heart.

God.  It is night.
The night is for stillness.
Let us be still in the presence of God.
It is night after a long day.
What has been done has been done;
let it be.
The night is dark.
Let our fears of the darkness of the world
and of our own lives rest in you.
The night is quiet.
Let the quietness of your peace enfold,
all dear to us, and all who have no peace.
The night heralds the dawn.
Let us look expectantly to a new day,
new joys, new possibilities.
In your name we pray.
Amen.

W is this week's letter

W is for Windhover and for Weaving


Have I done this before?  I might have, - The Windhover by Gerard Manley Hopkins has been one of my most loved poems for many, many years and when I was a passionate Weaver, in my younger days, I called my small enterprise Windhover Weaving and had a great multitude of cards printed, enough for an extensive and expansive enterprise.  I sometimes use them for lists now, - not grocery lists, but more important lists

of plans and books and music and suchlike.

They stir fond memories of my Weaving days. 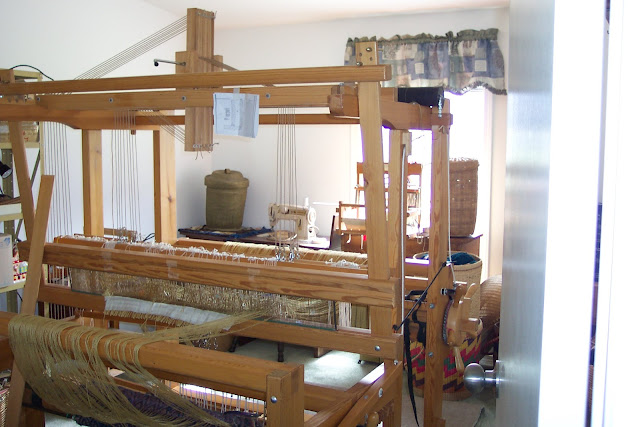 And of my reasons for choosing Windhover Weaving to designate them. 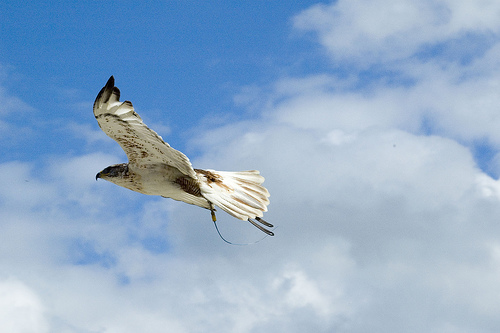 I caught this morning morning's minion,
kingdom of daylight's dauphin, dapple-dawn-drawn Falcon
in his riding of the rolling level underneath him, steady air, and striding
High there, how he hung upon the rein of a wimpling wing
in his ecstasy! then off, off forth on swing,
As a skate's heel sweeps smooth on a bow-bend: the hurl and gliding
rebuffed the big wind.  My heart in hiding
Stirred for a bird, - the achieve of ; the mastery of the thing!

Brute beauty, and valour and act, oh, air, pride, plume, here
Buckle! AND the fire that breaks from thee then, a billion
Times told lovelier, more dangerous, O my chevalier!

No wonder of it; sheer plod makes plough down sillion
Shine, and blue-bleak embers, ah my dear,
Fall, gall themselves, and gash gold-vermilion.

How incredibly beautifully the flight of the Windhover

and equally so the words Hopkins uses to describe it.

For more Words for the letter W click here to go to Mrs. Nesbitt's ABC Wednesday
with thanks to her, and her Wonderful helpers.
Posted by Hildred at 5:56 AM 14 comments:

A Beyond Layers Exercise 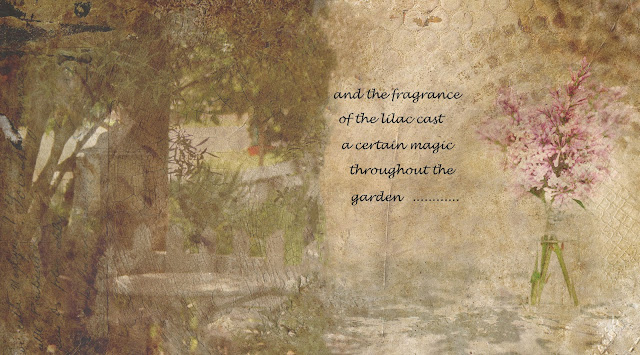 Kim's Lilac picture visits the garden.
Posted by Hildred at 10:39 AM 2 comments: