X is for Xanadu

In Xanadu did Kubla Khan
A stately pleasure-dome decree
Where Alph, the sacred river, ran
Through caverns measureless to man
Down to a sunless sea.
So twice five miles of fertile ground
With walls and towers were girdled round
And here were gardens bright with sinuous rills
Where blossomed many an incense-bearing tree,
And here with forests ancient as the hills,
Enfolding sunny spots of greenery
But oh! that deep romantic chasm which slanted
Down the green hill athwart a cedarn cover!
A savage place! as holy and enchanted
As e'er beneath a waning moon was haunted
By woman wailing for her demon-lover! 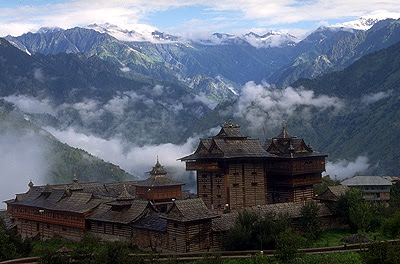 lKubla Khan is a poem by Samuel Taylor Coleridge, completed in 1797 and published in Christabel, Kubla Khan, and the Pains of Sleep in 1816. According to Coleridge's "Preface" to Kubla Khan, the poem was composed one night after he experienced an opium influenced dream after reading a work describing the Tartar king, Kublai Khan.. Upon waking, he set about writing lines of poetry that came to him from the dream until he was interrupted by an individual from Porlock. The poem could not be completed according to its original 200-300 line plan as the interruption caused him to forget the lines. Although the specific details of Coleridge's "Preface" are debatable, he most likely composed Kubla Khan during autumn 1797 and let it lay unpublished and kept to private readings until 1816 when, on the prompting by George Gordon Byron, it was made available to the public. - from Wikipedia
In modern times the poem inspired a 1980 romantic musical directed by Robert Greenwood and starring Olivia Newton John, Michael Beck and Gene Kelly.  XANADU is the Chinese province where Khan established his enchanted pleasure garden. 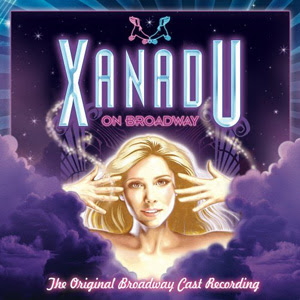 For other takes on the letter X, well X marks the spot where you should hop over to ABC Wednesday.
Posted by Hildred at 10:35 AM 15 comments:

A recent report from the Official Inspector of Rural Lines Instituted and Maintained by the Chinese Lantern Underground Railway.....

I am out in the garden deadheading roses and pushing aside this great vibrant growth in an attempt to clear the garden paths that were first such an important part of ny original penciled dream plan - beautiful artistic stepping stones (that I have since discovered cost an arm and a leg) winding through the garden, separating the delphinium from the bee balm and the roses from the lilies, - leading through scented plots of nicotiana and spidery cleome.

Alas, can you find them - these beautiful orderly pathways.... 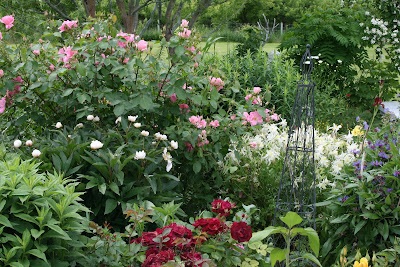 A marvelous garden for a cat's meandering, through shady undergrowth (chickweed)  and errant sweet alysum that tickles a cat's whiskers with delightful fragrance.

After a great deal of staking and pruning it is possible to corral the most vigorous and splendid plants, but the shoots that dismount from the Chinese Lantern Underground Railway Stations and push their way up through daisies and peonies and poppies and any other plant that takes their fancy are impossible to control.  They tower above the peonies and shade the Sweet William, and much as I love the beautiful orange lanterns they produce in the fall, a whole garden of them is just too much.  Their railway lines are long, straight white pencil thin roots - miles and miles of them that traverse the garden, back and forth, back and forth,  and sometimes crosswise.

It is a lethal Corporation, and one intent on establishing itself in the vicinity of anyone who innocently plants and tends this vagabond who goes under the name of Physalis.  Well organized too, as I am sure the Company maintains an army of Inspectors who ensure that the line runs efficiently and enthusiastically.

I am led to believe this by a small scrap of paper I found in the garden whereon it was noted, in tiny cramped handwriting, that the Line was being vandalized repeatedly by a bedraggled human who searches out the various stopping stations and destroys the lovely green shoots who depart the train and who want nothing more than peaceful co-existence with the other inhabitants of the garden, and to light up their brilliant orange lanterns when Fall comes, and with it the more sombre colours. 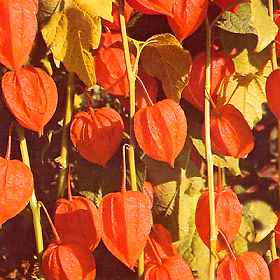 Should I feel guilty?
Posted by Hildred at 8:06 PM 4 comments: