In Advance of Spring Greening


Another dismal day to those who await the tender green of newly opened leaves; the mild fragrance of spring wafted on kindly breezes; the young bulbs displaying the treasured colours they have gathered from the winter earth whilst resting under a layer of snow.

In a conversation with our painterly daughter last night she was lamenting the advance of spring and I was awakened to the beauty of this pre-spring world that we are so anxious to leave behind. She is frantically trying to capture the colours that abound in this world, - colours that we are blind to in our anxiety to greet the greening of Spring.

From where I sit at breakfast I can see at the bottom of the mountain a beautiful patch of naples yellow, and below it the golden cast of the weeping willow as the sap rises out to the tips of the branches. As you look over the country side the tops of the willows are like great golden puff pillows, thrown carelessly over the spring landscape. 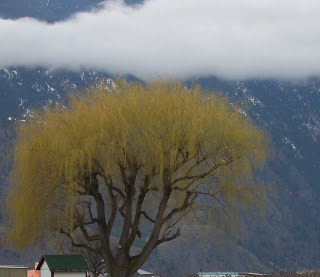 The fruit trees reflect the same sap rising, their colours varying from a warm rose to a deep and rusty red. 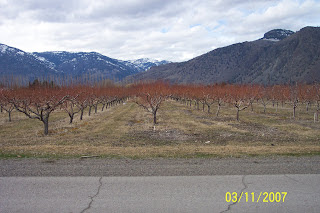 The red osier still retain their wild scarlet shades of


And the sumac sport bright candles....

This has been a soft and hazy day, with a light rain falling intermittently. The air lends a luminous quality to the colours of the day, and as it changes the colours change with it.

The vivid green moss clinging to a rock face had lost its vibrancy when I came back to photograph it half and hour later, and it's colour against the blue grey rock was more subtle. 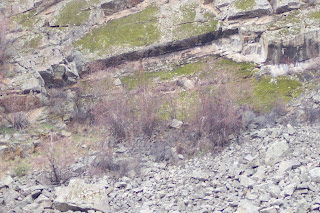 The small talus at the base reflected this steely shade, 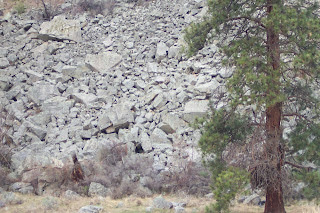 as does the sage that dots the hillside, with greeny overtones. 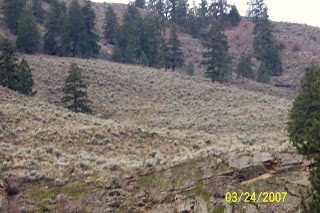 Tucked into the crevices of the mountains and emblazoned on their rock faces are the golds, the reds and roses, the steely greens and oranges that are found below in the valley, though more subdued. 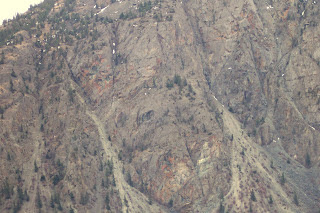 All of these wonderful colours are accented by the evergreens on hillside and within farm boundaries, surrounding the houses for shade and for windbreak .


Within these same yards the white skeletons of birch trees are haloed by a haze of rusty red falls, and the pussy willows are opening to scatter their pollen on anxious allergy sufferers! 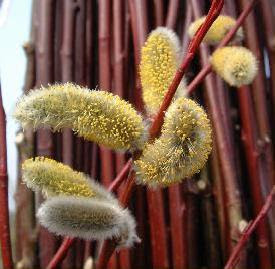 So little time to capture these colours to canvas, - already the early leaf buds swell pregnantly towards the burst of spring time green that will take precedence over all else.

Spring hesitates and flirts with those who await her coming, but as she vamps us with coy promises Mother Nature beguiles with another kind of beauty that is not overtly apparent except to the watchful eye.

Posted by Hildred at 8:30 AM No comments:

This morning I was listening to a new Ragtime CD I picked up in the grocery store the other day. One piece in particular caught my ear and sent my spirits dancing. It is called Black and White Rag, and was written by George Botsford. In my opinion there is nothing like Ragtime to lighten dark clouds and make the sun shine brightly! When Husband 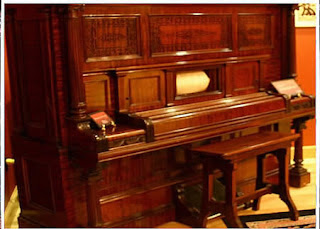 came in to lunch I played it for him, and he liked it, but criticized "the vamping in the bass". He was startled at his choice of words, - the term "vamping" had entered his mind unbidden and from some knowledge from the time when he played the piano "piano roll style".

How fortunate we are to have Google, - immediately looked it up to find that "vamping" is indeed the art of providing rhythm back-up, and that the chick-boom beat is particular to ragtime. Although the right hand melody of this performance had a wonderful lift, and was played at a dizzying speed Husband's great ear picked up a weakness in the bass. Now my ear is not as good as his, and so I will probably continue to enjoy The Black and White Rag with more gusto than he will.

Ragtime is medicinal in this household. It acts like an anti-depressant. The Brand we use by preference is the Scott Joplin product, but any Ragtime is joy to our hearts and causes twinkling toes and racing fingers.

Scott Joplin was not the originator of Ragtime. It was already played by many musicians, and other composers had already published piano rags before Joplin. But the piano rags of Scott Joplin were of such high quality that they were popular for decades. Many of the best-selling rolls for player-piano were ragtime, and this is where Husband learned to play many of the popular 1920's pieces that were in his repertoire, - Alexander's Ragtime Band, You made me Love You, The Dark Town Strutter's Ball, - and many more.

Scott Joplin, whose ragtime is classified as "Classical Ragtime" and who was first introduced to me by Husband's Sister. She played his music with great technique and marvelous abandonment. When she sent me a book of his complete music I immediately started practising - much more slowly than she played, but gradually with increasing skill. This book is never far from the piano, and always available as a pick-me-up when we begin to feel weak and aged!!!! 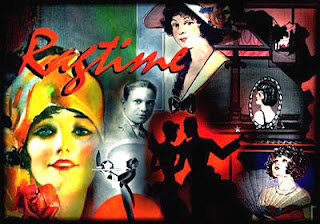 For a while, beginning in the twenties when jazz was the genre of the day, Ragtime was less popular, but it continued to be performed and recorded and had a major influence on early jazz greats. In the 1940's there was a slow revival until in 1973 the movie "The Sting" reintroduced ragtime to the general public and it has become once again popular with musicians and audiences.(ah, the music and the men in The Sting - Solace, The Entertainer, Robert Redford and Paul Newman (sigh) Ragtime has also "gained respect and recognition as an art that produced works of true genius." And it's so much fun!!!!

Posted by Hildred at 7:56 PM No comments:

Labels: Ragtime
Newer Posts Older Posts Home
Subscribe to: Posts (Atom)
"Thou knowest not what a day may bring forth." —Proverbs