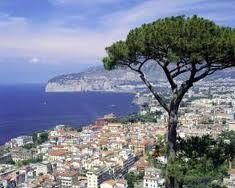 The Bay of Naples, home of fabulous pastries and desserts
Elegant Neapolitans or The Soda Cracker Dessert 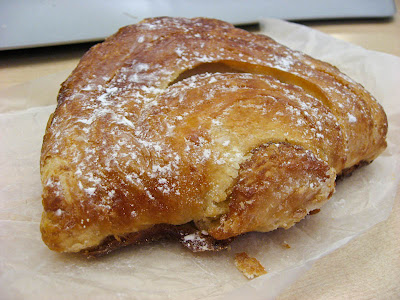 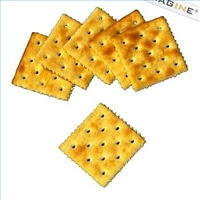 .....the dessert de celebre in this pastoral valley half a world away from Naples where Neapolitans were first concocted by the Little Nuns of the convento Trentatre on the Via Pisanelli. 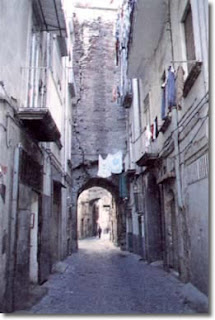 Is there to be a wedding?

Nothing deters the ladies who cater for charity in the Similkameen from providing this exquisite dessert that never palls and is always welcomed.

Sometimes making the Soda Cracker dessert is a group effort, but Thursday morning in my humble kitchen and with humble ingredients I set about making a nine by thirteen glass* (important) pan of this delicious concoction for a Saturday wedding reception.

I assembled the soda crackers, the quart of milk, two large packages of instant pudding mix and a large tub of Cool Whip.

I put on a pot of homemade soup to warm while Charles hung for fifteen minutes before lunch (this is another story altogether only mentioned here in reference to time!!)

I combined the quart of milk and the two large packages of vanilla instant pudding, whisking them together for two minutes until the mixture is of pudding like consistency.

I gave the container of Cool Whip a little stir to add some air and fluffiness.

Then I began the assembly, covering the bottom of the glass* pan with rows of unsalted soda crackers.

I eyed the pudding mix, dividing it in three and spread one third of it over the crackers, followed by one third of the tub of Cool Whip.  The I started again with soda crackers, pudding and cool whip, three times in all.

I covered the pan with Saran Wrap and slid it into the fridge where it has been sitting for forty-eight hours and magically morphing into the most delectable Neapolitan dessert - all ready to be cut into squares, topped with a fruit sauce and served on fine china with sterling silver dessert forks or paper plates and plastic spoons - depending upon the occasion.

It goes without saying that this dessert has unending possibilities.

Would you like lemon with a raspberry sauce, chocolate with blackberries or cherries, vanilla with an almond peach sauce, or a lovely apricot?

Soda crackers have magical qualities, - they get sweeter as you chew them and over a two day period in the fridge  become a fine Italian pastry - amazing!

I finished my magic-making just as Charles came for lunch - speedy alchemy....
Posted by Hildred at 9:30 AM 5 comments:

August skies in the Similkameen 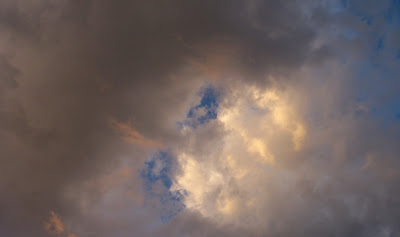 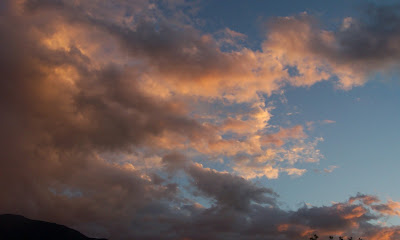 For more exciting skies from all around the world visit Skywatch and enjoy the efforts of the people who maintain this wonderful meme and those who take part in it.
Posted by Hildred at 11:18 AM 22 comments:

F is for Figs, Fig trees and Fig Newtons, among other amazing things 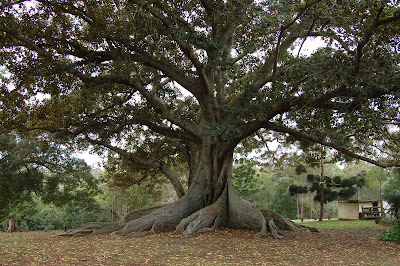 A large Fig tree at Moreton Bay near Brisbane 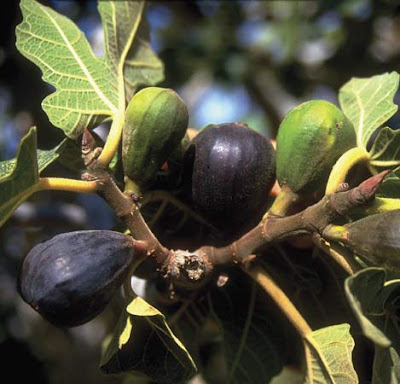 and the figs that grow on it
Fig Newtons are more ancient than you might think.  It was probably the early Egyptians 'who invented the fig roll in its early form as a confection of preserved figs wrapped in a flour-based dough' and traded by traveling sailors and explorers.

Fig rolls were the ideal answer for early physicians who believed that most illnesses were related to digestion problems and recommended a daily intake of biscuits and fruit.

Charles M. Roser was the modern cookie maker who boosted the Fig Newton to its place of glory.

James Henry Mitchell invented a machine in 1891 that worked like a funnel within a funnel;  the inside funnel supplied jam, while the outside funnel pumped out the dough, producing an endless length of filled cookie that was then cut into smaller pieces.

If you yearn to make your own Fig Newtons here is a handy recipe! 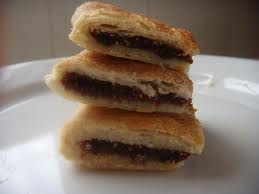 Make the dough by combining 3 cups of flour, 1/2 cup of sugar, 1/2 tsp of salt. 3/4 tsp of baking powder and 1/2 tsp of cinnamon with 1 1/2 sticks of butter cut into pieces.  Whisk together 3 eggs and add to the dough.
Refrigerate for a couple of hours while you make the filling.  Well, it won't take you a couple of hours to make the filling, but fit it in sometime while the dough is resting.....

Combine in a saucepan and cook over medium heat until all the liquid is absorbed and the mixture is thick, stirring occasionally while cooking..... 2 cups of chopped figs, 1 cup of orange juice, 1 cup of apple juice, 1/2 tsp cinnamon, 4 tbsp of sugar and 1 tsp of orange peal.  Let the filling cool slightly then puree until smooth, and refrigerate.

Now, when you are ready to bake, heat the oven to 375F and make an egg wash by whisking an egg with 2 tsp of water.

Divide the dough into 3 equal parts and on a lightly floured surface roll out each portion into a rectangle about 1/8 inch thick (one piece at a time)  Cut the dough lengthwise into strips about 2 1/2 inches wide.  Paint around the edges of each strip with egg wash and spoon the fig filling down the centre of the strip, then fold the dough over to enclose the filling.  Place the tubes, seam side down on a greased cookie sheet - or on parchment paper (much easier) and press down lightly to flatten.

Brush the newtons with the egg wash and bake until light golden brown (about 15 minutes).  When they are cool cut with a sharp knife into appropriate lengths, depending upon whether they are destined for the lunch box or a fancy tea.....

If you want to learn more about the letter F click here to go to ABC Wednesday, with thanks to those who maintain this informative and entertaining meme.
Posted by Hildred at 9:41 AM 27 comments: