Random, and sometimes frivolous thoughts, whilst listening to Bruckner

A week has passed since my adventure with the spot of ice and the orthopedic surgeon - I should be so lucky that he should be the one on emergency duty when I landed at the hospital, and have time to do the surgery on my wrist that very same day so that by midnight I was at home in my own bed!!!

I am now able to type, carefully, and play the piano, lightly, but my wrist is still irritable throughout the night, having trouble finding a restful place on the supporting pillow that allows it to pass the sleeping hours without pain. Hence my indolence during the day.

I spent the mid-day hours listening to Bruckner's 9th Symphony in D Minor as played by the Berlin Philharmoniker - live on its Digital concert hall.  I have not one moment's regret for the small amount of change it costs for a Season's ticket, paid monthly, especially when I consider the Archives that are available any time of the day or night that the desire for music overcomes one.

As I listened I watched as well, the trickle of people wandering back from intermission as the Cellos take their place before the orchestra reassembles for the anticipatory tuning up.

The conductor, my old friend Zetin Metha, somewhat greyer and his hair more subdued than when he was with the Three Tenors, but still with the old fire and charm even though his walk is more sedate as he appears to enthusiastic clapping.

The music begins and the musicians are all engrossed!! This is not the first time I have noticed how the clarinetist's eyebrows rise and fall in response to his emotional musical breaths. Nobody appears nonchalant, I think, as they whirl along with the music, -  or even in the quiet, intense parts.

Nor is it the first time I have noticed the sweetness of the violins in these quiet passages, and how lovely they are in contrast to the passion of the horns and trumpets.

I watch the distinguished flautist and wonder what he is like at home, - is he jolly?  Does he like his eggs soft boiled and his toast just so?  Is he just a mortal playing the music of fairyland, or is he Pan's cousin personified?

I remark to myself on the discreet pearl button earrings that the woman in the orchestra wear  and regret that I have lost one of my mother's small pearl earrings.

I see the surrounding instruments reflected on one of the very large horns,  making a rainbow on its silver surface.  I watch to catch sight of it again, but we are near the end of the program and I do not see it again.  In past times I would have asked Charles what the instrument would be, but now I have only to guess.  A sousaphone perhaps, do they have sousaphones in classical orchestras, or only in marching bands?

The concert is over and I go to the kitchen for a bowl of soup, bemused and still ringing with the wonderful music, full of gratitude.....and as I said, random and sometimes frivolous thoughts.
Posted by Hildred at 3:41 PM 9 comments:

The letter is A

The letter is A and we are off again on an alphabetical romp.

and I have slipped on the ice and shattered my right wrist so am using the poke and peck method for this small contribution to ABC Wednesday, and if you would like to see more click here to visit the site that Roger and Denise and all helpers maintain for fun and pleasure and All sorts of information. 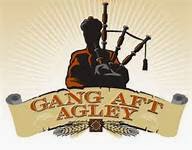