Out in the garden this evening to try to lend a little support to the white delphiniums which were growing so tall and stately before the last two days of rain. but are now bent every which way, sadly and most distressed...... 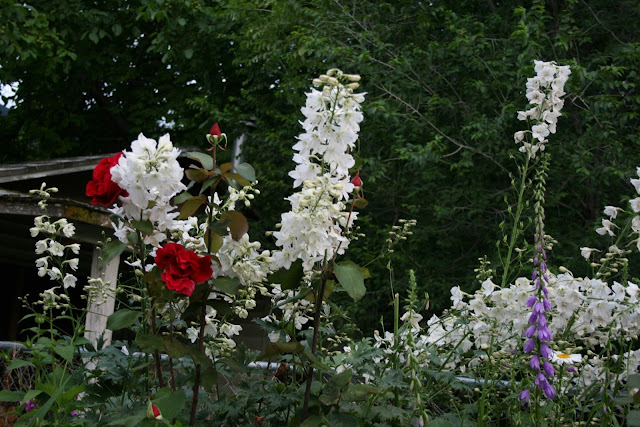 I brought a few of the most unhappy ones into the house with great bunches of Blaze roses, which are also heavy with rain and blossom, and they make a magnificent bouquet. 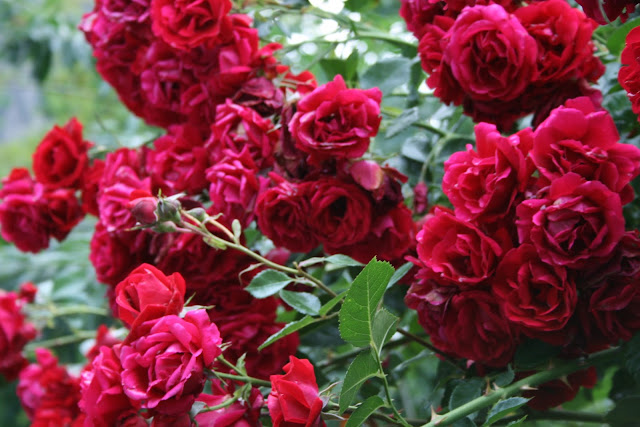 It was good to get out into the freshly washed air.  If the rain had been heavier I would have said 'scrubbed' but it has been a gentle rain, - persistent but kinder to the cherry crop
than a sudden violent downpour.
The skies are lighter, - it is even possible to see a few cloud formations
rather than that dismal pewter lid on the world.
I have spent the last two days sorting through pictures - part of my preparation to
gather together a pictorial story of Charles' life, - and reminiscing!  Our eldest daughter came
in as I was going through the many boxes and we got lost in memories
and warm stories and laughter.
It was such a rich and varied time - he was not a dull man, and life was never boring;
not for me or the children.
While I was outside I picked all the dead daylily blooms from along
the fence and brought them in to put with my daily/daylily stash that is
soaking in a bowl, waiting for the sunshine so that I can put
the whole wonderful mixture in glass jars with some mordanted wool
and see what lovely soft shade it dyes.
The weatherman promises sun for tomorrow....
we shall see.
A new book to read in bed tonight; in the mail today
Alexander McCall Smith's latest -
'Trains and Lovers'
The New York Times says in review "McCall Smith's generous writing
and dry humor, his gentleness and humanity, and his ability to evoke a place and
a set of characters without caricature or condescension
have endeared his books to readers", and I can hardly wait.
An early bedtime.....
Posted by Hildred at 9:41 PM 5 comments:

W is the letter for the week

Wisteria is the choice of flower 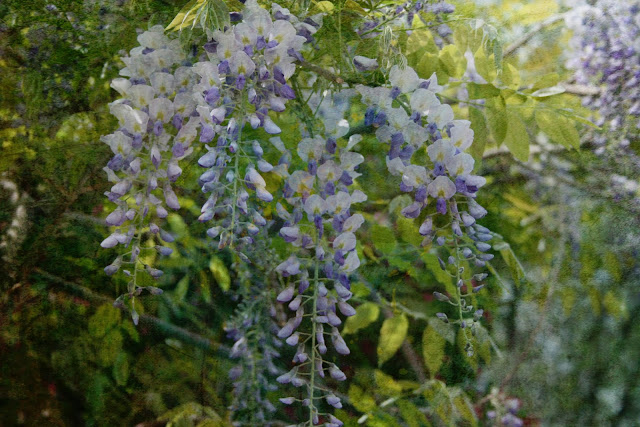 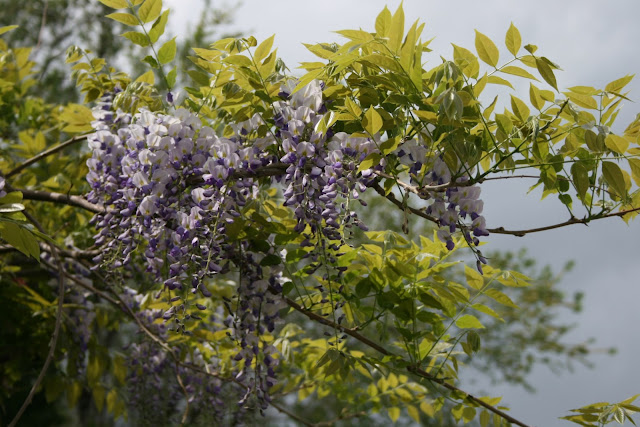 pictures taken in May, 2011 at the big house
below our hill garden
Wildly exotic and tenderly sumptuous, these flowers
grow on a vine that is so strong it will bend a steel
pergoda out of shape.
I planted a small new vine against the back garden fence
and hope to enjoy its beautiful blooms before
it takes the fence down!!!
For more Ws visit here at ABC Wednesday, with
thanks to all the wonderful ones who
maintain this great meme.