Amaryllis 2 - even more beautiful and delicate than Amaryllis 1. Almost translucent and an enchanting shade that I cannot quite put a name to. 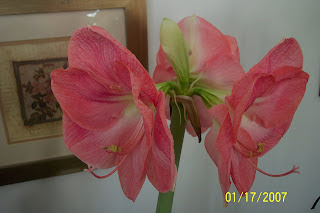 I resisted, - but I am going to town tomorrow as well, to resume our Ladies' Thursday Lunch Date!

Here it is tomorrow, and it has been snowing since midnight. Lovely Christmas Eve snow, - soft and tender as it falls, but definitely has lost its way timewise!!!

A picture of a little sparrow at the kitchen window bird feeder. 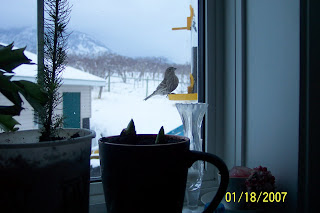 The troop of quail were feathering along in the snow, hunting for the seeds that lay under it, on the ice. The wiser Contingent gathered around the bottom of the bird feeder in the apple tree and snaffled the seed that the small birds spill.

Down in the meadow a squadron of large, black ravens circled the sky, landing and pouncing on the left overs from the recent butchering. The smaller birds pay them no mind as the ravens jump up and down in ecstasy, - dark exclamation marks on the white snow.
Posted by Hildred at 10:08 PM 1 comment:

A day in the loom room

Good for the soul, but hard on the back.

Remember the green tea towel? Yesterday I finished it, and as I did a great longing came over me, - a longing not to have to do anything more on that particular warp that had eight weights hanging from the back and required constant misting and flaxing to keep it in proper weaving shape.

Whilst in this state of longing and reckless abandon my eyes fell on the scissors, and before one could say "Jack Robinson" (as if he had anything to do with it) I was snipping at the warp, great swathes at a time. The unwoven warp fell away and slipped through the heddles, and the woven tea towels relaxed their grip on the front beam and sighed mightly at the relief they felt at giving up the strain of remaining taut.

What a wonderful feeling of liberty and independance pervaded the room. This is bound to happen when warps grow old and emit a great feeling of anxiety that wafts through the loom room door as you pass hurriedly down the hallway. The chains that warp entwined me with were gone, and in my mind arose great visions of the gorgeous, exotic things I was now free to weave....

Today I ordered some black silk! 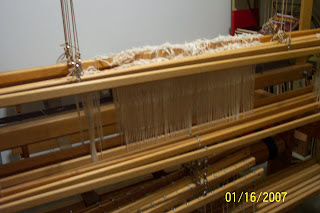 Once that was done it was time to minister to the loom, - to pick up all the nuts and bolts that had fallen from unused lamms and were hiding under the treadles. To retie the belts on the sectional beam and replace all the withered elastic bands that keep them in place - so long had they been there since the warp was first put on, fresh and full of promise. To dust and vacuum, and promise the loom the joys of a new and gorgeous warp to cover its nakedness! 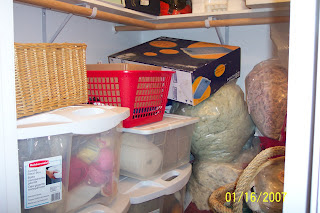 A studied survey of the stash stored in plastic containers in the loom room closet revealed a little of this, a little of that, but nothing that excited my imagination. Hence the call for black silk, and the hurried retrieval of the ancient weaving book where all the plans are recorded. Probably the most exciting part of any project, - dreaming dreams and engaging the brain in the math of the warp and weft.

Tomorrow I will hem the tea towels, apologize for such a long birthing, and pass them on as the housewarming gift they were meant 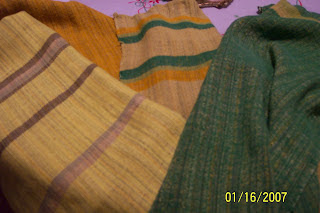 O Winter! frozen pulse and heart of fire,
What loss is theirs who from thy kingdom turn
Dismayed, and think thy snow a sculptured urn
Of death! Far sooner in midsummer tire
The streams than under ice. June could not hire
Her roses to forego the strength they learn
In sleeping on thy breast.
- Helen Hunt Jackson, A Calendar of Sonnets: January

HERE IS A POIGNANT LITTLE POEM WHICH I THINK IS TELLING US THAT NOTHING GOOD COMES WITHOUT HARDSHIP, - THAT BEAUTY IS BORN OF SUFFERING, THAT FOR HEAVENS SAKES, IF WE WANT THE ROSES OF JUNE WE'D BETTER APPRECIATE THE SNOWS OF JANUARY.

That's all very well, but this snow has been around since November, and we've put up with it long enough!!!

I scan the weather forecast for some sign of encouragement, but there is nothing in the future except more cold weather.

When Spring does decide to favour us, about March or April, she dallies on her way, waving one day from the top of a mountain, and then disappearing from view and sending a storm in her stead. Why am I even thinking so far ahead???

Well, in my heart of hearts I know why. I am drifting through January, oblivious to the resolve that in my imagination saw the warp on my loom finally finished, and a beautiful silk warp in its place. 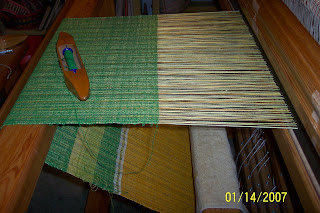 One can easily see the length of warp that is left on the loom, and the state of the green linen tea towel that I have to stop and minister to with a flax solution to keep it from shredding..... It is five of a series of six, so the end is in sight, but the days are going by, one by one, while I dither and dream. 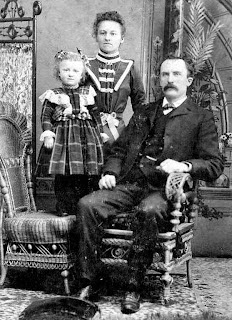 to family members, but it is a desultory occupation, and my enthusiasm is dampened by the sheer numbers of snaps we have taken, or have had sent to us. Wonderful to have, but where, oh where, is the particular one you are looking for!!!

Am I suffering enough to deserve those roses of June? Not yet, - not yet!

They name is Blog!!!

Posted by Hildred at 7:32 PM No comments:

Labels: procrastination
Newer Posts Older Posts Home
Subscribe to: Posts (Atom)
"Thou knowest not what a day may bring forth." —Proverbs