When morning gilds the sky..... 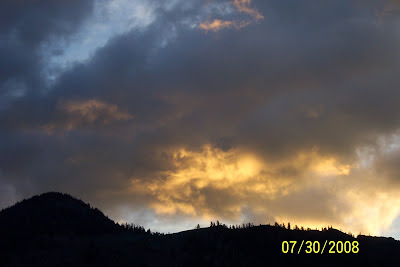 and the tops of the hills are touched with light 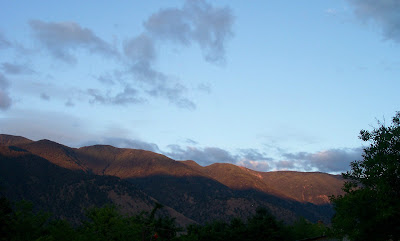 Mornings at five, and all's right with the world.

In a little while the sun shines, the breeze is cool and refreshing, the day passes, and the evening bids a gentle farewell.......... 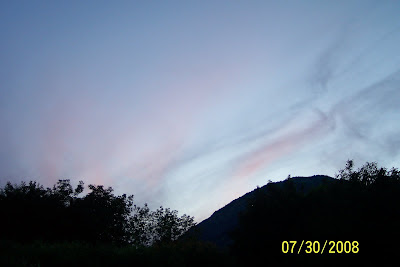 Post Script.....
And the night passed, and morning came again.

Somebody up there was making beds (is there a housekeeping angel in charge) - shook out the pillows too vigorously and scattered the sky with goose feathers. 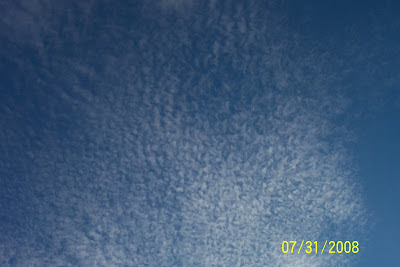 Posted by Hildred at 8:33 PM No comments:

It is early in the morning.

I have awakened about five, done the usual morning ablutions, slipped on some clothes, and am met at the bedroom door by the little dog, with his legs crossed. So I make a detour around by the coffee pot and punch the start button, slip the leash over the little dog's eager head, and off we go.

The sky has a faint rosy blush, but it will be another hour or so before the sun stretches up over the mountain tops. We go leisurely on this little business trip, stopping here and there to accomplish the purpose of the venture. The little dog is full of energy this morning, and proceeds me down the road, right to the bottom where the lane turns left to the big house. He doesn't see much, but he investigates lots until I have said 'time to go back' and then he is anxious to make a bee line for home.

We are going at a nice clip, with the orchard to our right. My eyes are on the sky and the cloud formations, when suddenly I feel a presence. I look into the orchard, and there, at the edge of the apple trees, is one of the baby skunks, stopped on his journey across the road as if at a red light. Eyeing us cautiously, very polite, but with his tail raised like a warning flag. Little dog does not see, and apparently doesn't sense the little one's presence.

I say a quiet good morning, and we quicken our pace somewhat. When I have gone a little way I turn and look and his little bushy tail is just disappearing into the neighbour's lumber pile.

This was not the first time we had met. Late in the evening, a few nights before, Callie the cat, Caspar and I were out on the same mission. We stopped at the end of the road while I admired Jupiter, and the animals clustered around my feet. I looked down and suddenly realized that there were more animals there than I had started out with, and the little strange one was a black shadow with a gleaming white stripe. It was a friendly little conclave, but I wasn't about to chance one of the domestic animals causing any stress for this little country version of Pepe le Pew.

We withdrew quietly, with small goodnight murmurs and hurried footsteps. You will notice that I am mighty polite to this little nocturnal neighbour.....
Posted by Hildred at 7:48 PM No comments: