My DIL came early to pick me up for our monthly day out in Penticton.
The days of autumn glory and magic have passed.
Winter has made itself known, and the November days
are somber, sober and full of sad memories.
I thought that the camera would not be needed - but no!
DIL had come from Summerland
and passed through a mist-ical wonderland on her way .

Why would I not have known?  Time passes.
The world goes on about it's business of beautifying the earth,
no matter what the season, and so off we went,
camera tucked into the big bag containing all the other things
that I deem essential.....

Here is a pictorial record of our journey..... 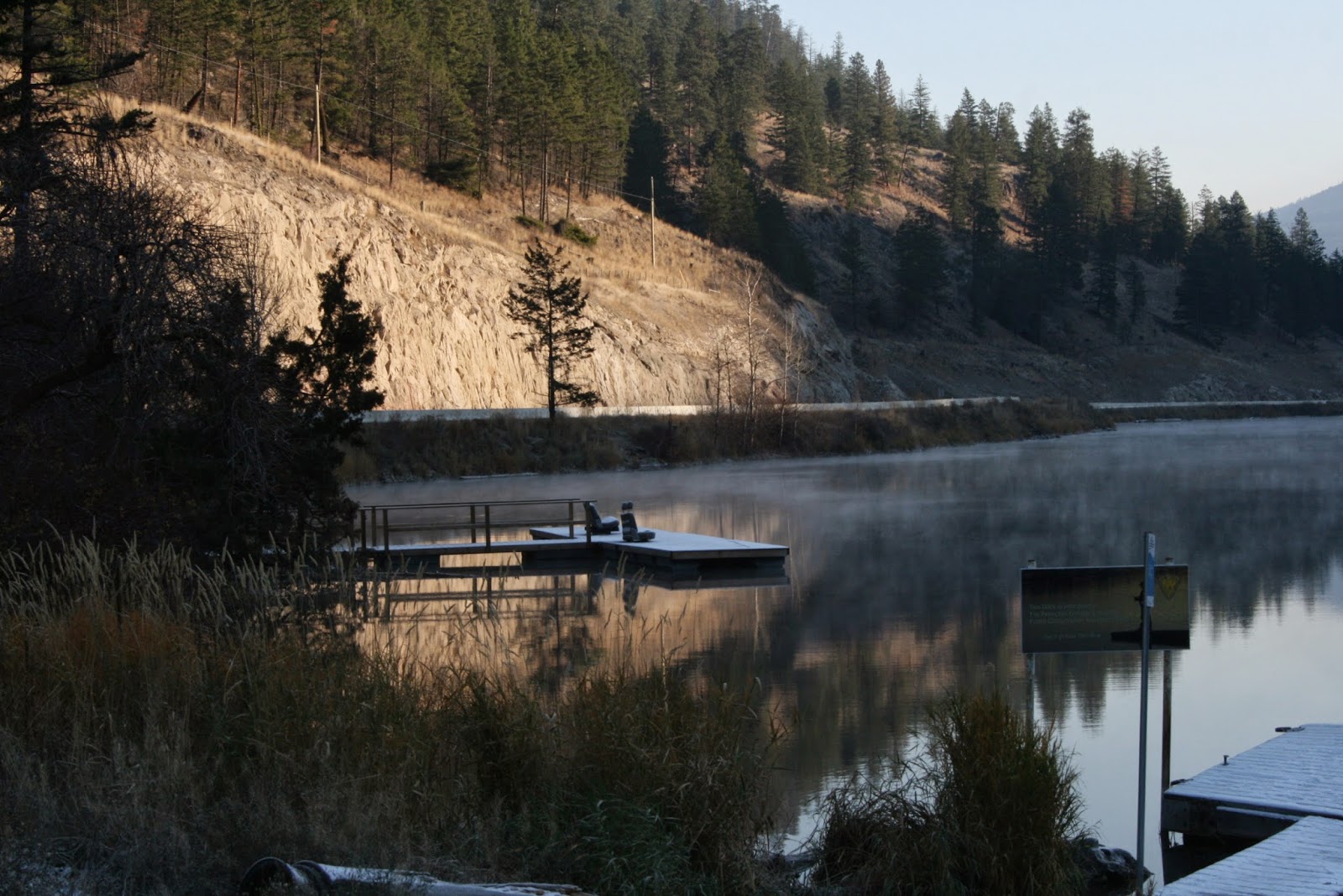 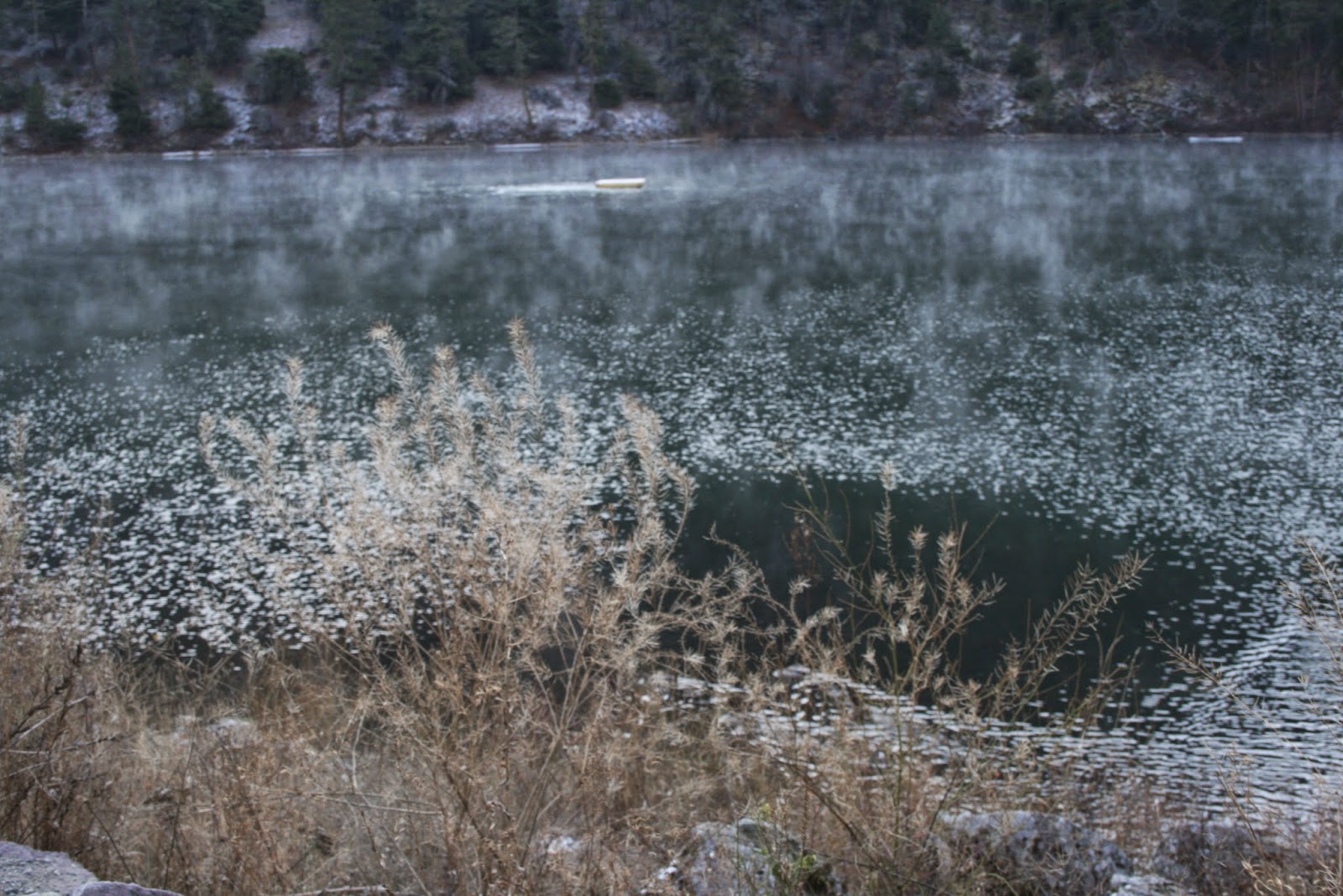 There is calm water around the wharves but just
off shore the steamy mist rises
and the grasses are delicately gilded. 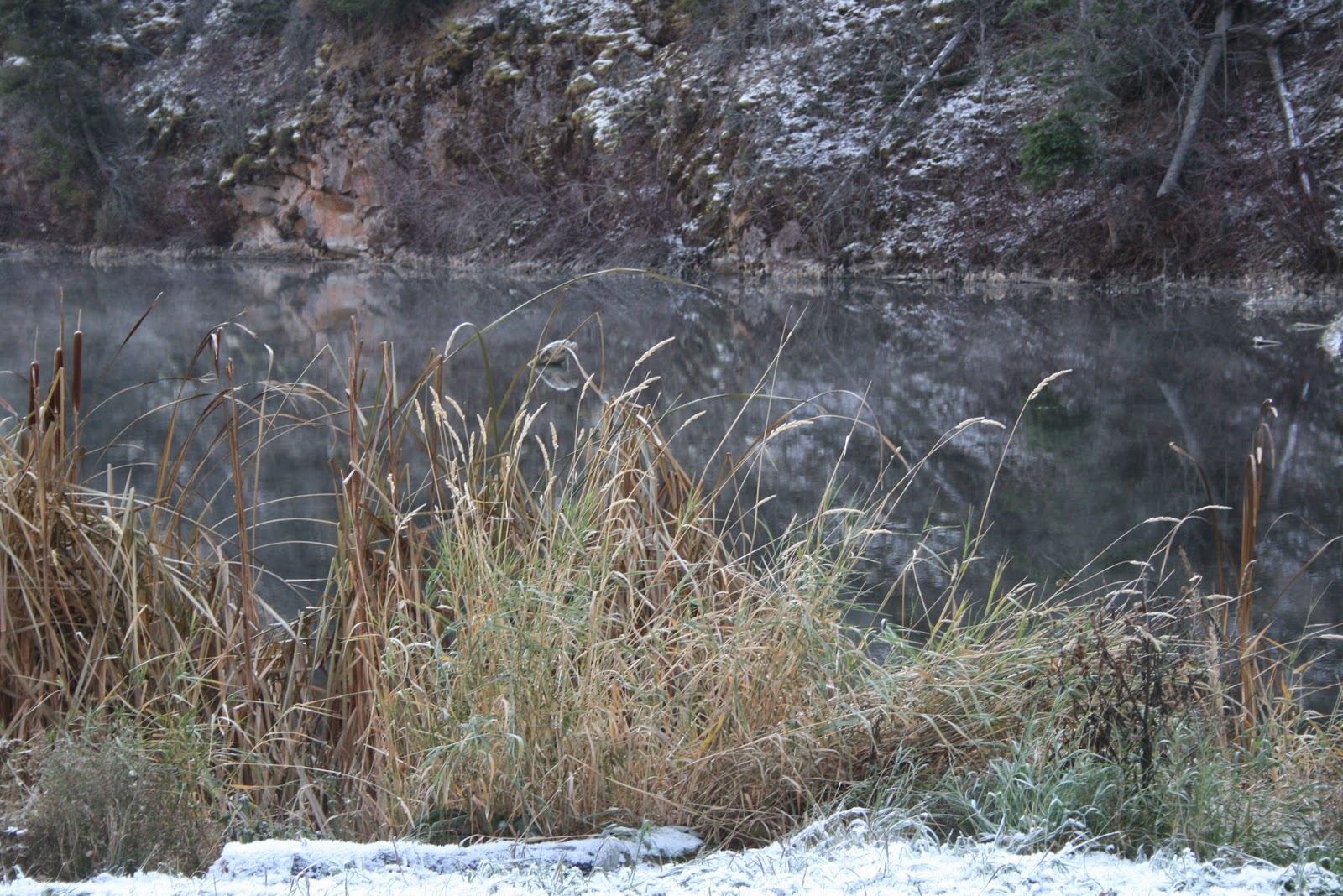 This is a mountain lake and the rocks rise directly out of the water. 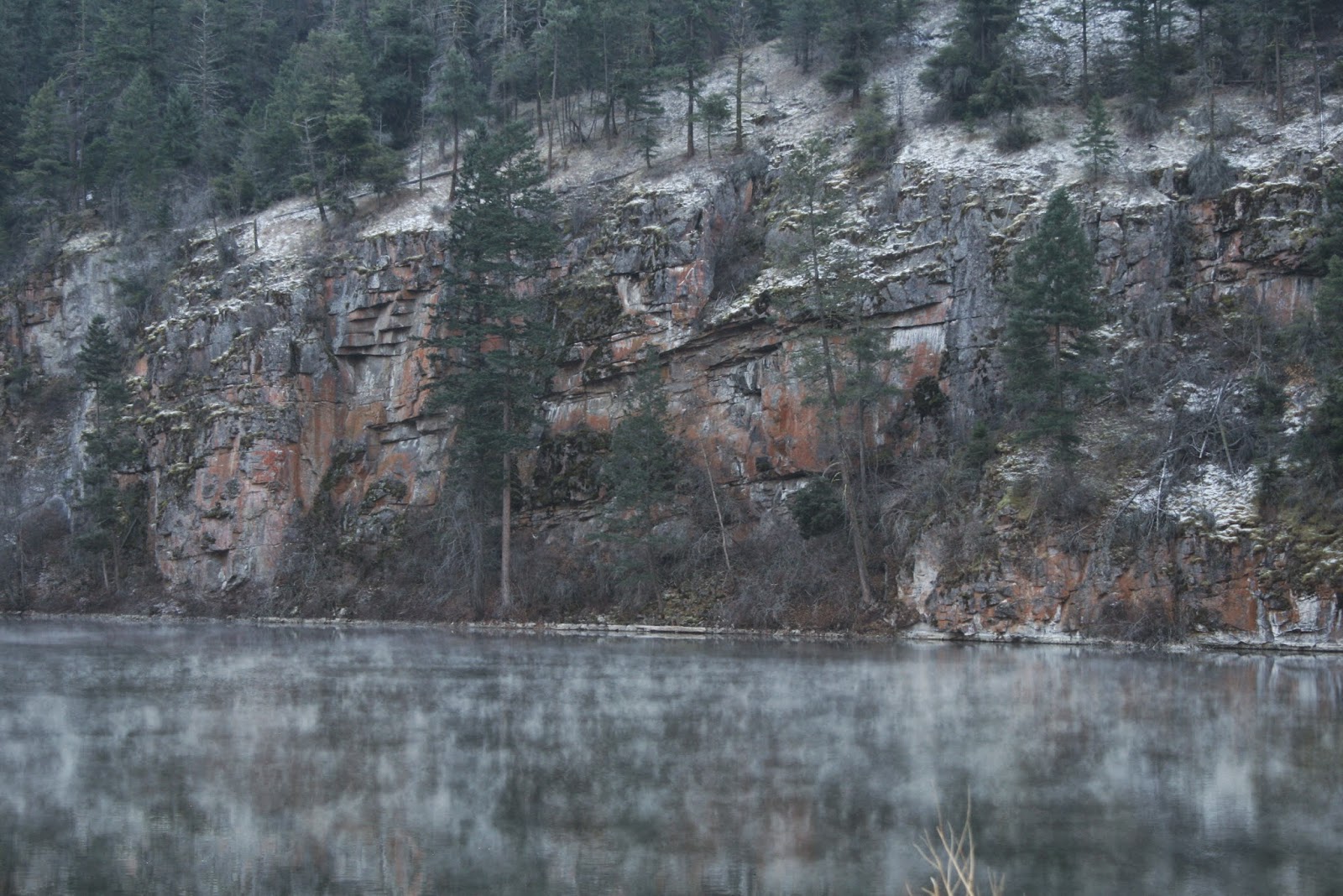 The reflection of the painterly bank is subdued by the rising mists, 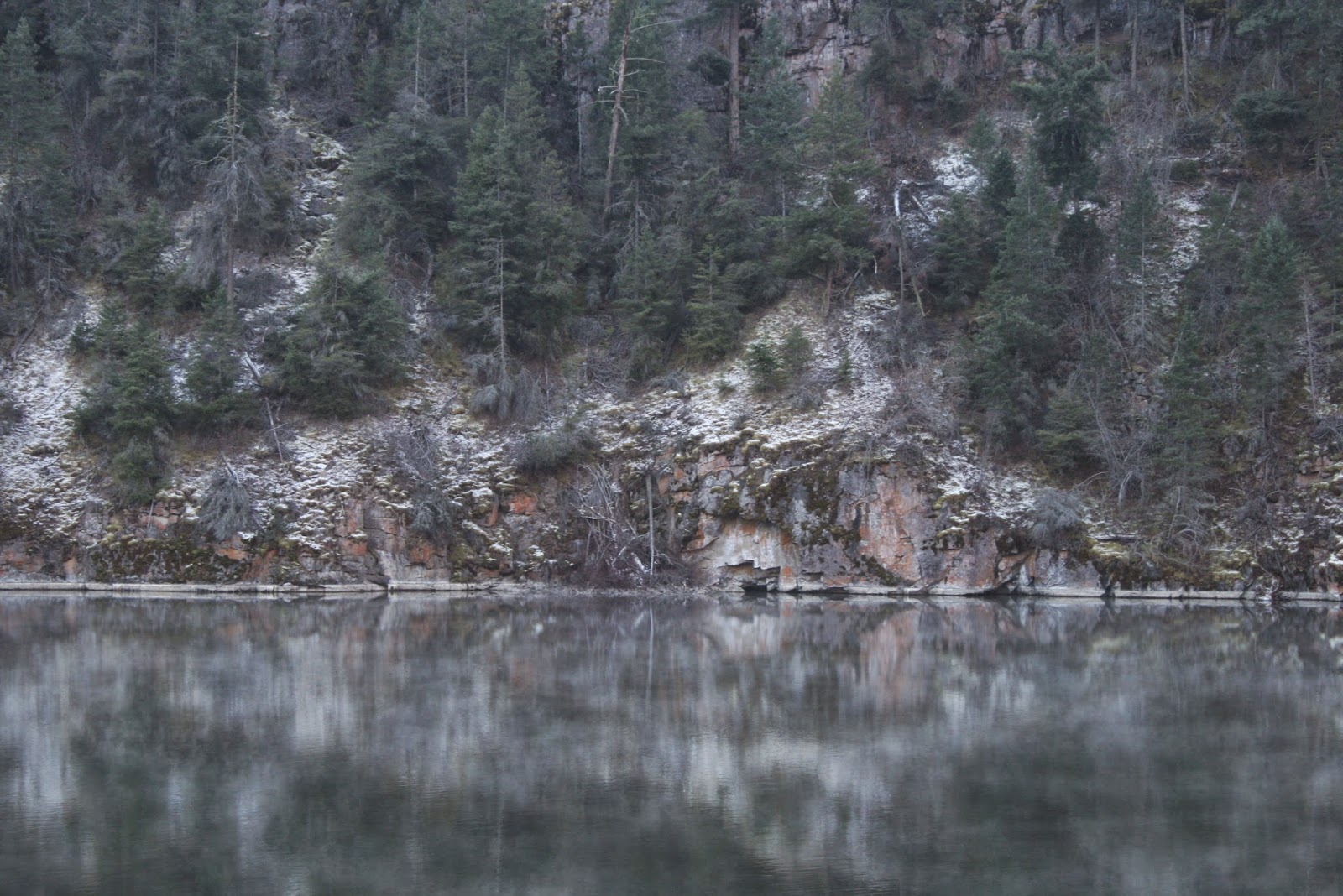 and here, where the highway turns toward the end of the lake, one
could imagine all sorts of images in the colours and the formation of the rocks.
Be there dragons in yon hills???? 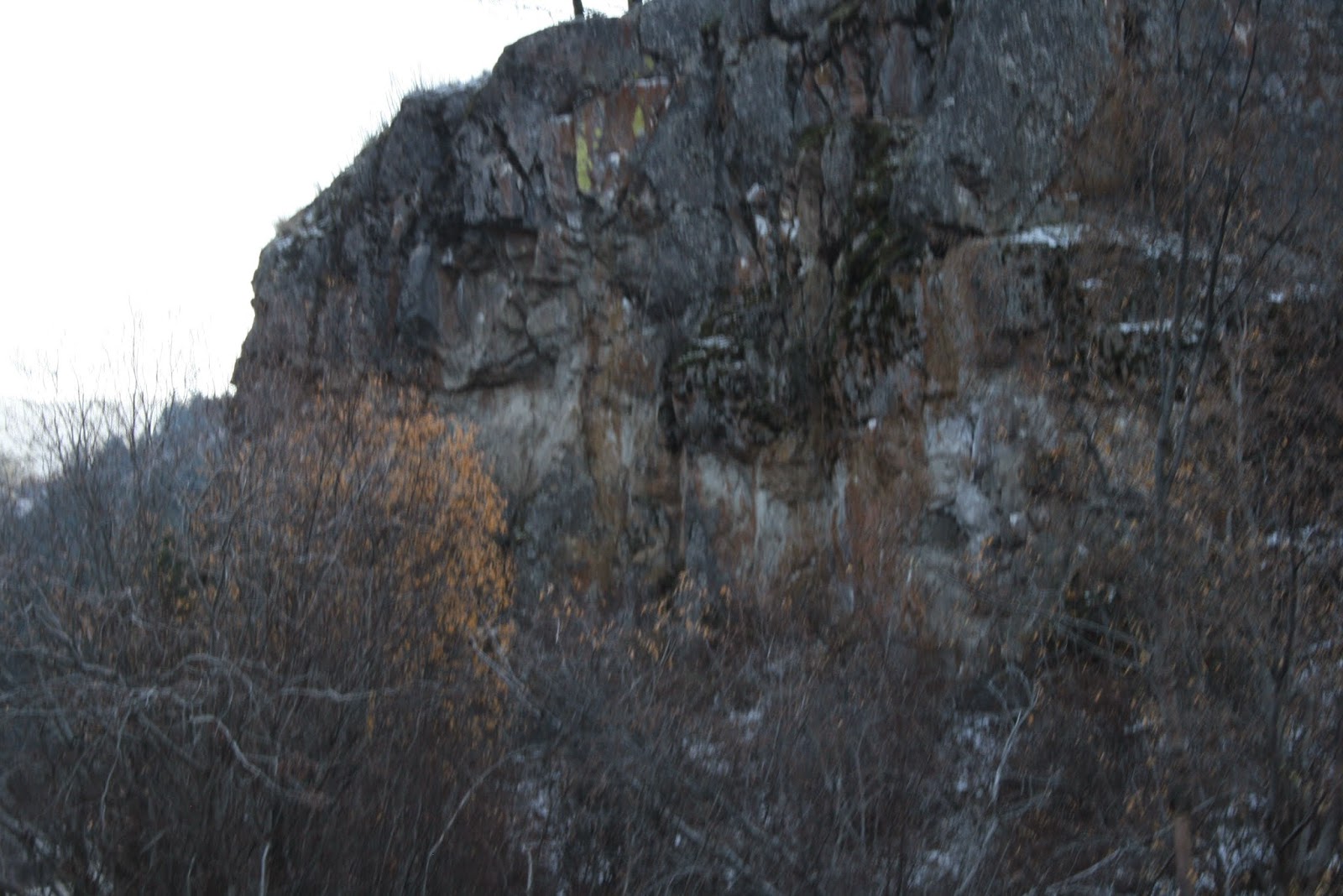 We pass the golf course where the sun lays long shadows over the links, and
one lone trees hangs on to its dying leaves 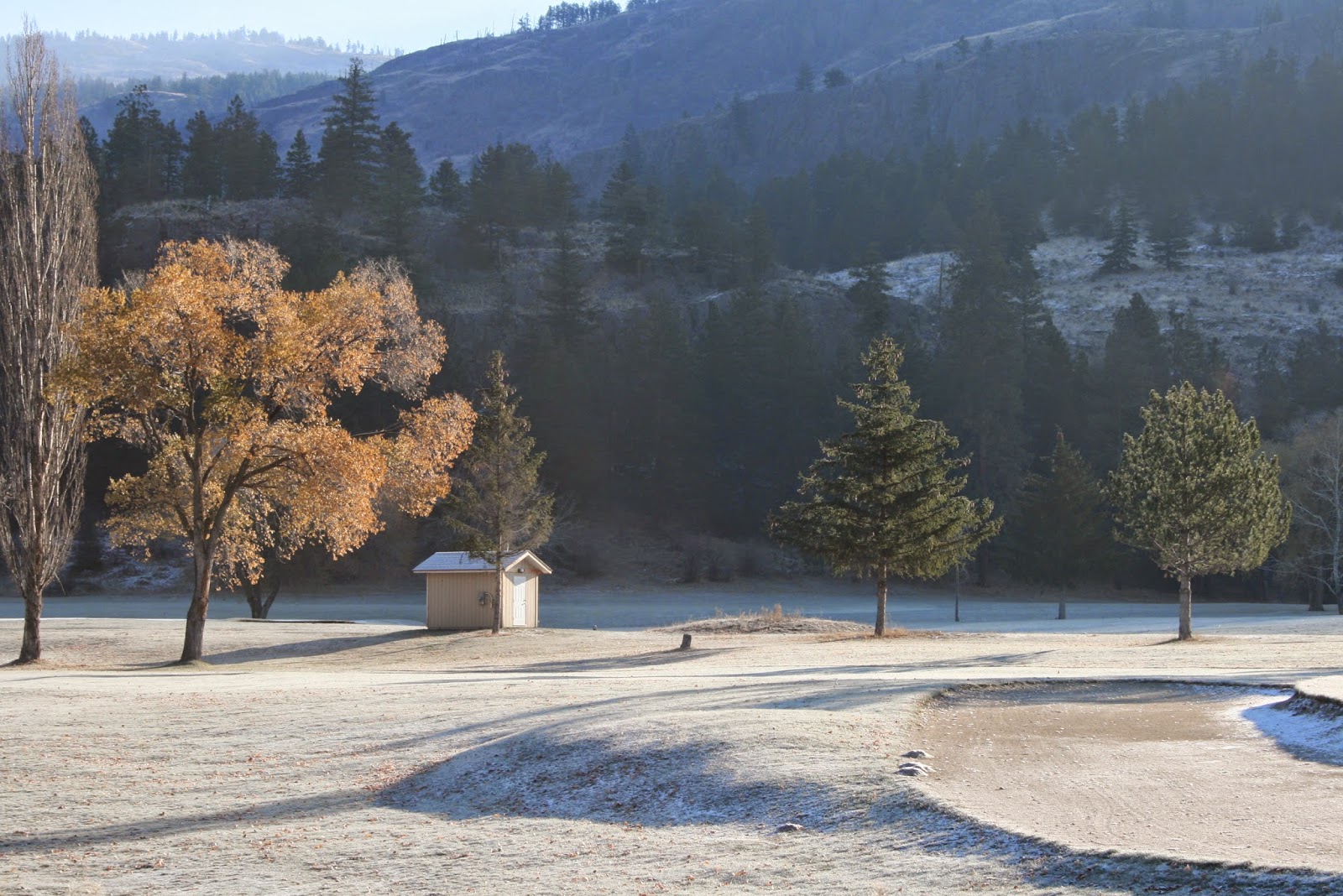 As we start our descent into the Okanagan Valley by way of Roadhouse Hill
we come across a small waterfall, hardly noticeable in the summer
but here, in November, when it gets no sun, it comes into
its icy glory and we admire its pristine beauty.

Last year some merry elf somehow added pink colouring
to the water before it froze,
and it was rather a garish waterfall!!
Not what I prefer! 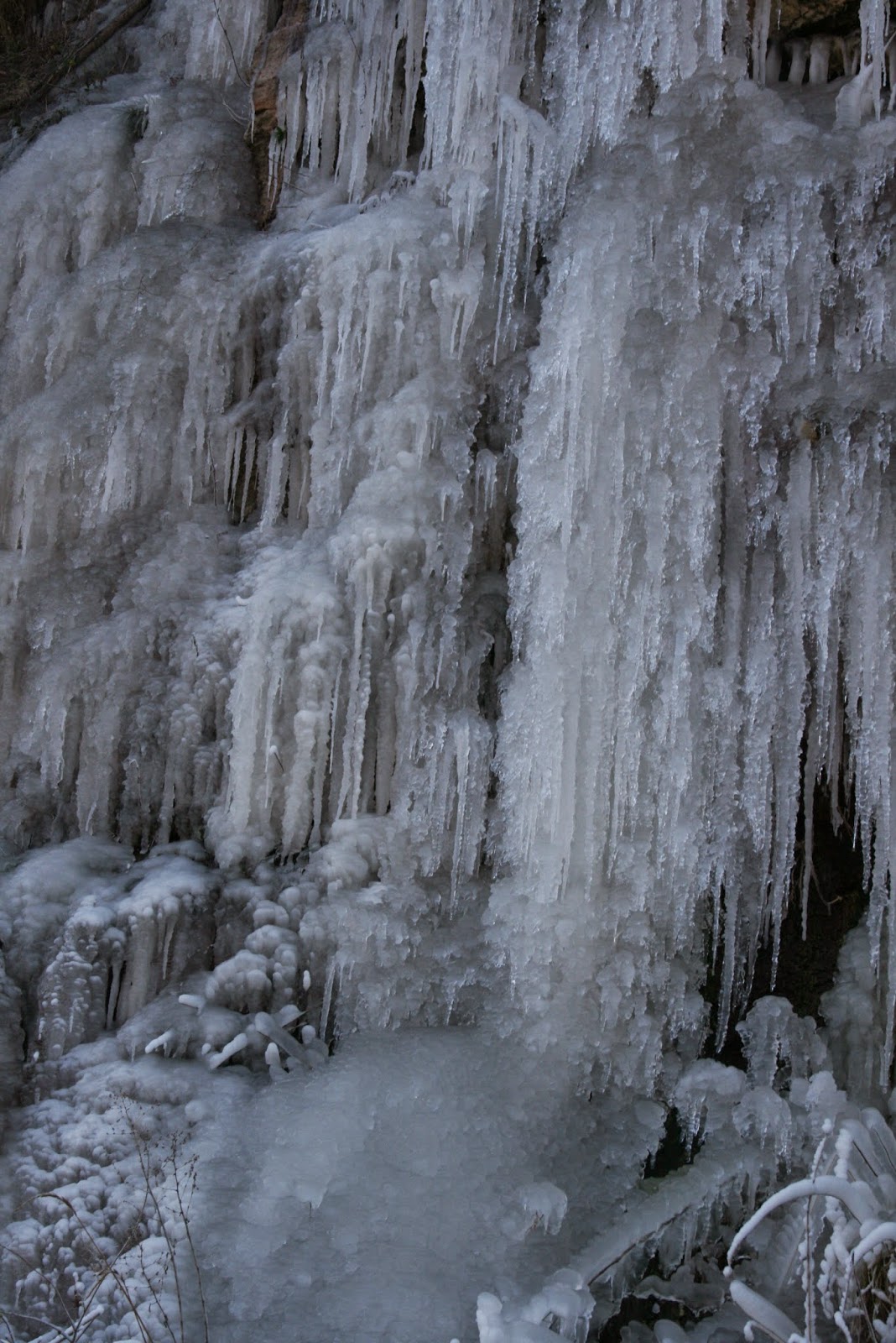 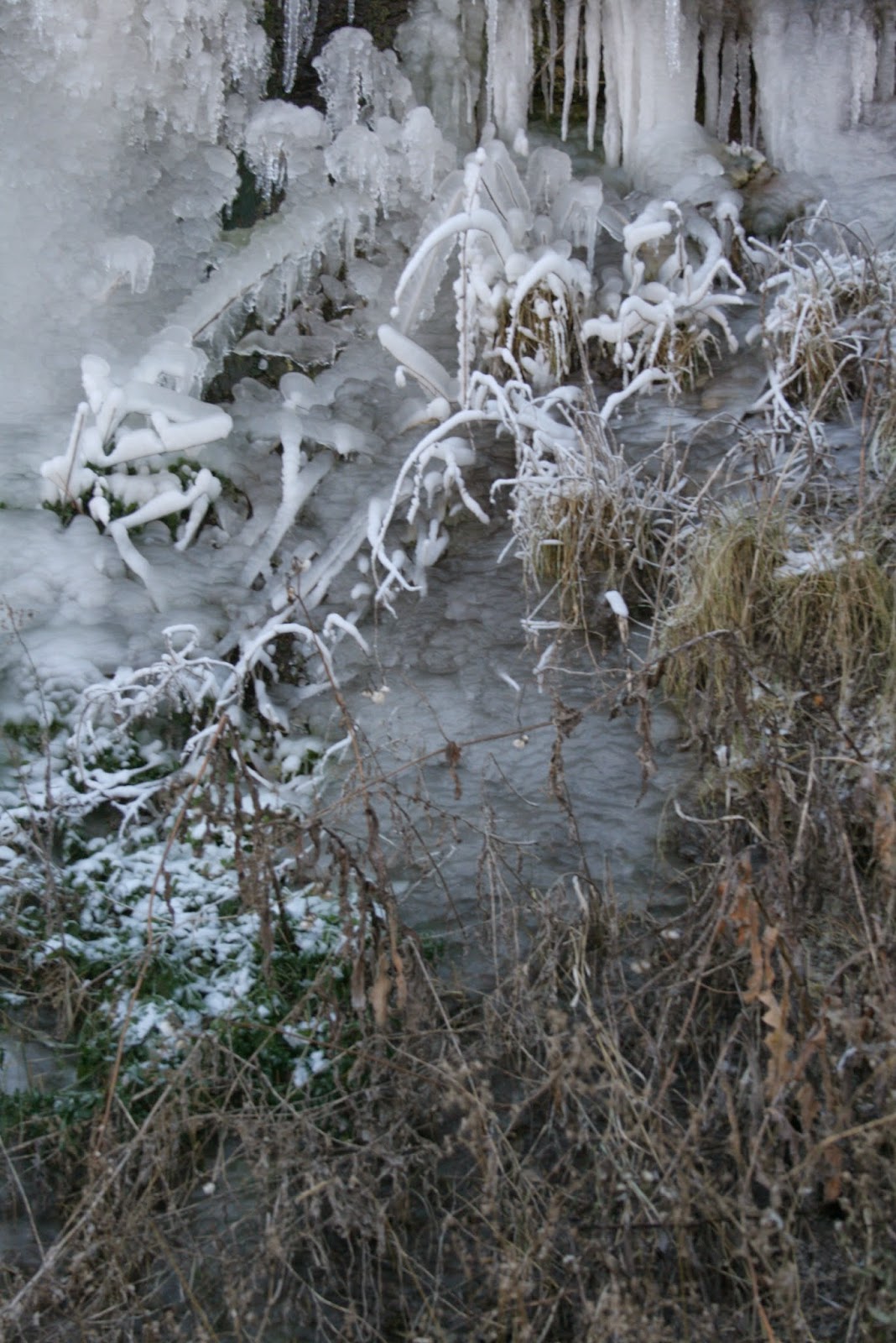 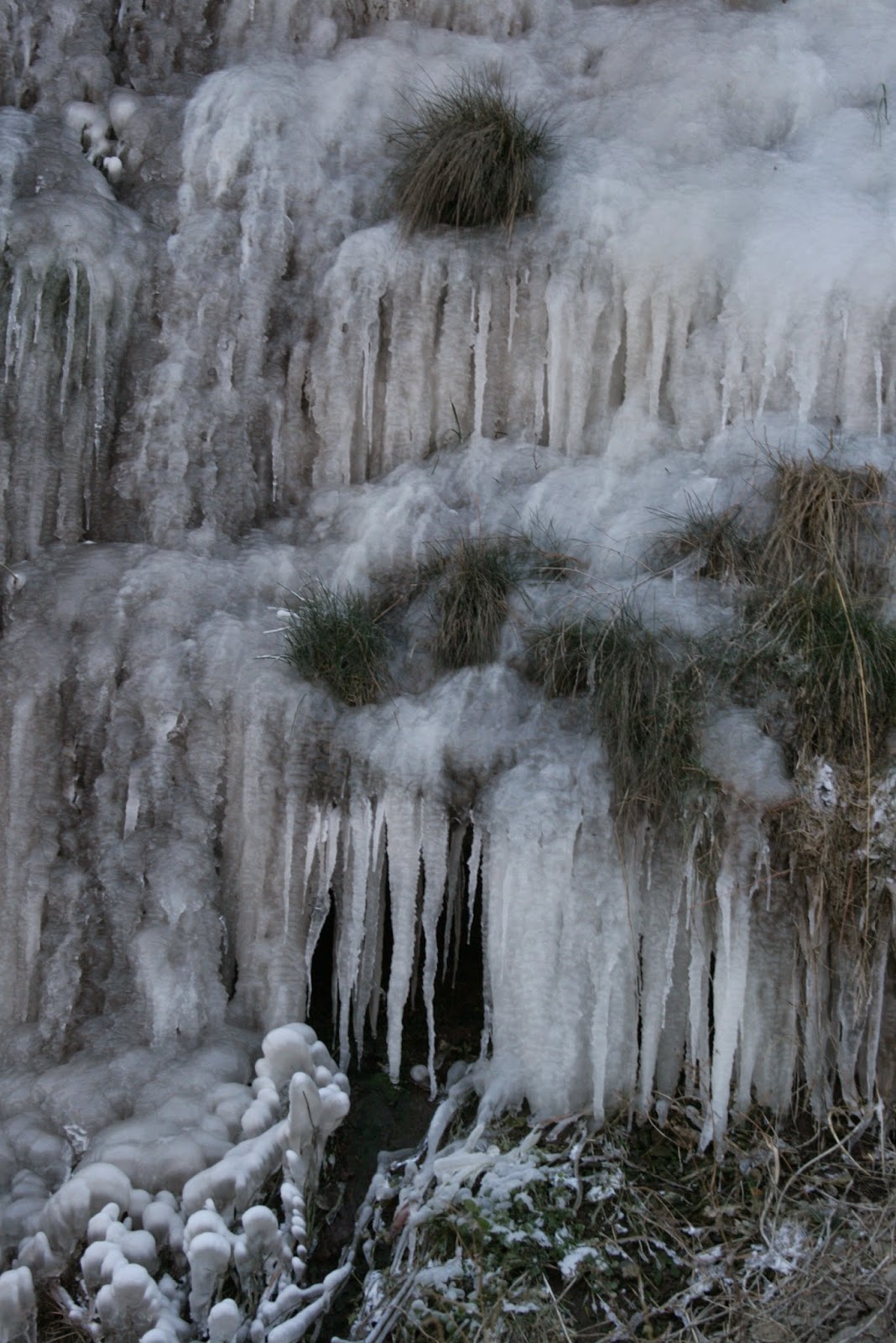 We skirt Skaha Lake, coming into Penticton, the hills still blue and misty 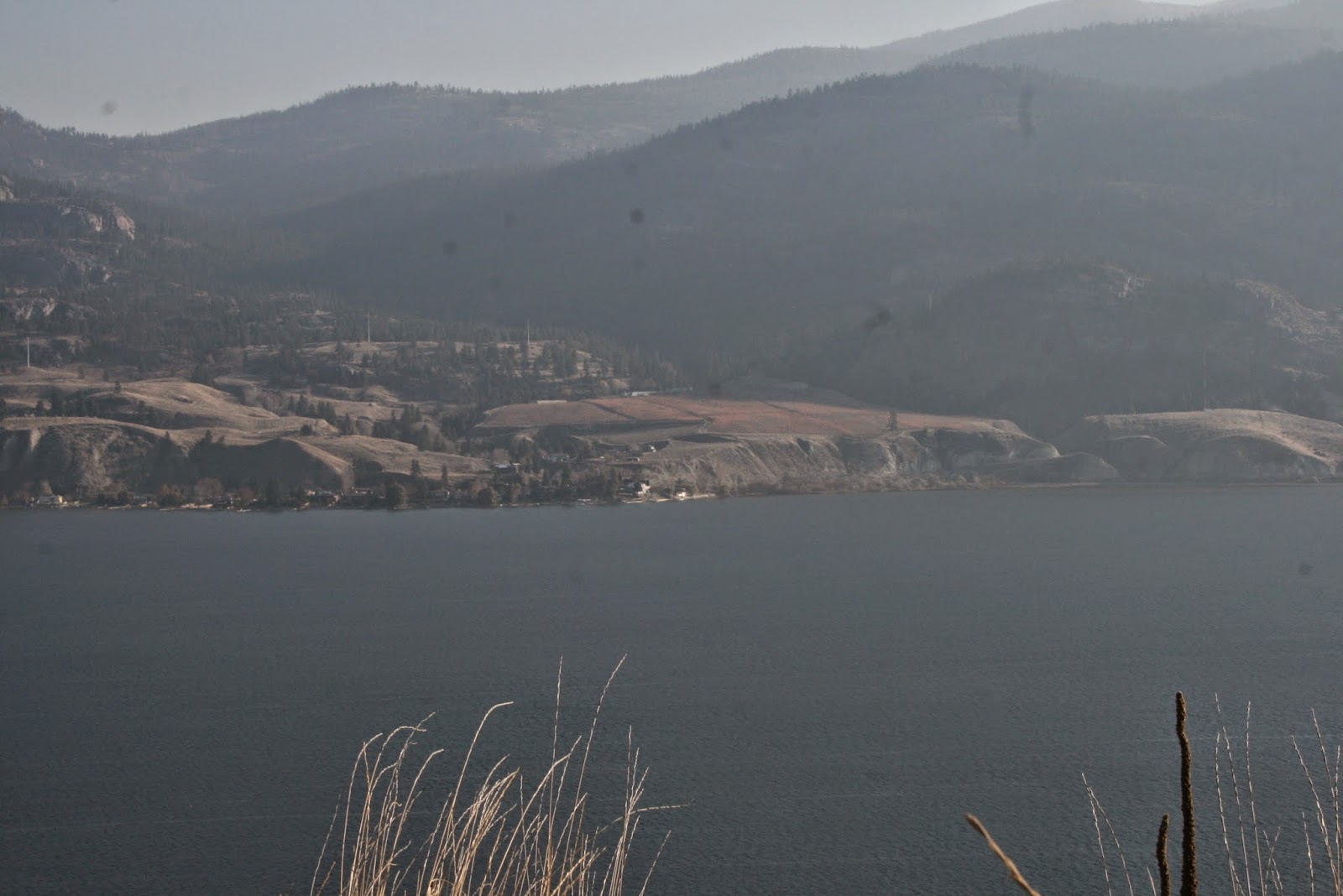 But it is warmer, and the water is a clear and beautiful blue. We do our business, visiting Debbie's Diner for coffee and a visit with family.
We pick up the knobs for the drawers on the new Captain's Bed
I have just bought
(me now being the Captain, I guess)
and some Medi Cal food for Callie,
who has a great passion for it
and it's so good for her bladder.
I found the right size bag for the vacumn cleaner,
and then we went for lunch - delicious.
At the Pasta Factory.

I had Creme Brulee for dessert!!!!!

On the way home we saw two ducks waddling down the city street, -
as we passed them they turned into a walkway leading to a house.
Home????? 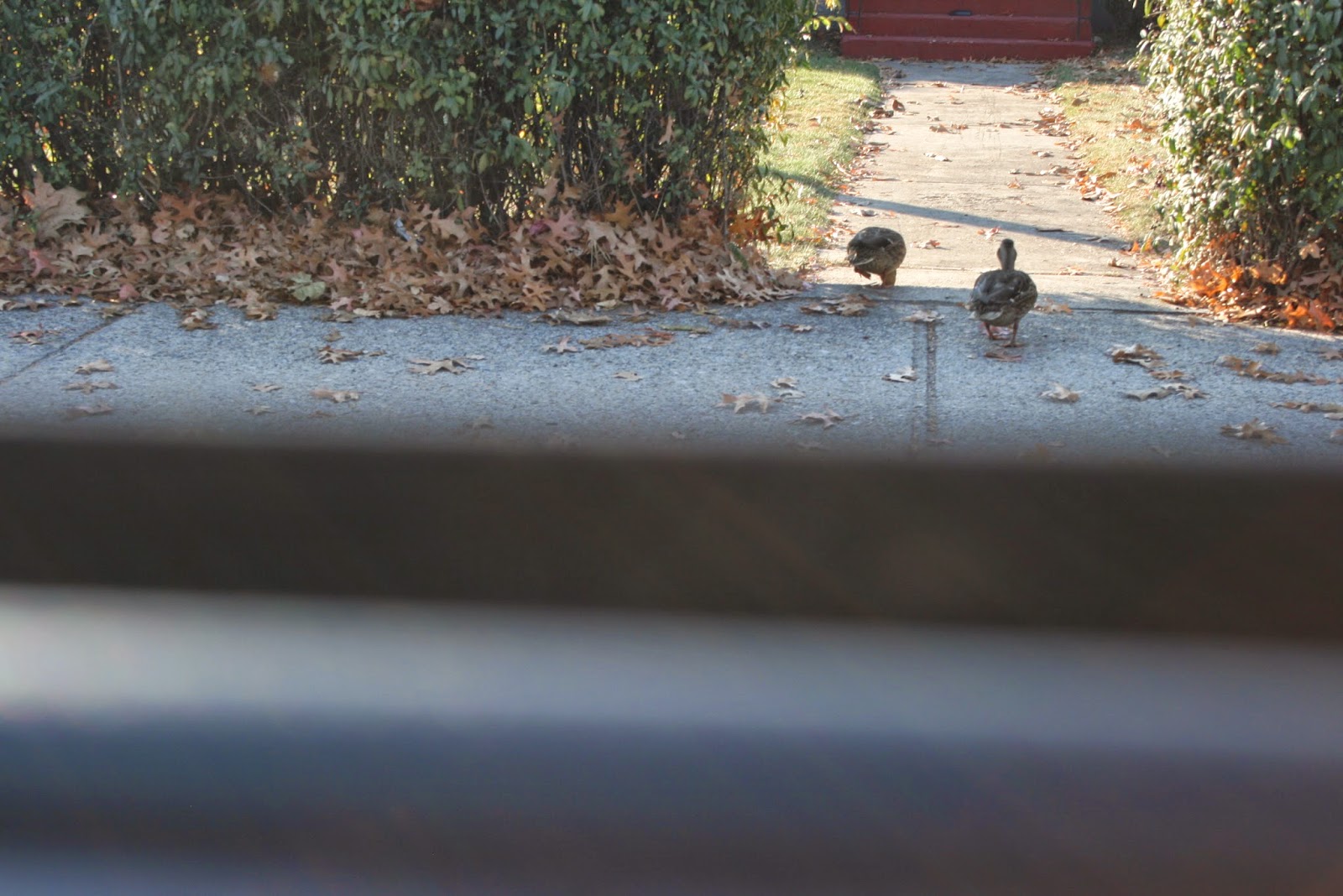 As we went down the Channel Parkway
we saw large numbers of the geese
who stay around all year
and cause great consternation to people and places with lawns.
They were enjoying the water which joins Okanagan Lake to Skaha Lake,
free at last from all those pesky summer visitors
who raft down the channel,
probably drinking beer and playing loud music. 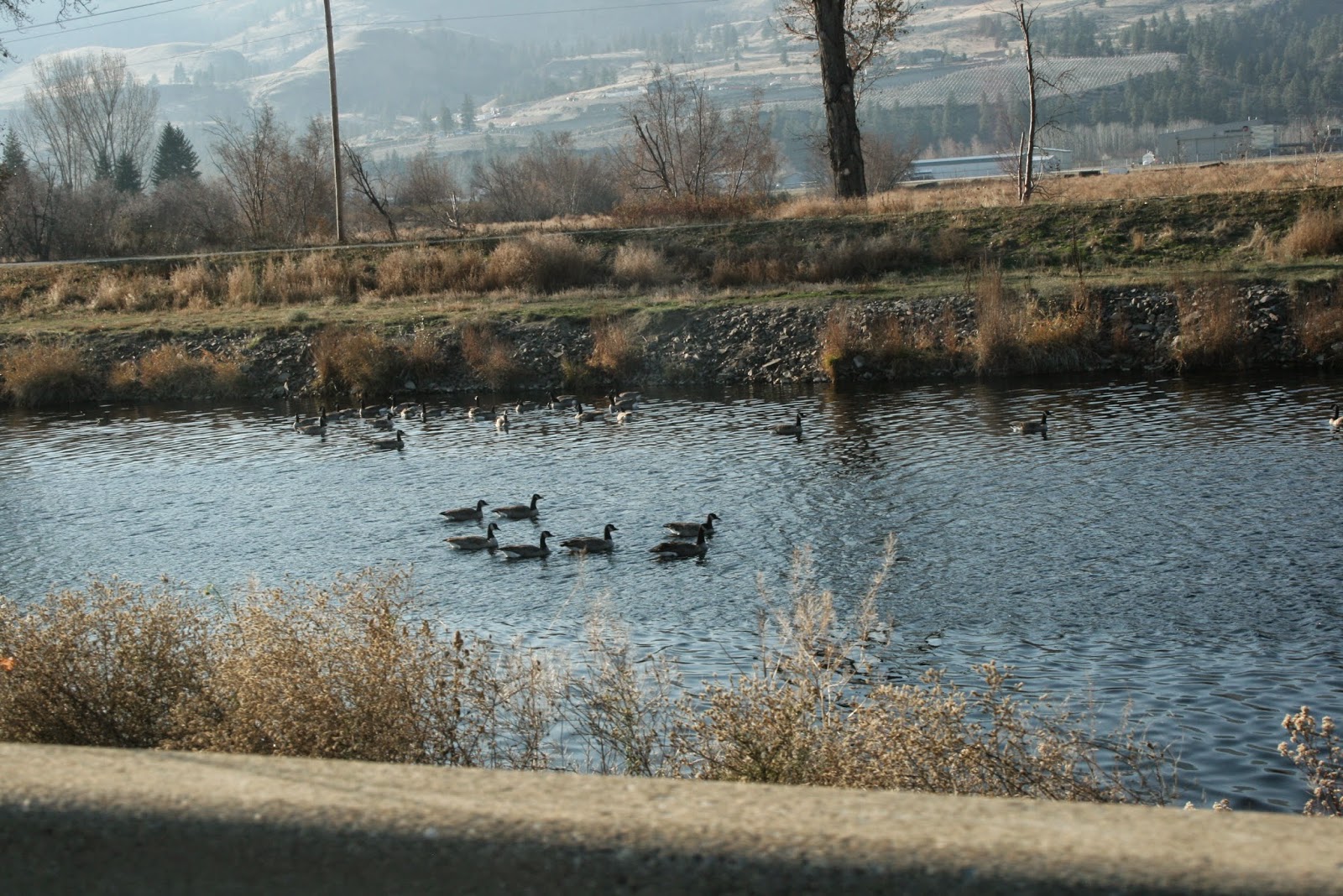 As we drive along the beach highway
I was able to get a nice picture of the hills, leaving Penticton,
but was not quick enough to catch the lovely view of blue hills,
in the misty distance, as we rounded the highway into Kaleden. 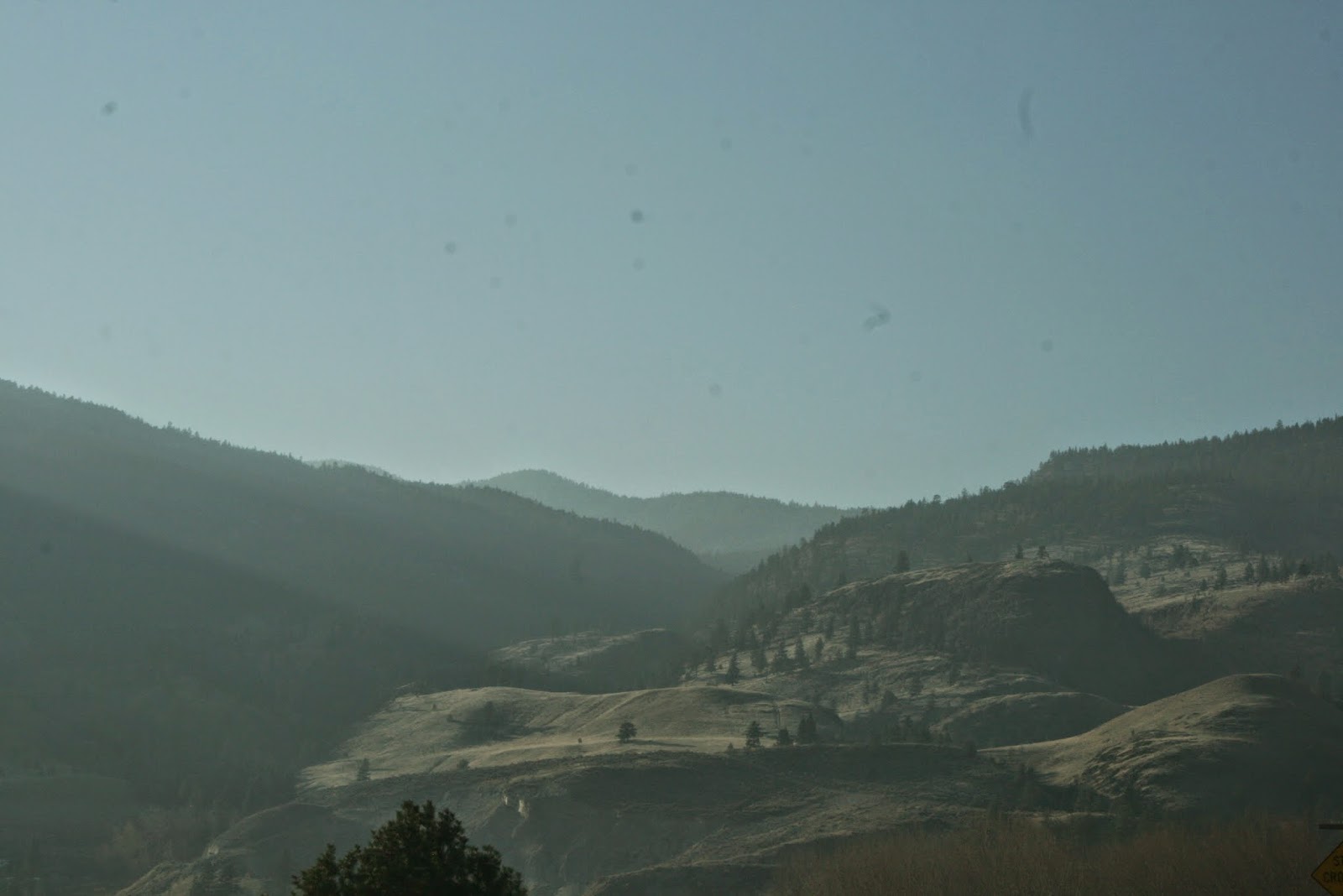 I remember when Penticton was a sleepy town,
and the stores were small
and the restaurants full of people one knew
and chatted with.
Not any more....

Today I was introduced to a very sophisticated washroom
in the Pasta Factory where we lunched,
and the facilities all start and stop by themselves, -
don't get around much any more to learn about these things!!!!


ABC Wednesday
The letter is R


I went to sleep last night, thinking of the letter R, and what words and thoughts
and things it stands for.


I woke with my heart heavy with Remembrance and the words that came to my mind were such somber ones, such as Regret, Remorse, Recrimination.

Remenbrance is not always sorrowful, and after I had my breakfast and my coffee,
and the sun came out,
other R's came to mind.

Reality, Rejuvenation, Reincarnation, Reconciliation, Romance
and then there is always hope of the Great Reveille
which I try Resolutely to believe in.

This, of course, was not what Housman had in mind when he wrote his poems for
The Shropshire Lad,  - nor was his Reveille a military one,
but it rather appealed to me as a way to wake and carry on.....

Wake: the silver dusk returning
Up the beach of darkness  brims,
And the ship of sunrise burning
Strands upon the eastern rims.

Wake: the vaulted shadow shatters,
Trampled to the floor it spanned,
And the tent of night in tatters
Straws the sky-pavilioned land.

Up, lad, up, 'tis late for lying:
Hear the drums of morning play;
Hark the empty highways crying
'Who'll beyond the hills away?'

Towns and countries woo together,
Forelands beacon, belfries call;
Never lad that trod on leather
Lived to feast his heart with all.

Up, lad: thews that lie and cumber
Sunlit pallets never thrive;
Morns abed and daylight slumber
Were not meant for man alive.

Clay lies still, but blood's a rover;
Breath's a ware that will not keep.
Up, lad: when the journey's over
There'll be time enough to sleep.

And in Remembrance of the courage and bravery of the men
who suffered the battle fields
and gave their precious lives to defend our freedom,
a Poppy from the fields of Flanders, laid Reverently upon their graves. 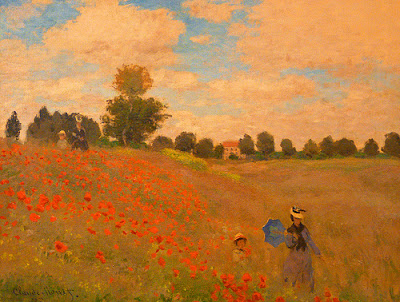 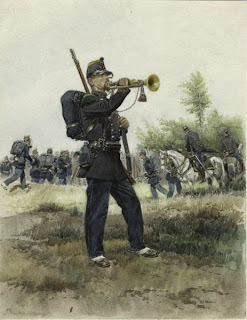 More Rs here with thanks to Roger and Denise.
Posted by Hildred at 1:46 PM 8 comments: