Leisure Activities for the Octogenarian

Yesterday afternoon. A little post lunch nap, but we were confined to the air conditioned house for the rest of the day as temperatures soared to 36C outside. What to do?

'You and I could do it this afternoon,' said Husband, seducing me with visions of pleasurable achievement. Well, why not.....

The new elevated toilet for Husbands little cubby hole bathroom arrived the other day. A piece of cake to take the old wee child's facility away and install the manly equipment in its place.

And so it seemed at the beginning - a piece of cake and a nice companionable activity as everything progressed smoothly. Removed the old bowl and tank and man handled it out to the lift for disposal (no, I will not plant it with flowers in the garden!)

Did the necessary cleaning up and brought the new bowl into the bathroom, laid it gently on the floor, opened the new wax seal and set it down carefully. Nothing to it!! Husband examined the flange bolts and decided they would do to secure the toilet, so we lowered it carefully into place, wiggled and pressed it, and when all seemed firm we retrieved the tank and bolted it to the bowl.

Things didn't seem quite as jolly, suddenly. Because of post polio syndrome Husband does not kneel and rise with ease, and if he has to get down into a prone position to deal with nuts and bolts it may take him five minutes to get back up. So I was appointed the task of screwing the nuts on to the bolts that hold the tank firmly atop the back of the bowl.

This required that Husband reach down inside the tank, holding the head of the bolt firm with a screwdriver, while I squeezed down beside him and twirled the bolt (clockwise, anit- clockwise?- how's an apprentice to know?)

That accomplished we had still to secure the flange bolts. 'Go and get the three legged stool that Fred made for you' said Husband. Placing it on the shower floor and lowering himself on to the stool with some difficulty, he continued his instructions. 'Hand me the nuts' said Husband. 'The new ones or the old ones?' said I?

I handed him the old ones first - after all, they were to go on the old bolts. No joy, - they didn't screw on. So I handed him the new ones, - and still no satisfaction. (After supper I was told I had handed him the tank nuts, instead of the flange nuts, and that I was in danger of losing my job!!!!)

Well, from here on the afternoon's entertainment took some bizarre twists.

First we had to remove the tank bolts, and then the toilet, thus ruining the wax seal.

It became apparent that we had to try to remove the old bolts and replace them with new ones....

Whilst working on the flange bolts and quietly cursing the idiot who had put them in so that they were not removable in the usual manner, suddenly the three legged stool slipped and slid, and husband was jolted to the floor.

At the same time he was so unceremoniously dumped the screw driver flew out of his hand, sailed through the air, and down the waste hole!!! (later retrieved with a magnetic stick)

The afternoon's entertainment was certainly taking on unforeseen heights of amusement as Husband inched himself across the tiny bathroom floor to where he could get some leverage to lift himself. At that point we did laugh at the ridiculous positions we found ourselves in, -and the dog turned away and went down the hall with a smirk on his face!!!

All these jolly events had made time just fly by, and we were well into the happy hour. Time to have a drink, a peanut butter and honey sandwich and a little Scott Joplin.

This morning we are on our way to town to buy a new seal, and Frank is going to come and help conclude the project. So I may not get my plumber's assistant papers after all.......

I am sorry I have no pictures to help depict our adventures in the bathroom. I asked husband if he would care to re-enact so we could record for posterity, but he was not so inclined...
Posted by Hildred at 7:03 PM No comments:


After the heat of the day a cool summer evening... 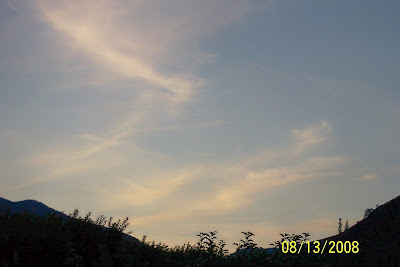 The garden glistens with a welcome sprinkling... 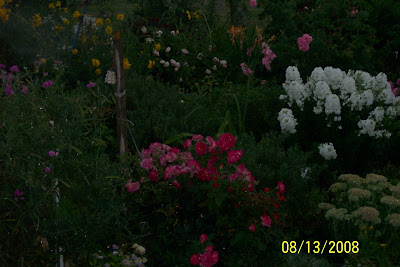 - the moon, a pearly button at the top of a pink jabot, tucked into the folds of the coming night. 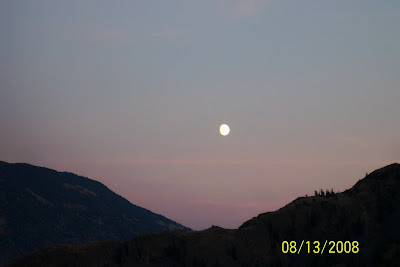 Over the hills and down into the Okanagan valley on the most pleasant of summer days. 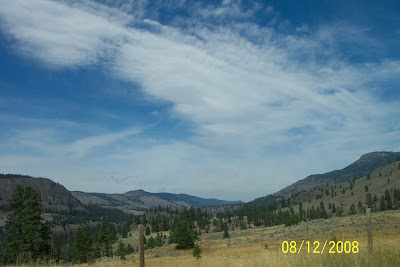 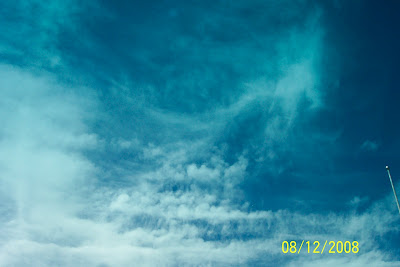 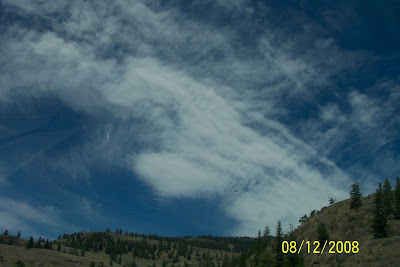 -and off into the west vapour trails mix with the clouds to make a criss-cross pattern. 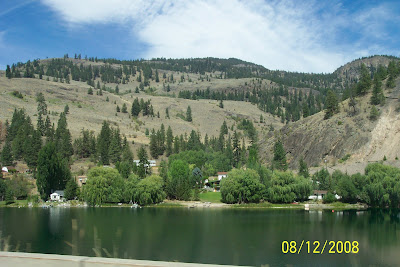 ...past the little lake where a small community now surrounds the water where Husband fished with his father when he was a lad 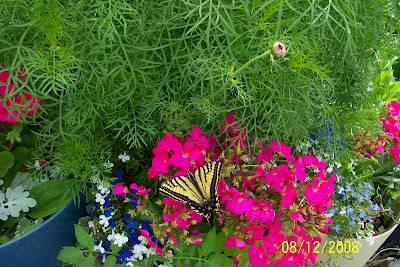 ..home again to find a busy butterfly intensely working on a pot of geraniums. 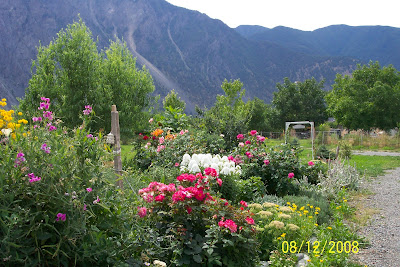 and the garden, waiting patiently to be weeded and watered.

A lovely day, - only dark cloud was finding the Wool Shop closed. ....a favour to my bank balance.
Posted by Hildred at 9:09 PM No comments: