November crawls on, - through the fog and the mist, the frost and the dismal weather. A most lachrymose month.

A few events brighten up its days momentarily. I get lost in Christmas lists. It is a month of birthdays, celebrating the presence of precious children in our lives, - I rejoice in talking to granddaughters who rejoice in anticipating the arrival of first-borns, and it is good. But still, but still - it is a most depressing month as far as the darkness closing in, the remnants of this years garden, frozen and sad as they stand guard over next year's underground promises. Alack a day....

I turn to books for comfort and distraction.

Tucked into the space between the mattress and the bed stand are a couple of Christmas cookery books and a magazine or two. But when I reach down for some last minute reading before sleep I most likely bring up one of two books.

The first is "What's so great about Christianity" - a rebuff to the atheistic books of Hitchen, Dawkins, Harris and ilk. I seem to be of such an age that I have absorbed all the questions, and the answers are familiar to me as well. On both sides of the fence.... But I read on, hoping that something will convince me that Dinesh D'Souza is right when both he and Alister McGrath speak of the Twilight of Atheism. Is Antony Flew a forerunner of the converted atheist?

Waiting for me at the library is The Spiritual Brain by Mario Beauregard and Denyse O'Leary, a neuroscientist's case for the existence of the Soul. Denyse O'Leary writes a blog that I haunt daily, - the mindfulhack.blogspot.com, for information and inspiration.

What scares me most about this whole subject of Christianity vs Atheism is the increase amongst mainline churches of proponents of the incredulity of Jesus being the Son of God. When I read Marcus Borg on the Jesus Seminar, and when a former Moderator of a mainline church declares publicly that Jesus was ONLY a man (although a GOOD one), I wonder at the inroads that are being made by the secular world into the sacred world..... I understand that there has always been a segment of the Christian world that has had doubts about The Trinity, and the part that Jesus plays in it, but it seems to me it has escaped the bounds of theology and is being promoted amongst people who are at the best apathetic towards Christianity, and quite prepared to accept any startling secular views that discredit it.

Stephen W. Sather, reviewing the Heart of Christianity by Marcus Borg, has this to say:

"Borg is very up front about the fact that his book reflects a conflict between "two comprehensive ways of seeing Christianity as a whole." While Borg claims to reclaim the "heart" of Christianity, this is definitely not the faith of our fathers. Instead, he embraces what can be viewed as Christianity lite. Much, if not most, of the supernatural is rejected. What is retained is social activism based on the non-supernatural teachings of Jesus combined with a vague sense of spirituality. "

I note today that Marcus Borg is a Keynote Speaker at the Epiphany Explorations to be sponsored by the United Church of Canada in Vancouver, in January. Close to home......

Well, if I get too despondent about this situation I can always reach for the second book that lives between the mattress and the bed stand, - another delightful Isabel Dalhousie story by Alexander McCall Smith, whose books I find a joy to read, - The Careful Use of Compliments.

I also brought home an old book of Nora Ephron's the other day, rescued from the shelves at the Bargain Centre. I downloaded a later book of hers - "I feel bad about my neck" - from our e-book library service, and I am looking forward to more of her wit and humour...

And to further anesthetize my brain when it gets too concerned with spiritual matters, I have also made a little note to order from the library some of the books of Terry Pratchett, who says, - and I quote -

"The trouble with having an open mind, of course, is that people will insist on coming along and trying to put things in it." 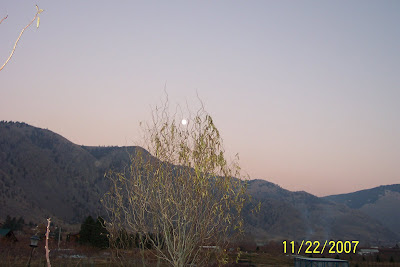 Compensation for all the dreary days - the curly willow at sunset, with the porcelain moon shining through the topmost branches.

A little November Hiatus while Husband and I said a lingering farewell to those traumatizing colds that kept us confined to barracks for a long while...


and then a week of preparation for,- ta da, the 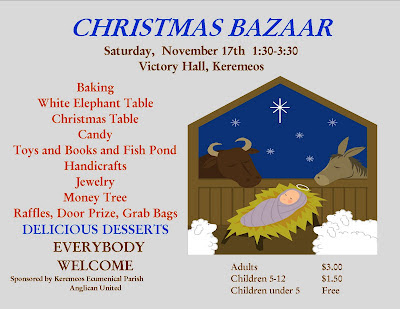 Everyone who was supposed to help on our table got sick, so Mary and I ended up tending the White Elephants. 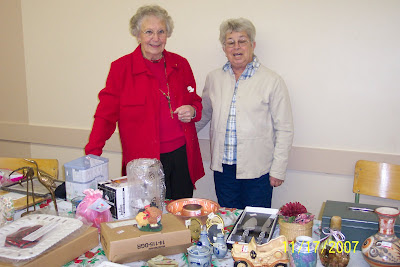 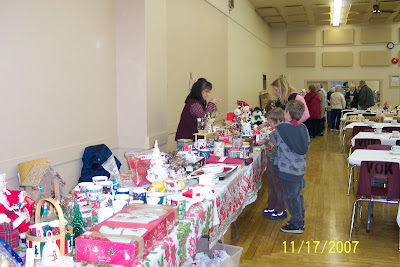 I see advertisements in newspapers and magazines for terribly sophisticated big city Bazaars and Christmas Craft Sales, and our traditional Church Bazaar is very small-town by comparison. However, it is an outreach into the community that has been welcomed annually as Christmas approaches for at least the last forty years. Sometimes the ladies who stand behind the tables come to church, and sometimes they are volunteers from the community who come to help and have fun.

There is a great rush of buying after the Bazaar is officially opened, and then everyone settles down to coffee and tea and the same dessert they have been enjoying for almost the last ten years. It is so good, why change?

Here are the ladies who two days before put together this simple recipe that is popped into the fridge where it metamorphs into a wonderful Napoleon type French Pastry with delicious sauce of your choice. 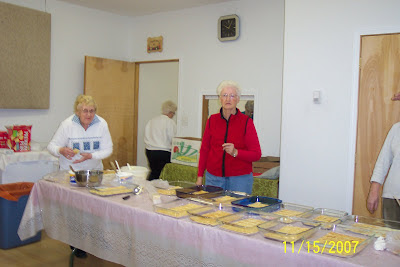 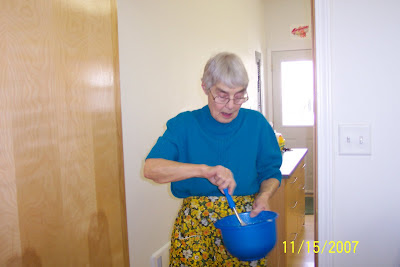 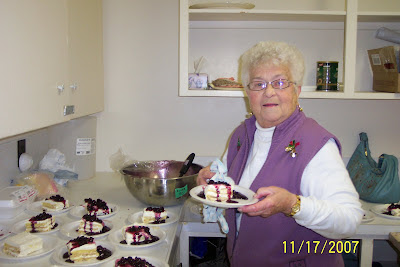 The recipe for this fabulous stand-by.......

Line the bottom of a 9x13 inch pan with unsalted soda crackers.

Pile on one third of a bowl of instant pudding, flavour of your choice.

Smooth over one third of a bowl of softened Cool Whip.

Repeat until there are three layers, - crackers, pudding, Cool Whip. Cover and pop into the fridge for forty-eight hours.

And voila - a dessert fit for a king and just perfect for a Country Christmas Bazaar.

Or a Christmas Eve gathering, - or a large family dinner, - or just anywhere that you want to earn accolades for a delicious and light dessert.

Posted by Hildred at 5:55 PM No comments:

Labels: recipe dessert Bazaar
Newer Posts Older Posts Home
Subscribe to: Posts (Atom)
"Thou knowest not what a day may bring forth." —Proverbs