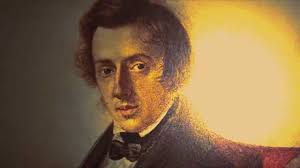 In my quest to fulfill my Bucket List by playing once again all my many CD's I found in the stack today a cherished disc of a Chopin Program performed by Gwendolyn Moore, of Turtle Island, Washington, and I was immediately flooded with memories of the day my sister-in-law took me along when she went for a music lesson under Gwendolyn's tutelage.  A lovely day which ended with me buying two of her discs, one a program by Schuman, and the other a beautiful performance of Frederick Chopin's music  -  Chopin with a "C" - perfect!

Considered Poland's greatest composer, Chopin was born March 1st, 1810, growing up in a middle class family.  He was a child prodigy who  published his first composition at seven.

In Vienna, where he had made his performance debut in 1829, the audiences loved his highly technical "yet poetically expressive' playing.  In 1832 he moved to Paris, and although his delicate style didn't always enthrall the large concert audiences who were used to Franz Schubert and Beethoven, Chopin soon found employment as as recitalist and teacher.


Though Chopin had youthful love affairs and was at one time engaged, none of his relationships lasted more than a year, - until he met the French novelist Amantine  Lucile Aurore Dupin, aka George Sand.

But that's another story for another time......

Here is a lovely recording of Chopin's Nocturne in E Flat Major and I'm sorry I don't know the name of the performer, but enjoy her beautiful rendition.

For more exciting Cs visit here at ABC Wednesday, with thanks to Roger, Denise and all their Creative helpers.
Posted by Hildred at 8:33 PM 12 comments: