I couldn't think of any really exotic fruits that begin with E, or any commonplace ones that would be of interest..  And Mister Google was not much help when I went to see what he had to offer.

So I left off thinking about fruity E's and went back to sorting my music, which was the BIG plan for the day. I was really looking for a copy of Nola, being in a nostalgic mood, but instead found just one page of Narcissus  from Water Scenes Op. 13. No. 4.composed by Ethelbert Nevin.  This was equally nostalgic, being a piece that both my husband and I played in early years.

I can remember being thrilled when I got to the point in piano lessons when my teacher introduced a few more interesting pieces than what could be found in the Toronto Conservatory books, and Narcissus was one that really appealed to me, - the idea of playing with crossed hands seemed terribly sophisticated and exciting at the time!!!!

You will be asking why I am going on about Narcissus, - no E's there!  Ah yes, it was written by Ethelbert Nevin, a short lived but very popular composer of the late 1800's (he died in 1901 at the age of 39 - probably from a stroke although it was reported as apoplexy ). Ethelbert Nevin wrote romantic salon music for piano and other instruments - among them  Barcarolle, Ophelia, Water Nymph and Narcissus all from Op. 13, and many songs - The Rosary (my mother's favourite), and most famous of all, Mighty Lak a Rose.  Listen here to Paul Robeson sing it - sends shivers up my spine.

He was also a gifted concert performer and in recognition of his talents and his contribution to the musical world of the late 19th Century a 1940 ten cent stamp was issued in his honour. 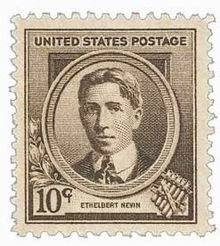 Here is a nice performance of Narcissus, - at least I think so.  Many, I found, play the piece much too mournfully but this is a more lively rendition.  There is another Youtube performance by a young Asian girl which I found very endearing, but Youtube didn't present  this as an option, alas.  She crossed hands with much elegance and presence and reminded me of how impressed I was with that technique!!!

Grace Notes, in drag, also plays Narcissus on Youtube,
but more in the style of ragtime, which is rather naughty, but you might enjoy the nice swing.

For more interesting E's visit here at ABC Wednesday and give thanks to Roger and Denise and all 'elpers.